If you’re looking to make a reggaeton hit in 2020, you can start by calling Marco “Tainy” Masís. Over the past 15 years, the producer has fashioned arty, chart-topping tracks for the genre’s biggest stars — from J Balvin and Bad Bunny to Wisin & Yandel — as well as spilling over to the Angloverse with Justin Bieber’s recent ambient-R&B cut, “Habitual.”

Now, Tainy has his sights set on solo stardom with his forward-thinking debut EP, The Kids That Grew Up on Reggaeton. In seven tracks, he outlines the shape of reggaeton to come — with vocal assists from a new generation of Latin artists who’ve made their own strides towards global pop fusion, including Kali Uchis and Fifth Harmony alumna Lauren Jauregui. “I’m not comfortable with normal,” says the 30-year-old producer, surrounded by platinum plaques and Takashi Murakami throw pillows in his Miami studio, and wearing a Metallica T-shirt and industrial steel chains around his neck. “Growing up in Puerto Rico, we had so much music coming in, so many influences. I want to keep expanding — try this, fuse it with that, and see what happens. Not all artists are looking for that. But little by little, I’m finding [artists] who are ready to take the risk.”

Tainy’s career began at age 15, when he became a protégé of Luny Tunes, the production duo who dominated reggaeton’s 2000s boom. He met them through another acclaimed producer of the era, Nely, who attended the same local church; they invited Masís to share his own homemade beats at their studio, and soon he was working on the opening track to their influential 2005 compilation, Mas Flow 2.

RS Recommends: How to Bag the Briefcase That Co-Stars With Brad Pitt in 'Bullet Train'

“I was lost in time,” Masís says. “My mom [was] waiting outside for hours, with my little brother and stepdad in the car. I came outside and told her, ‘Luny wants to sign me.’ They wanted to have a meeting with my mom because I was underage. [Luny] took us to dinner and we signed the papers.” 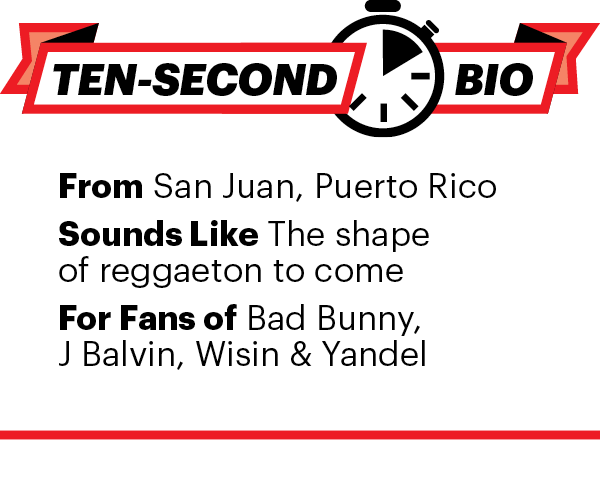 From then on, he was credited under the name Tainy — a name he’s not only stuck with, but made larger than life. (He’s previously explained that he added an “a” to the word “tiny” so that Spanish-language media wouldn’t pronounce it to rhyme with “eenie.”)

As Tainy, the young producer spent the aughts building a mighty portfolio in reggaeton, overseeing tracks by superstars like Don Omar, Ivy Queen, and Daddy Yankee, most notably on the 2006 follow-up to Mas Flow 2, titled Los Benjamins. In 2009, at the age of 20, Tainy won his first Latin Grammy for his work on the song “Abusadora” by Wisin & Yandel. Even then, he remained well attuned to the world outside of reggaeton; the sticky dance floor bounce of “Abusadora” was cut from the same cloth as Timbaland’s work with Justin Timberlake on FutureSex/LoveSounds. “The way he did everything, it had shock value,” says Tainy of Timbaland. “It really blew my mind. I thought, ‘What if I started using different sounds? What would a reggaeton drum pattern be like with a kick and snares?’ Thanks to him… I started to experiment.”

As Tainy evolved his own sound, reggaeton at large began to evolve, too. Following the crossover pop watershed moment of Daddy Yankee and Luis Fonsi’s reggaeton lento, “Despacito,” the genre was primed for maximum mainstream exposure. Yet instead of capitulating to the new demand for palatable, pop radio reggaeton, Tainy decided reggaeton needed to get a lot weirder — as heard on J Balvin’s Vibras, Bad Bunny’s debut X 100pre, and the two stars’ joint 2019 venture, Oasis. With these records, Tainy established himself as the spiritual link between first- and second-wave reggaeton.

When making the songs he produced for Bad Bunny’s back-to-back albums released this year, Yo Hago Lo Que Me Da La Gana and Las Que No Iban a Salir, Tainy revisited some of his earliest influences. Take the graphic garage party-turned-sex romp theme “Safaera” — “There were eight different tempos in that song,” says Tainy —  or the trap-metal surge of “Hablamos Mañana,” which guest stars Argentine MC Duki and Chilean rapper Pablo Chill-E. Recorded with a live guitar and drums, the song ramps up gradually into a volcanic screamo breakdown, then culminates in the atmospheric comedown of closing freestyle track, “<3.”

“When I first met Bad Bunny,” says Tainy, “we talked about a lot of things we liked. Rock and punk were a part of that connection. Us being fans of Limp Bizkit, Blink-182, and Linkin Park. I’ve never had the chance to explore that side of me with anyone else. So I was like a little kid, going crazy! Not everybody gives you those chances.”

Now, with The Kids That Grew Up on Reggaeton, he’s taking chances on fresh new voices in Latin music. Along with music executive Lex Borrero, Tainy has co-founded a creative incubator called Neon16, which serves as a label, recording studio, and management agency for young Latinx artists. New signees include vocalists Kris Floyd, Dylan Fuentes, and Álvaro Díaz, who were all given a spotlight in Tainy’s recent EP. And even though he’s spent the past two months in quarantine, Tainy is no less a workhorse than before; he’s already begun work on his sequel EP, which is due for release later this year, and even more stacked with fresh talent. “I want to pay it forward,” Tainy says.