How many colors can you fit into a single syllable? For Barcelona singer-songwriter Rosalía Vila Tobella, the range is near infinite. Where her 2017 debut, Los Ángeles, was painted in gradations of slate, her new follow-up, the flamenco-pop fusion record El Mal Querer — which loosely translates to Toxic Love — is dabbled with bursts of red, gold and saffron.

“I respect the flamenco tradition,” Rosalía tells Rolling Stone while seated inside Sony Music’s Manhattan headquarters. Wearing a pastel yellow utility jumpsuit and sneakers, she leaps out of her seat at times, excitable with a genuine passion for her craft. “I love flamenco,” she continues. “It’s very difficult music to sing. But I think of any genre as a snow globe — you don’t admire it for its stillness. You have to shake it up and see how it explodes.” 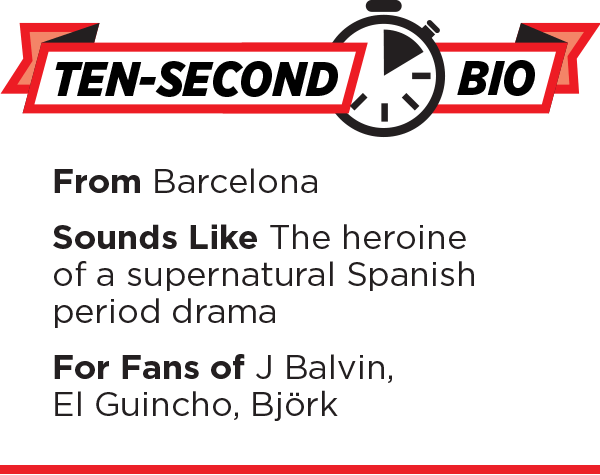 By using the time-honored Andalusian art form as her canvas, Rosalía brings high drama to a Spanish-language pop world that has otherwise stayed close to the laid-back sensuality of upbeat, Caribbean-sourced sounds like reggaeton and dembow. Yet she knows better than to work against the rising dominance of the urban mainstream; in fact, she welcomes those elements into her songs, where both 808s and palmas, or percussive hand claps, cradle her vocal melismas with ease. Some critics have voiced concerns over a Catalan artist, a northerner, taking so much liberty with a folk genre that evolved from the amalgamation of Jewish, Romani and Moor diasporas in the south of Spain. Rosalía, however, insists her interpretations are not born out of any disrespect, but out of a natural curiosity for the medium itself.

Rosalía Explores the Trappings of Fame on Deluxe Edition of 'Motomami'

“I learned the tradition. I learned all the rules,” says the 25-year-old, who studied flamenco for eight years under local legend José Miguel “El Chiqui” Vizcaya, as well as at the Catalonia School of Music. “But I have to be transparent with how I understand flamenco here and now, with who I am, with my references, with my age, with the moment I am living, you know? The classical basis is so important to me. But from there, I want to have freedom.”

Such a formula, however unconventional, has worked wonders for the young singer and multi-instrumentalist. Her flamenco-hip-hop hybrid track “Malamente” won two Latin Grammys earlier this month (out of an impressive five nominations) — Best Alternative Song and Best Urban Fusion/Performance — knocking out “Mi Gente,” the global #1 hit by Colombian reggaetonero J Balvin. There were no hard feelings, though; Rosalía collaborated with Balvin on his chart-topping 2018 album, Vibras.

For the making of El Mal Querer, she called on her then-boyfriend, Madrid rapper C. Tangana, to help co-write lyrics for eight of the 11 tracks — and rang up Pablo Díaz-Reixa, a.k.a. Canarian psychedelic-pop producer El Guincho, to co-produce the LP. “Most guys I [have worked] with, they don’t empower girls,” she says. “They prefer to have the reins in their hand. Pablo told me, ‘You are a producer… You lead your project.'”

After accepting her second Latin Grammy in Las Vegas, Rosalía shouted out not only her collaborators, but some of her favorite female artist-producers, including Kate Bush, Lauryn Hill, Missy Elliott and Björk. “These women paved the way for me to be here,” she told journalists backstage while clutching both award trophies, down to the tips of her perilously sharp, bejeweled nails. “I’m going to have to keep fighting until I find the same number of women in the studio as there are men.”

Rosalía consistently stresses the importance of woman power, and not just in her music. It’s also apparent in her all-woman support team, which includes manager Rebeca León, her mother, and her sister Pilar, better known as the stylist Daikyri. (“Playing with clothes, taking pictures has always been our way of having fun,” says Rosalía.) Together, through Rosalía’s image, the sisters amplify their vision of a strong femininity — one that’s frilly and playful, but incredibly driven and perhaps even liable to do something crazy if given the chance. Ensconced in halos of tulle, rhinestones and faux feathers, Rosalía and her all-woman dance troupe march onstage in white sneakers and bobby socks for most performances. At a recent show in Madrid’s Plaza de Colón, the ladies rolled out an ATV, a favorite accessory of the young star’s, for the song “De Aquí No Sales.” Perched atop the vehicle, a single tear rolled down her face as she revved up the motor for her screaming fans. “Super aggressive,” she says in English, her brows furrowed for effect.

The idea for El Mal Querer dates back to her university thesis. The album is a modern retelling of Flamenca, a 13th-century Spanish novel about a young bride kept imprisoned in a tower by her possessive husband. “I dread when you go out on the streets, smiling/Because everybody can see the dimples on your face,” she sings in “Pienso en Tu Mirá” — sung from both the vantage point of the jealous lover and his prisoner. Striking lyrics set the scene for more striking visuals: In the video, directed by Madrid’s Nico Méndez, male gangsters follow Rosalía with an arsenal of weapons aimed at her neck; in subsequent scenes, she loads her own rifle with the eyes of a bull.

“The visuals are there to enhance my own radical approach to music,” she explains. “I [use] the Spanish cultural imaginary: My town is very industrial, so truck drivers are part of my imaginary. My grandmother took me to mass on weekends — I have memories of all that. I use all those cultural elements that are so present in my society, the Spanish society [in which] I grew up.”

Anglophone pop influences show up, too, as Easter eggs scattered throughout the album. “Di mi nombre/Cuando no haya nadie cerca,” sings Rosalía, a professed Destiny’s Child fan, in “Di Mi Nombre” — “Say my name/When there’s nobody around.” For her song “Bagdad,” which interpolates Justin Timberlake’s “Cry Me A River,” she reached out to the American pop crooner himself for permission to borrow the melody. “I was so excited because he never approves anything,” she explained on Beats 1. Meanwhile, her penultimate track, “Maldición,” features a sample from “Answers Me,” by 1980s avant-garde composer Arthur Russell.

“I have no prejudice about which music is better,” she says. “I listen to Vivaldi. I like Nick Cave. I love Travis Scott, James Blake, Lola Flores. Music can serve many functions. And so I listen to everything!”

As if Rosalía’s star wasn’t bright enough as a musician, next year may serve her a big break in Hollywood. Prior to dropping El Mal Querer, Rosalía filmed a scene in acclaimed Spanish director Pedro Almodóvar‘s upcoming film Dolor Y Gloria. She is flushed with exhilaration at the chance to act alongside heavy-hitters from his past films — such as Antonio Banderas and Penélope Cruz, with whom she shares her first silver screen appearance. And while she’s mum on the details of the film, she is more than happy to dish on Almodóvar, a Rosalía superfan who cast her after seeing her perform live in 2017. “Pedro is a good friend of mine,” she says. “He said that he always connected with the way I compose and the way I do music.”

“He used to come to the shows I did in Spain while I was touring with Los Angeles,” she continues. “I was singing this song, ‘La Hija de Juan Simon’ — it’s a very traditional song, from my [first] record. And I remember him crying!”