It’s a foggy May evening at La Marina, a bar and lounge nestled along the Hudson River at the northern tip of Manhattan. Behind the dock, sweltering Caribbean dance grooves blast from an outdoor sound system. Hundreds of party-goers amass behind the restaurant, sweating under the influence of perreo – a doggy-style dance that pervades the urban Latin scene. There’s a stylish yacht parked on the dock, from where Her Royal Reggaeton Highness, Ivy Queen, emerges and makes her way onstage.

“Mujeres dicen papi … o mami!” she shouts into her rhinestone microphone – intent to keep the egalitarian vibe going strong throughout her set. “Is there any gay pride up in this bitch?” On this night, she rocks her set in a blue silk Versace shirt and matching fedora, flanked between the crowd and a lavish throne bedecked in gold flowers. The Queen runs through the highlights of her career, which has spanned over two decades: potent dancehall-leaning rhymes that rep both female empowerment and street-style badassery. As part of the Red Bull Music Festival, the party – dubbed Hasta Abajo, or “get down,” after Don Omar’s 2010 hit – also brought to the stage a reunion of legendary proportions. Trailblazing beatmakers DJ Negro and DJ Nelson took the turntables, while underground fixtures like MC Alberto Stylee, Micol Super Star, and Ranking Stone took the stage – comprising the pioneering reggaeton collective the Noise.

Although this kind of party had once been illegal in Puerto Rico through the late Nineties, it is safe to say that the once-forbidden rhythm is now reaching its global peak. Just consider “Despacito,” the genre’s most recognizable song: clocking in at 5.1 billion views, the slinky club-tropical banger by Luis Fonsi and Daddy Yankee shattered records as the most watched video in YouTube history. This year it garnered Grammy nominations for both Song of the Year and Record of the Year – the first Spanish-language song to hold that honor. Moreover, its Justin Bieber remix topped Billboard Hot 100 at Number One, becoming the third mostly Spanish-language track in the nation to reach that level (Los Lobos’ remake of “La Bamba” was the first 30 years ago).

Then there are the mainstream pop juggernauts like Beyoncé, as well as longtime Latin pop veterans such as Enrique Iglesias and Shakira, now jumping on the reggaeton bandwagon – an unprecedented feat for the Afro-Caribbean-rooted art form. “I feel very proud to see artists like Ricky Martin and J.Lo singing over the rhythm that we created decades ago – the rhythm that wasn’t accepted,” says DJ Negro, pioneer of Puerto Rican reggaeton. “These are artists who had to evolve to maintain their relevance and involved actual reggaeton singers to make worthwhile hits.”

DJ Nelson first coined the term “reggaeton” in 1995, while busy churning out a solo release – potentially named Reggae Maratón, Vol. 1. It embodied the sonic characteristics we define as reggaeton today: 808 drum beats, tropical-flavored timbales, rap-styled, and a thumping dance sensibility. While chilling with a colleague talking about “Reggae Maratón,” he suddenly blurted out “Reggaeton!” And so his mixtape was titled Reggaeton Live, Vol. 1.

“[Reggaeton],” he explains, “can be traced back to when the Panama canal was being built and Jamaican labor was used. In the Sixties and Seventies, Jamaicans brought reggae music with them, and you saw Jamaicans and Panamanians mixing their cultures and singing reggae in Spanish. From there reggae en español was born [in the Eighties], and El General and Nando Boom came from that scene.” Although the two Afro-Panamanian vocalists are often credited as reggaeton’s founding fathers, DJ Nelson believes the difference is that they performed with a live band – as opposed to the Noise collective, who reconfigured it electronically for the clubs.

“[Also around the Seventies, Eighties, US-based] Puerto Ricans and African Americans were in the Bronx inventing hip-hop,” he continues. “But the origins of the dembow rhythm [the signature beat of reggaeton] are Jamaican, and the one who made it famous was Shabba Ranks with his [1990] song ‘Dem Bow’. His dembow used a live percussion that went tarika-tun/taka-ta-ta… But the dembow that [Puerto Rican producers] were influenced by was the rhythm that [Jamaican producer, Bob Marley collaborator] Dennis “The Menace” Thompson created: an electronic dembow which goes boom/taka-ta/boom taka-taka. That’s the one that stayed. So when this entire mix came to Puerto Rico, we fused it as a dancehall, underground rap-reggae.” 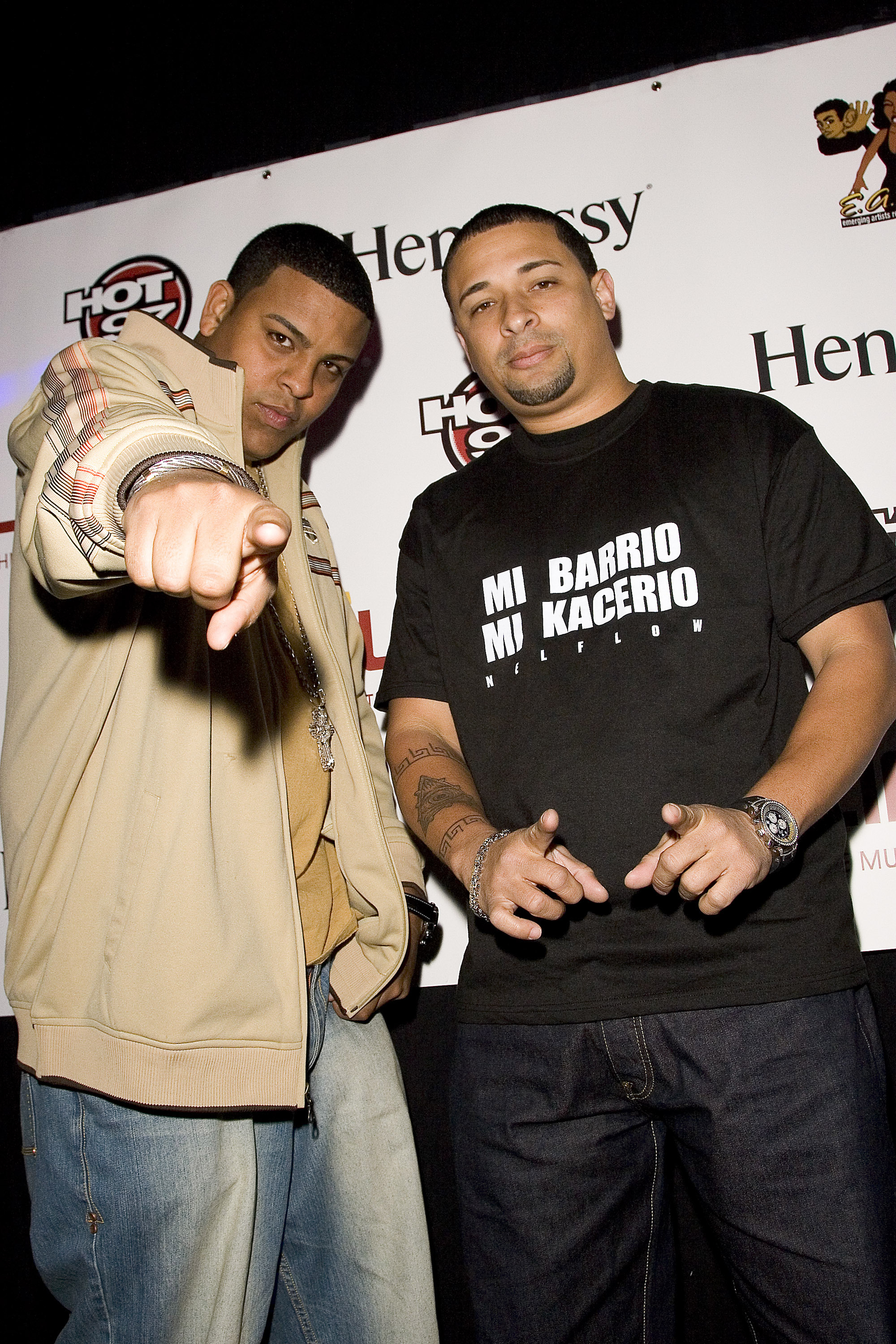 Meanwhile, DJ Negro was trying to make the founding father of rap en español, Vico C, a star. The stuff of legends began when DJ Negro got fired from a weekly DJ residency at a now-defunct, then-well-known club in Puerto Rico – and started his own in 1992. “What I opened was basically a box painted black,” he recalls. “I opened up [my club] the Noise to show the dude [who fired me] that his spot only got lit because of me – not because his club was fancy. I began to gather fresh talent in my venue with the new rhythm I had produced.”

A month after the old club closed, the Noise had begun to rise. DJ Negro pulled San Juan’s illest rappers, producers, and DJs to form a ferocious, legendary collective à la N.W.A, which would later birth stars like Ivy Queen, DJ Nelson, Tony Touch, Las Guanabanas, among others. “Rappers and singers started approaching me with their rhymes,” he boasts. “So I’d give them the mic while throwing them a beat. People became famous at the club, and we recorded them. Then people started buying our cassettes. That’s how the underground was made.” The first mixtape was titled The Noise, Vol. 1. And by Volume 2, DJ Negro’s childhood friend, DJ Nelson joined the crew.

The release of Volume 5 in 1998 marked Ivy Queen’s inauguration as the First Lady of reggaeton. “I used to live in New York’s Lower East Side,” says Ivy Queen over the phone from her home in Puerto Rico. “So when I moved back to Puerto Rico, I was coming with all that hip-hop influence. One day I was brought to Carolina to DJ Negro’s house, and next door was his marquesina [garage]. I remember walking in to audition, and all the men from the Noise were there recording [Volume 5]. DJ Negro was already well known because he is the DJ, the root of urban music. Even though he made hip-hop en español [with Vico C], he is the first.”

“When they say ‘you’re going to record’ and DJ Negro is there,” she adds, “you got to get your shit together. I had never sang in front of anyone huge like that before. I was so shy that I performed with my back towards them, but when I turned around [DJ Negro] was amazed. I remember everyone said I sounded like a man. I thought it was a curse, but it wasn’t – it was a blessing. It was different. I looked different. I was a complete tomboy,” she points out. “It was every [aspiring rapper’s] dream to join the Noise or Playero. Those were the top DJs, and I am the the first woman of that crew to be accepted.”

With Ivy Queen’s arrival, one of the most genre-defying troupes of the Island would gain notoriety at a massive scale for its brazen lyrics in balanced opposition. On the yang side, the men’s unflinching flows were vulgar and hedonistic, immersed in drugs, sex, and crime. Ivy Queen represented the yin through her messages of female empowerment. In 2003’s “Quiero Bailar” she asserts: “Yo te digo si tu me puedes provocar/Eso no quiere decir que pa’ la cama voy” (“I’m telling you if you can seduce me / But that doesn’t mean I’m off to bed with you”). Flirty yet dignified, reggaeton’s original rude girl raps about the joys of perreo over a menacing, commanding thump.

“My flow has always been defined by women’s rights,” she reflects. “The first thing to come out of my mouth was to give respect to the ladies. I want women to identify when they hear me. When I entered urban music to sing reggaeton, lots of the lyrics denigrated women.”

“When we started [in the early to mid-Nineties], we spoke a lot of malo,” DJ Negro says on the converse lyrical content of reggaeton. “Our songs were nothing clean, they were super dirty. It was a way to call out attention.” Historically, Afro-diasporic communities that have been repressed by governmental rule have been known to birth new cultural movements as a form of resistance (e.g. Afro-Beat, blues, jazz, bachata) – but this crass lyrical style was armed with a different approach of pure indulgence backed by tropical-soaked hard-hitting grooves. By that point, or in 1995, the term “reggaeton”had started to spread.

“Now there are two stories to the term’s origins,” DJ Nelson states from a New York midtown studio. “I later learned that Daddy Yankee had mentioned ‘reggaeton’ before in one of Playero’s recordings [Playero 36]. The difference is that when my album is released through one of Puerto Rico’s most famous record stores of the time, Casa de los Tapes, the publicist who worked on the press used the tag ‘Esto es Reggaeton’ [‘This is Reggaeton’]. The industry and artists weren’t utilizing the term yet, but the media loved it so much that the name exploded in 1995, and it stayed.” 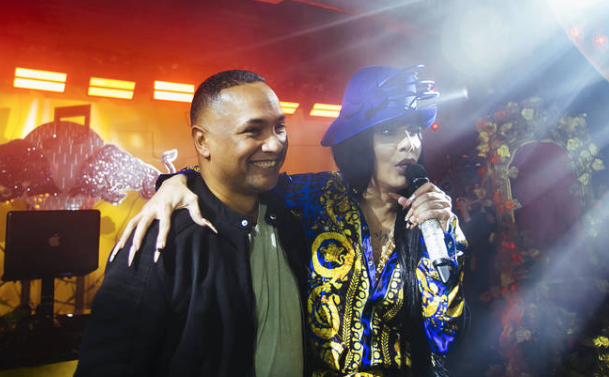 Now that there was a word to define this rebellious, ever-expanding genre, havoc wreaked throughout the Island as authorities cracked down on the perreo parties. “During those times, merengue and salsa dominated [the mainstream], and suddenly there were tons of kids singing all these barbarities [in reggaeton], so the government got worried and took action,” explains DJ Nelson. “Whoever didn’t know about reggaeton now, knew [due to the media coverage frenzy]. If [authorities] heard you bumping reggaeton from your car, they’d break your tape and fine you $500.”

“They confiscated tapes, shut down parties, and called us cacos [thugs],” says Ivy Queen. “They said that we wouldn’t last, that we were hooligans. But the biggest blessing to the genre was when it was told ‘No!’ It becomes legendary when you say ‘no’ […] That became the greatest blessing in the world [for reggaeton].”

As the genre gained international popularity, it became harder to contain, and authorities had little choice but to reform. “We reached an agreement and the press noted that we would begin adding ‘Parental Advisory’ for explicit content and ‘Clean Lyrics’ to the clean versions,” says DJ Nelson. “Now, there’s a huge movement involving women!” exclaims Ivy Queen. “It’s about time. We needed it […] Trap today is doing what reggaeton did when it started. It’s the same lyrical theme – women this, culo that, tetas this – it’s the same thing when we started but with different beats.”

“Today’s trap generation became successful for rapping malo,” DJ Negro points out. “They had to do the same thing that we did, and that was to sing malo. They gained attention that way and that’s how they’ve ascended. Nowadays, however, they’re starting to change the lyrics by singing [cleaner]. If you notice, Bad Bunny is arranging softer lyrics now that everyone knows who he is. We paved the way for this to be possible.”

The rebel “noise” that began in Puerto Rico’s underground didn’t just make an impact on the island – but 20 years later, it continues to make waves in global Latin music today. “Back when it started, one never thought [reggaeton] would reach this [magnitude]. I would be lying if I said I did,” reflects DJ Negro backstage at Hasta Abajo, as the Colombian neo-reggaeton upstart, Rosa Pistola, spins her own eclectic takes on the genre. In an age where reggaeton is synonymous with mainstream Latin pop, and where a reggaeton track is currently the most streamed song of all time, the once-prohibited dance music has become a symbol of sorts: a celebration of Latinx pride worldwide. “[Reggaeton] started off as a vacilón [a party hangout],” says DJ Negro. “And the vacilón hasn’t ended.”

The interviews above were translated from Spanish.