The way he tells it, Yungblud had no choice but to be a rock star. In one of the first photos ever taken of him, a few hours after being born, he’s outside the hospital holding a ukulele with a painted image of the Beatles on the instrument’s face. Later, growing up in Doncaster, England — an industrial town that he describes as “the Detroit of the U.K.” — he never quite fit in with his peers. “I didn’t think I was going to be a lawyer,” he says matter-of-factly. “Where I grew up, putting on make-up or wearing a skirt or even playing rock music was not really seen as honest.”

Today his eyes are outlined in smeared, dark-black eyeliner that looks like it’s been on for days, and his make-up artist has just applied a fresh coat of purple to his lips. In just a few hours, he’ll have every word of his songs sung back to him by the sold-out, similarly dressed audience at New York City’s Webster Hall.

The 22-year-old singer, born Dominic Harrison, has risen quickly to become a leader of Gen Z-style pop-punk with his politically inclined lyrics, rap-derived production, and rebellious ethos. Known for his gender-bending style, signature pink socks, and wide, wolf-like grin, Yungblud has built his fanbase the old-fashioned way, through live shows and fan buzz. First came a self-titled EP last year, followed by a debut album, 21st Century Liability, and a string of 2019 singles like “11 Minutes” with Halsey and Travis Barker and “Original Me” with Imagine Dragons’ Dan Reynolds, which have helped him headline venues across the U.S. and Europe.

Harrison came by his interest in music naturally: His dad owned a guitar shop, and his grandfather was a musician who joined Seventies glam-rock pioneers T. Rex onstage at least once. Around the house, he listened to the Jam, Oasis, the Clash, the Beatles, and Blondie, eventually finding his way to My Chemical Romance and the Arctic Monkeys. His maternal grandmother, who’d been a single mom, loved Rod Stewart so much that she told an impressionable young Harrison that the “Maggie May” singer was his grandpa.

“This five-year-old me — this gobby little ADHD-ridden nutcase running around ASDA, the U.K. equivalent of Walmart — and I pick up this picture of Rod Stewart,” he recalls. “Me nan’s paying at the till, and I go ‘Nan, this is your husband!’ She was so embarrassed.”

Around age 11, he was pretending to be Freddie Mercury in his bedroom when his mom noticed his singing talent. Soon, he wrote his first song, about a girl from his high school named Lizzie. 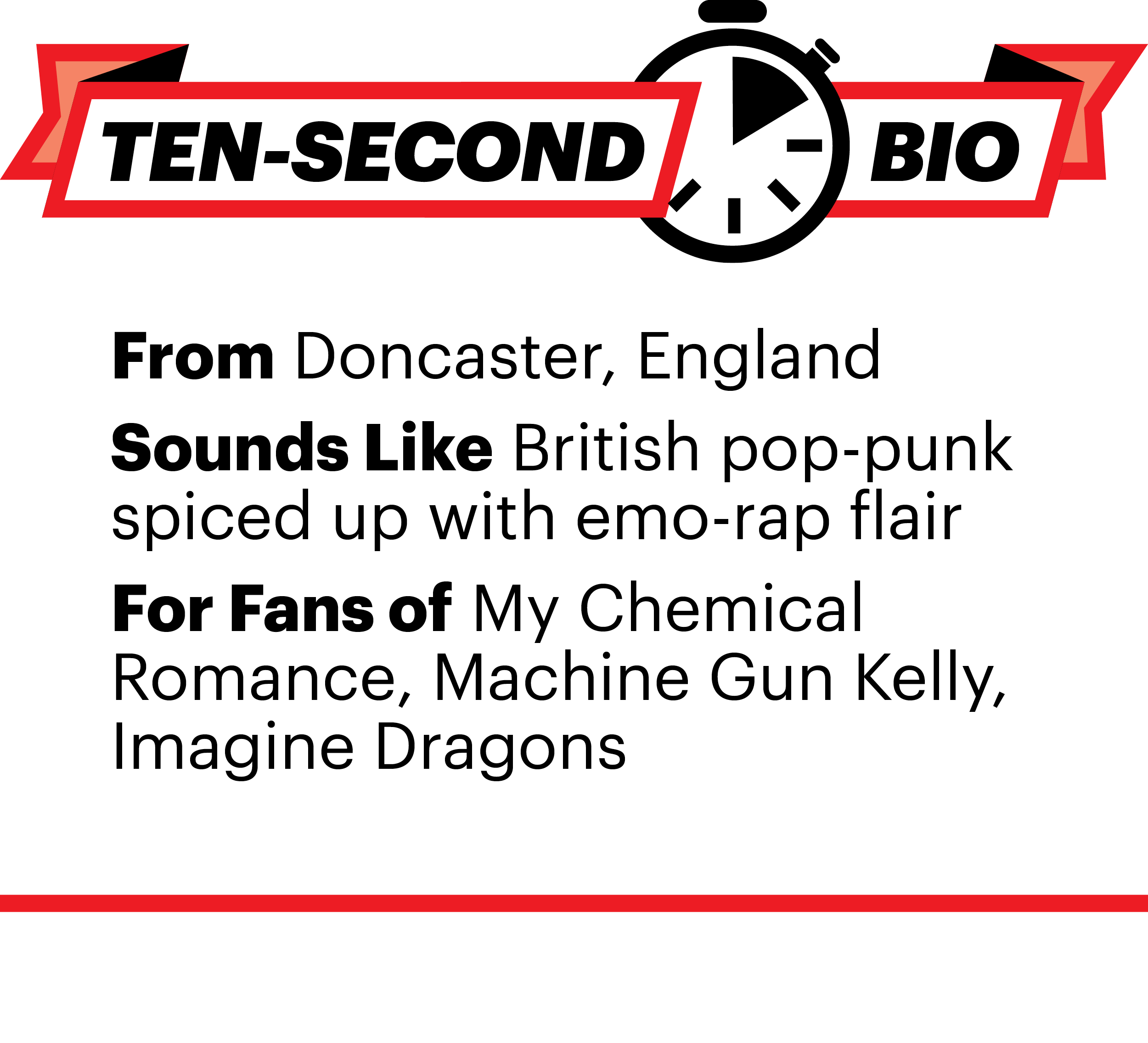 Even if she wasn’t super-enthused about her son’s earliest songs, Harrison’s mom encouraged him to continue exploring a fashion sense that bent the masculine norms of the people around him. For school discos, she would help him straighten his hair and let him wear lipstick, nail polish, and skinny jeans, similar to the look he’s sporting right now. Tonight he’ll be able to look out from the stage and see a packed crowd of teenagers dressed up like him, but at the time Harrison felt unwelcome among his classmates, preferring to hang out with teachers instead.

When he began studying theatre at London’s Arts Educational School, he still had trouble fitting in, but he found solace in playing music, imitating the bands and rappers he grew up on like My Chemical Romance and N.W.A. A manager reached out to him, but felt that Harrison’s leftist political lyrics would make it difficult for him to get played on radio. Wanting to make money, the teenager decided to listen.

“Six months later, I’m floating in my eyelashes with an acoustic guitar, singing vapid pop music that means nothing,” he says with disgust. “The final straw was when someone asked me to go on The Voice.”

In 2017, he embarked on what he calls “The Month”: a transformative period in West London, where he lived in a flat that had very little light. There, he formulated a new stage presence as Yungblud.

“I designed my stage outfits, the pink socks, what my community was going to be about, the fact that I’m never going to conform again to be something that someone else wants me to be,” he says.

Soon, he found a new manager and his new approach started to connect. Harrison played a show in London in 2017, shortly after releasing his first single as Yungblud, and was in awe of the fact that 20 people showed up and sang the words back to him. He started touring around Europe, seeing the audiences grow bigger and more passionate. He went on to record 21st Century Liability in a Soho basement. On each song, he explores the internet-and-Ritalin-tinted neuroses of his generation, addressing gun violence (“Machine Gun [Fuck the NRA]”), his own twisted and anxious thoughts (“Kill Somebody”), and a ripped-from-the-headlines story about a graffiti artist’s romantic gesture for his girlfriend that became exploited by corporate brands (“I Love You Will You Marry Me”). The album is frenetic and poppy, a perfect piece of candy for the disenfranchised kids Yungblud relates to.

“It was just a call-out,” he says of the album. “It was just ‘Hello, I’m here! Is anybody out there feeling a little bit like me?'”

It turned out that a lot of kids across the world did feel like him: alienated, alone, confused. He ended up building the kind community he’d always dreamed of but couldn’t find with his peers. At Webster Hall, his young fans scream like he’s a pop-punk Beatle while crowd-surfing, moshing, and screaming “Fuck the NRA.” When he comes out in a skirt for the encore and announces that his new EP The Underrated Youth is available a few days early, the venue shakes with their excitement.

Even as his star continues to rise, Yungblud is not worried about losing his reason for writing songs and screaming them into a microphone every night. He has no fear, he says, that his messages will be co-opted in the same way as the graffiti artist at the center of “I Love You Will You Marry Me.”

“If [this] becomes anything more than me and my two best friends, going across the world, talking to the best fucking people in the world about a message that we genuinely believe in,” he says, “then it’s fucked, it’s flawed and I want nothing to do with it.”