On Tuesday night, 15-year-old Brynn Cartelli became the youngest contestant to ever win The Voice. Throughout the show, she tackled dramatic ballads – Lady Gaga’s’ “You and I,” Adele’s “Skyfall” – and impressed viewers with her vocal poise. As longtime Voice coach and Maroon Five singer Adam Levine put it admiringly during the audition round: “You sound like a 36-year-old who’s been through it.”

The morning after her victory, Cartelli spoke briefly with Rolling Stone about choosing songs that allowed her to defy genre constraints, working with first-time Voice coach Kelly Clarkson and aiming for pop radio with her new single “Walk My Way.”

Why did you choose to audition with Labrinth and Emeli Sandé’s “Beneath Your Beautiful”?
I thought it was a really pretty song, and I had been singing it a lot in my gigs before I came to the blind audition. … I thought I could do something with it. It just felt right, so I decided to go with it.

After you sang that, Kelly told you she could win the show with you – did you believe her at the time?
Honestly I blacked out, so I don’t really remember her saying that. When I watched it back, I definitely did not believe it.

You had several interesting song selections – one week you would lean toward the Top 40, then you would cover Jackie DeShannon or a song written by Patty Griffin.
Each week I had a different idea – I had a million ideas. I wanted to find a really good collection of songs from different genres that I could make my own. It depended what I wanted to bring to the table that week, what I wanted to show, what I wanted to say. I hate when I get pinned down to a genre. I have a sound, a lane I want to go down, but I never want to be stuck in my song choices. Kelly was so supportive of my crazy song ideas.

What is that lane you see yourself going down?
I see myself doing a darker soul-pop lane in current music. And I’m a songwriter. I love telling stories, and I’m a born storyteller. That’s what I do, and that’s what I want to continue to do.

Did you feel that any performance was especially pivotal or rewarding as you worked your way through the competition?
I never had the feeling that, “Oh, this song is going to make me win.” There were a lot of really special moments for me. When I first sang “Fix You” by Coldplay that was one. I love that song so much, and I love Coldplay, and I love what the song meant. Having the ability to sing that on national television with a beautiful set, I was so honored to do it.

What kind of advice did Kelly offer you as a first-time coach?
Just to have fun with it. Take my moments to remember and live in the normalcy of life. It’s really crazy; it’s been crazy already, and I know it will get crazier. But it’s going to simmer down at some point. But I need to enjoy it and soak it up while it lasts because you never know what’s going to happen. I want it to be a long career; I really do. I’m going to work really hard at that, and I know Kelly will help me. But she’s really good at reminding me to remember the normal things in life and to live in those. I already am missing it! I’m missing a lot of things.

Do you think her previous experience on a singing show made her an especially good coach?
Oh my God, yes. She had all these ideas: This is what you’re going to feel like in this moment, but this is what you can do. It really helped me. She knows exactly what it feels like. The other coaches may think [they know], because they’ve been there longer, but she literally knows what it’s like to be standing on that stage and be judged by millions of people when you’re just trying to sing and enjoy yourself. 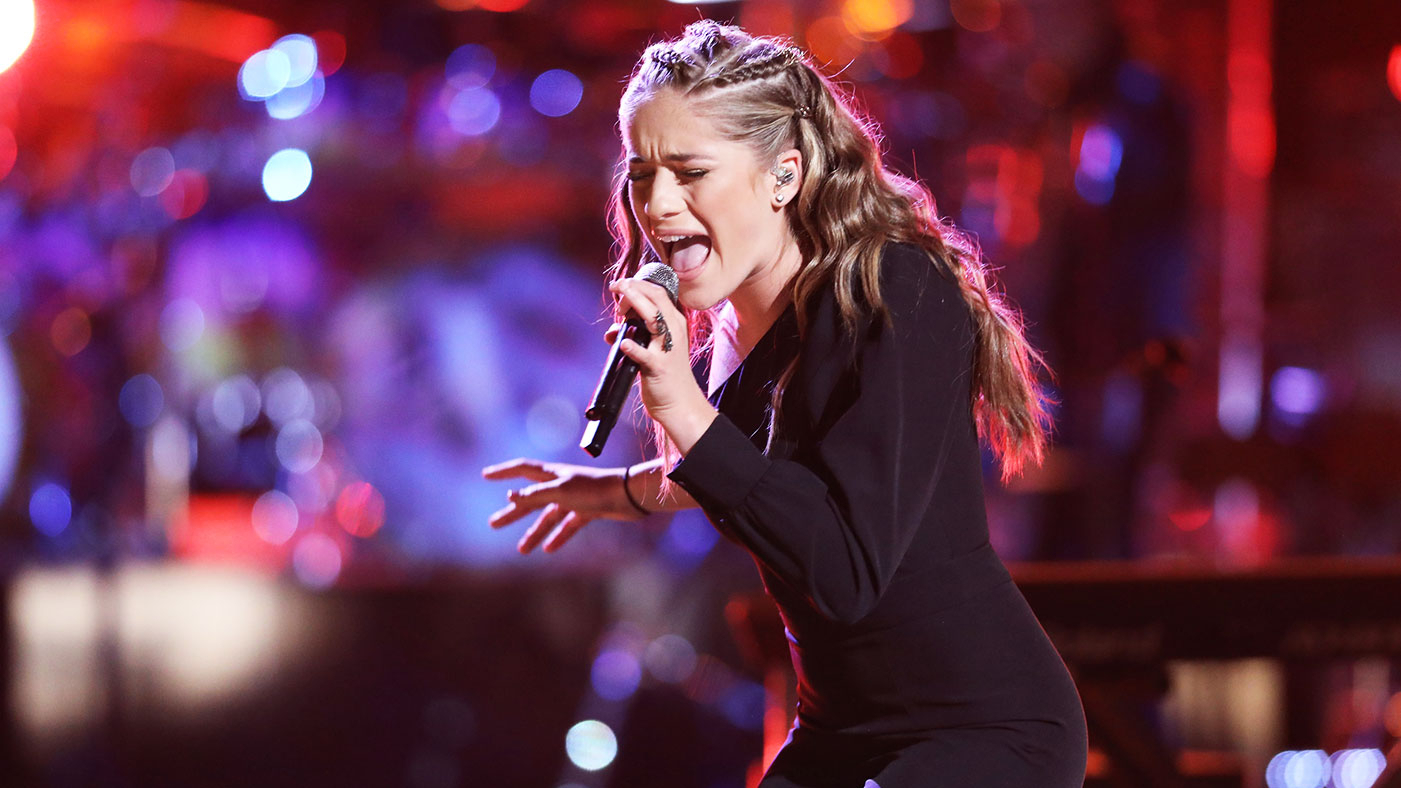 What did you like about having “Walk My Way” as your original single?
It’s definitely a different sound than a lot of stuff I went for. A huge part of what Kelly did, which was super, super smart, was we wanted to bridge the gap from Brynn Cartelli on The Voice to Brynn Cartelli as an artist. We wanted to have a song that would make it on the radio and do well. It sounds good; I sound good on it. That was really important. I came up with all the ideas for changing the demos, and I’m really proud of that. It was definitely a really good song for me – it’s catchy and people can remember it. It’s amazing writers: Julia Michaels, Justin Tranter and Nick Monson. We had it produced by Jesse Shatkin; he has done amazing things. It was a really, really cool start.

You got to work with Julia on that and then sing with her in the finale as well.
Yes! It couldn’t have been more perfect. We had a lot to talk about, because I’m a songwriter too – I just have a very different style than her. She is phenomenal; she’s no joke. She knows how to write a song. She’s actually an amazing human – so kind, so down to earth, so funny.

What does it mean to you to be the youngest-ever winner of this show?
It still hasn’t hit me yet. I don’t understand how it happened or how I deserved it. But somehow I’m here. I’m so thankful. I never ever imagined this until my name was called. People say I showed a lot of confidence onstage, but that was just because I was thinking in that week, that moment. I had ideas like, if it were to happen, but it was never, “Here we go, I’m gonna win this thing.” It never crossed my mind.

Do you think your win will serve as an example for other young singers?
I grew up watching this show and American Idol and all the other competition shows. A lot of the contestants have inspired me. There have been contestants on The Voice from past seasons that didn’t even win and I have been so inspired by them. To think that I am now one of those winners? I really, really hope there is a little girl out there that is believing in herself and knows that she can be here. That’s a really cool thought.

So do you have to go back to school now?
I go to a small public school in Longmeadow, Massachusetts. I do have to go back. It’s going to be weird and crazy. I feel like that whole part of my life is a question mark right now. But I want to go to school. I’m strong in school, and I love it. I hope I can find some normalcy, get back to normal things, and continue this at the same time. I don’t know how it’s going to work, how that’s going to hold, but I want to try my best.