The music video for Young Thug’s song “Wyclef Jean” was released late last night, and has become an instant sensation, getting more than a million views in 24 hours. The clip was co-directed by Ryan Staake, founder of the Brooklyn-based production company Pomp&Clout, and Young Thug himself – though as the video clearly states, the star never quite made it to the set. Instead Staake details through a series of blunt title cards how everything they had planned to film managed to crash and burn. It’s a hilarious and honest approach that combines the industry humor of “What They Do” by the Roots, high concept alternative rock stunt videos like “Taxloss” by Mansun and the insider trivia of VH1’s Pop-Up Video.

Staake gave Rolling Stone further insight on making “Wyclef Jean,” and how he managed to spin what could have been a complete disaster into something totally unique.

How in the world is this video out and available to be seen?
I honestly had no idea that this thing was coming out until it came out. I had a sense that, “OK, I’ve delivered it, they’ve paid the final invoice, things seem good,” but based on the way things had gone, I wasn’t really ready to get my hopes up. Then last night I was working late in the office on some other stuff and saw that it had come out. The reaction since then has been really positive and it’s been exciting to see. There have been directors who are responding with similar horror stories and the general audience seems to be into it as well, which is exciting. I was hoping it wouldn’t just be a filmmaker in-joke.

Review: Young Thug's 'Jeffery' May Be Rapper's Strongest in Years

I guess the reason why the label accepted it was, honestly, because they were so far down this path at this point, to bail on it would have been even more wasteful than even the initial debacle. I think they also realized that it was a good idea, and probably a better idea than what we would have initially done. As bitter as my voice is in the writing [in the video] and as annoyed as I was on set, I do think in the end, [Young Thug’s] creative broad stroke of simply not showing up made this video. Which is bizarre, but that’s kind of the way it rolled.

After you initially turned in your video, was there back-and-forth with the label, or is the video exactly what you turned in?
There was very little back-and-forth. I did a brief treatment explaining it and then just put it out there. I was thinking, “Are they going to respond to this? Are they just going to write me off?” It was kind of a mixed reaction from the label, but the people who were into it were very, very into it, very affirmative of the fact that it was something interesting and new, and that this was something that I should continue pursuing. I actually had a call with Lyor Cohen from 300 before I wrote a word of it, just talking about our respective fears. I was worried that the label was going to butcher it and I wanted it to be my voice, and he and his team were worried that I would say some really offensive stuff. I think I really straddled that line of being just offensive enough.

In the video you make a reference to your original treatment of having Young Thug lighting the budget on fire. When did it come together that you guys would co-direct the video?
I was going to withdraw the budget in as many singles as I could and stack a bit of a paper and wood core in the middle of all these singles and film it from a distance so it looked like even more money, but there were potential legal ramifications to that – that was the initial idea that was going to be me as the director. I delivered that idea to them. Then, out of the blue, they said, “Hey, we really like this, but Thug has this other idea,” and they sent this audio. I thought the audio was just them in a conference room talking with a creative director and some art directors and people from the label. It turns out actually they were recording that audio with another director who was slated to do it, this guy John Colombo. I’ve since found that out on Twitter. He reached out to me and was very cool about it, but was like, “Yeah, I’m the guy that says ‘juxtaposition’ at the beginning.” I was like, “Holy shit! I had no idea.” That adds another level of weirdness to this that I wish I would have known so I could have alluded to that, that I’m the co-director, but I wasn’t the first director.

So anyway, they sent [the audio] and said that it would be a co-direction, and I thought that made total sense, because it was Thug’s creative seed that he put out there with this audio file. I liked the audio file so much that I planned to use that in the video. That was the plan from the start, to have the construction shot at the beginning where as he’s describing stuff, we see it form in front of the camera. But the true plan was that he was supposed to be there in the middle, he was supposed to pop in when he says, “And I want to be in one of them.”

“I was trying to deliver to make an interesting statement, but also fulfill a contractual obligation.”

What were your expectations when you were told you were going to co-direct with Young Thug?
I knew that he wasn’t going to be blocking camera moves on set. Directing in music videos to me is 75 percent ideas. That’s a huge gesture that the director gives to the project in most cases, or at least in how I like to work. I felt that him simply having this idea was very much him pulling his weight as a co-director. I was picking the ball up and running with it. In that sense I feel that he fulfilled his role. I just thought the quotes of “co-directed” was a nice little subtle gesture of the angry director as well.

When did you realize the video that you thought you were going to make was not going to happen?
Midway through the day I realized it was pretty much gone. I guess that’s around the time that the BBQ stuff was starting. That’s when alarms were going off in my head that this had gone from a mishap to a disaster. But then you’ve got all this shit on set and you’ve got to do something.

So what’s the car ride home like after you’ve wrapped? What’s going on in your head?
I rode back home with my creative director from Pomp&Clout, Aaron Vinton, the two of us in an Uber. It was kind of silent, like, “What the fuck just happened?” Then occasionally mentioning something like, “Wasn’t it crazy when … ?” or “Can you believe … ?” He’d be like, “Yeah, that was messed up.” Then we’d be quiet a bit longer and then something else would come up. It was just very surreal. To come out thinking, “Well, obviously stuff’s going to go wrong, but generally going to work out,” but all of a sudden you just have nothing. I was a shell of a director afterwards. I was not optimistic about the future of the video. 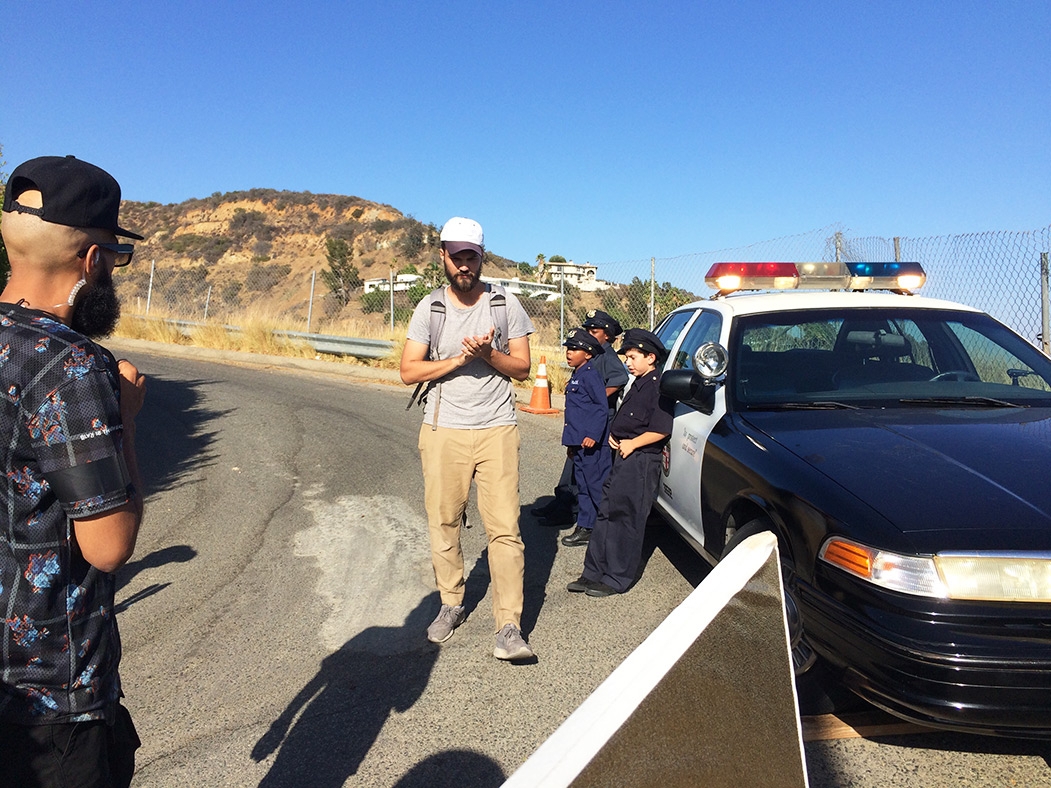 How long was the turnaround before you flipped it into the idea of making a video about making a video where the star doesn’t show up?
It kind of came out of the fact that the label was interested in doing reshoots. We had our production designer hold onto the cop car and the Power Wheels in storage so that we could do a reshoot sequence with [Young Thug] at a later date, but we weren’t aligning on the realistic budget for something like that. And there wasn’t confidence that he would actually show up again if we did that. Then I was just looking at the footage and we edited a very basic assembly cut of what we had in the meantime to kind of see what was there. I was looking at it and thinking, “This day was just fucking insane and there’s so many good stories there.” I’ve always been into behind the scenes videos and Heart of Darkness, the doc on Apocalypse Now – anything like that that shows the trials and tribulations of production.

So I put together this treatment, a third treatment now, which basically was pretty curt and to the point, just like, “Look, we don’t have anything, I’m not going be able to make a video out of this. You guys don’t want to pay what’s a realistic budget for reshoots. We should do this idea where we talk about the video itself in the video. We talk about what a disaster production was. We own the situation and turn it into a spectacle rather than a calamity.” I basically just laid it all out. It wasn’t a planned stunt, but I think that’s the end result of it. A “marketing gem” we’ll call it.

Do you have a sense if Young Thug has seen the video yet?
I believe he has, especially since it’s on his YouTube. I know that there were a couple rounds of revisions on some of the writing and legal stuff throughout. They would say, “We’re sending it to his management,” or whatever, but I have not seen any direct response from him yet. I know that Wyclef tweeted the video out today, so that was exciting.

I wonder if [Young Thug] is pissed off at me or if he’s like, “This guy really pulled something out of his ass and it worked out pretty damn well” and is psyched about it. I think it’s just as much making a mockery out of the production world and the industry of music and celebrity.

If you hadn’t salvaged this video and nothing ever came out from it, is the blame put on you or on him?
It’s always on the director. We’ve had a couple videos over the years that have gone that way. It’s always the production company and director that tends to get blamed. If an artist is late and it fucks up your whole day, tough shit. It’s that attitude which is insult to injury at that point. I’ve been left with a remaining invoice at the end of projects because the client just walks away. I won’t name the names of labels, but because they’re a larger label, I don’t have the legal means to go up against their team and I have to bite the bullet. So, in a sense I was trying to avoid any shit like that on this. I was trying to deliver to make an interesting statement, but also fulfill a contractual obligation.