When Young the Giant started working on their third LP in 2014, the 2016 presidential election was still a glint in pundits’ eyes. But it turned out that the vibrant pop quintet’s Home of the Strange, out August 12th, would hinge on one of the topics that’s become a point of contention in the race for the White House: Immigration.

“We wanted to say more about who we are – we’re all first-generation Americans or immigrants ourselves,” frontman Sameer Gadhia told Rolling Stone during a recent phone conversation. While Home of the Strange doesn’t focus on the finer points of policy or directly refute rhetorical points that have been ping-ponging around the media, it does use the band’s roof-raising anthems to tackle ideas that are inherent in the immigrant and first-generation American experience. The simmering “Amerika,” loosely based off an unfinished Franz Kafka novel, paints a portrait of endless seeking, while the boisterous “Mr. Know It All” is a love song to someone defined by her uninhibited pursuit of freedom.

Throughout Home of the Strange, Young the Giant’s big-tent pop mirrors an openhearted optimism about the American dream. “There’s that awe and hope and real patriotism for the country that we call ourselves a part of,” says Gadhia. He spoke to RS about the band’s diverse makeup, why he loves Kafka and what it’s like to experience a contentious election year from the perspective of a touring band.

When did you start working on the album?
In the fall of 2014, when we were on the road with Kings of Leon. In a lot of ways, we felt relieved and relaxed that we’d finished with the trials and tribulations of a second album, and we were in a very comfortable headspace, and everything was very fluid. We started some of the writing there, and once we got home, we got going.

Was there a specific incident that inspired the title?
It’s taken from the play on “home of the brave” – it’s the immigrants’ America. People here who are first-generation Americans, some of whom are just starting their lives here, are trying to assimilate into the American dream and the belief systems over here. It was a very natural thing for us. We wanted to say more about who we are – we’re all first-generation Americans or immigrants ourselves. We consider ourselves to be Americans, but we’re also tied to a lot of the belief structures of our forefathers.

I think it’s a unique place, because you have to struggle to find a place where you can belong, and where you don’t whitewash or bleach out your heritage and your culture. This is a very strong American narrative, which hasn’t been discussed too much – the Asian American story, someone who’s coming here that’s not part of the previously held binary of what’s American society. It’s been less than 100 years since people from India moved to America, so it’s still pretty fresh. 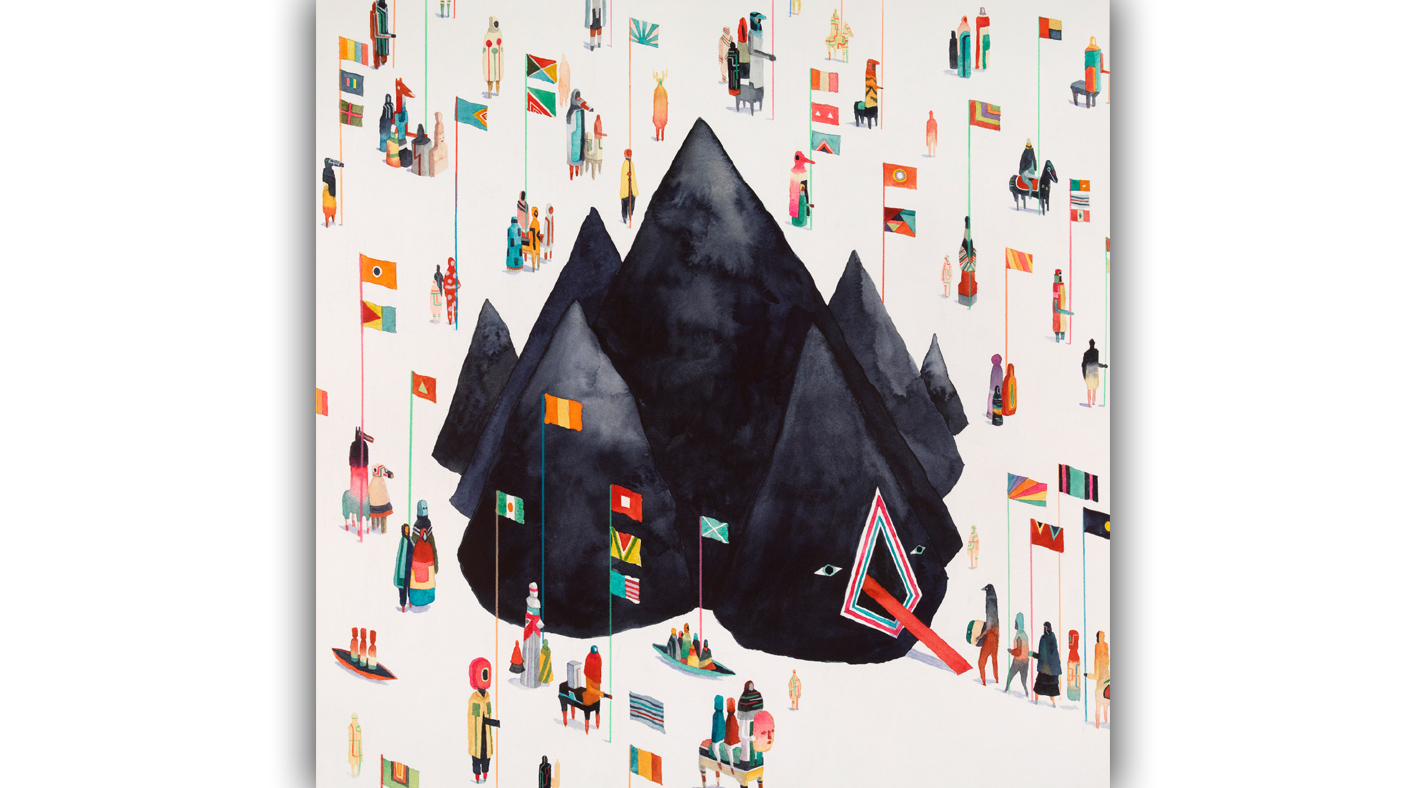 Where did you grow up?
I was born in Ann Arbor. My dad worked for Ford in the Eighties, and my parents lived there. Everyone’s kind of from everywhere – Francois [Comtois, drummer] is originally from Montreal, Jake [Tilley, guitar] is from England, Payam [Doostzadeh, bass] is Persian but he was born in California. Eric [Cannata, guitar] is Italian and Jewish, and was born in New Jersey.

Did the album’s lyrical themes start coming out when you were writing in 2014? Even though the record does chronicle the American story – coming here and finding a new life – that story has become a lot more politicized in the last year.
It definitely has. It’s funny, because we had no idea. We finished this album a while ago, and we’re already working on what we’re going to do next. It was a story that you could kind of see the undercurrents of things when you travel. When you’d go to colleges, you see the racial tension that’s happening, and it’s kind of this narrative that’s always there. At the same time, we do have some dark lyrics, but there’s something amazingly beautiful and bizarre and grotesque and great about America that’s unlike any other place. I think for every song that might have that piece of darkness, there is that light side – there’s that awe and hope and real patriotism for the country that we call ourselves a part of.

“There’s something amazingly beautiful and bizarre and grotesque and great about America that’s unlike any other place.”

That’s what makes great pop music, too. It balances the everyday realities and sometimes horrors with these moments where you can let the light in.
For better or for worse, we’ve always been a very honest band, and there’s a lot of earnestness in what we do. I think that childlike wonder is an important perspective for how to deal with certain things – especially with media, which manufactures this fear that America is stagnating into this horrible cesspool. There’s a lot more to be gleaned from that.

When did you first come across the Kafka work that inspired “Amerika”?
I was a fiction-writing minor at Stanford. I actually didn’t really like Kafka very much – I think maybe it was the translation into English, which was so methodical. It took me a second, and then I sat with it, and I loved the way he explains magic. He really founded the idea of magical realism, this really rational human analysis of bizarre things that have happened.

I stumbled on Amerika while we were on the road. I’d read The Castle; I’d read The Trial. After reading it, I sent it to the guys. It really resonated with me. First of all, because the book is unfinished – he never wanted it published. There’s no ending, so it’s this infinite feedback loop of this journey that the main character has when he comes to America on a boat. Essentially all he wants to do is find a place to belong, but every time he gets closer, he finds himself a step behind again. I think for the immigrant in America, it makes a lot of sense. You can become complacent sometimes, completely unaware, and that’s not a bad thing – that’s kind of the goal, just to feel like you belong. But every now and then, you realize how far away you are and how different you are from other people. That’s something that you should be proud of, and always represent, as opposed to trying to forget, instead of pushing away.

Your mention of “pushing away” reminds me of the anxieties expressed in “Mr. Know It All.”
That one’s kind of a love song, in the rough sense. We have this character named Titus, who’s the character in “Titus Was Born.” He was born between borders, in the sea, and he’s just kind of going around and figuring out where he belongs. And he’s fallen in love with someone who embodies the idea of freedom, this woman who is completely uninhibited. That song is about his inability to relate his feelings, and that continuous search to find that person.

I really liked “Nothing’s Over,” which evolves from this moody stark song into something much lighter.
The whole idea is that we want it to be a dance party. We want it to go on forever live. 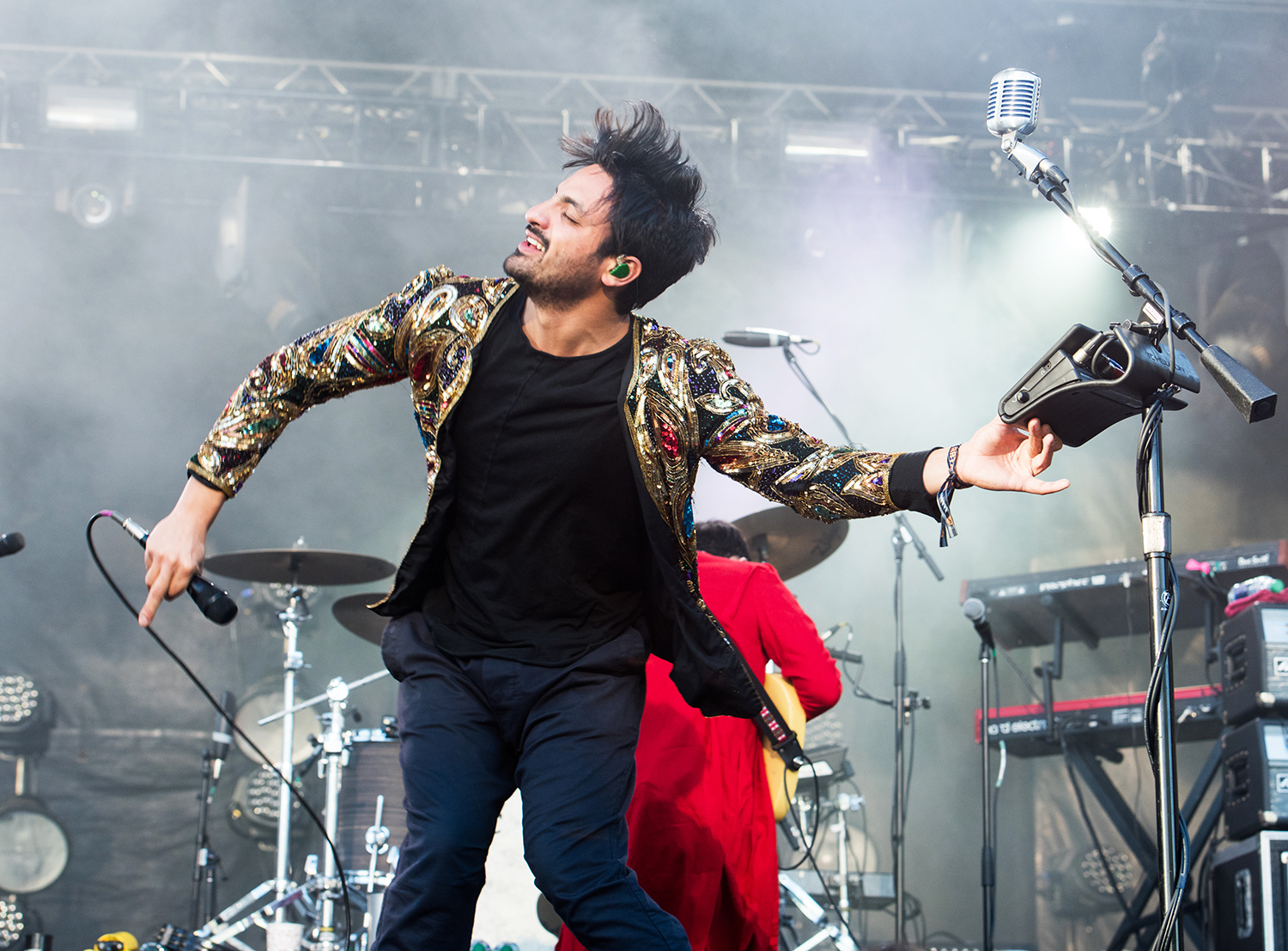 How have your fans reacted to the songs you’ve released so far?
It’s been a great reaction online. Now we have a window into the opinions of our fans, and we really didn’t have that before – even at the beginning of our careers, it wasn’t as ubiquitous. People were online, and Twitter was starting up and stuff, but it wasn’t really that big of a thing. From what I’ve seen online and when we play shows, it’s been a great reaction. I think people resonate with stuff that’s honest, and we’ve always tried to establish honesty with our fan base. With the second album, we told them we weren’t going to be complacent and write the same album again – we wanted to try and challenge ourselves, and move further out in our space. This album is a great manifestation of that, and it’s great to have people understand that. I think they vibe with us that it’s honest and real, and that we’re having a good time making it.

You’ll be touring this fall while the presidential debates and everything are in full swing. I feel like that’ll be an interesting way to take the temperature of the country.
Most definitely. I’m very excited, especially since we’re playing college shows. During the college tour we did last November, we’d already had this narrative as a very strong part of our record, and it almost unfolded on the road. We saw the riots; we saw Black Lives Matter versus these KKK people coming to schools and handing out pamphlets. There was this general fear and weird sidestepping of openness. It’s scary to see that, but at the same time it’s real. I live in Los Angeles, a very liberal place, and I grew up in a liberal place. It’s healthy to see and realize that people are feeling this visceral thing, that they’re afraid. Everyone manifests fear in different ways, but I hope things will progress slowly, and we’ll be able to see that on the road.

Do you see Young the Giant as a political band, or as a “personal is political” band?
I see us as a personally political band. Sometimes you get passed a torch. We have strong beliefs, and now more so than ever, we’re talking about human rights. Our main thing is about equality. It’s a humanitarian issue; it’s not a political issue. So we’re comfortable going forward on this path; we have the platform and an open line of dialogue with our fans, some of whom are completely unaware of the racial struggles in America, or the racial struggles that we deal with on a personal level. I think that’s a very powerful, important thing. The thing about music is that it really can bring people together, and that’s what we hope we can do.