Yola was at home in Bristol in December of 2015 when she realized her kitchen was beginning to fill up with flames. “I was walking around burning like a human torch, and my first instinct was, ‘Ahhh!’” says the British singer-songwriter, who had accidentally set a new kitchen appliance on fire. “But instinct two was laughter, because I was thinking, ‘What’s worse than this?’ And the thing that was worse was the life I had just managed to get myself out of.”

That idea–of escaping one’s past life by any means necessary–ended up serving as the central premise for the the title track of Walk Through Fire, the singer’s debut album for Dan Auerbach’s Easy Eye label. Recorded in Nashville with a team of the city’s best session musicians, the record chronicles the personal and artistic rebirth that Yola has undergone over the past few years. Many of the songs, like “Shady Grove” and “Ride Out In The Country,” are belated breakup songs, addressed not only to a ex-lover but to a previous self.

“I started with the idea of a tardy breakup record,” she says, “the idea of putting some things to bed. Saying goodbye to that past version of myself and the relationships inherent in that period of my life.” 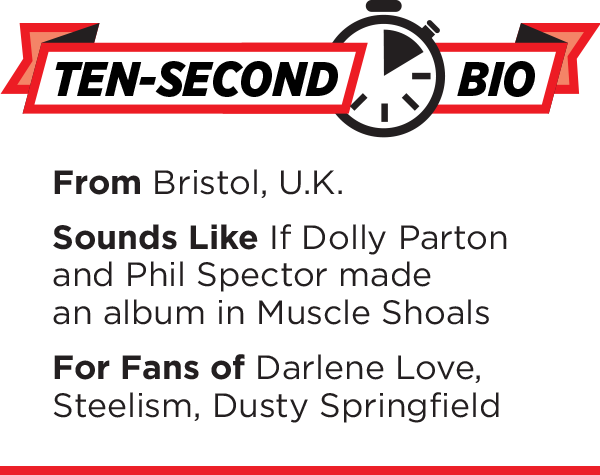 The title track, which she wrote with Auerbach and legendary R&B songwriter Dan Penn, became the most obvious way for her to address the direct split head-on. “Fire is like an instant cleanser,” she says. “You immediately are propelled into a new environment of awareness, so there’s no doubt how bad something is, and how extreme it is, and why you need to get away.”

Both the song and the album, she adds, are about “the hurt before the walk and the hope you feel after it.”

The 35-year-old artist, born Yolanda Quartey, has spent the past decade or so shifting between various behind-the-scenes roles as a singer in Bristol and London. By the time she turned 30, she says, her central musical outlet, the Bristol-based band Phantom Limb, had become a toxic environment, a white boys’ club (“like True Blood, except guitars”) in which her own work and art was devalued and trivialized.

“There’s a lot of that patriarchal dominance in Bristol,” she says. “The word ‘feminist’ was a dirty word, and you couldn’t say it. It was this forceful, endless, exclusively white bro-athon, and that paradigm permeates people who are otherwise lovely.”

Back home in England, Yola’s musical skills were being limited exclusively to her vocals, so in order to begin making space for her musical departure from the Bristol scene, she began writing her own music.

“I got to this point of realizing that I could create something for myself by just being a singer-songwriter, like bloody everyone else,” she says. “It wasn’t that revolutionary. And the C, D and G chords really aren’t that challenging.”

Her first attempt was her 2016 EP Orphan Offering, which introduced the singer as an up-and-coming singer-songwriter fusing roots in a new way, but the record’s songs didn’t have enough distance from the Bristol scene the singer had only just begun leaving. “The E.P. was about the agony of the situation,” she says.

Over the next few years, Yola plotted her next move, slowly assembling a team around her as she carefully plotted how she wanted to introduce herself to the world as a solo artist. After making a splash in the Americana scene with Orphan Offering, that meant turning down several high-profile offers to serve as a backup singer, a role that she feels has become one of the only ways in which dark-skinned women of color are given opportunities in music. “Try to think of somebody in pop who is my shade or darker who is a woman,” she says. “It takes work to think of someone. Doing backing vocals becomes this job that people try to coax you into doing all the time as a woman of color. It’s to the point where I’ve been places as the artist where people assume I’m doing backing vocals.”

After several years of plotting, writing and recording, Yola arrived upon her sound when she teamed up with Auerbach’s cohort at Easy Eye. Her thrilling debut is a meticulously crafted love-letter to 20th century American pop that fuses a half-dozen or so genres (early Seventies Muscle Shoals country-soul, Laurel Canyon singer-songwriter, Phil Spector pop, smooth R&B, Sixties countrypolitan) into a fresh blend that eschews contemporary trends.

“You want to represent sonically what you feel needs to be represented,” says the singer. “That’s how I see music, as an aesthetic and sound that you’re fighting for. For me, I love rich harmony, and so I wanted the album to sound luscious and big and grandiose. But I also wanted to push out the fact that I am different, that I am other. It’s important for women of color to be other, to be not blending in with an aesthetic that is ubiquitous. To be doing something that sets itself apart, and that is derived from musicians of color, but maybe from a different era, from sounds that are less common, or that feel like they’ve been disappearing.”

Growing up in Bristol, Yola became enthralled with her mother’s record collection of American country and rock: Dolly Parton, the Byrds, Emmylou Harris. As she grew up, Yola became a student of American roots music, and in particular, a student of the voice — the high harmony of the Everly Brothers, the varied vocal registers of Etta James.

On Walk Through Fire, she’s made a very different type of record than might be expected from an artist who might be lazily pegged as “retro soul,” steering clear of the ecstatic, shouting elements of Southern soul that many of her Americana contemporaries (Nathaniel Rateliff, Chris Stapleton) have gravitated towards in recent years. “I think it’s very easy vocally to come in hot, and stay hot forever,” she says. “I was very selective with how hot to run the instrument. I thought, ‘This is a good time to show all the different colors in my voice: soft colors, harsh colors, raspy colors.’ I really wanted to represent that nuance, to show my textural range as much as my tonal range and get people used to hearing that nuance.”

More than anything, the 12 songs on Walk Through Fire show the scope of styles, sounds, genres and influences that Quartey has been soaking in throughout all the left-turns, setbacks, and quiet triumphs in her still-unproven musical career.