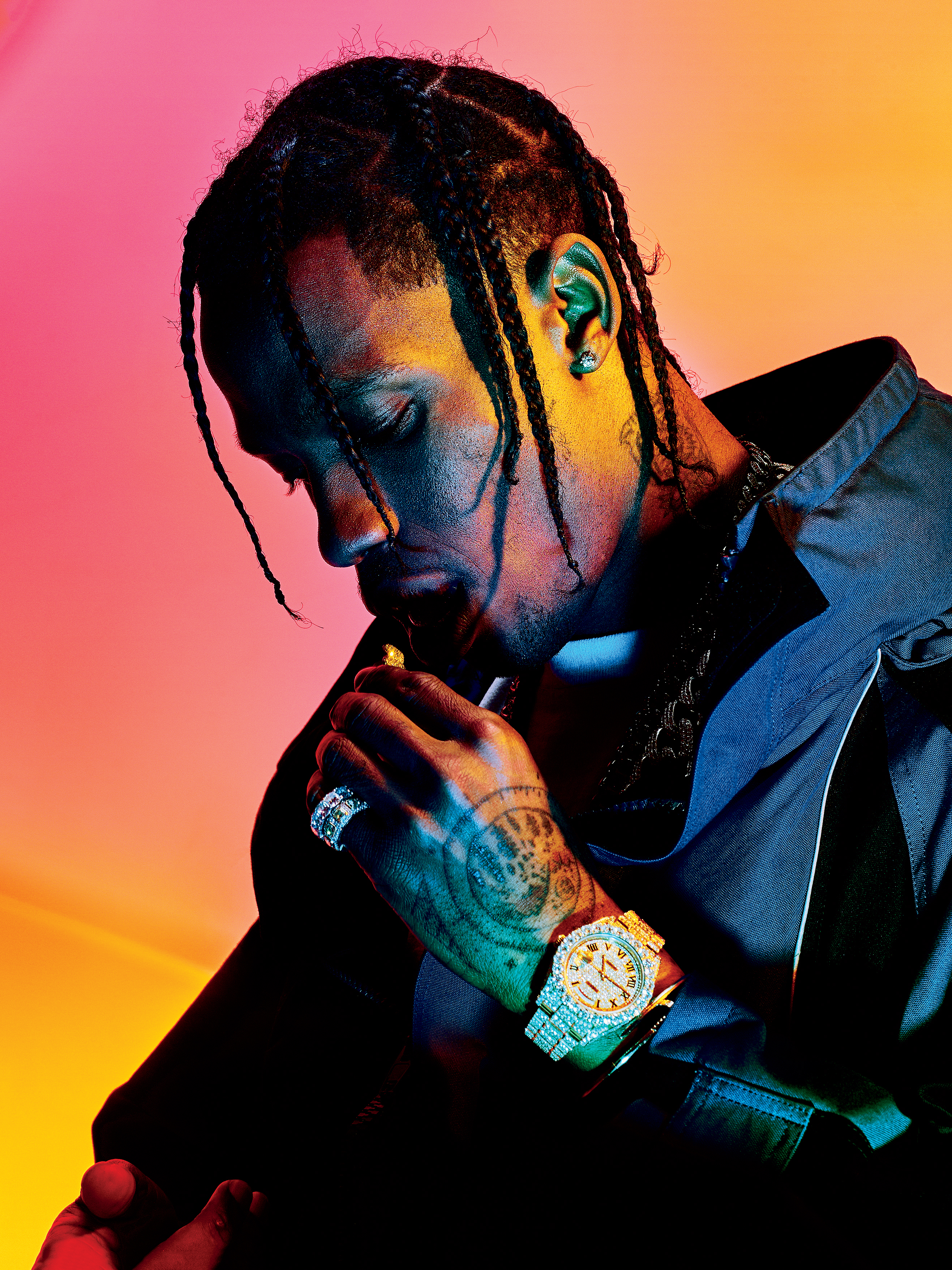 Travis Scott bursts into his dressing room on a scooter, trailing assorted entourage and radiating the rich aroma of good weed. He makes for a catering table lined with Fruit Roll-Ups, Honey Buns, Lucky Charms and – for good measure – two bottles of Don Julio 1942 tequila. He’s at the Oracle Arena in Oakland, about to face a sold-out crowd. “Let’s get this bitch turnt!” he yells at no one in particular, letting the scooter fall to the carpet. Scott’s manager, David Stromberg, brings Scott’s attention to a dry-erase board, tucked behind a curtain, where a basketball play has been diagrammed in marker. Oracle is home to the Golden State Warriors, and Stromberg says that the Cleveland Cavaliers used this space as their locker room during the finals in June. The diagram, titled “BRON ISO,” contains LeBron James–centric directives such as “KYRIE PASS IT” and “JR GET THE FUCK OUT THE WAY.” “This is, like, the last thing Tyronn Lue wrote,” Stromberg says, referring to the Cavs’ coach. Scott, taking it in, laughs hard. “ ’Get the fuck out the way!’ ” he cries.

He’s winding down a 20-show tour opening for Kendrick Lamar. Originally from Houston, Scott rolled into the Bay Area early this morning, following a show in Vancouver. He spent all of today holed up on his bus, he tells me, working on new tracks that might wind up on his next album: “Just chillin’, recording. Formulating a story, the picture I’m trying to paint. It’s fun making music on the road – I got a whole studio bus.” He plops down on a couch, gets lost in his phone. “The energy’s been a little strange show-to-show on this tour,” Stromberg says. “I mean, Travis brings the energy, but there’s been seating at every show. He wants to get his fans onstage and get them to stage-dive – but there’s chairs.” He theorizes that “it’s a numbers thing – I think you can sell more tickets when you do seats than when you do general admission.” Scott says, “I can’t speak to that,” but confirms that he prefers the unmanaged vibe of a big, chair-free pit, where crowds can more readily cut loose: “Pffft,” he says. “I’m never doing a tour with seats again.” “Travis’ fans are a little younger,” Stromberg continues. “Kendrick’s are a little older, and they’re here for” – he throws up air quotes – “ ’real hip-hop.’ ”

Stromberg is drawing a distinction between Lamar’s dense, classicist virtuosity and what Scott does best, which is different: deliver simple, beguiling phrases about partying and drugs in an Auto-Tuned singsong over hard-edged, low-lit beats. It’s a style you hear everywhere in hip-hop these days, from Migos to Future. It’s also a style that Scott – whose debut mixtape, Owl Pharaoh, came out in 2013, the same year he worked behind the scenes with Kanye West on Yeezus – helped pioneer.

Scott has been on a roll ever since. He’s dating Kylie Jenner. (And, it turns out, having a kid with her, according to reports published after our interview.) He has co-written or co-produced songs not only with West but also Rihanna (whom he’s also rumored to have dated) and Madonna. His albums Rodeo and Birds in the Trap Sing Mc-Knight mix pop impulses – honeyed, hypnotic hooks – with irregular structures and droning flows that verge on avant-garde. Both are platinum, and they’ve both produced platinum singles, like the narcotic “Antidote” and the Lamar-assisted “Goosebumps.”

Scott has also become known for a live show so raucous that – if you believe law enforcement, anyway – it’s literally criminal. He was arrested this past May, after a show in Rogers, Arkansas, on charges of inciting a riot for encouraging fans to rush the stage. Police say that several people were injured, among them a security guard and a cop. (Scott, who pleaded not guilty, faced similar charges in 2015 following a concert in Chicago.) Shortly before the Arkansas show, Scott encouraged a fan at a New York concert to jump down from a second-floor balcony, before ordering audience members to form a human net to catch him. A different fan fell from the third-story balcony and reportedly wound up with a broken leg, but charges weren’t filed.

When I ask Scott if the Arkansas incident has changed his behavior onstage, he answers without a moment’s thought. “It hasn’t,” he says. “People gotta understand, sometimes shit gets out of control. I’m not trying to cause no harm – I just perform.” He thinks for a second, then muses about a potential solution: getting even more popular than he already is. “I think I just gotta get into bigger spaces, have more space to get it in. Try to prevent some of that shit. I just wanna bring the stage to, like, the masses. I feel I have a show for the masses. It’s probably at a point now where your uncle might know Travis, you know?” 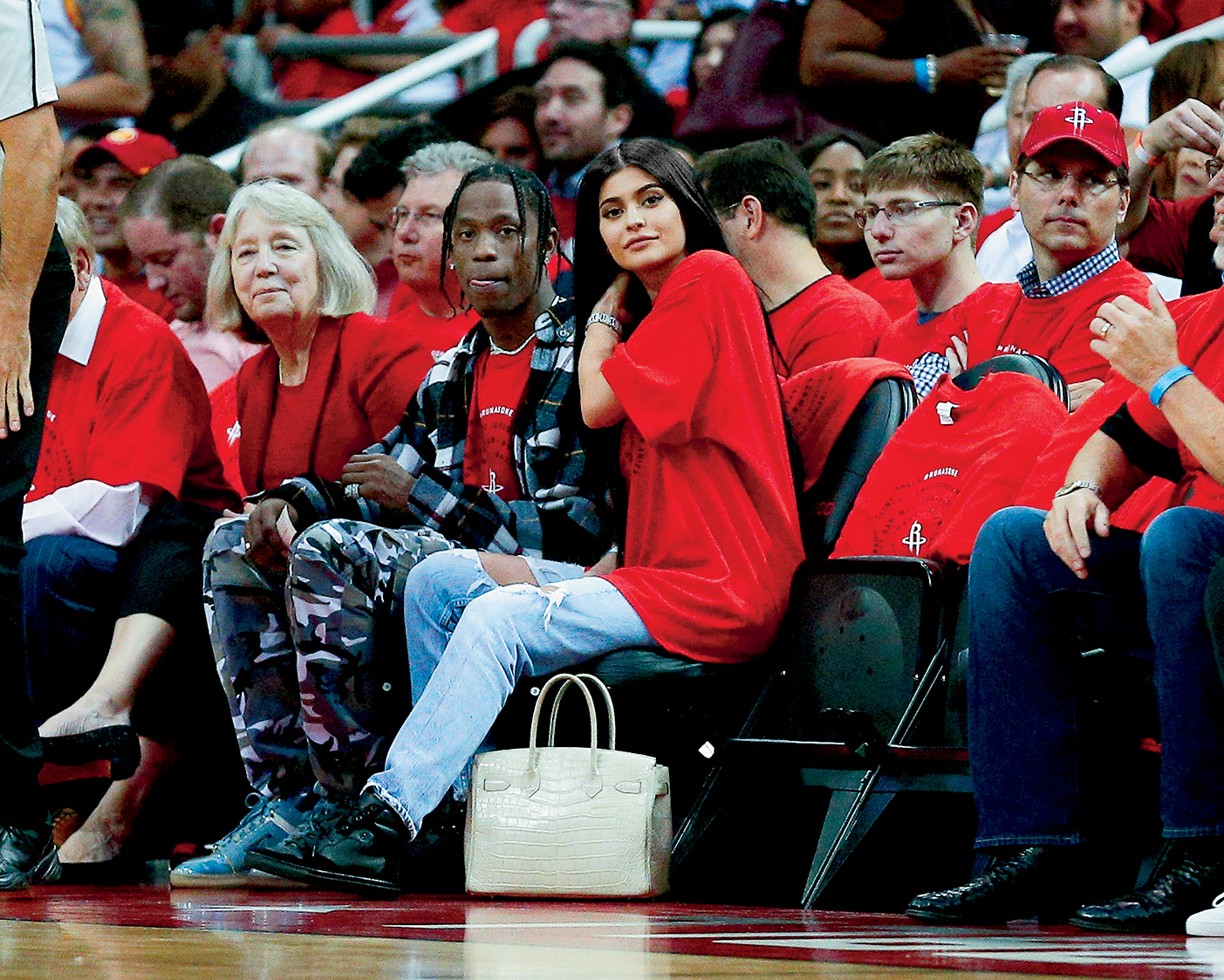 On one hand, Scott has taken such troubles as a publicity opportunity. After the Arkansas arrest, he sold fans a limited-edition T-shirt printed with his mug shot and the slogan “Free the rage.” (Scott likes the word “rage,” whether he’s describing a cathartic onstage outlet or calling his devotees “ragers.”) But there’s an element of the negative attention that he doesn’t like, too. “I wanna be recognized for some of the good shit I do,” he says. Such as, he goes on, the enormous animatronic eagle that he had commissioned for his live shows, which looks a bit like a Henson creation, and which he rides above the stage, wings beating. “Man, I got a flying bird out here!” he says. “Name someone that’s 25 doing that shit.”

There’s something childlike about Scott. The Rodeo album art and the music video for his single “90210” featured a poseable Travis Scott action figure. (In an un-childlike detail, it engages in some graphic action-figure boning before the video’s through.) You can buy the action figure yourself, although the original run sold out, which means shelling out hundreds of dollars for one on eBay.

Scott says he was inspired to make the animatronic bird after he paid a visit to Legoland in San Diego. He’s a big theme-park fan, to the extent that he’s also been to the Denmark Legoland and titled his next album AstroWorld after a now-defunct park he used to visit in Texas. “It had a Dungeon Drop, Greezed Lightnin’, Superman,” he recalls. “It was a way of life – fantasies, imagination.” AstroWorld doesn’t have a confirmed release date yet, but Scott says that whenever the accompanying tour happens, he wants his concerts to double as bona-fide amusement parks, with rides encircling him as he performs. “I don’t know why it hasn’t been done already – I think people just don’t do shit. Who makes stages these days that are cool?”

Scott was born Jacques Webster – his stage name was inspired by an uncle – and grew up in Missouri City, a middle-class Houston suburb. His father was an entrepreneur, his mother an Apple employee. When Scott was three years old, his dad bought him his own drum kit, which he played, as well as the piano, before quitting the latter, deciding that it couldn’t help him get girls, whereas drum skills, which translated to beatmaking, would. As he puts it, “I was trying to fuck bitches, make beats, get fresh.”

In high school, Scott acted in a local theater troupe. “I was a thespian, bruh,” he recalls. “I was in this play Kiss Me, Kate – you heard of that? I did Oliver! I love that type of shit. I love drama.” Scott’s current DJ, Chase B, tells me they have been friends “since we were nine,” adding that Scott “was a super-creative kid. When he acted in plays, he would always be the lead – that charisma was already showing through.” 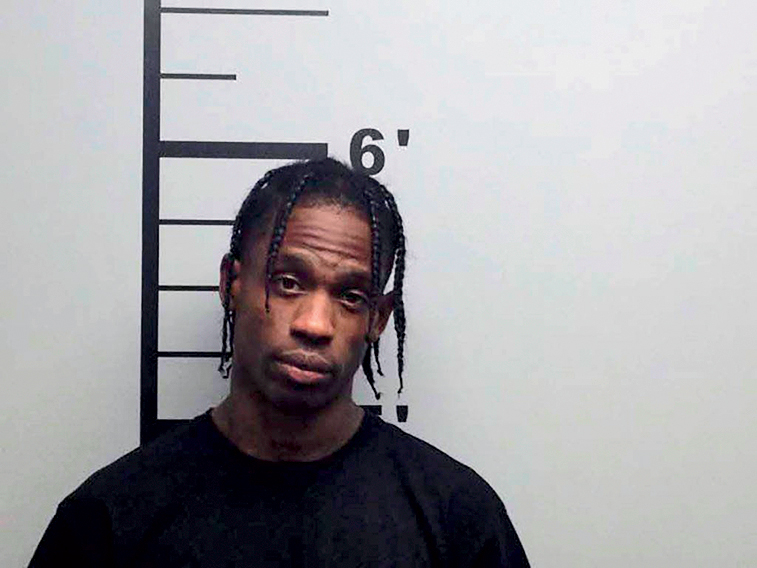 Today, Scott directs his own music videos, a predilection he ties to a lifelong love of auteurs like John Hughes, Quentin Tarantino and Robert Rodriguez. “My favorite movie was The Breakfast Club,” Scott says. “You ever seen Spy Kids? Nigga, that shit is crazy.” When it came to music, his early hip-hop influences were flashy New Yorkers like Mase and Cam’ron. They gave way to Kid Cudi and West, who pushed contemporary hip-hop’s emotive and melodic quotients into overdrive and eventually inspired Scott to bring grit, pain and darkness to his own music. (He also lists Portishead, Björk, Coldplay and the Sex Pistols among his favorite acts.)

Describing a category-busting creative ambition today, Scott says he wants to try his hand at architecture. He has a dream of studying it at Harvard. Which architects does he admire? “I honestly check for no one,” he says. “I’m a master of my own imagination. I go off my own shit. I’m not into deep study – all that, like, reading? That’s how shit ends up looking like someone else’s shit.” He smiles. “You ever see pictures in your head? I be having that all day. It’s like a museum. That’s why I don’t do too many drugs, because my brain would explode. I’m my own drug. If I bleed and someone licked my blood, it’s like liquid MDMA – know what I’m saying?”

You get a sense of what he’s talking about when he takes the Oracle stage tonight, mounting his eagle and soaring high above the crowd, and shrieking, “My name is Travis Scott, and I like to fucking rage!” Stromberg, standing beside me in the center of the floor, says that in their ideal version of the show “the bird would be flying directly over the crowd,” though the insurance logistics have proved insurmountable. Still, Scott likes pushing up against the constraints he’s been given: “Security, we not stopping the fans from having fun tonight!” Scott bellows. “It’s time to stand on top of these motherfucking chairs!”

Back in his dressing room some 45 minutes later, he tears his sweaty T-shirt off and stalks the floor, revved up. He walks over to a fridge, cracks a Powerade and chugs it. Stromberg pops his head in the doorway to announce a visitor. “Jack Dorsey, the CEO of Twitter, would like to say hi.” Dorsey, dressed in a Bieberish ensemble of skinny jeans and extra-long T-shirt, enters. “I didn’t think I’d ever meet you,” Scott tells him. 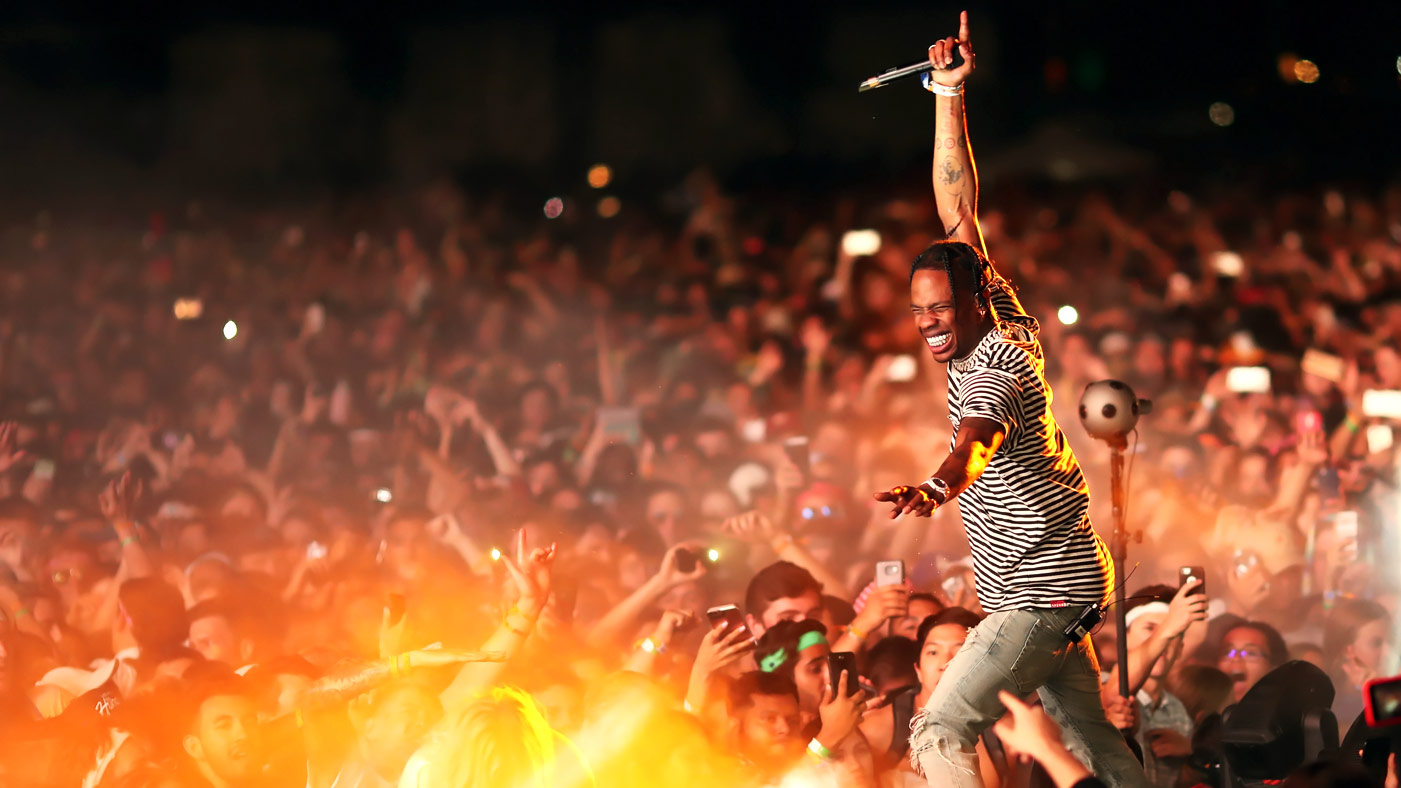 “Thanks for your music – and for using Twitter,” says Dorsey.

“What you got going on tonight?” Scott asks.

After Dorsey leaves with some complimentary merch, Scott FaceTimes Jenner. The two have kept the details of their relationship under wraps, but butterflies seem to be part of it: They both got matching butterfly tattoos; his newest single, which makes numerous seeming allusions to Jenner, is called “Butterfly Effect”; and he recently bought her a reported $60,000 diamond chain, shaped like the insect, for her birthday.

Her face pops up on his iPhone screen, nestled into a pillow. “I just got offstage,” he tells her. “I miss you. I love you.”

Members of Scott’s entourage start loudly poking fun
at Stromberg – apparently there was some sort of pushup challenge earlier, and
some of the guys have jokes about his abilities. The clowning distracts Scott,
who puts Jenner on mute so he can more fully partake. “Did you put me on
mute?” she asks. “Nah, I didn’t put you on mute – it was just a sound
delay,” he says, chuckling. Someone likens Stromberg’s pushup style,
absurdly, to that of Mr. Potato Head, at which point Scott cracks up, falls to
the floor, drops the phone, keeps laughing – and then seemingly forgets about
the call. A minute later, he stuffs the phone into his pocket. I can see that
Jenner is still connected. He directs his crew to the tour bus. It’s a
nine-hour drive to Las Vegas, site of tomorrow’s show. “Let’s roll out!”
Scott cries, and they’re gone.