On Monday, Travis Scott ruined my life. That was the day the rapper announced he would be holding a concert in Fortnite, the wildly popular battle royale game, and my editor informed me that I would be covering it. My response was immediate.

“Not going to lie, this is my worst nightmare,” I wrote.

For as long as I can remember, organized camaraderie, loud noises, and any video game that wasn’t catching pocket-sized animals ranked among my worst anxieties. Attending Super Smash Bros. sleepovers as a child? Freelance assignments covering struggle rap shows for a paltry sum? They both had the same color of dread. Travis Scott and Epic Games, the maker of Fortnite, had seemingly conspired to set me up with a combination of the two.

It’s hard to overstate how popular this collaboration — dubbed ‘Astronomical’ — was. According to Alpha Data, which powers the Rolling Stone charts, Travis Scott saw an immediate (and significant) bump in listeners following the announcement. On Monday and Tuesday, Scott streams increased by 26%, with some hits (like “Stagazing”) jumping over 50% ahead of the Fortnite show. The kids really love this game.

So at 6 p.m. on Thursday, two White Claws deep, I downloaded a video game that, up until that point, I had avoided all knowledge of (the only thing I knew about it was that it animated dances from black teens without compensation, which wasn’t helpful when it came to getting to the Travis Scott show). It took two devices to get Fortnite to work. My download on a Nintendo Switch never managed to get past the display screen, perhaps overloaded because of the event. Instead, I downloaded it on my iPhone, which felt like a scorching brick after dedicating so much memory to… whatever it is I’m doing here. An hour later, after my trip down the Fortnite hole was complete, it felt like I knew even less about the game than when I started.

My first impression of Fortnite was a full-on sensory assault. The loading screen bombards you with enough advertisements to fill a thousand Times Squares. Everything is neon. Everything is seemingly for sale: weapons, skins, storylines. Deadpool was there.

For the uninitiated, Fortnite operates like a crazed pre-pubescent warzone. From the start, you’re bombarded with the sounds of gunfire and beeping and honking and clanging, all in a world made up of graphics that seem ripped from that 1994 Canadian show ReBoot. I began to run from the chaos — I knew there was a beach that I had to find, where the Travis Scott concert would allegedly take place. Someone decided to shoot me in the face, and I was unsure of how to protect myself. I died, and was resurrected.

On my second go-around, I ran behind a building — everyone else seemed to want to kill me, and I wanted to hide. I looked at the map. The internet informed me that the concert would be surrounded by large, golden Travis heads, just like the cover of Astroworld. Then, I was parachuting out of a bus. If this sequence of events is hard to follow, that’s because I don’t understand what was happening either. 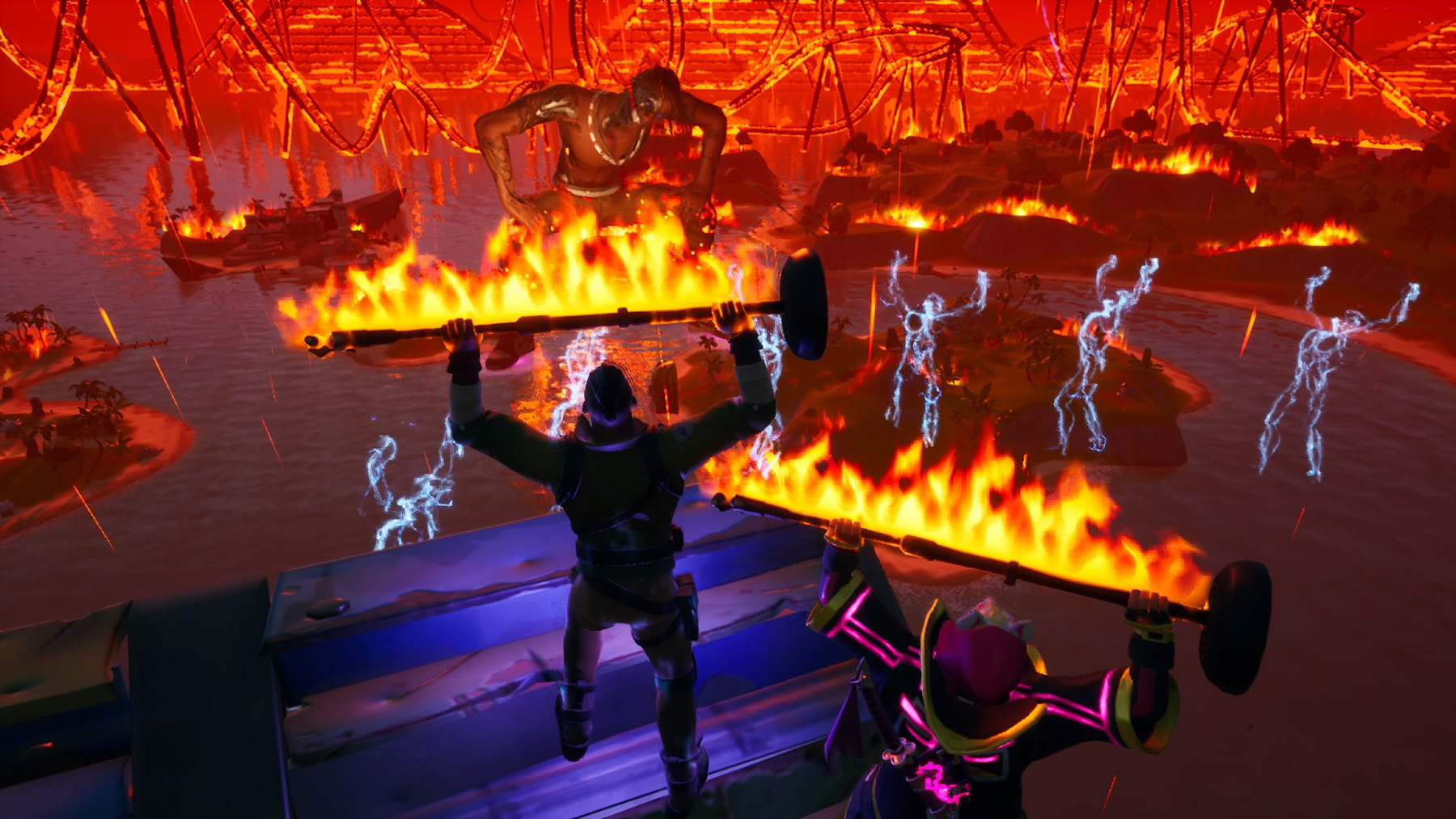 From my vantage point in the sky, I saw a structure in the distance that looked identical to the circular rollercoaster from Scott’s last tour. I parachuted toward it, and watched a mass of people holding flaming mic stands all waiting for the show to begin. There was a timer projected above the stage, counting down the minutes to the beginning of the show. One of the people in the crowd put away their mic stand, pulled out a gun, and shot me in the head.

The third time I was resurrected, the Mountain Dew mafia seemed to be coming down from their sugar rush. The show was about to start, and the collected mini-Scotts awaited their king. To the opening strains of “Sicko Mode,” a digital Travis finally arrived in the form of a purple comet crash landing on an island. When the explosion settled, a skyscraper-sized Travis — complete with bulging muscles and a lot of humping motions — began his performance.

The experience, which lasted about 10 minutes, was more animated short film than concert. Scott’s face melted away to reveal a robot skeleton that would make Schwarzenegger proud, and his giant avatar performed hits like “Goosebumps” through neon lasers, and “Highest In the Room” underwater. It was overtly trippy. It felt like marketing. Even in the confines of a video game, giant Travis was a detailed capitalist, making sure to wear an assortment of his coveted Jordan collaborations that currently fetch $500 to $1,000 on the resale market. In the game, the shoes appeared several stories tall.

To end the show, Travis went to space, bringing you with him whether you wanted to or not. It was then he premiered the biggest draw of the evening, a new collaboration with Kid Cudi called “The Scotts.” In the distance, a planet made in Travis’ image was visible with an Astroworld carnival situated on the crust and a boombox operating as the celestial body’s core. Yet as soon as the planet seemed within the player’s grasp, it started to crumble, claimed by a cataclysm. Then it was all over. I was back in the world of Fortnite, no longer besieged by Travis Scott. The player nearest to me realized they could use their weapons again, and killed me.

A few minutes later, I checked my email and wasn’t surprised to find giant Travis there, too, waiting. A $65 Travis Scott x Fortnite Nerf gun was for sale next to a $75 action figure. In the description — below “batteries not included” and “final creative may vary slightly” — a notice informed buyers that the products wouldn’t ship until October.

According to a statement from Epic, over 12 million people watched Travis Scott’s performance live. I hope all of them — except the three that murdered me — had a better time than I did.