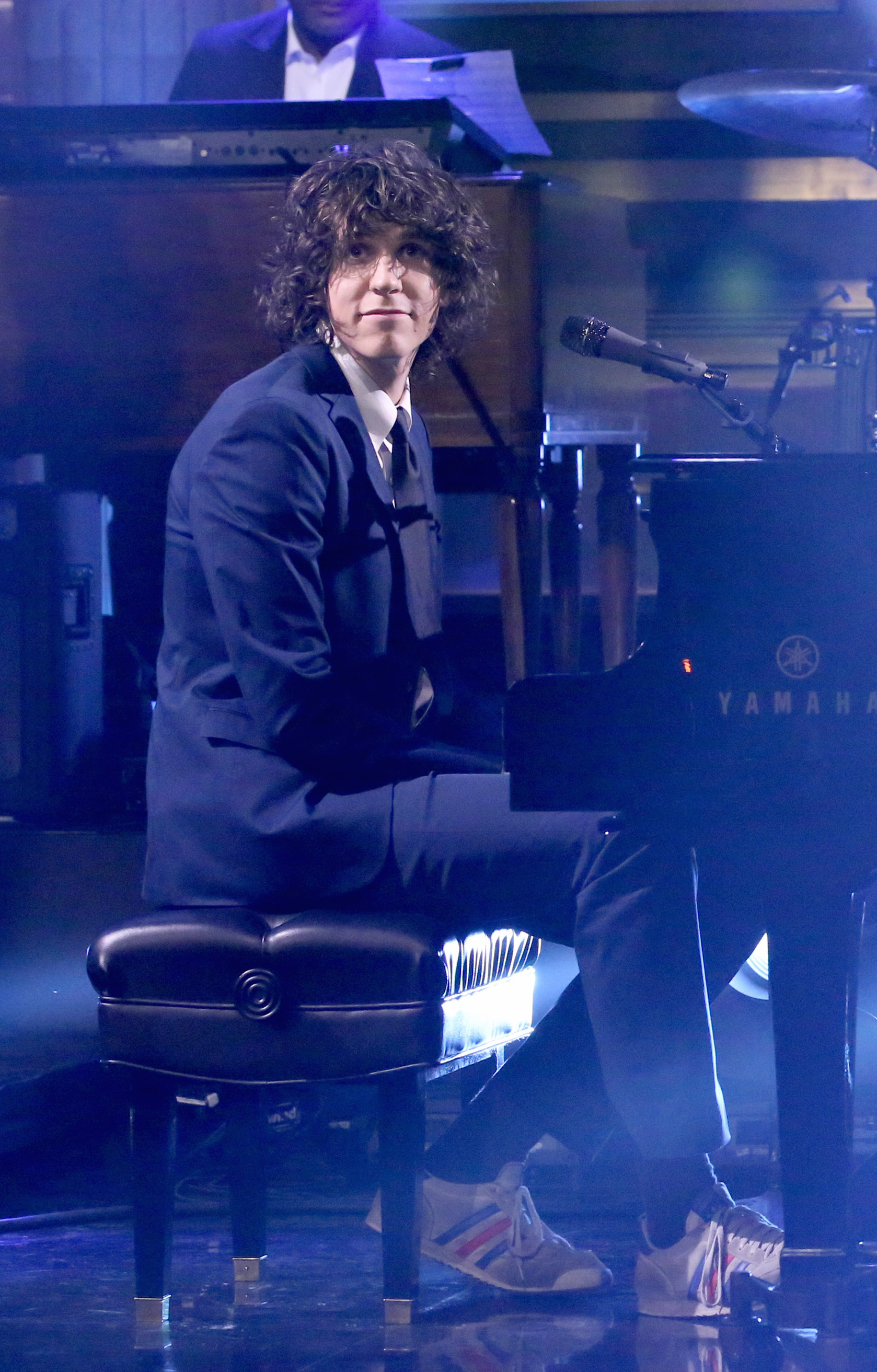 Tobias Jesso Jr. has been experiencing a lot of firsts lately. Not long ago, the 29-year-old was about to give up on music, having moved back to Vancouver after a disappointing – and briefly disastrous – stint in Los Angeles. But fast forward three years and his debut album, Goon (out March 17th), is one of the most anticipated of the year, full of sunny-but-wrenching piano-pop ballads along the lines of stirring single “How Could You Babe.”

He recently made an impressive television debut on The Tonight Show, and he counts Taylor Swift and Adele among his fans. So who is this tall, affable Canadian and what’s his deal? Jesso stopped by the Rolling Stone offices earlier this month to explain.

He learned guitar to impress a girl, naturally.
At six-foot-seven and with floppy surfer hair, Jesso definitely looks the part of the laidback musician – but he wasn’t always the tall drink of water he is now. “I was chubby in high school,” he admits. “I used to go to my information technology class, and I would type really fast to get the lesson done quick because the teacher had a little acoustic guitar and there was a girl I had a crush on in the class. I would take the guitar and pretend to be some great singer-songwriter, serenade her with joke songs.” Soon he was playing all over campus, and he eventually even bought the acoustic off his teacher for 50 bucks. “It never interested me to get particularly good at the instrument. I just needed what I needed from it. It was as much trying to find something as an identifier, you know? ‘I’m the guy who has the guitar.'”

His biggest break came merely from looking like someone who would be in a band.
Jesso eventually found his footing as the bassist in a pop-rock group called the Sessions, who went on to win a music competition in Germany. This led to an opportunity to be in a music video for an aspiring pop star named Melissa Cavatti – Jesso and his bandmates were paid to stand behind her and pretend to play instruments. Cavatti’s father offered the group a salaried gig as her backing band. “We had a management team at the time that was like, ‘This guy wants you to in their band,'” Jesso recalls. “‘He’s offering this salaried job to move to L.A. with his daughter and just play. You don’t have to write for her, you don’t have to associate your band’s identity with her or anything like that. You just move down there, and it’s a job.”

They hesitated but eventually went for it. “Most money I ever made in my life,” Jesso says. It was then that he began to make friends and connections in Los Angeles, and when the opportunity fizzled out he stayed in California, where he tried to make it writing songs for others.

While in Los Angeles, things went bad in a hurry.
Jesso enjoyed this time of his life, but he wasn’t progressing artistically. “L.A. can make you feel like you’ve already made it,” he says. “You’re living off 40 dollars a week, it’s nice weather. You go outside on your bike, you go to the coffee shop and everybody is doing nothing. It doesn’t leave a lot of room for ambition.” Without offers to write songs or a visa that allowed him to get a job, Jesso felt aimless. He began to look for what he calls “a universal sign” – and it came in the form of disaster. “In one week, I got hit by a car – it busted through my hand – and my mom got cancer,” Jesso says, shaking his head. “My visa had expired, and I was living with my girlfriend while we were going through falling-out stages, kind of relying on her support.” Jesso moved back to Vancouver to be with his mother during her recovery, feeling like he’d failed as a guitarist and ready to give up songwriting altogether.

He’s brand new to the keys.
“To think about what’s happened in the past two or three years is completely unfathomable to me,” Jesso says. “Back then I was 27, and to start an instrument that becomes the thing you’re known for is out of this world.” But that’s what happened: While living at his parents’ house, Jesso began to play around with his sister’s piano. “I was writing songs to catalog things that had happened in my life for the first time,” he says. “So I could listen to them in 10 or 20 years, as a little time capsule.” He would spend entire days in the basement, regaining confidence while writing about his recent breakup. “Toward the end there, I had started doubting [my ability]. It was like, ‘I think I can do good, but it’s just for my personal taste, not for the industry’s taste,'” he says. “And it’s funny, because then I start writing piano songs that sounds like adult contemporary, and it accidentally is the industry’s sort of thing.”

Word of his music spread through a series of blind taste-tests.
After recording some piano songs, Jesso sent out an email to bassist and producer Chet “J.R.” White, formerly of the band Girls. “I just put the songs in the email, ’cause I kind of felt confident about them,” Jesso says. “But at the same time, it was like, ‘It’s whatever if he doesn’t write back, he probably gets a million of these.'” White ended up responding within an hour. He told Jesso to keep working on songs for a record and began testing tracks out on his friends in San Francisco. White wouldn’t tell people Jesso’s name and the simple piano ballads had almost no online presence, so all their hype came via word of mouth. Jesso eventually came up with 46 possible tracks, and when border patrol relented, he flew back to California to record with White, Patrick Carney of the Black Keys and Ariel Rechtshaid.

He’d never listened to Nick Drake or Harry Nilsson until White recommended them.
With its sunny melodies and heartsick subject matter, Goon earned comparisons to Harry Nilsson, Nick Drake, Randy Newman and Todd Rundgren – artists Jesso wasn’t even familiar with. “I wasn’t a big music-digger,” he admits. “When it came to oldies stuff, I didn’t know Todd Rundgren and Harry Nilsson and stuff like that, but when I was writing, J.R. [White] would say, ‘I get this Todd Rundgren vibe.’ He would send me those songs, and then I’d learn the chords.” Still, Jesso says, he wants a contemporary record and plans to move away from the throwback.

He’s only just getting comfortable performing.
The first few shows he did to promote Goon took place in kitchens and living rooms, but his first official performance was at the Pitchfork Music Festival in Paris. “I think I want to play a moderate amount of live shows,” he explains. “Just for the people who really enjoy the songs and want the core of that to come out. I don’t think I’m going to be a road warrior.” Mostly, though, he just wants to keep writing: “Some people get on the whole touring circuit for years and years and years on one record. What interests me is sitting down at a piano, writing songs, getting into a studio and exploring new sounds to come up with something I’m really proud of. I decided to make live shows a part of it because I wasn’t sure I would ever play live.”

He saw performing on Late Night With Jimmy Fallon as an opportunity to convince people that he’s as tall as he claims.
Thanks largely to a retro publicity poster advertising his extraordinary height, Jesso’s power-forward frame has become a point of contention. “I had this little campaign going on, but it was just a joke that my label put out that mentioned I was six-foot-seven,” he says, laughing. “So I was getting negative feedback of [people] saying, ‘No, he’s not!’ I thought that Fallon was going to be the proof in the pudding! I’d get to stand up next to Jimmy Fallon and then say, ‘See?!’ And then I did and no one said anything about it.”