Kurt Cobain’s ratty MTV Unplugged sweater recently sold at auction for more than $340,000. It’s a jaw-dropping haul for a music-adjacent item… until you consider that “The Scream,” a painting by artist and political cartoonist Gerald Scarfe and the focal point of Pink Floyd’s The Wall marketing campaign, previously sold for $1.85 million, making it one of the most expensive non-instrument items in rock history.

“The Scream” was among a handful of The Wall-era items from Scarfe’s personal collection that were sold in 2017; soon, the artist will offer his entire Wall archive – a staggering 3,000-plus items of sketches, paintings, storyboards, memorabilia, animation cels, stage props, and more — through the San Francisco Art Exchange.

“I’d like it to go to a good home,” Scarfe tells Rolling Stone of The Wall collection from his new home on the Thames River, where the artist and his wife, Jane Asher, moved recently. The home downsize — and the incredible success of the previous Wall sale (“I didn’t want to let ‘The Scream’ go, but when I saw the price…”) — fueled Scarfe to divest himself of his massive archive.

“I’d like it, if possible, to be kept together,” he says. “It could probably get cut up and divided, but my ideal would be to sell it to one collector who keeps it, because it’s got every concept of The Wall from when I first met Roger [Waters]. Small notes, sketches and so forth, which I then developed into bigger sketches. I’ve got tapes; I found whole cans of film the other day, rust-covered cans of 35-mm film in my attic, just bits of film that go back to Wish You Were Here.”

Scarfe’s collaboration with Pink Floyd began when the band approached him after the BBC aired the artist’s animated film A Long Drawn Out Trip in 1974. As Scarfe recalls, Waters told Pink Floyd drummer Nick Mason, “We got to work with this guy; he’s fucking mad. We need him onboard.”

“When they first came to me, I wasn’t quite sure what they wanted, and I don’t think they knew what they wanted either,” said Scarfe, who first created the aforementioned in-concert films as well as an animated video for “Welcome to the Machine” for the band’s 1977 In The Flesh Tour.

Waters and Scarfe remained friendly — “We played a lot of snooker and drank a lot of very strong beer” — and out of those hangouts, The Wall began to foment. “One day Roger turned up at my house in Chelsea with the raw tapes,” Scarfe says. “He’d been telling me for some months, ‘One day, I’m gonna finish this and I want to show you the whole thing, and we’re gonna work on it together.’ He promised all that while he was writing it, because he realized the power of the image alongside the music.”

Working off the musical landscape and the backstory Waters established, Scarfe — a political cartoonist by trade with a flair for darkly comic caricature — developed The Wall‘s iconic imagery and characters, a twisted menagerie that would keep the attention of concertgoers while Pink Floyd literally built a wall between themselves and the audience: the Marching Hammers, the boogeyman Teacher who feeds his dead-eyed children to the meat grinder, the anus-mouthed Judge and the main character Pink, an unformed human that Scarfe’s animation tosses around like a marionette dummy untethered from its strings. “We couldn’t just have a blank wall sitting there,” the artist said. 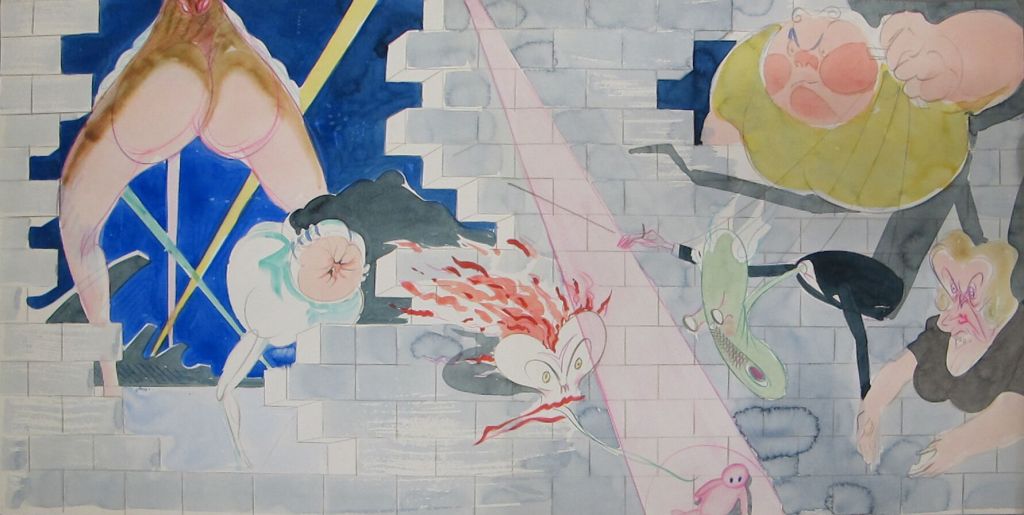 Scarfe’s archive collects everything from the five-year stretch that bridges Waters’ doorstep arrival with the demo tapes to the aftermath of The Wall‘s Alan Parker-directed 1982 film adaptation: The early hand-drawn sketches, the paintings that feature inside The Wall‘s vinyl gatefold, storyboards, film scripts complete with Scarfe’s illustrations, props from both the extravagant Wall tour and the film. Scarfe’s collection also boasts “five years of ephemera” that ranges from Scarfe’s framed The Wall gold records, figurines, backstage passes, a custom-made Wall tour jacket and some obscure items from the film shoot.

“I have the table lamps from [singer and The Wall star] Bob Geldof’s room in the film,” Scarfe said. “The table lamps at the end of production were for sale for $5, so I bought them.” Also included is Scarfe’s copy of the legendary “Black Book,” a pre-production volume of Scarfe’s fully realized storyboards and sketches that Parker trafficked around Hollywood studios while trying to secure funding for The Wall film.

Early in The Wall‘s path to the cinema, the band recruited Scarfe to serve as co-director on the film, with his vision of the movie vastly different from the 1982 adaptation.

“My concept was really including the live rock show, and it would spring from the stage into real life,” Scarfe said of his film, which would have combined Pink Floyd’s now-famed Wall concerts with his own animation. “So I did a lot of the filming of the show. But I realized I couldn’t handle it. I couldn’t handle the animation and the direction. And the other thing was, of course, the people who were giving the money wanted a known name, and Alan Parker [initially the film’s producer] was a known name in Hollywood. So I backed out, but I was glad because I was getting overwhelmed by the amount of work.”

Much of the creative loggerheads that occurred during the making of the film are documented in Scarfe’s book The Making of Pink Floyd The Wall. However, one point of contention that never arose is the artwork for the Pink Floyd album itself: Even though Scarfe created a gallery’s worth of unforgettable images and characters, Waters opted instead to adorn The Wall with its now-famous album cover: a sparse, stark white wall, meticulously bricked and cemented with faint gray lines.

“Roger’s idea was that it should always be a blank wall, which is very symbolic,” Scarfe said. “Of course, people were worried, ‘Would it sell?’ So eventually [Waters] made a move to add “Pink Floyd The Wall’ in my lettering on a piece of cellophane in the shrink-wrap.”

Inside the gatefold, however, Scarfe was given free reign, injecting his illustrations and even handwriting all the album’s lyrics and production credits; the Scarfe font, his natural handwriting –— which Waters later reused for his 1984 solo LP The Pros and Cons of Hitchhiking — is nearly as enduring as the artwork itself. Most of that final album artwork — plus the reams of early concept designs, collages, paintings, watercolors, pencil etchings, and more created during the making of the album — features in the Scarfe archive.

Forty years after The Wall, Scarfe remains active, and while his recent work no longer includes marching hammers or meat grinders, he still draws talking assholes on a daily basis: Scarfe has been creatively rejuvenated as a political cartoonist thanks to — and unfortunately because of — the current political situation on both sides of the Atlantic, where caricatures straight out of his Wall art have taken hold of power. “I must tell you, Mr. Trump is my muse. Every day, he says something or does something,” Scarfe says. “For all media, the crazier characters are the better ones. And we have [U.K. Prime Minister] Boris [Johnson] here, so in a way, I’m surrounded by walking cartoons. They do the job for me.”

Additionally, Scarfe’s new book, the 565-page retrospective Sixty Years of Being Rude, arrives this November, a month that also marks the 40th anniversary of Pink Floyd’s The Wall. “People have asked me, ‘Is it Roger’s vision or yours?’ And the answer really is it’s mine, because it had to come out of my mind,” Scarfe says of the visual side of The Wall. “It’s my interpretation of Roger’s thoughts. Roger is undoubtedly the originator of the idea because it’s his story, but the visuals are out of my mind and my experiences.”