Because its title is both shocking and hilarious, “Girlfriend in a Coma” is perhaps the most famous – and most scandalous – of all songs recorded by the Smiths. It’s because of that shock, hilarity and scandal that the song deserves celebration on the 30th anniversary of its August 10th, 1987 release.

The legendary status of “Girlfriend” – included on the band’s fourth and final album, Strangeways, Here We Come – began with singer-lyricist Morrissey‘s daring to provoke. He pretended to offend the tradition of conventional pop song subject matter; his daring was part of how the Smiths enlivened 1980s music, setting new standards for the language of popular communication. Morrissey won pop star status for romanticizing unconventional, misunderstood passions. His songs for the Smiths were trailblazing inspiration for the acceptance of social perspectives and emotional sensitivity that cool hipster rock had forbidden.

But not even the Smiths’ devoted cult of alternative listeners – who enjoyed the stimulation of hearing a fresh, original approach to pop – were prepared for this salvo. By going against the hedonist, romantic clichés that typically ruled the pop charts, “Girlfriend'”s surprising, indirect poignance makes it a rare example of an alternative pop song whose reputation infiltrated the culture.

If the title itself seemed bizarre (an item supporting Elvis Costello’s snarky allegation that Morrissey comes up with great titles then forgets to write the song), Girlfriend’s” balance of solemnity and derision is not so morbid as detractors suggest; it actually lays out a challenge to group-think sentimentality. Composer Johnny Marr introduces sweetly charming and deceptive melody that Morrissey’s first lines cunningly subvert, adding “la-la-la-la-la.”

After a blues-based repetition of his title and thesis, Morrissey confesses the all-too-human exasperation sometimes felt in relationships even when not fraught with medical emergency.

“There were times when I could have strangled her/But you know I would hate anything to happen to her.”

Morrissey jokes, but this is a no-joke irony. Its ethical demand is up there with “You’re the One For Me, Fatty” as a bias-busting, precedent-setting, world-changing report on personal affection.

It’s a new kind of love song, stranger – and more strangely affecting – than most because it zeroes in on the complex vagaries of love: Love equal to friendship; friendship equal to love. This understanding of human relations is more advanced than everyday pop. Morrissey opens up pop heterosexual clichés – queers them – with an open mind and kind-heartedness that reveals the song’s true meaning, its open secret. 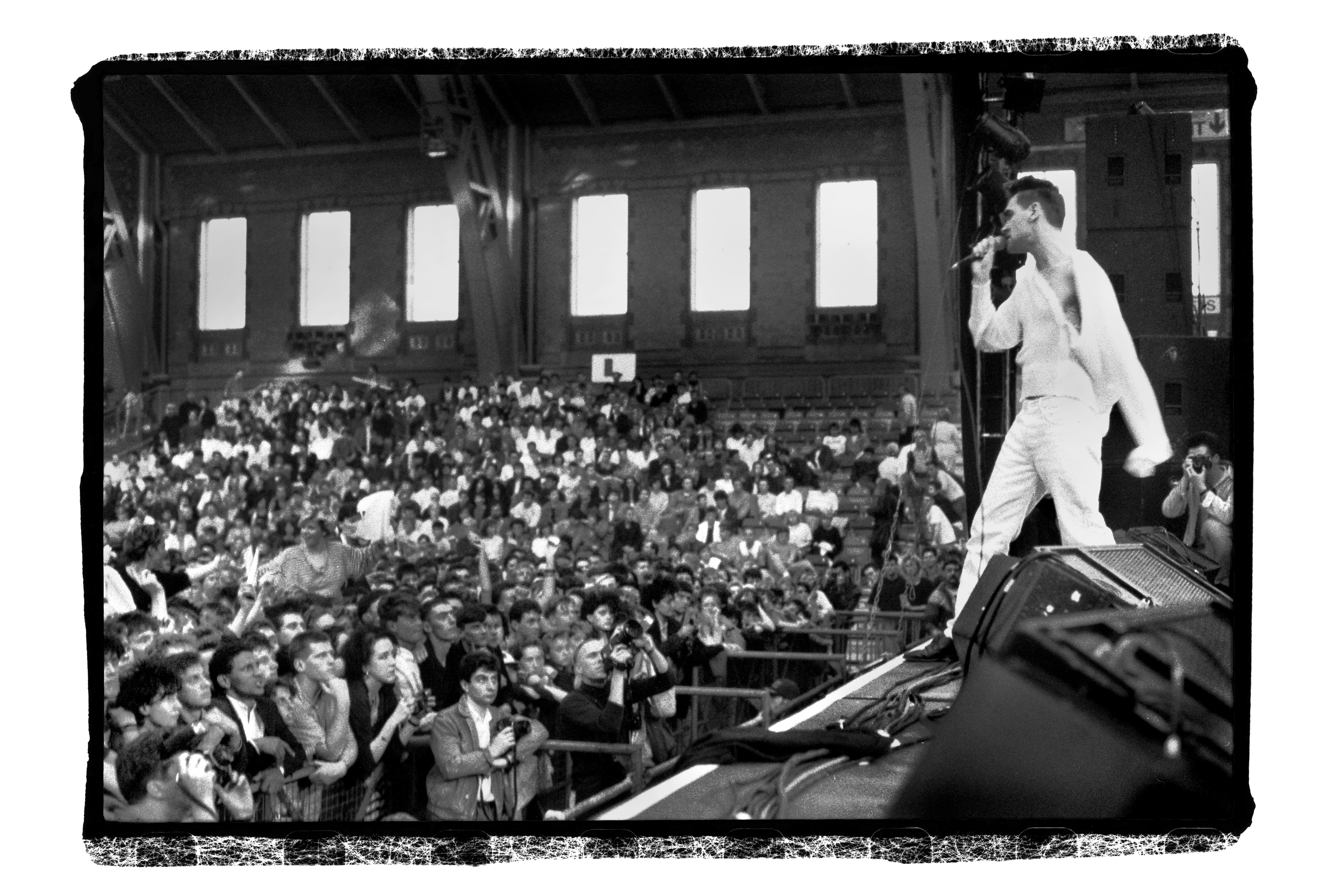 “Girlfriend in a Coma” is an AIDS song. It’s a response to the crisis that took the lives and broke the hearts of so many friends and lovers – the holocaust of the 1980s. In contradistinction to Elvis Costello’s notion that Morrissey could not complete an introductory thought, the song’s terse, subtle elegance goes on to address a worldwide trauma.

Poet-provocateur Morrissey displayed a pith and potency that refused to wallow in self-pity, just as Marr’s delightful guitar melody refused to supply a dirge. But beneath the calm, white-knuckle surface, the pain is there, waiting to be discovered – especially by listeners who know how the record’s complex emotions actually felt. (For those who don’t, who are too inexperienced or unaware, the infectious tune teaches a lesson in sympathy.)

Good pop music is frequently full of jokes and impudence (“I’d like to drop my trousers to the Queen/Every sensible child will know what this means,” as Morrissey joked in “Nowhere Fast”). But true wit in a pop record is rare and “Girlfriend in a Coma” has got it. The realization of suddenly threatened illness and possible death emboldens the seemingly simple, “shocking” subject so that this brief, two-and-a-half minute, song tests the substance of modern living, surviving and grieving during the Plague.

“Girlfriend in a Coma” is an AIDS song. It’s a response to the crisis that took the lives and broke the hearts of so many friends and lovers – the holocaust of the 1980s.

Heard in the full context of the album Strangeways, Here We Come, the Smiths’ final LP and to my mind their finest-yet achievement, “Girlfriend” is the jaunty coda that follows the longer but no less subtly profound “Death of a Disco Dancer.” On that track, the band takes up gay, dance-music subcultures that suffered the phenomenon of sudden bereavement and connects their experience to the stunned mainstream – much as Prince’s “Sign O the Times” also did that same year (it contained Prince’s eulogy “a man died from a big disease with a little name”).

Morrissey’s large, spiritual view of the world’s turmoil resembles Prince’s litany of sorrows, but Morrissey’s quotidian catastrophes (“I’d rather not get involved/I never talk to my neighbors I’d/Rather not get involved” – with a woeful swoop on “in-vooolved” as if emotional engagement had come a social faux pas – describes the condition of a fragmenting society that likely was getting worse: Indifference to AIDS tragedy – which the song reproaches –anticipates the next millennium’s extreme political polarization. Morrissey is always indie pop’s most moving, unsettling moral conscience.

Not many pop artists were capable of coming to grips with the AIDS tragedy; they were either mortified or incapacitated by anger – the first step of grief and political activism. But the latter is too obvious for Morrissey who had already agitated for PETA (his glorious anthem “Meat Is Murder” also avoided the usual protest song vulgarity). An ACT-UP anthem wasn’t to Morrissey’s temperament; his tone is more insinuating and Oscar Wildean sly. That’s why “Death of a Disco Dancer” climaxes with clashing piano chords recalling Bowie’s “John, I’m Only Dancing,” while “Girlfriend” eases into Morrissey’s so effective, plaintive mode: “Would you please let me see her!”

He borrows the desperate waiting-room cry of anxious loved ones. “Do you really think she’ll pull through?” underscores the implied concern – that’s where Marr and producer Stephen Street strike an urgent note with violin strings, not weepy, but hard. It wipes the smirk off sarcasm. Morrissey resumes his feigned distance then, in no-pressure mode, grasps the fateful reality: “Let me whisper my last goodbye/ I know it’s serious…”

That last line is beautifully sober – not mawkish or snarky, which are too often styles of adolescent resistance to admitting they have deep, hurtful, embarrassing feelings. “Girlfriend,” by design, brings you up short. And Morrissey brings anyone’s misjudging of his song craft – even Elvis Costello’s – to a halt.

In the music video for “Girlfriend,” director Tim Broad and Morrissey rejected a literal interpretation of the song and chose clips from the 1964 film The Leather Boys, a prime example of Morrissey’s favored British New Wave kitchen sink realism, this time about a young man (Colin Campbell) who marries too soon and faces doubts about his masculinity, egged-on by his equally immature wife (Rita Tushingham). Her wide-eyed, accusing stare symbolizes the song’s feminine pronoun (“her/she”) so that the video’s images construct postmodern (it was the Eighties, remember?) conflict between genders. The video portrays the friendship and commiseration to which the song is a remarkable testimony.

Few pop songs are about grief, but Morrissey’s attempt to acknowledge grief with humor and tenderness is why “Girlfriend in a Coma” is extraordinary.