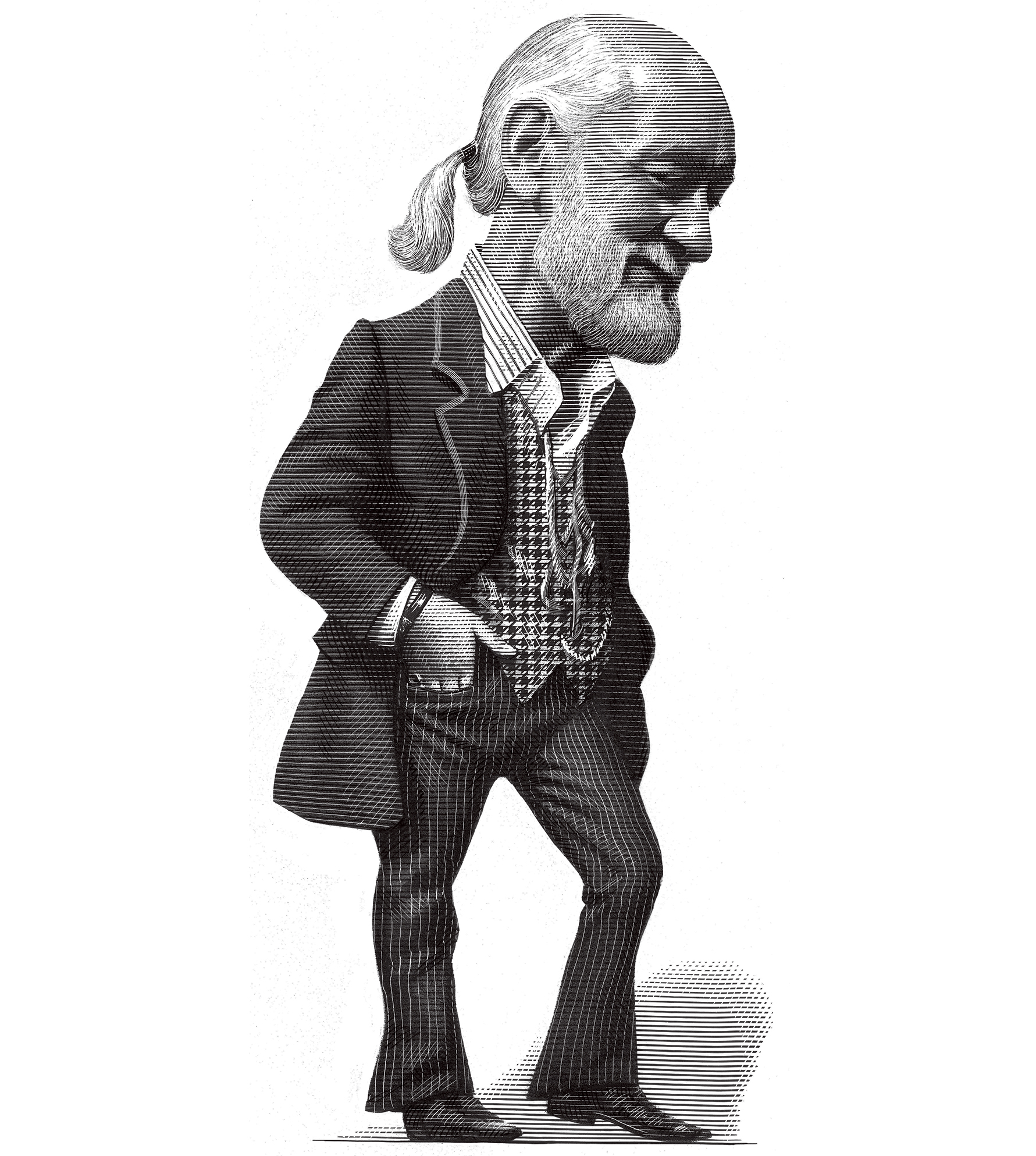 It’s been two days since Fleetwood Mac played in front of a sold-out crowd at Citi Field in New York City and drummer Mick Fleetwood is leaning back in a chair high up in an Upper East Side suite hotel room marveling at the fact that the group pulled the gig off. With the exception of a show at L.A.’s Dodger Stadium two weeks earlier, they hadn’t played since the final show of their 2015 tour. “With all due respect to John [McVie], I doubt he picked up the bass more than five times in the past two years,” he says with a chuckle. “But that son of a gun was like a Rolls Royce, that smooth. The rest of us had been working like slaves.”

One project that has taken up his time since the last tour is the new photo history book Love That Burns: A Chronicle of Fleetwood Mac Volume One, 1967–1974. It tells the epic saga of Fleetwood Mac from their earliest days as a blues rock band all the way to their first meeting with Stevie Nicks in 1974. “For the most part, this is not a horrible well-known story, at least in America,” he says. “It’s time for the story to be told.”

What’s the best advice you ever got?
It came from my father. He was a pilot officer in the Royal Air Force. When I started to be what could be construed as famous-ish, he said, “Never forget you get up and go to the toilet in the morning, Michael.” Which means, just keep it in perspective and have a good sense of humor and remember that you are a human being, and keep it in line. If he had added, “And don’t take too many drugs,” that might have been helpful too.

What’s the most indulgent purchase you ever made?
I bought a thousand-acre farm in Australia in the early 1980s. It was this whimsical decision to start a whole new life. The property had about eight houses on it and a fishing lake. I cashed out about 3 million bucks and bought it. I actually immigrated to Australia and gave up my green card. I thought it was a great place for all my friends and family, but it was also a pipe dream that literally took me to the poorhouse. I went broke. It was beautiful, and I don’t bemoan the fact that I did it. I also don’t bemoan that I’m not sitting there right now getting eaten by toxic spiders.

What have 50 years in Fleetwood Mac taught you about compromise?
I don’t think it would have been possible without the wit of healthy compromise. My father was a fine officer and in charge of organizing large groups of people. He said, “No matter what, as long as you get it done, you don’t need to take the credit.” Some people say, “You’ve had to suck eggs to keep some elements of your story going.” John [McVie] and I can say in good humor we’ve caused some pain, but it turned out pretty good.

Your philosophy seems to be “No matter what, the band carries on.” That was true even when Stevie Nicks and Lindsey Buckingham left for a time.
That’s the nature of being in a rhythm section. You need someone to play with. John and I can’t do this in our living room. Also, John and I sticking it out comes from abject fear. What the hell would we do if there was no band? For the most part, amazingly, it worked out, which is a form of alchemy and magic that I will never really truly understand.

“What the hell would me and John do if there was no band?”

You raised teenage girls in the 1980s, and you’re raising teenage girls now. How is it different?
They are frighteningly well-informed now, first of all. If I say something as a parent or a friend – I like to think of myself as both – it puts you on your mark because they can, in 40 seconds, see whether or not you’re full of shit. But I’m way better at being a dad now than I was with my first lovely two daughters. That’s because I’m not as crazy as I used to be, and hopefully not as selfish.

What do you understand about drugs now that you didn’t understand when you started out?
They end up being a nightmare. Maybe we would never have cut certain songs if we hadn’t been up for five days. But you think now, “Does that make it OK?” And it wasn’t OK. You shouldn’t romanticize those things. I’m lucky to be sitting here talking to you now.

What do you wish someone had told you about the music business before you started?
Look out for charlatans who will send you down the road. Yet actually, the real nuts and bolts is I am quite happy that I didn’t have that advice. I’d like to think I could have handled the warning, but if I had been warned, I might not have even signed anything.

Stevie Nicks told me she has no interest in making another Fleetwood Mac album, since it takes too long and nobody would buy it. How do you feel about that?
I’m not super keen on getting into all of that. But what I do know is that the music of Fleetwood Mac, and the music from everyone that coexists in and outside of that band, is everyone’s prerogative. She is gonna be there next year when we begin a tour and spend the better part of 18 months wandering the planet. And this band has to be able to [allow] that and have no blame game at all. If you want me to say, “Hey, the utopian dream would be that before we hang it up, we all play [new] stuff [in the studio] …,” but we play onstage! God knows we’ve sacrificed huge chunks of time for this strange animal known as Fleetwood Mac, so I’m OK with it.

Christine McVie has hinted that the tour in 2018 might be a farewell. Is that true?
No. I don’t know where that is coming from. In my mind, it’s not, and everyone in the band has decided that it’s not. But we thought we were finished 30 years ago. And so it’s a Rolling Stones model. I don’t know if morbid is the correct word here, but when everyone is in their seventies and you think about five years from now … You know, at some point I wish I’d seen Frank Sinatra. And I didn’t. And lo and behold, one day Frank’s dead. Phil Collins is calling his tour “Not Dead Yet.” Well, we’re not dead yet, but god forbid, we might be, so you could be like, “I better go and see them!” But you will not see a poster saying this is our farewell tour that I could dream of.

Are you thinking at all about the set list yet? Will it be very different than the last tour?
Yeah. I was in Italy recently and met Stevie out there.  Actually, she was in Capri and I was close to there. She said to me, “Let’s sit down and really listen to some stuff that sort of almost got forgotten.” So I know she’s already thinking she wants to do some things we haven’t done in years. I always think that Stevie and Lindsey should do a Buckingham Nicks song in the set. And have Christine should do a blues song. I hope it certainly won’t be the same show as we did before.  We always played nearly three hours, and we cut it back a little bit for the wear and tear, but we do over two hours. And when you got three singers, which is, like, three bands, really, to get that perfect set, it’s a trip.

“I think people invest in Fleetwood Mac because there’s an intrigue there. We put our dirty laundry out there for everyone to see.”

You play nearly every Rumours song in the set. Ever think about just playing the album straight through?
It would be fantastic. But we’d have to be like Bruce Springsteen, out there for seven hours. Then it could be the last tour. You’ll see wooden boxes onstage. Five of them.

You turned 70 this year. Does it feel different than you imagined it would?
Yeah, it does. Physically, I think I’m healthier than I was at 50. [Grabs chest, fakes a heart attack before laughing hysterically] But I am surprised that, like Phil, I’m not dead yet. I hardly know the date of my own birthday. This is an awful admission, but I don’t know my children’s birthdays. When I was young I never remembered anything either. I was just talking to my daughters in the car, saying that when they are 24 or 25 I’ll be 80. Whatever happens, in 15 years I’ll probably either be dead or sitting in a chair somewhere near a spittoon. Maybe by some miracle I’ll be like my mom, 98 years old and then you just drop.

No matter how clever you are, however fit you are, you’re doing going to die someday. It hits me when someone asks me about Fleetwood Mac’s future plans. It hits me that if we tour and then maybe do something else and then possibly live out a pipe dream of a Broadway play, that’ll take five or six years. I’ll be on the red carpet and 76, even closer to death than I am now. You start thinking about things like that at 70.

Let’s not wrap up on your inevitable death, so I wanna go somewhere lighter. I feel like I hear Fleetwood Mac’s music more often now than I ever have, and young people seem to just idolize Stevie Nicks more than I’ve ever seen. How do you explain that?
The comedic answer is that we wouldn’t go away. I do like to think that our story is a human story. It sounds corny, but I think people invest in it because there’s an intrigue there. We put our dirty laundry out there for everyone to see. We were naive in many ways. I can’t believe the papers didn’t hound us. They never followed Stevie around or found out what we were up to. It’s sort of a miracle.

Picture all that happening now with TMZ? They’re torture you.
Can you imagine that with early Fleetwood Mac? But even back then we were so open about it that we sort of blew their biscuit. You never got pictures of Stevie in Phoenix or wherever having a love affair, but we have our own version of it. Anyway, it’s old news now.