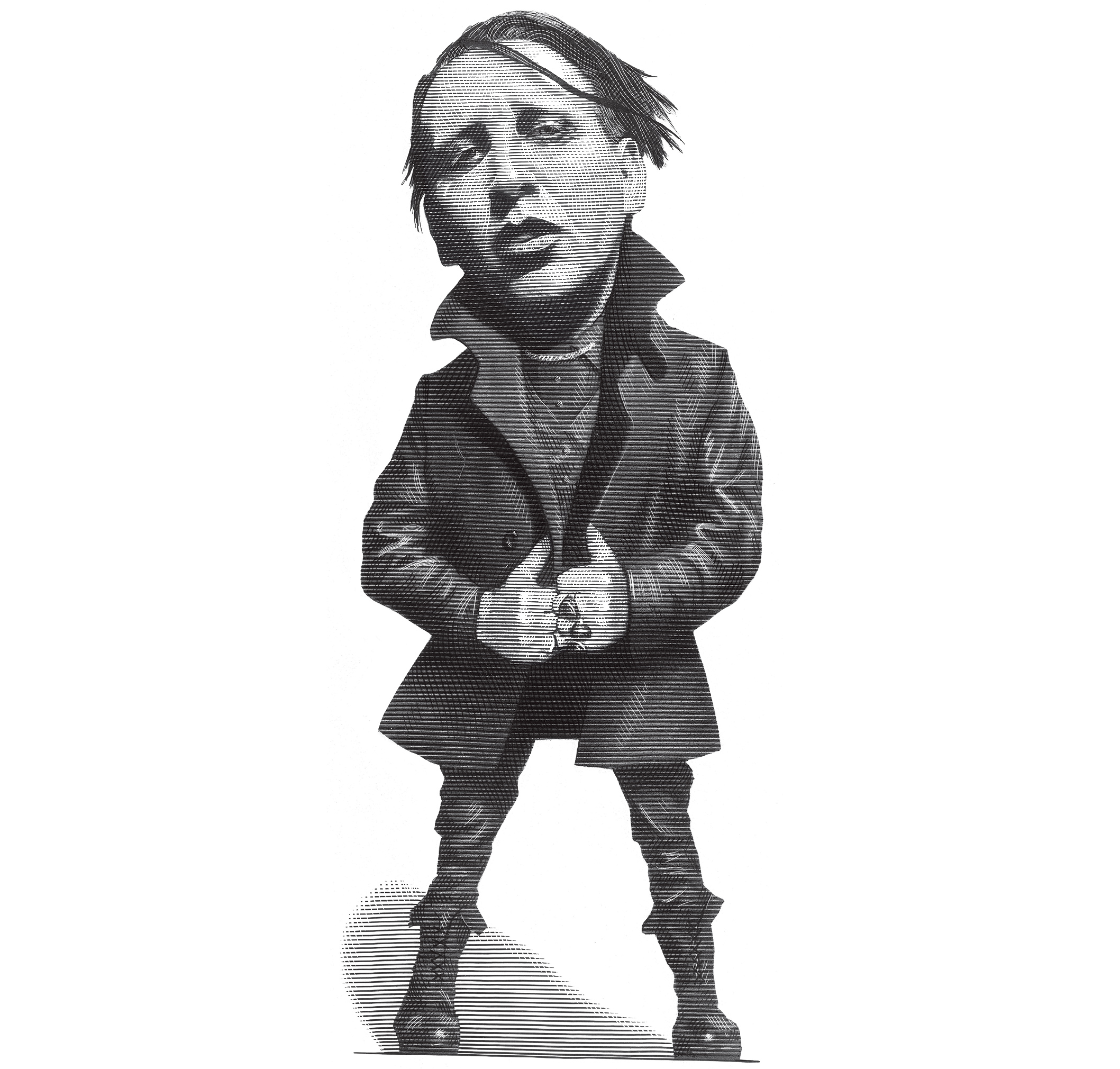 A couple of weeks before a gun-shaped prop fell onto him at a New York City concert – sending him offstage in a stretcher and forcing him to cancel nine shows as he recuperates – Marilyn Manson phoned up Rolling Stone for a Last Word interview. The occasion was his new LP Heaven Upside Down, but we covered everything from his love of David Bowie and Beethoven to buying props from TV’s Hannibal and getting crabs from a cheerleader in his hometown of Canton, Ohio.

Who are your heroes and why?
Musically…Bowie, Alice Cooper, Iggy Pop. I’ve tried to focus on maybe a mythical entity or concept, starting in Christian school, with the idea of Lucifer – which is technically not really in the bible, but he was the fallen angel who told God to go fuck himself.

Can you talk a little about Bowie?
The first video I saw on MTV was “Ashes to Ashes.” I was really drawn towards the sound of his voice, and I had not listened to a great deal of music at the time, not because of my parents, but because I was at Christian school. My mom played three things a lot: Billy Joel’s The Stranger, the Bee Gees and the White Album. Those were the three things that I had heard, previous to first seeing and hearing David Bowie.

With “Ashes to Ashes” he’d created a radio pop hit that was so unnatural, so different, so full of unease and tension. And yet, it had some sexiness to it. He didn’t seem to look like he was was dressing in drag, or even trying to be funny dressed as a French clown walking down the beach. It was like I was watching a movie or reading a book. Now, when I make a record, I want it to be like a movie. When you see or hear this song, it’s like a scene in a movie, and if you accomplish that scene well, you’re going to want to see the next scene, see what happens next. I think I got that from seeing Bowie early on.

What are the most important rules that you live by?
Rule number one: Don’t make beats that confuse strippers. I’ve told this to several drummers, like Josh Homme and Dave Lombardo from Slayer. Rule two: Don’t make a movie that does not include some sort of romantic element, whether it be a sex scene, or it be nudity. The essence of everyone’s hopes and dreams is to find somebody to share their lives with, unless you’re a complete sociopath…which, I consider myself a very well-trained psychopath, but psychopaths don’t have an emotional element to their actions. Rule three would be to remember the first two rules, but also to remember your own advice. Finally, smell the flowers before you stomp on them.

What’s the best advice you ever got?
As a kid, me dad told me, “Son, when you get your first job, fire somebody so everyone fears you.” Now, I think I interpreted it wrong, because I think what he meant to say is, “Inspire awe in the people that you work with. They don’t need to fear you, but they need to respect you and be in awe of what you do, by knowing that you’re doing something at your best capacity, and doing it without any fear and without any question.”

The best addition to that is, I don’t like when people ask the question “why?” If I ask for something, and someone says why, you answer will be, “Because I said so.” When you’re trying to accomplish something very intense, my brain is working in crazy ways that I can’t explain. If I stop to explain it, I’ll forget where I started. The way I ended up, now, interpreting my dad’s advice after he passed away, is that you do something, you look good while you do it, and you inspire respect and awe in people, better than firing them. If they don’t go with the flow and if they don’t do their job, and they’re not inspired by you doing your job well, then they’re not meant to be on your team. That’s a better way of looking at it.

What was your favorite book as a kid?
Alice in Wonderland, because it speaks in great words. Alice in Wonderland and Through the Looking Glass have been somehow blended together, but you have to go back to the origin of it. The book never really describes how anyone looks in it. They never say how Alice looks, they never describe her as having blonde hair, the Mad Hatter is never described as wearing a hat. It really made your mind create images, and that’s what I love about it the most.

What music moves you the most now?
My favorite song of all time is “Moonlight Sonata,” by Beethoven. Every time I hear it, it soothes me and also gives me dark thoughts, too. “Moonlight Sonata” speaks so much without saying anything.

What do you do to relax?
I usually watch a film. I’m sitting, right now, in front of a white wall in my house where I project movies onto instead of using a television. My friends that have the most money in the world, they come to my house and are astonished by the fact that I have a projector player and a white wall. They’re like, “Wow, how did you do that?” I’m like, “It’s just a fucking projector playing on the wall.” I like to watch movies here because there’s no strangers around. I think the thing that differs with music is that music has a different quality that brings people together.

“I said to [Hannibal director Bryan Fuller], ‘Tell Anna [Chlumsky] that I was rich enough to buy her arm and jack myself off with it.'”

Movies have too much visual and narration. It’s odd when someone laughs obnoxiously at someone in a movie or talks when you go to the theater. I just find tranquility in the house completely dark, putting on something on the TV. It takes my mind off of whatever is happening in life. I get lost in the story, and that gives me a moment of relief.

What’s the last great movie you watched?
I was quite impressed with The Strange Color of Your Body’s Tears. It’s a foreign film that tells the story with images and very few words, but has a lot of suspense and it made me nervous, and it had an arousing element to it and a scary element to it. It kept me on the edge of my seat, wanting to know what could happen, and being astonished at every moment at a kaleidoscopic adventure that I have no idea where I was going. It’s like taking a pill and not being sure if it was ecstasy or acid or arsenic. That’s what that movie felt like to me.

What’s the most indulgent purchase you ever made?
I don’t have any vehicles. I’m not the typical person that goes and buys cars. I don’t have a driver’s license. So I think the most indulgent purchase I made recently came from an auction of some of Hannibal Lecter’s items [from the TV show Hannibal]. I bought the kill suit that he wore to make sure to not get blood on your suit and your shoes, his apron that he used when he cooked that also had blood on it, the knife, a severed tongue and Anna Chlumsky’s arm. She had an arm severed on the show. I ran into Bryan Fuller, the creator of the show, and he said “Oh, I heard you that bought all the stuff – I’m the one who created Hannibal.” I said to him, “Tell Anna that I was rich enough to buy her arm and jack myself off with it.”

Also, through a friend of a friend, the woman in the movie that puts the lotion in the basket gave me the actual lotion from The Silence of the Lambs. I don’t know if she stole it from the set or whatever, but it made me really, really happy.

“I’ve smoked human bones and taken acid. I don’t want to do either again, because all your demons appear when you smoke bones or acid.”

You’ve had several long relationships with women. What have you learned from them?
I learned to use logic before emotion. If you’re in a fight, it’s almost a scientific fact that it takes men about six minutes to just walk it off. If women start crying, you give them 15 minutes, they’ll stop. If you even try to coddle or be nice in a fight situation, it won’t work.

Problems can be avoided by not arguing, and you have to look at life as being very short. I’ve also learned that you have to take the responsibility if you want to be in charge of your own life. Every relationship is 50-50. You cannot fight alone. No one wins.

Do you consider Marilyn Manson to be separate from Brian Warner, your real name?
No. People can call me whatever they want. People who know me usually call me M or Manson. In the past, I didn’t want to be called Brian Warner, because that was a person I left behind, symbolically. That’s not as important to me now because I’ve realized that names are just semantics.

What drugs do you refuse to try?
Bath salts would be top of my list. I don’t want my flesh to fall off. I’ve smoked human bones and taken acid. I don’t want to do either again, because all your demons appear when you smoke bones or take acid. The older you get, the more demons chase you around and you have nightmares.

Is there anything about Donald Trump that you admire?
I do admire the fact that he created Trump Tower, because when I did an interview and it went wrong and I got arrested for putting a gun in the mouth of an editor of Spin, I hid from the law there. That’s the one good thing he built. [Manson was sued in 1999 for threatening to kill an editor of Spin, and his bodyguards were accused of assaulting the editor. They settled out of court. Manson was not arrested.]

You’ve lost both of your parents in recent years. What has that taught you?
I learned that time is valuable, so spend it wisely. I also learned that when you’re at the point in your life where you get to do what you want to do, enjoy it. Don’t miss out on the dream when it’s happening.