Earlier this winter, Robert Finley was backstage at Seattle’s Showbox nightclub discussing his remarkable personal history when the subject of his age came up. The soul singer said he would be turning 64 soon – on February 13th, in fact. “Robert, that’s tomorrow,” said his friend and bandleader Dan Auerbach, breaking into laughter. “With Robert,” Auerbach explained, “every day is his birthday, and is a bit of a celebration.”

Finley has plenty of reasons to celebrate lately. After spending almost all of his life living in obscurity within 50 miles of the tiny town of Bernice, Louisiana, Finley has been playing sold-out rooms across the country as part of Auerbach’s Easy Eye Sound Revue (That tour just wrapped last week; Finley begins a solo headlining tour May 20th in New York). Tonight in Seattle, Finley sang six songs, bringing the house down with his booming range, posessing what Auerbach calls a “deep yearning.”

“He is the greatest soul singer I’ve ever seen,” says Auerbach, who co-wrote and produced Finley’s 2017 album Goin’ Platinum and released it on his label, Easy Eye. “Dan, is a very kind man,” Finley says as they stand in the hallway. Finley is legally blind, and as he speaks, he reaches for Auerbach, and they embrace.

Over the course of a couple hours of conversation, Finley tells the extraordinary story of his life Louisiana, as Auerbach listens in. Finley shares recipes for cooking raccoon (“you gotta cook him good because otherwise he’s tough”). To cook it, or anything else, Finley uses a giant magnifying glass hanging above his grill to see when the meat is done. That way it’s safe to eat – plus, Finley laughs, it’s tender enough for some of his friends who “don’t have no teeth.” This is the first Auerbach has heard about Finley’s contraption barbecue, and he offers up his Nashville studio’s grill for their next session. That would be fine, Finley says, but one gets the suspicion he is just being polite, because he immediately points out that his unit can be towed behind a truck, and “is made out of an old propane tank.”

Finley also loves talking about gospel, from Sam Cooke and the Soul Stirrers doing “Nearer to Thee” (“the best”) to Edwin Hawkins singing “Oh Happy Day.” Finley began singing as a kid in a church choir; By the time he was ten, he’d bought his first guitar and was mixing blues, soul, and R&B. “Music was everywhere in my town, coming from jukeboxes,” he says. He imagined stardom, but other than a gig on a religious program on a local station, fame eluded him. He married, had children, and took up carpentry to pay his bills. For the next few decades, he played at fish fries, nursing homes, and even a prison. Auerbach chimes in that he, too, played nursing homes in his pre-Black Keys days. “You would lose your audience with the dinner bell,” he says, laughing.

Auerbach left those nursing home gigs behind for bigger rooms. Finley, meanwhile, took a break. He got divorced, lost a house and a subsequent trailer to a fire. At 60, he lost his vision, and therefore his carpentry job. Finley calls this series of events “God’s way” of leading him back to music. He began to sing on the street, where Timothy Duffy of Musicmakers – a blues musicians assistance group – noticed him. Duffy helped line up a debut album in 2016, Age Don’t Mean a Thing, on Big Legal Mess Records. Auerbach fell in love with it. “I’ve never heard anything like him before,” Auerbach says. “He’s a pure singer…. He’s been so musical his whole life it’s subconscious.” 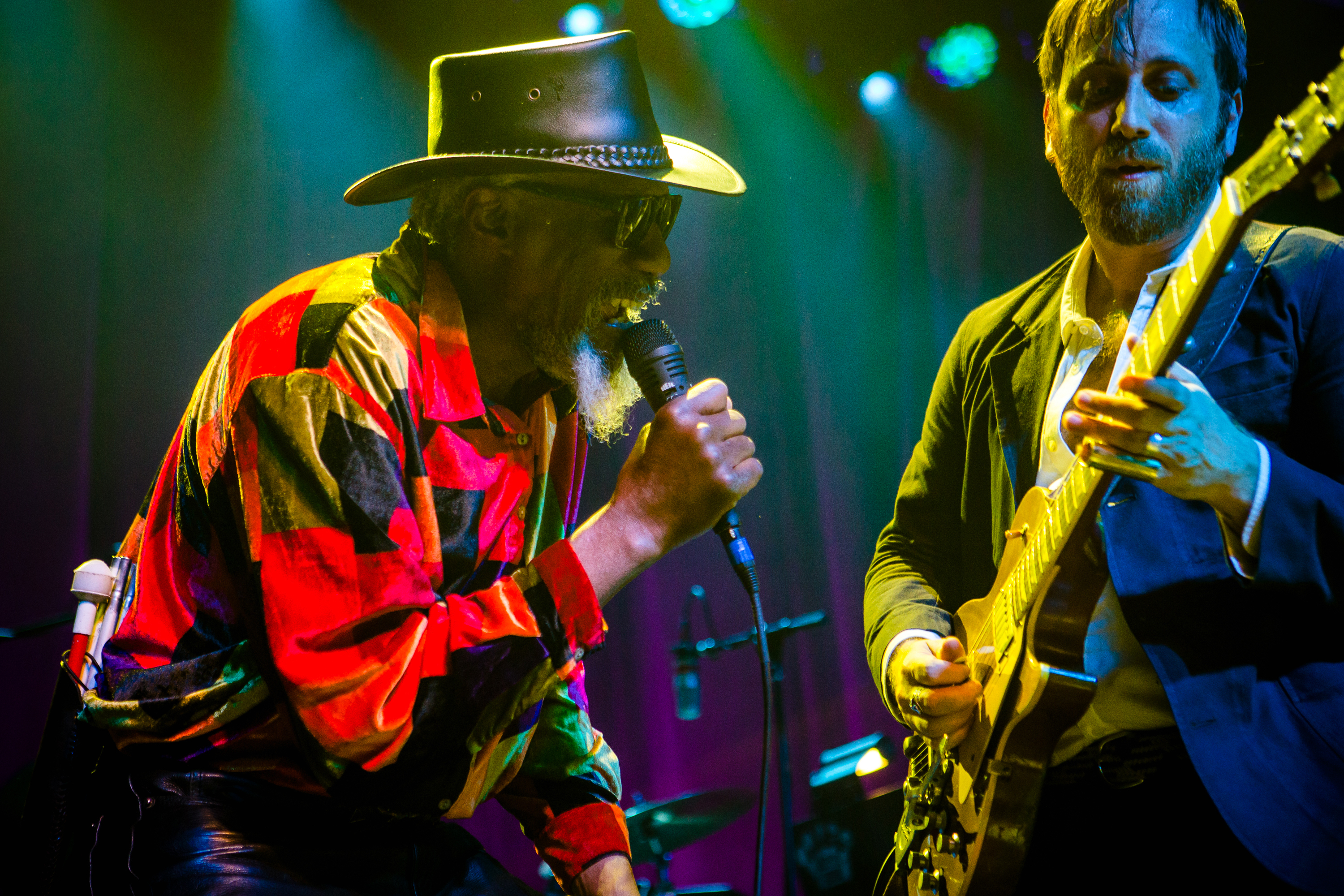 For his debut, he recorded sixty songs in a day and a half – so many that he canceled the rest of the session, and went home to go to church. Goin’ Platinum was a more labored project; Auerbach brought in a fiery set of songs he wrote with John Prine, Nick Lowe, David “Fergie” Ferguson and others. “Holy Wine” sounds straight off a Sam Cooke record, where “Medicine Woman” channels Marvin Gaye’s darkness.

Finley is a church-going man, but admits he likes a drink, particularly at four in the morning on the tour bus. The recipe: honey, lemon and Crown Royal. Finley calls this his “tonic,” and it helps him to return to sleep, but never before he jots down a few musical ideas. As Finley’s night in Seattle winds down, he boards the tour bus to sleep, but within a few hours, he’ll be, like the title of Auerbach’s latest album, up, into his tonic, and waiting for a song. “When I wake up, I’ll play a few chords, or whatever I dreamt about,” Finley says. “And then, I’ll dream some more.”