When the Dixie Chicks made an appearance on Taylor Swift’s “Soon You’ll Get Better,” from her new album Lover, it felt like a debt repaid. And a way overdue one, at that. The country trio have not released an album of their own in 13 years (although they’re working on one), making only sporadic appearances in a wide array of contexts — from their own side projects and a 2016-2017 reunion tour, to their performances with Beyoncé (on Lemonade’s “Daddy Lessons”) and Steve Martin (on one of the comedian’s banjo LPs). Yet their collaboration with Swift, who first learned how to play the guitar with their music, feels especially meaningful; it’s the sign of a legacy coming full circle – a young country singer-turned-pop idol, singing with the band who helped carve out space for young women in Nashville.

The Swift appearance happens to come (almost to the day) on the 20th anniversary of their landmark 1999 album, Fly, which Swift has cited as a major influence. “The Dixie Chicks were making such interesting music and doing it in such an unapologetically feminine, imaginative way,” she told Entertainment Weekly in May. “I was very inspired by the album Fly and the aesthetics, because it was very clear they had really put a lot into the artwork. And so it got my brain thinking bigger in terms of, you know, you make an album, but then you can choose an entire look and color palette and aesthetic and symbolism and imagery and backstories — that you can really make an album even more of an experience if you so choose.”

For Swift, and for countless other artists like her who grew up with the Chicks, the group symbolized an entirely new way of not only prioritizing the narratives of women in their music, but also approaching the young fans who were eager to hear those stories. Knowing Swift’s fondness for Easter eggs, it’s hard to see the collaboration lining up with the anniversary as just a coincidence.

Before the Dixie Chicks were branded as country music’s most infamous outcasts, they were deemed the genre’s saviors. The Texas band’s current line-up — lead singer Natalie Maines and founding members/instrumentalists/sisters Martie Maguire and Emily Robison (née Erwin) — released Fly, their second album, in August of 1999, inspiring Rob Sheffield to proclaim them “country radio’s gift to the world” in his Rolling Stone review. The Chicks had the numbers to back that claim up: Fly debuted at Number One on the Billboard 200 chart and sold over 10 million copies in the U.S., earning diamond status from the RIAA and just barely trailing behind the record-breaking 12 million copies sold by its predecessor, Wide Open Spaces, from the year before.

A country group steeped in traditional bluegrass — Maguire on fiddle and mandolin, Robison on banjo and dobro, and Maines on guitar — was hard enough to find on the Nineties country charts “before you consider the estrogen factor,” as Sheffield observed. But it was more than their existence as an all-women country band, led by a spitfire of a vocalist, that made the Dixie Chicks so appealing – it was their blatant refusal to shy away from it. Wide Open Spaces’ titular song bottled up and captured the feeling of teenage longing and the promise of uncharted independence, the limitless possibilities of adulthood before the realities of womanhood crept through.

On Fly, the trio burst open those realities like a Pandora’s box, allowing the frustrations and compromises to co-exist alongside coveted freedoms and vices, and sometimes melding them all together into righteous, gleeful rage.

What set Fly most apart from the Chicks’ prior work were the original songs; five of the album’s 13 tracks gave songwriting credit to at least one member of the group, as opposed to the lone “You Were Mine” on Wide Open Spaces. The directness of penning their own songs allowed the group to define themselves exactly as they wanted to be seen, messy contradictions and all.

Maguire co-wrote “Cowboy Take Me Away,” the Dixie Chicks’ signature ballad, as a tribute to her sister and her then-newlywed husband, Texan musician and ranch owner Charlie Robison. But then there’s Maguire’s other credit, “Ready to Run” — a Celtic-folky ode to abandoning your own wedding, a counterpoint to all the wine and roses and one of the greatest bait-and-switches to ever open an album. “When the boy gets that look in his eye/I’m gonna be ready this time,” Maines sings coyly to set the scene. “When my mama said I look good in white/I’m gonna be ready this time/Ready, ready, ready, ready, ready to run,” the Chicks rattle off, like they’re already dashing for the hills.

Maines was already a point of contention amongst critics even before Wide Open Spaces hit shelves. Accusations of nepotism flew about the singer; her father Lloyd Maines had played steel guitar with the band for years, and had been the one give them his daughter’s two-track vocal tape. One infamous review in the Dallas Observer dismissed Maines as a “chubby loudmouth,” and comments on her stage presence haven’t aged any better. “[L]ike a cross between a sorority girl and a Megadeth fan…she blurs the line between skank and swank and all but tears the roof off the barn,” reads a Rolling Stone live review from 1998. Before “shut up and sing” became a rallying cry during the Bush controversy in 2003, it was Maines’ high-register voice itself, and her punkish attitude, that drew ire — she was country’s yodeling answer to Poly Styrene, whether they liked it or not.

On Fly, Maines responded by doubling down. “It doesn’t always have to be a two-step and you don’t have to pop it up,” she said of country music in 2002. “It can have an edge.” She channels Lead Belly and Courtney Love on blues-rocker “Hole in My Head,” lamenting the overblown damage that one moderately annoying asshole can bring on in a woman’s life: “You took my imagination and stomped it in the ground.” Her delivery on “Goodbye Earl” — “Ain’t it dark/Wrapped up in that tar/Eeeeaaarlll” – is that of a grinning devil. But it’s the arena showstopper “Cold Day in July” where she truly shines; it would be a great karaoke song if not for the pure, raw desperation that one requires to do it justice. “The moon is full/My arms are empty/All night long, I’ve pleaded and cried,” she sings, and you believe her. 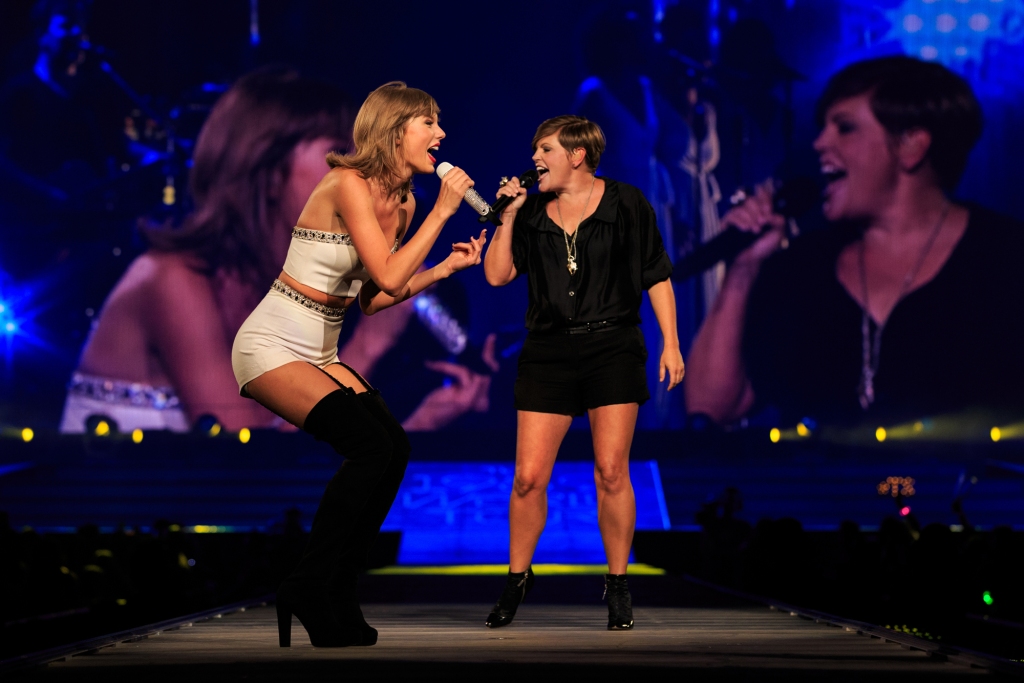 The barnstormer-meets-thrash-metal centerpiece of the album, “Sin Wagon,” sees Maines switching between a rap-like staccato and a guttural belt as she sets off for a post-breakup night of hedonism. “On a mission to make somethin’ happen/Feel like Delilah looking for Samson,” she howls over Robison’s sidewinder banjo and Maguire’s tire-screeching fiddle. This is Lorde’s “Green Light” doing shots with “The Devil Went Down to Georgia,” and it’s these moments of updating the classic outlaw mythologies that are the best on the album. Where the Chicks tend to falter – like on honky-tonk crooner “Hello Mr. Heartache,” the one real dud here — is when their country sensibilities skew towards traditionalism.

To the Dixie Chicks, romance is a temporary burden to shoulder, a pitstop on the way to a more vivid sunset. “Don’t Waste Your Heart” is a tender rejection of a man who Maines knows would only hinder her good times: “It’s funny how the girls get burned/And honey as far as I’m concerned/The tables have turned.” A similar conversation plays out in “Some Days You Gotta Dance” (which was first recorded by Keith Urban), in which a casual chat over tea turns into the dreaded “what are we?” talk. The solution, the Chicks posit, is to shake loose and avoid the question altogether. Even the heartthrob in “Cowboy Take Me Away” feels like an afterthought to the liberating solitude out west; the song gives more lyrical real estate to the scenery than to the cowboy himself, whose “simple smile” is the only real descriptor. “I wanna be the only one, for miles and miles…except for maybe you,” Maines adds — no less passionately, but still, you have to wonder.

Wide Open Spaces producers Blake Chancey and Paul Worley worked again with the band on Fly, which carries just enough pop slickness to modernize the group’s sound. The album’s mix falls somewhere between a smoothed-out pop production and a backwoods hoedown; every instrument works in conversation with one another, often with wryly humorous results. The manifesto of commitment in “If I Fall You’re Going Down With Me” is paired with Maguire’s insistent fiddling and a peppy organ. After Maines wails, “I’m never gonna win,” on “Hole in My Head,” there’s a wobbly exhale from an electric guitar, like a hound dog shaking out its fur after a deep dive into a lake.

Even the album’s heaviest tracks sound springy and sprightly — the only metallic sheen that resembles the Nineties Shania sound is that of Lloyd Maines’ atmospheric steel guitar. The Chicks were team players to a point: Having a live band ensured that the group resembled no one but themselves.

By 1999, the Dixie Chicks had long traded in their cowgirl outfits for velvet jumpsuits and feather boas, positioning themselves closer to the Spice Girls than to Old Crow Medicine Show and broadening their appeal as a result. But it also drew plenty of playful, “bless your heart” sexism from music journalists — “feisty” appeared almost as often as the word “country” in coverage of the band. Praise of the Chicks only seemed to belittle their music, and their presence, as the stuff of Southern bachelorette parties at mall karaoke.

Granted, the trio were happy to poke fun at their “ditzy blonde” personas, posing as angels and other campy get-ups in Fly’s liner art. If anything, the album proved that their girlishness could carry a mean streak. “Goodbye Earl” wasn’t even supposed to be their song — it was penned by “Burning Love” songwriter Dennis Linde and originally performed by Sons of the Desert (Google them) — but it’s impossible to imagine it now without the schoolyard-cheerleader bravado they imbued it with. The song would be the last time the Chicks were really allowed to stir the pot in such a carefree manner; 2002’s “Long Time Gone,” targeting the soullessness of country radio, is the only later single that comes close, and the tracks on 2006’s Taking the Long Way are weighed heavy by the fallout from Maines’ Bush remarks.

It’s sometimes difficult to process Fly’s more vulnerable aspects while knowing what’s to come for the band: the early weariness of showbiz in “Heartbreak Town,” the literal nakedness of the “Without You” video that foreshadows a stark magazine cover. It’s remarkable not only in what would unfold for them later, but in how baffling it was that they were getting away with something so radical from the get-go – an all-women country-bluegrass band with street-corner origins that became one of the genre’s biggest crossover successes. There would be no Sara, no Carrie, no Miranda, no Maren, and especially no Taylor without the Dixie Chicks proving that young women wanted outlaw stories of their own, and were waiting in the wings for their chance to take the stage.

On the intimate closing track “Let Him Fly,” Maines bemoans that “things can move at such a pace/the second hand just waved goodbye,” all while singing over Robison’s meandering dobro. Later, the three of them harmonize, their voices rising up into the clouds: “There’s no mercy in a live wire/No rest at all in freedom.” There’s a sense that even at the top of the world, the Chicks understood how precarious it all was. But for a brief moment, they could give themselves permission to linger and enjoy the view.