The Black Keys knew expectations were high for their Let’s Rock tour, their first in years. So how did the band choose what songs to play? “We just went to the top 25 songs on Spotify,” jokes singer-guitarist Dan Auerbach.

“We thought about ones that were fun to play live, and also picked some ones we haven’t played in a while. We kind of threw it together, and it really worked out pretty damn good.”

That was true at the band’s recent show at Brooklyn’s Barclays Center, where the Keys lost themselves in their nine-album catalog, retooling songs like “Everlasting Light” and “Howlin’ For You” with a new band: guitarists Steve Marion and Andy Gabbard, plus bassist Zach Gabbard. “We can open some of these songs up,” Auerbach says. Here, the Keys break down a recent set in Denver.

1. I Got Mine 2008
The Black Keys started their show at Denver’s Pepsi Center with this stomper from Attack and Release, which they like for its combination of slow tempo and heavy riffs. “It’s kind of like when Kool-Aid Man breaks through the wall,” Dan Auerbach says.

2. Eagle Birds 2019
Auerbach likes this hypnotic Delta-blues-style rocker because he gets to play a Peavey Razer — the guitar of choice for the late Mississippi guitarist T-Model Ford. “I probably saw T-Model [live] more than anybody,” he says. “He’s probably our biggest influence. Junior Kimbrough was like jazz, but T-Model was like a garage band. We could do that.”

3. Gold on the Ceiling 2011
“I wanted to make sure we pepper the set list with new stuff, and not play a block of, like, six new songs in the middle,” says drummer Patrick Carney. After two new songs, he says, “we hit ‘em with the hit.” Here, a curtain drops, revealing a 55-foot lighting rig. “I just try not to play too fast, because Dan and I get excited.”

4. Everlasting Light 2010
The bandmates have retooled this soulful rocker with a tremolo-steeped psychedelic arrangement they can get lost in. “It gives me time to look out,” says Carney. “It’s like our slow-dance moment, because there’s always people embracing each other during that song. It’s touching.” Says Auerbach, “The groove feels so good. I can still hit those high notes, which is so weird. Someday I won’t be able to.”

5. Howlin’ for You 2010
Auerbach used to simplify this Brothers song, before they hired the backing musicians in their current setup. He rakes the guitar strings with his fingernails like he did on the record, while the other guitarists play lead. “Those little details on the record make it for me,” he says.

6. 10 A.M. Automatic 2004
“That’s straight-up garage rock,” says Auerbach of this thrasher, recorded in a tire factory. The crowd gets rowdy: Carney always looks for a character he calls “Mr. Party Animal.” “It’s always some guy with an eccentric piece of clothing, a hat, and is dressed like an asshole just dancing his ass off,” Carney says. “It’s the equivalent of going to a football game and sitting next to a guy who has fully painted his face.” 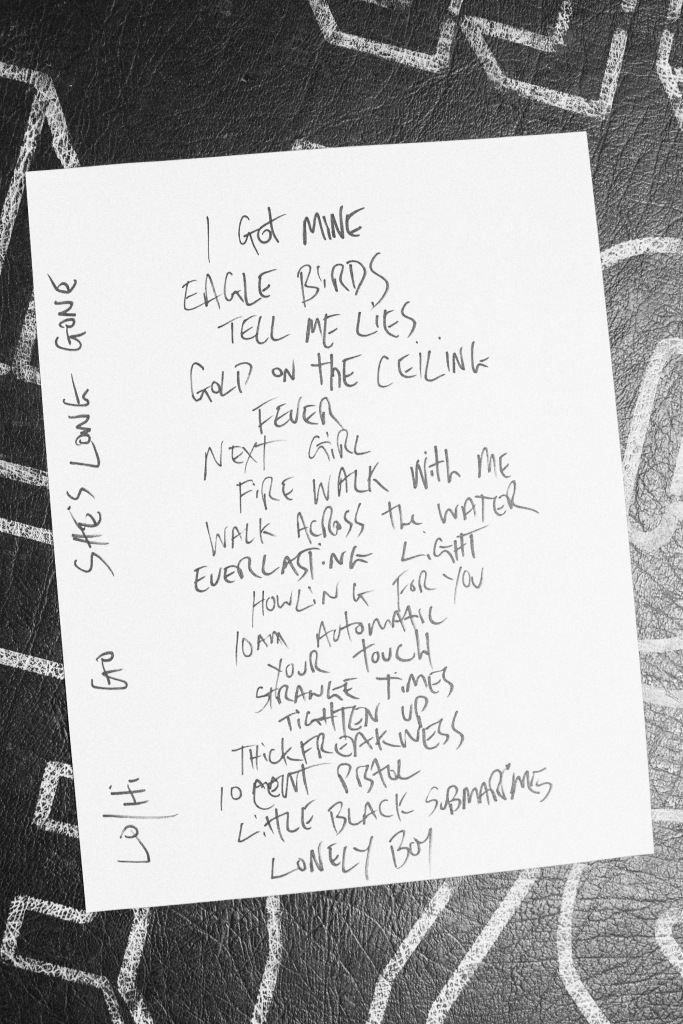 The band’s Denver setlist (songs continue along left side of page.) Photo by Alysse Gafkjen

7. Thickfreakness 2003
“It’s currently the oldest song in the set list,” Carney says. “I remember opening our first-ever show in London, in front of about 20 people at the Camden Barfly in April 2003. And I was so nervous in front of 20 people. That feeling of being basically a kid and getting flown overseas to play rock & roll and feeling like you gotta put on a show. That song still reminds me of that every time we play it.”

8. Little Black Submarines 2011
On this El Camino epic, Auerbach plays an acoustic guitar before strapping on an electric for a psych-rock explosion. “I can take my earplugs out while Dan’s doing the acoustic part,” Carney says. “We have this nine-year-old superfan who attends a lot of Black Keys stuff. The other night, he was there with his parents, just losing his mind.”

9. Lonely Boy 2011
At a recent Las Vegas fest, the band brought out Wayne Newton to dance to this single. “We anticipated Lil Wayne [who also played the fest] was going to be late, because of previous experiences,” says Carney. “So I said, ‘We need to have an extra Wayne.’ ” Says Auerbach, “He’s built like a fucking tank. He could have whipped all of us. His handshake was crushing.”

10. Lo/Hi 2019
This new encore — with a T. Rex-style groove and backup vocals — is brought to life with visuals of an electric chair on the band’s huge screen. It’s a reference to the Keys’ new album, “Let’s Rock” — named after a convicted killer’s reported last words before he was executed. “It’s all about the groove and being able to lock in to all those guitars,” Auerbach says. “It’s just fun.”