The gravestone of the much-maligned record-industry practice of “windowing” has a date etched on it: April 13th, 2018. That was the day country superstar Jason Aldean released his latest album, Rearview Town, which, in streaming terms, appeared exclusively on premium/paid-for tiers (including Spotify’s) during its first two weeks on sale.

This was a risky gamble for Aldean and his industry team, including record label BMG/Broken Bow and management house Maverick: the only record known to have previously been windowed on Spotify in this way was live album Paris by Rammstein, issued in May 2017, which, despite its pioneering industry status, came and went without much fanfare. Aldean’s Rearview Town did just fine — debuting at the top of the U.S. charts, and going on to sell more than a million album equivalents in the States. But it was the last of a fleeting breed.

This was a curious denouement to the story, considering how hard the music business worked to secure the right to window its records on Spotify in the first place. In April 2017, trumpeting its new global deal with Spotify — seemingly camouflaging the fact it had accepted a lower-margin licensing agreement than in prior years — Universal Music Group announced that it had won the right to exclusively release new albums for a limited period on Spotify’s pay-only tier. Daniel Ek, founder and CEO of Spotify, explained: “We know that not every album by every artist should be released the same way, and we’ve worked hard with UMG to develop a new, flexible release policy. Starting today, Universal artists can choose to release new albums on premium only for two weeks, offering subscribers an earlier chance to explore the complete creative work, while the singles are available across Spotify for all our listeners to enjoy.”

'Hey Siri, Play Songs to Calm Me Down': What the World Is Listening to Amid COVID-19

20 Best Dramatic Duets of All Time

The practice never took off. Taylor Swift, a one-time public hater of Spotify’s freemium model, underscored just how snuffed out the concept of windowing had become last month with the release of her seventh studio album, Lover. Swift, who previously blocked her albums from availability on Spotify entirely — and chastised the company’s ad-supported tier via the words “it’s my opinion that music should not be free” — unleashed the whole of Lover, from minute one, on Spotify, both for free users and paid users.

Yet over in China, just as the U.S. turns its back on the concept, windowing is becoming big industry news. Tencent Music Entertainment — via subsidiaries QQ Music, Kuwo, and Kugou — is throwing its arms around a strategy to drive up revenues from streaming music by putting certain premium releases behind a paywall. And, according to its top brass, it’s starting to work.

TME began experimenting with a paywall strategy in Q1 this year, making a very select amount of premium music non-free on its platform, and announcing “encouraging results”. Now, the firm says windowing is proving to be a potent weapon in improving its income from music — and could eventually even help fix the piracy-riddled Chinese audio market as a whole.

Last month, TME, which owns an estimated 84 percent marketshare of audio streaming in China, announced its second quarter results. It turned over 5.90 billion RMB ($859m) in the three months to end of June; 74 percent of this figure came from its core business of “Social Entertainment Services” (including online karaoke/social platforms), with a further 1.56 billion RMB ($228m) derived from its online music services. These results didn’t please Wall Street (TME is traded on the New York Stock Exchange), “spooking” investors, as the firm’s share price slid eight percent following its quarterly earnings call.

What those “spooked” may have missed: TME’s paywall strategy helped drive its music streaming subscriber audience to new heights, hitting 31 million and growing by 2.6 million in just three months — its highest quarter-on-quarter increase for more than a year (see below). This, in China, represents remarkable progress for a nation not accustomed to paying for music: according to the IFPI, the average citizen in the country shelled out the equivalent of just $0.37 all year on recorded music in 2018.

Tony Yip, TME’s Chief Strategy Officer, told investors: “The amount of content being put behind [our] pay-for-streaming paywall at the moment is still a very small percentage of our total [but] this is just the beginning, and we will continue to do more.” 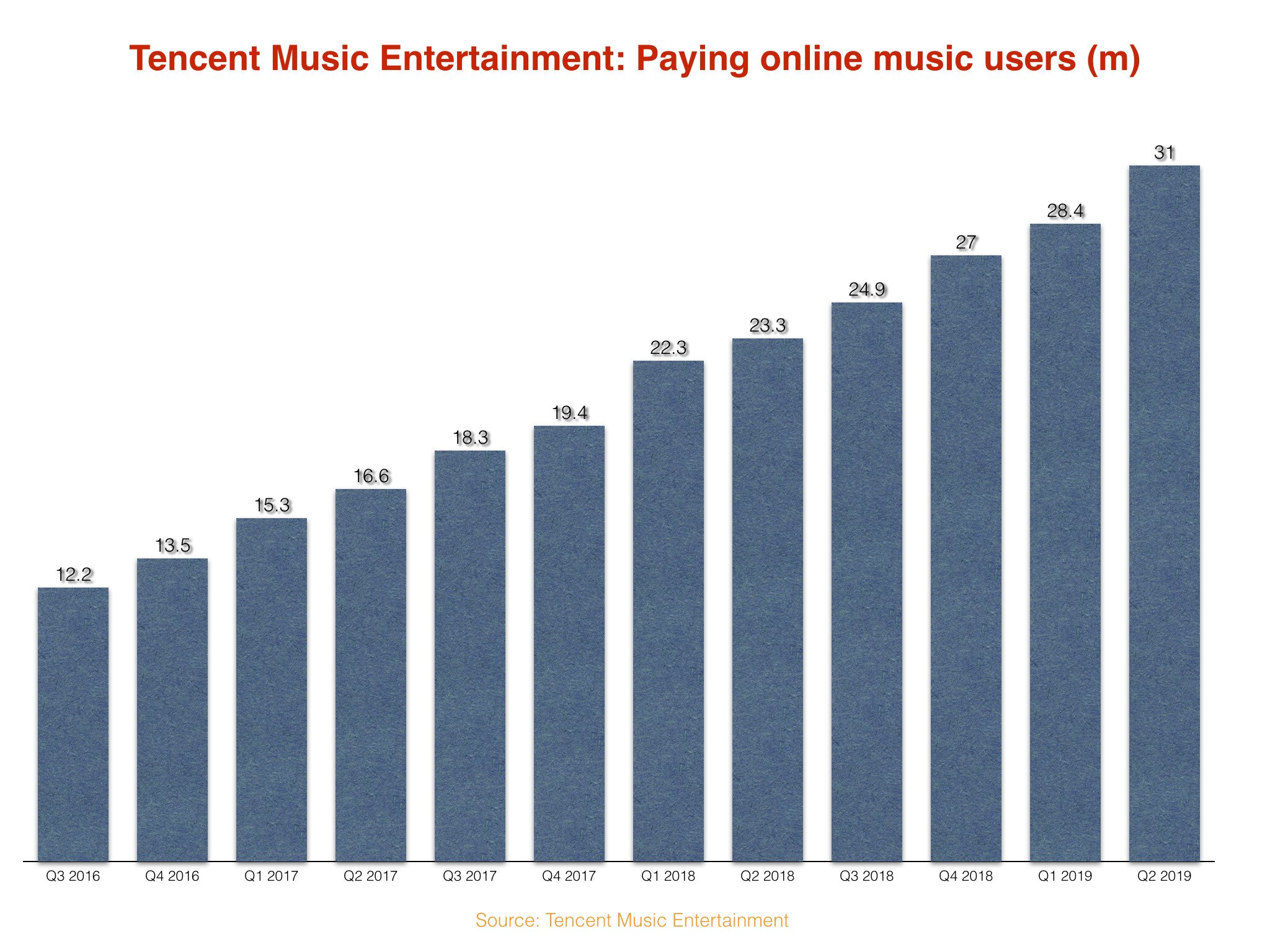 Cussion Pang, CEO of TME, further explained: “[We] have started to attract more first-time paying users, illustrating … a positive reception to the new [paywall] model. As we continue to enrich our content offering behind the paywall, in the future we will roll out membership privileges and differentiated services to paying users, improving user experience and bringing our service to a new level.”

TME’s music subscription revenue grew by 32 percent year-on-year in Q2, hitting 798 million RMB ($116m). That’s a long, long way from Spotify’s equivalent subscription revenue in the period ($1.7 billion), but up by a higher percentage margin (Spotify was up +31 percent). It’s worth noting that Spotify owns approximately nine percent of TME, while the latter’s majority-parent — Tencent Holdings — owns the same-size stake in Spotify.

Added Pang of TME’s paywall: “Our status as the largest online music services platform in China comes with a duty to uphold copyright protection and unlock the intrinsic value that our content has to hundreds of millions of music lovers. This will take time, but we are committed to this journey of educating users. … We firmly believe that our pursuit of this endeavor will open tremendous opportunities for us to grow paying users.”

The power of TME’s strategy was recently highlighted by Taiwanese singer-songwriter Jay Chou, whose “premium” music the company began putting behind its paywall at the start of this year. Flying in the face of a widespread U.S. music industry belief that pay-only releases harm an artist’s popularity, Chou’s latest single, “Won’t Cry,” caused QQ Music to crash under the strain of those trying to pay to access the song on September 16th. In terms of paid-for downloads, it was purchased 2.4 million times in its first hour on the site. (TME’s desire to “force” users to pay for access to the song was no doubt helped by the fact that YouTube, ultimately the world’s biggest free music streaming service, is blocked in China.)

Over a recent dinner, one very senior U.S.-based major record company executive told me of their admiration for TME’s strategy of “attaining growth by [inventing] new revenue streams,” both across its digital music service and its Social Entertainment Services division. (For example, within the company’s social karaoke app WeSing, fans have gone wild for a new feature, “Grab the Mic,” which gives “winning” participants the chance to sing alongside local celebrities.) This was in stark contrast, he noted, to Spotify, whose profitability strategy, he said, was “centered on inventing ways to grab margin from its biggest customers.”

An example of what he was talking about: Perhaps the most alarming stat to emerge from the music biz in recent weeks is the fact that, according to Nielsen, the average time U.S. music fans say they spend listening to music each week has dropped from 32.1 hours in 2017 to 26.9 hours in 2019 — a decline, you would assume, that has been materially affected by Spotify’s energized push of podcasts on its service. (Currently, and these economics may not remain fixed, every time someone plays a podcast rather than a song on Spotify, the record industry loses out on revenue, and Spotify improves its margin.)

As this tussle heightens, and especially if Spotify’s Average Revenue Per User continues to drop, major record companies, inspired by TME’s successful experimentation in China, may once again look at the economic prospects of “windowing” their biggest releases — harming the appeal of Spotify’s free tier, while sending a clear signal to fans that, as Taylor Swift once memorably argued, “music is art, and art should be paid for.”

Tim Ingham is the founder and publisher of Music Business Worldwide, which has serviced the global industry with news, analysis, and jobs since 2015. He writes a weekly column for Rolling Stone.