With his biting, confessional lyrics, technique-heavy flow that can hit Busta Rhymes-like levels of emotional intensity, extensive production and songwriting credits, and indomitable work ethic, Suga is an indispensable piece of BTS’ collective artistic soul. In April, he sat in his label’s headquarters, wearing a gray knit cap, white mask, and black parka as he spoke about his battles with depression, his songwriting process, staying hungry after conquering the world, and much more.

(In celebration of BTS’ appearance on the cover of Rolling Stone, we’re publishing individual digital covers with each member of the band; check back tomorrow for our interview with V.)

You had surgery late last year for a shoulder injury that I believe dates back to your trainee days. How are you feeling?
Much better. There’s still some physical therapy that I have to do, but it’s much better. And, yes, I suffered the injury in an accident when I was 20 years old and then as I continued to deteriorate, it was recommended to me that I undergo surgery. Fortunately, there was a little bit of time that I could use to have this procedure. So that’s what we did.

It’s very impressive that you’ve been doing elaborate choreography for all these years with this injury. How did you manage that?
By the year before I got the surgery, I think, I was receiving treatment, injections, almost on a monthly basis. But there were times when I couldn’t lift my arms or have a full range of motion in the middle of a concert. So it wasn’t really so much about the pain. It’s more about whether I would be able to continue doing these performances. When you are actually performing, because of the adrenaline and whatever, it doesn’t really hurt. You sort of experience that the next day, that’s when you feel the pain or the discomfort or you can’t raise your arms anymore.

I love the song “First Love,” where you talk about your early infatuation with your piano and with music. The lyrics suggest that your love for music is also a source of torment; what was going on there?
When I was working on “First Love,” I wanted to express a mix of different emotions, because first love is not all good things; there’s the bitter things as well. So I was talking to Mr. Bang about attaching the metaphor of first love to the first moment I came to know music. The target of the love is a piano, but it could be anything – a friend, some other entity. Then, I wanted to show the emotions you go through.

You’ve been open in your lyrics about depression and other struggles. How are you now?
I’m comfortable now and feeling good, but those sorts of negative emotions come and go. So it’s almost like cold weather. It may come back in a cycle over a year, year and a half. But when I hear people say that when they listen to my music, and feel comfort and are consoled by those lyrics that express these emotions, that makes me feel very good. It’s very encouraging. I think, for anybody, these emotions are not something that need to be hidden. They need to be discussed and expressed. Whatever emotions that I may be feeling, I’m always ready to express them now, as I was before.

You’ve written many songs for BTS, many songs for yourself, and many songs for other people. What is your usual songwriting process?
The process is really different for every song. Sometimes it may be a word that pops up and I build on that word, or someone could make a request for a certain way they would like a song to be developed. Oftentimes, we decide on a theme and then we sort of freely work from the larger overarching theme that we may have. But generally, when I work on a song, I create the beat first and then the melody and the rap and then finally the lyrics. That’s generally how I build them.

How is your guitar playing going?
Since my shoulder got much better, I am back on the guitar. I’ve been playing other people’s songs to practice, of course, and I’m looking forward to sometime in the far future of being able to sing and play the guitar at the same time. That’s what I’m working toward.

On “Dope,” you have a great line about your youth rotting in the studio. But do you ever have regrets about that?
I have no regrets about the work in the studio. Those days and that time has allowed me to have the kind of opportunities that I have now and today. So there’s no regret. But I do sometimes think, “Why did I have to spend so much time in the studio?” [laughs] Why couldn’t I have gone faster. I had that head-to-the-grindstone effort. Why couldn’t I have rested a little more or refreshed myself a little bit more? I do think about that. 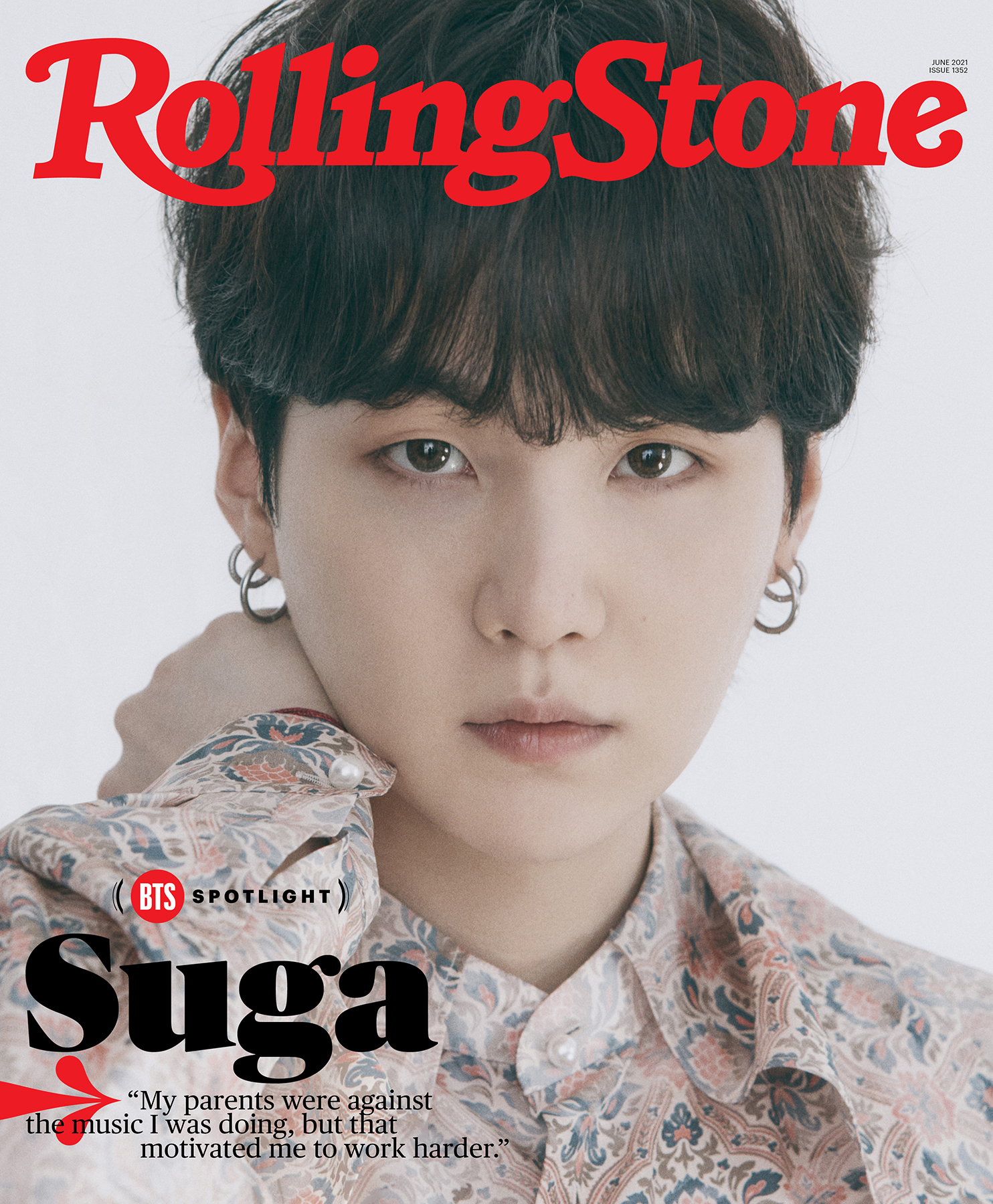 You and RM and J-Hope have all these great double and triple entendres and other wordplay that can be lost on listeners who don’t speak Korean — translations can’t convey all of it. Is it frustrating that some of your foreign fans might miss certain things?
When I was growing up, of course, I listened to American hip-hop and pop, and my English is not very good. So I read the lyrics and the translations of the lyrics. And obviously, what native speakers of English may consider the key lines, the key verses, the punchlines, I really couldn’t understand them because of the intricacies of the language. And, I think, that’s an unavoidable part of the language barrier. And, I think, it’s important to try to find a happy medium where people from both languages and cultures or other languages understand it. So we try to write lyrics sort of in the happy middle, that can be understood by people speaking other languages. And also, I’m studying English more and more, trying to get more familiar with it. So if we can get both Korean speakers and English speakers to understand the lyrics, that would be great. But again, that’s something I experience as well.

There’s a story that your parents didn’t like that you were rapping, that they even tore up your lyrics. How did that affect you?
My parents didn’t understand rap. They are a generation apart from myself, and they never listened to rap; it wasn’t part of the music that they listened to. So it’s only natural they were against what I was doing. And, of course, being a musician is a very unstable profession as well. So I can understand perfectly why my parents were against what I was doing. But I think that motivated me or helped me work harder because there was something that I now had to prove. I had to show my parents it was possible. So it drove and motivated me to work even harder.

After all that BTS has achieved, how do you stay hungry?
I’m one of those people who think that not only do people change, but people must change. But I do think it’s so important to maintain that hunger. But from the days when we were actually hungry, we set routines for ourselves, and they stay with you, even if you change as a person. I think we are still able to draw upon the things that we talked about when we were still hungry, so we can maintain that work ethic and stay hungry, even if we change and develop as people. Now, instead of hungry, I think we’re more hangry! Angry and hungry [laughs].