Spotify has worked hard to improve its reputation amongst artists. The company has forged close ties with everyone from Shawn Mendes to Camila Cabello and Justin Timberlake in recent years – not long after it was being publicly harangued by the likes of Thom Yorke for both its business model, and its meager per-stream payments to artists.

This transformation in artist relations should be chalked up as a hard-fought PR triumph for Spotify – and it’s a triumph which also benefits rival music services. Yet fresh economic developments suggest that musicians may soon have new reasons to shake their fist in streaming’s direction.

Two sets of important stats have just been issued by music business bodies in the UK and the US, from the British Phonographic Institute (BPI) and the Recorded Music Association of America (RIAA) respectively. This data has grabbed positive headlines, most notably for the RIAA’s revelation that overall revenues in the US recorded music industry grew 12% to $9.8 billion last year, driven by Spotify, Apple Music, Amazon Music, Pandora, TIDAL and other streaming platforms. But dig deeper, and serious questions for artists start to emerge.

More People in the U.S. Bought Music Subscriptions Than Ever In 2020

When it comes to the topic of cash generated by the recorded music business, the biggest talking point is as old as the Gramophone itself: Where is all of this money going? The RIAA and BPI reports, compiled by two bodies funded by record companies, unsurprisingly shed little light on how much moolah the major labels are retaining vs. what they pay out to artists. (As a rough guide, recent Warner Music Group announcements related to Spotify equity suggest that the average digital streaming royalty rate amongst that company’s artists is around 25%.)

However, when we lift up the hood on the RIAA and BPI reports, they do tell us how much of the money paid by consumers to Spotify, Apple Music et al. is being kept by these streaming platforms, rather than landing in the hands of labels and artists. And here’s the big news: That number has significantly climbed in recent years.

The RIAA numbers reveal a “retail” and “wholesale” figure for the US market. This essentially tells us how much money is being spent by consumers on recorded music (retail) and how much is then paid out to record companies and artists (wholesale). In the case of the RIAA, this retail/wholesale differentiation is only given across all formats (i.e. streaming plus CD, vinyl and download).

In other words, in 2018, artists and record labels were paid 1.1% less of the total money handed over by US consumers to music “retailers” – a sector now dominated by streaming services – than in 2016. That percentage stat might not sound hugely noteworthy, but think on this: 1.1% of the total music retail revenues in the US last year ($9.8 billion) equates to $108 million.

One of the biggest factors in this development? Spotify’s new deals with major and independent labels, struck in the first half of 2017, in which the record companies agreed to lower the share of pro-rated net revenue they received from the platform, down from approximately 55% to 52%. The thinking there: Spotify needed “margin relief” from the labels in order to become an economically sound company. (Remember this, because it becomes significant later in this story.)

What about streaming services specifically? Is there a way we can omit download and physical retail figures to purely ascertain how much the likes of Spotify are keeping from labels and artists? Yes, thanks to the U.K. figures from the BPI, in addition to retail figures from that market provided by the Entertainment Retailers Association (ERA).

As you can see in the chart below, in 2018, according to ERA, subscription music streaming services in the U.K. were paid £829.1 million from consumers that year. The BPI provides a wholesale figure for U.K. subscription music services (again, revealing the artist/label share of this money) in the same timeframe of £467.6m.

This means that just 56.4% of the total money taken by subscription streaming services in the region ended up in the pockets of record labels and artists. That’s down slightly on the same figure from the year before (57.6%), and down 2.5% on the equivalent figure from 2016 (58.9%). Those new Spotify deals, it appears, have had a pretty profound effect.

According to the new industry-standard annual report from trade body body IFPI, the U.K. was the third biggest recorded music market in 2018, behind the USA and Japan. It is, therefore, a useful bellwether for the global Anglo/American music business. So let’s go with the logic that a similar retail/wholesale streaming trend to the U.K. would have likely been seen in the U.S. last year: The U.S. recorded music industry saw total subscription streaming “retail” revenues hit $5.4 billion in 2018, according to the RIAA – more than half of the market’s revenue across all formats. Two-and-a-half percent of $5.4 billion is $135 million. 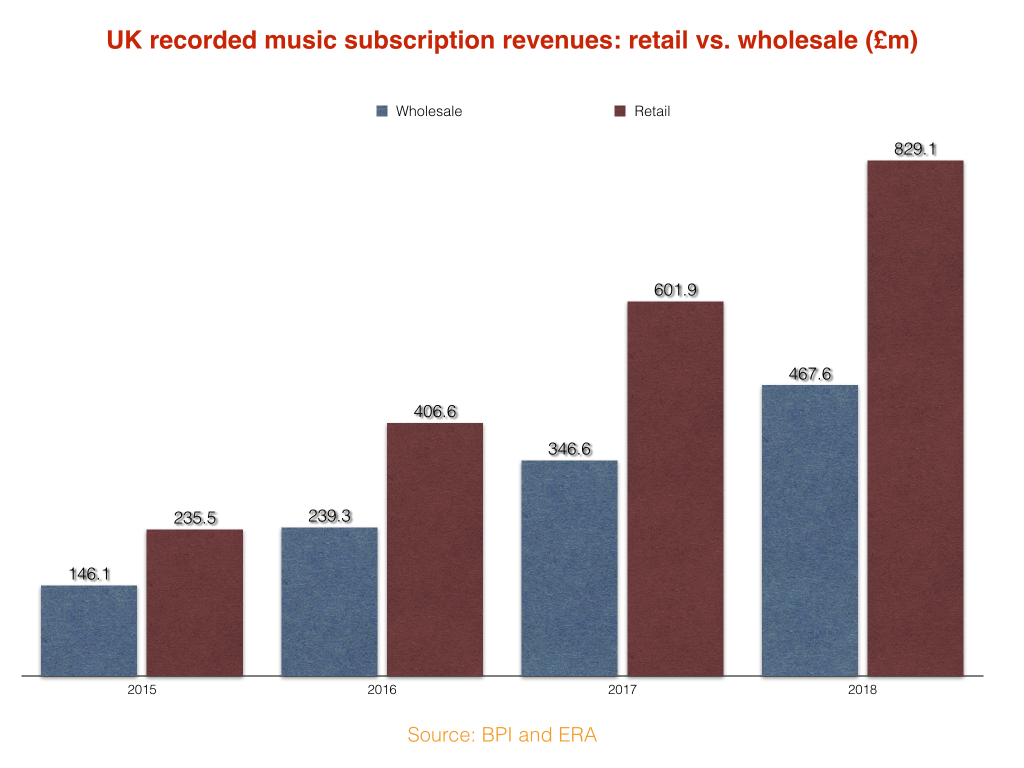 That’s a significant chunk of change and, remember, is only an estimate for a single market. The “margin relief” offered by record companies to Spotify (and others) in 2017 will have surely resulted in a material nine-figure saving for these platforms last year around the world.

This all becomes even more interesting when we consider a new, ferocious PR problem that hit Spotify last month, when the company was discovered to be one of four organizations (alongside Amazon, Pandora and Google) that had legally objected to agreed royalty rate rises for songwriters in the United States. This attracted a whirlwind of bad publicity for Spotify, with leading songwriters and lawyers accusing the platform of “shameful” behavior, and of “a direct attack on the people who make your platform possible.” In response, Spotify published a blog on the topic filled with coded language, including this key line: “Music services, artists, songwriters and all other rightsholders share the same revenue stream, and it’s natural for everyone to want a bigger piece of that pie. But that cannot come at the expense of continuing to grow the industry via streaming.”

What Spotify really meant by that: Our business model is being broken by the amount of money we’re paying to record labels and artists, so increasing the additional amount we pay to songwriters (and their music publishers) is a bridge too far. It would be fairer, from our perspective, to “re-balance” one side to the other; i.e. paying artists and labels an even smaller percentage of our money, which could then subsidize increased cash for songwriters/publishers.

As the stats here show, that will be a big ask for some elements of the music industry – not least the record companies. The manager of one of the world’s biggest electronic music superstars recently said to me on the topic of “Spotify vs. songwriters”: “Spotify has made a major PR mistake being caught with its hands in the till. But this industry too often forgets that Spotify is also the company that saved the whole music business in the first place.”

He had a point: According to the latest IFPI stats, the global recorded music market has just grown for the fourth year in a row, putting the post-Napster/piracy years firmly in the rearview mirror. This recovery has, and continues to be, driven by streaming services, amongst whom Spotify remains market leader. Streaming services might be keeping a higher percentage of music industry money from artists than ever before – but they’re making artists much more cash, too.

Thanks to the technology of streaming, and huge investment from the likes of Spotify and Apple Music, the recorded music business is once again printing money. Who gets to keep that money at the end of the day, though, is as big a bone of contention as it’s always been.