It’s a spring afternoon in Crown Heights, Brooklyn, and Donnelly is at her Airbnb waiting for sushi to be delivered. Sporting straight-across bangs and a magenta jumpsuit, she sits cross-legged on the couch and thinks about the night before, when she sang to a packed house at Rough Trade Records. She was surprised to find that the crowd knew the words to her songs. “It was quite a shock, really,” she says. “You come so far from Australia and you have zero expectations. You’re kind of ready for a fight, in a way. You’re ready to do your best you can ever do, and there’s no easy way out of it.”

Donnelly first gained attention in 2017 with “Boys Will Be Boys,” a devastating retelling of a friend’s rape experience. The song was hailed a #MeToo masterpiece, which Donnelly hadn’t expected. “I guess by the time it reached the U.S. audiences, there was just so much more conversation going on,” she says. “People were ready to listen, because they’d been forced into confronting these issues.” 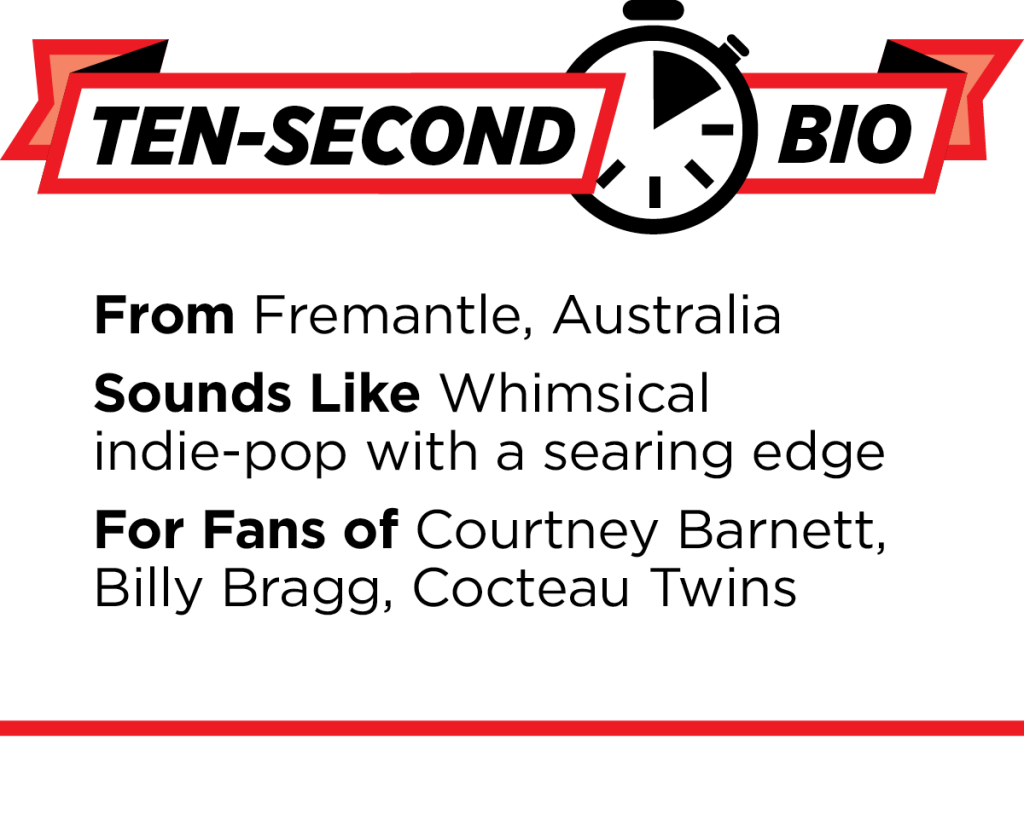 “Boys Will Be Boys” appears again on Donnelly’s first full-length album, Beware of the Dogs. Released earlier this spring, it’s an indie-pop gem that further explores the injustices women face; prejudice toward people of color; and lame dudes who like Ernest Hemingway. In “Old Man,” the first track, she triumphantly stands her ground: “Oh, are you scared of me, old man?/Or are you scared of what I’ll do?/You grabbed me with an open hand/The world is grabbin’ back at you.”

Many of the songs on Beware of the Dogs are about Donnelly’s life back home in Fremantle, Australia. “Lunch” is an ode to the sadness she feels before leaving her family and friends on tour, while “U Owe Me” is about a terrible boss she had while working at a local pub. Then there’s “Beware of the Dogs,” a fervent take on the Australian government’s institutional racism. Donnelly describes her frustration while admitting that she herself is white and privileged. “It was my way of painting a picture,” she says. “How I can live next door to someone but have a completely different experience based on the color of my skin — how lucky that makes me, but how fucked that is.”

Donnelly spent her childhood in Wales, where her father moonlighted as a stand-up comedian. He wrote humorously self-deprecating songs, which rubbed off on Donnelly. “He can’t tell me off, ’cause it’s his fault I’m doing this,” she says, smiling. She began busking at the age of 15, singing mostly syrupy pop songs like “Kiss Me” by Sixpence None the Richer and “Everywhere” by Michelle Branch.

After a one-year stint at the West Australian Performing Arts Academy, Donnelly dropped out to join a cover band. “That probably trained my voice in a way I didn’t know how, but it also helped me work out what I didn’t want,” she says. “I had a lot of hectic experiences in that band, being objectified as a woman. Playing for pharmaceutical company reps’ Christmas parties, where someone will get up and grope me onstage and that be okay. That kind of thing.” She quit after three years and began working at the pub and playing in friends’ bands. “There’s so many ghosts in that pub,” she says, referencing reports that that a serial killer once frequented the place. “You could smell it in the carpet.”

After her acoustic guitar was stolen out of her car, Donnelly made the switch to electric, and quickly realized she could still finger-pick and remain a songwriter. When I mention that she’s often compared to Courtney Barnett, she lights up. “She’s the reason that so many female Australian artists can sing about what they sing about,” Donnelly says excitedly. “The first song I ever heard of hers, the first lyric, was ‘I masturbated to the songs you wrote.’ I fucking almost crashed my car.” Then Donnelly sighs and collects herself. “I got told that I sound like Chumbawamba by a Dutch journalist. So Courtney Barnett is pretty fucking good in comparison.”

There are times Donnelly wishes she wasn’t so candid in her songwriting, but it’s the emotional depths in her songs that have attracted many of her listeners. In “Watching Telly,” she reflects on the time she had an abortion; she cried while recording “Allergies,” about a failed relationship. “I didn’t have the luxury or time to recover from it,” she says of “Allergies.” “The demo kept that initial feeling. We took out a few sniffs, but you can hear my voice wobbling.” Still, Donnelly makes light of her often-heavy subject matter: “I don’t just thrive off heartbreak or misery. I enjoy life, too.”

When I ask Donnelly what new records she’s been listening to, she pulls out her cellphone and calls out artists from her Spotify: Better Oblivion Community Center, Mitski, Aldous Harding and Julia Jacklin, a fellow Australian singer-songwriter who co-directed Donnelly’s charming video for “Tricks.” A standout track on the album, the video features Donnelly doing everyday activities (watering plants, eating food, walking) while a man unsuccessfully tries to get her attention. “We want people to wonder whether he was actually part of my imagination or whether it was real,” she says. “We had the best time.”

If the themes that Donnelly confronts on Beware of the Dogs aren’t affecting her by the time she writes another record, she says, she won’t rehash them. “There are so many other things that don’t affect me, but affect others, that should be performed about,” she says. She also notes that inspiration doesn’t always have to come from within. “I was talking to Julia Jacklin about this. Sometimes with female artists, [people assume] every song is like a diary entry. But as for guys, they can get away with saying things and then being like, ‘What a great storyteller!'”

After wrapping up touring in November, Donnelly will return to Fremantle, where she’s lived since she was 22. “It’s the perfect sanctuary to reflect and be away from it all,” she says. “I can walk down to my local shop in my underwear and no one gives a shit. It’s nice.”