Although it may not be obvious from her intricate art-rock albums, Annie Clark, a.k.a. St. Vincent, is a huge Metallica fan. In fact, they inspired her to pick up a guitar in the first place. Clark was a 10-year-old violin player in Dallas when she first heard Metallica, and she immediately tried to play their heavy melodies on her instrument.

“I was like, ‘The violin fucking stinks,’” she says. Clark switched instruments and even played bass in a Metallica cover band as a teen. So she was psyched to sit down with the band’s lead guitarist, Kirk Hammett, who, it turns out, is a huge fan of Clark’s. When they meet up at Hammett’s favorite Sonoma, California, restaurant the afternoon following Metallica’s massive S&M2 orchestral show, he is full of questions for Clark about St. Vincent’s 2017 album, Masseduction, which he’s been playing since it came out.

“I sit in my hotel room and listen to it and just think about the emotional depth of it all, the layering, the production, the guitar sounds, the cool dynamics,” he tells her. “We’re all just a bunch of cavemen, really, trying to find fucking cavemen riffs. But there’s a sophistication in your guitar playing that I just love.”

CLARK I got to watch you guys last night, which was so fucking awesome. I was thinking about the elemental puzzle that Metallica is. It just seems to me like you get to be the water or air element within the band. It’s like, there’s this awesome rigidity, and you get to come in with this energy of fluidity that’s so beautiful. It’s tough, menacing, awesome. But you get to be this soprano.

HAMMETT Thank you. I try to bring an element of improvisation to the band so we don’t sound the same every single fucking night. I don’t like rigidity. I came from a generation of musicians whose mantra was never to play the song the same way. I only play certain guitar solos like the album, because I know that’s what the audience wants. But then there are solos where I don’t know what the fuck I’m going to play. I love putting myself into a scary situation.

CLARK You can feel it. It’s thrilling. You know, there would be plenty of bands who would have packed it in or gone nostalgic. But you guys are so fucking vital, and you’re still pushing it forward every time. You’re not taking any shortcuts, ever.

HAMMETT No, no. We’re gluttons for punishment [laughs]. We’ll take the most difficult route every single time, because the hard road has all these hidden bumps that can create really good ripples. I have a bunch of questions for you. What guitar players do you listen to?

CLARK I mean, you always remember the first time you heard Jimi Hendrix.

CLARK It’s a good sign when music scares you. As far as guitarists go, I’ve obviously studied you and people like [avant-garde guitar hero] Marc Ribot.

HAMMETT I love Marc Ribot. He told me that he’s a failed heavy-metal guitar player. I also love all the prog stuff: Robert Fripp, Adrian Belew, Steve Howe, Steve Hackett, and Martin Barre. Adam Jones from Tool hangs out a lot with Robert Fripp, and Fripp showed him this thing to do on guitar that’s a very tedious, slow thing, but it does wonders for my playing.

I have another question for you. Do you feel that your records are proper representations of your abilities? I always feel like I have so much more to say on the album, but I can’t say it.

CLARK Yeah, it always becomes a “kill your darlings” thing. Like, in order for this song to survive, a couple of people have to hop off the boat. You have to sacrifice a couple of ideas in order to make something cohesive. I have a hard time with that.

HAMMETT It’s crazy, because I’m so curious about music in general. I can play a lot of different stuff. I’ll play some jazz, bossa nova, blues, gypsy jazz, fucking Eastern European ballads. I play all that stuff. But no one knows I can play this stuff. It’s so crazy.

HAMMETT I’m always trying to sneak in jazz voicings and chords, little techniques here and there in Metallica.

CLARK Do you ever get shot down?

HAMMETT All the time. “That sounds too bluesy.” And I’m like, “Fucking hell, it’s just a slide. All right, whatever, tone police.” But you need tone police. Tone is superimportant.

CLARK Metallica became a part of my DNA in the years when I started listening to music. It’s just imprinted in me in a certain way. I feel guilty saying music I listened to then means more than things I heard later, but it just does. That’s when you first discover that feeling, freedom, and rage. 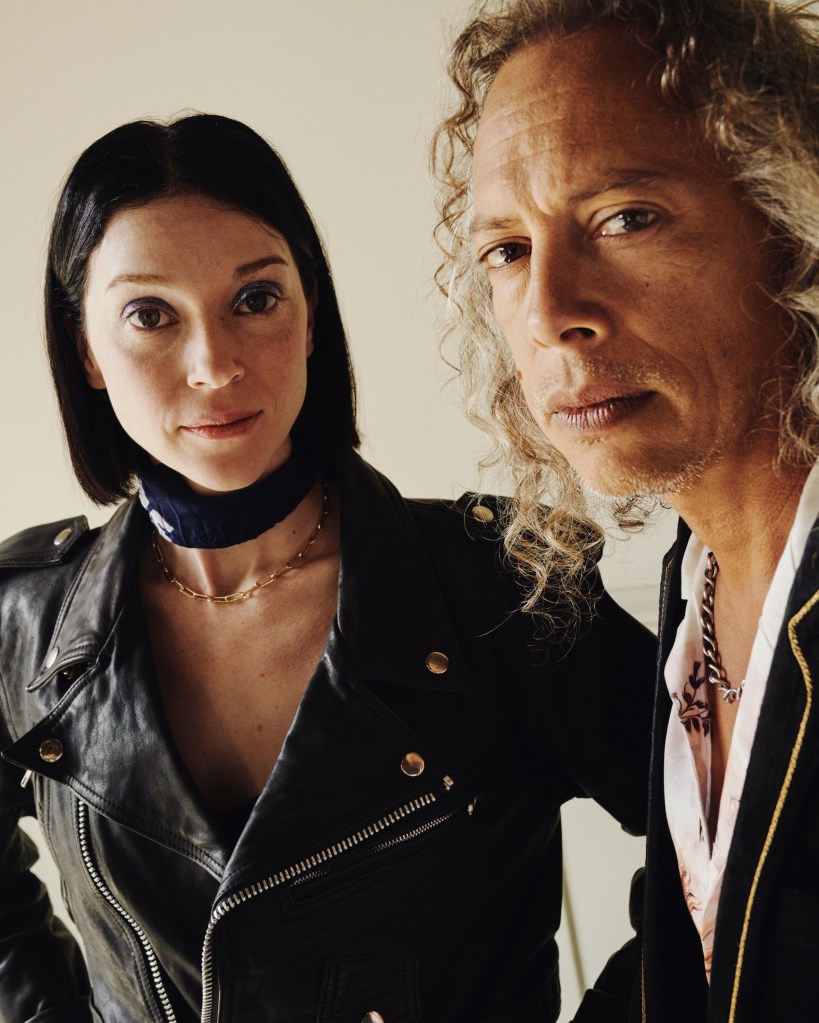 HAMMETT It’s really amazing that the four of us found each other. We managed to have certain things in common. We had disenfranchised upbringings and a lot of anger that’s just deep-rooted. But [also] a real kind of determination to turn that into something musical, exciting, and fun. That’s what we all had in common. It was always just the four of us. And if everyone else wanted to join in on the party, fuck yeah.

CLARK I think that’s one of the reasons why Metallica has spoken to me for so many years. I’m a fucking angry person too, and I just connected to that rage. I grew up in Dallas, in the suburbs. I don’t know that I necessarily presented as an outsider, but I always felt like an outsider. It’s funny because that kind of rage, you have to figure out how to not walk around screaming, doing terrible things.

HAMMETT You can tap into that rage, and good things come out of that. I was a city kid who moved to the suburbs. The culture shock drove me to be even more introverted, so it was good I had a guitar. I discovered that playing was a great way to calm myself down and relax. I literally sat in my bedroom for three or four years and just played guitar, saying, “Fuck those suburban kids.” I didn’t really mean that, but I was angry because of my environment. I wrote the “Die! Die! Die!” riff for “Creeping Death” [off 1984’s Ride the Lightning] when I was 16 or 17 years old. I remember playing that in my bathroom, going, “This is different from a lot of the stuff I’ve been listening to. Wow.”

You can share your music with the world, but deep down, you know that it’s really just yours. I entertain that notion a lot because I’m [still] an introvert. Just the other day, we played “Creeping Death” and people were singing, “Die! Die! Die!” Like, “Fuck, I’m still in my bedroom!”

CLARK I’ve had moments of being onstage somewhere like Brazil, where English is not the crowd’s first language, and I’d see a crowd know every single word to these songs. And I can’t believe it. It actually moved me so much that I started crying in the middle of my song “New York.”

HAMMETT Music has the power to make people feel what you want them to feel. Music can be manipulative, enriching, oppressive. It’s amazing. You have all these powers under music, this complete range of emotions. It’s good that people use it for the best reasons, but there have been times when music has been used for not the best reasons. It’s great that the inclination is to do good with it.

CLARK Being in the crowd last night and feeling the energy was funny, because some of the same gestures you see people do depend on the context. If you see a bunch of people banging their fists in Germany in 1943, it’s fucking fascism. But at your show, that is fucking freedom.

HAMMETT It’s cathartic. And the difference could just be beats and an attitude to change all of that. It’s crazy.

Sometimes I don’t know where inspiration comes from. My wife and I have been composing instrumental music to be played at my museum shows while you’re looking at my [horror movie] posters. We were writing a piece and it was going well, but we needed a whole middle part. I was in Amsterdam, staying at a hotel that was a former music conservatory. I was there one night, freaking desperate. I cleared my head. After I meditated, I said, “OK, I know this was a former music school. If there are any spirits, any sort of inspiration or influence, any sort of molecules or atoms that could guide my hand in this moment, that would be great.” For 15 minutes afterward, it just flowed out of me. I was so blown away. I sent my wife the music instantly.

CLARK If you’re a musician, there’s some part of you that has to believe in magic.