What do you know about Spotify, the Swedish music company? Five researchers who have spent the last several years investigating the inner workings of the global platform would argue that it is neither particularly Swedish nor truly a music company: They posit that Spotify is a shape-shifting tech business, serving as both a warning and a godsend to the record industry, and operating as a mass-media actor as deserving of public scrutiny as Facebook or Twitter.

Spotify Teardown, subtitled Inside the Black Box of Streaming Music and on sale this week from publisher MIT Press (and available on Amazon), is authored by a Swedish social science research team — Maria Eriksson, Anna Johansson, Rasmus Fleischer, Pelle Snickars and Patrick Vonderau — that closely examined the company’s operations via interviews, data observations and, most controversially, what the team refers to as “back-end investigation”: a fake record label that the researchers set up in order to peer under the hood of Spotify’s financial dealings. When such methods caused Spotify to threaten to pull the team’s research funding, the book also became a reflection on the ethics and purposes of auditing technology companies. 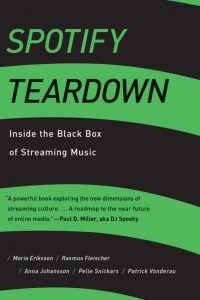 How a Startup Accelerator Is Trying to Find the Next Spotify

Full of canny insights about media disruption and algorithm culture as well as odd tidbits that will delight music history fans (e.g.: Spotify was so revered as a symbol of Swedish innovation that the country’s prime minister gifted Premium accounts pre-loaded with Swedish playlists to visiting dignitaries), the book is as much a chronicle of Spotify the company as it is an open-ended question about the future of music. Eriksson and Snickars, two of the authors, spoke to Rolling Stone about the highlights of their findings.

How did the idea for an undercover investigation into Spotify first come about?
Snickars: Back in 2013, I was in talks with the company because Spotify’s headquarters are in Stockholm, located near where I used to work at the National Library of Sweden. They were quite open about the company’s history and its links to file-sharing and piracy. But when it came to exchange of data, it was a big no-no. When we got funding from the Swedish Research Council, the issue became: How does one get information out of this big and new platform? They weren’t allowing us to get that data. So our project has been similar to what journalists have been doing around Facebook and Twitter, asking: How do you interrogate these new major platforms when you can’t really access the data?

Much of the book discusses how Spotify is not really Swedish or a music company at all. So why do we all know it as such?
Snickars: Spotify has used the label of the “Swedish cool,” which is sort of exotic, at least in the U.S. market. But it resembles any other company who is dependent on financial capital; the investigation we’ve done clearly shows this.
Eriksson: Spotify is not very different from any other tech company. It relies on investment capital and attracting sponsors of various different kinds. And even though the headquarters are located in Sweden, much of the key areas of the company are located in New York or various other global cities.
Snickars: The old-fashioned music industry was bands producing records and selling them in record stores. Today, because of Spotify and others, it’s just a mess of finance, tech and cultural production. The other day it was announced that Spotify is buying a podcast platform. It’s moving in that direction. When you start looking into it, it starts becoming very apparent that it’s not only about music, even though the company is very keen on branding itself that way.

Last year, Spotify created and then walked back a content policy that put a moral spin on the music on its platform. What did you think about that?
Snickars: There’s this constant buzz around Spotify putting up music, taking down music. The main problem is actually that they’re still not owning their content. Some 80 to 85 percent of the money that goes into the company goes out again to labels and artists. This is the Netflix dilemma. They are likely to go into content production themselves, and it’s how they will go about it that is most [interesting].

What are the questions that not enough people are asking Spotify?
Snickars: Spotify has been really successful in branding themselves as the friendly company that delivers music that everybody really loves. That is in contrast to Facebook, for example. But both are about the same kind of thing: getting data, working with data, knowing everything about your users. So one should also pose more critical questions like what one is doing toward Facebook at the moment toward other media or music platforms. What type of content gets promoted? What are the possibilities for new artists to break in? What power do such corporations and platforms actually have?

Why was Spotify, a company that bills itself as open and transparent, so reluctant to share data with you?
Eriksson: Spotify has a history of collaborating with people coming from more tech-oriented fields, like engineers. But what they haven’t done is collaborate with scholars from the humanities or social sciences who are rooted in a more critical tradition, where the aim of collaborating is not to improve their platform or service or algorithms but to ask questions around the role of these companies in society today and the power they have over the consumption of music and culture.
Snickars: We are five humanistic researchers, and Spotify perhaps thought we knew much more than we did. We are basically scratching the surface.
Eriksson: A certain amount of secrecy is key to Spotify’s business, because otherwise it would be easy for people to trick or fool their algorithms. But our research also coincided with Spotify entering the stock market, which is a sensitive period in any company’s history. The book is not about destroying Spotify as a business or sabotaging what they are doing. It’s more about tearing down or rethinking the role of Spotify as a company and the common narratives that’ve been told about it. That was the original idea: to use the notion of ‘teardown’ as a starting point to rethink what Spotify is doing in the music industry today.

What has the reaction to your research been like so far?
Snickars: I don’t know about reactions from Spotify yet, but in Sweden there has been quite a bit of debate over the issue [during the writing of the book]. Spotify contacted the Swedish Research Council and basically threatened to cut our funding, and they got quite a bit of negative press for that. The head lawyer at the research council had never before heard of a company that tried to threaten a research group — and Sweden is a small country, but this research council handles quite a lot of money.

Are you already planning other investigations? What shape will they take?
Eriksson: What feels most important to continue working on is the issue of legality, which came up due to the work we did. It feels important to write about the meaning this might have for scholars who are trying to understand what large tech companies are doing — these actors who often keep their businesses very closely sealed in black boxes and are not willing to talk publicly about the way they rank content or profile users.
Snickars: The field around algorithmic auditing is something we need to pay more attention to. No one really knows how the YouTube recommendation algorithm works, for example. In order to understand it, you have to do research that breaks the terms of service. We would argue that it has to be the case in these types of scholarly or journalistic activities, which would have tremendous ramifications.