Spotify wants the world — including the full gamut of Wall Street — to know that it messed up. As reported Wednesday, the company’s global subscriber count grew to 108 million in the second quarter of this year, up by 8 million quarter-on-quarter, but short of a consensus analyst forecast of 109 million.

Spotify was conspicuously keen to pin the blame for this stumble on itself. After founder and CEO Daniel Ek delivered the “on us” line during the intro to Spotify’s Q2 earnings call, the firm’s stoical CFO, Barry McCarthy, echoed the very same words. McCarthy was quizzed by Ben Swinburne at Morgan Stanley on how a lukewarm take-up of Spotify’s student discounts might have contributed to the subscriber shortfall. “[We] had no marketing support for it at all,” said McCarthy of the student offer. “So that’s on us. It’s a relatively easy fix.”

This keenness to chalk up Spotify’s global subscriber disappointment to factors entirely within the company’s control was summed up by Ek when he said, “The good news is the shortfall was execution-related rather than softness in the business, and we expect to make up the lost ground before year-end.”

Spotify's Biggest Artist of 2019 Was Smaller Than Last Year's. Why?

Yet what if Spotify’s failure to hit the higher portion of its own guidance on subscriptions isn’t actually within the company’s jurisdiction? What if, in fact, it reflects a macro-industry trend which is looking increasingly likely to cause Spotify — and its nearest competitors — serious strife before 2019 is out?

Such questions come to mind when you observe an obvious pattern taking place in global music streaming this year. And with Spotify not only the market leader in audio music subscription, but also the sole publicly traded “pureplay” music platform (since Pandora was acquired by SiriusXM), it could be doubly exposed.

In short, streaming subscription growth appears to be slowing in the world’s most lucrative markets. In the United States, according to MBW analysis, the year-on-year increase in volume of audio streams seen in the first half of 2019 was 5.4% smaller than that seen in H1 2018: In Jan-June this year, the number of audio streams in the U.S. (333.5 billion), according to Nielsen data, was 72.5 billion bigger than in the same period of 2018; last year, this growth number stood at 76.6 billion. That’s a fall of more than 4 billion streams year-on-year.

A similar pattern is also taking hold in the U.K.: in H1 2019, the market, according to BPI stats, saw year-on-year audio streaming volume growth of 10.9 billion; yet in the same period of 2018, that YoY growth was higher, at 11.8 billion. The USA is the world’s biggest recorded music market, according to global trade body IFPI, while the U.K. is its third. (Half-year digital numbers for the second biggest market, the relatively streaming-shy Japan, are yet to be confirmed). 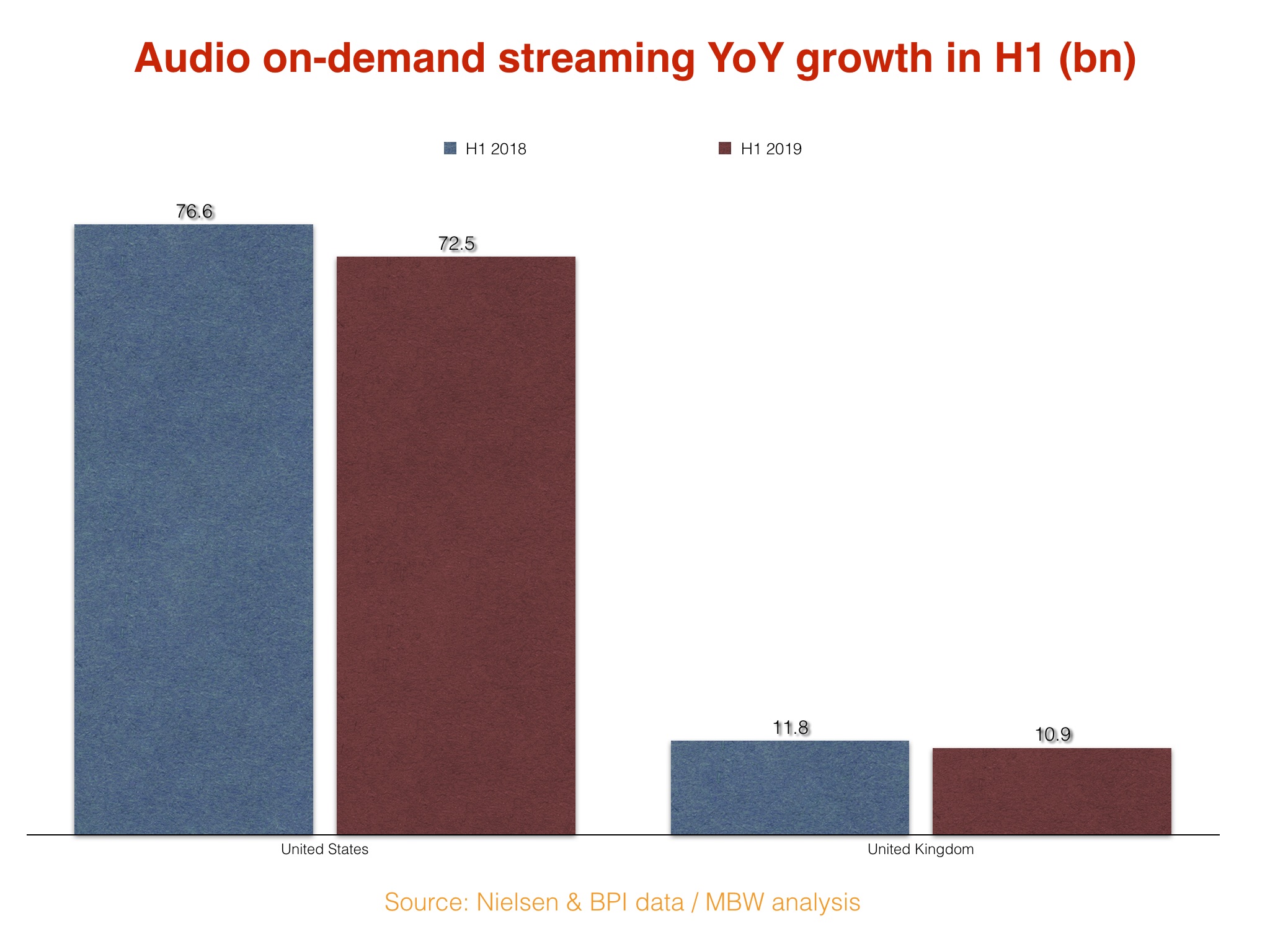 This deceleration in streaming growth in the USA and U.K. is likely a sign of the early stages of subscriber saturation. According to the RIAA, there were approximately 50 million paying music streaming subscribers in the U.S. last year, representing around a sixth of the population: a big question mark hangs over how high, and how fast, this number can climb in future.

Streaming growth slowdown in the U.S. (and beyond) in 2019 already appears to be being borne out in the music industry’s commercial numbers. According to my calculations, both of the world’s biggest music rights companies — Universal Music Group and Sony Music Entertainment — saw a deceleration in commercial streaming growth in Q2 this year. Universal’s dollar-level Q2 streaming revenues ($937.1 million) were up by $172 million on the equivalent figure from 2018; however, its Q2 2018 streaming haul ($765.5 million) was up $223 million year-on-year. Sony Music, meanwhile, saw its Q2 recorded music streaming revenues ($605 million), grow by $127 million on the prior year quarter; yet in Q2 2018, this figure was also up by a larger amount, $132 million, year-on-year.

It should be noted that both Universal and Sony posted very healthy growth in Q2 2019 — Universal’s record numbers being led by Billie Eilish and Ariana Grande, with Sony’s being led by Khalid and Lil Nas X’s global smash streaming hit, “Old Town Road.” Both companies will know they can’t bank on forever maintaining the pace of huge streaming subscription revenue increases they posted last year. 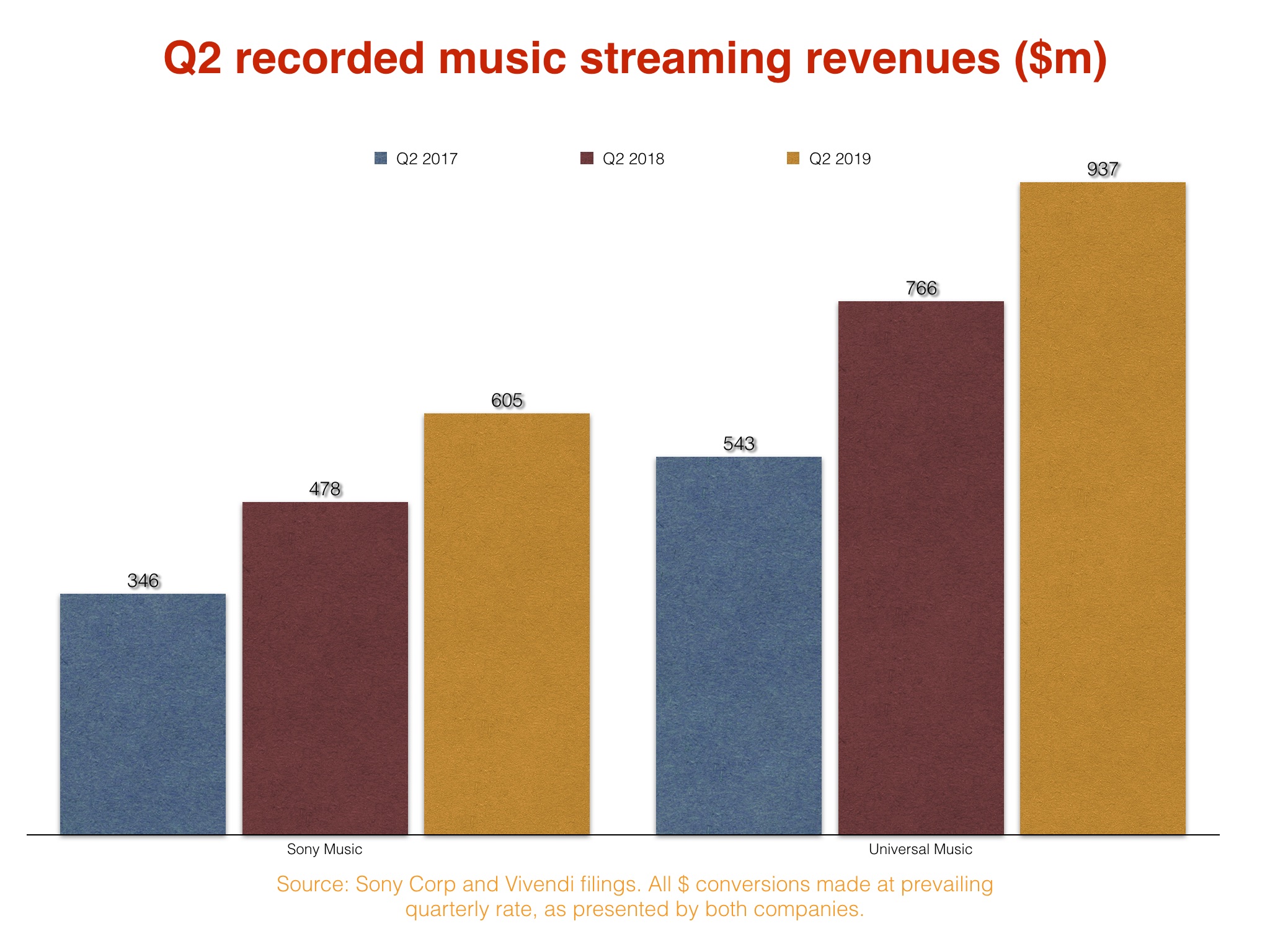 This is less of a problem for the major record companies than it is for Spotify, which may soon find itself regularly pinned to subscriber growth targets it simply cannot hit. In the case of Q2 2019, Spotify actually grew its subscriber base quarter-on-quarter at the same pace (+8 million) as it did in Q2 2018. Yet, over the past 12 months, Spotify has launched anew in two huge territories — in India (population: 1.3 billion) and in MENA (the Middle East and North Africa).

Spotify’s own breakdown of its global subscriber figures shows that it added less than a million (800k) subscribers in ‘Rest of the World’ territories (outside Europe, North America, and Latin America) in Q2. It added  three times this amount in North America where, as we’ve established, streaming growth numbers are showing signs of slowing down, rather than speeding up.

By seeing off the likes of Apple Music and Amazon Music as the world’s number one streaming subscription service in recent years, Spotify has set itself a daunting pace of growth. Doubts are now creeping in as to whether it can keep it up.