Spotify, whose losses are an evergreen music-biz talking point, just turned a quarterly profit. This news not only came as a surprise to the music industry at large, but to Spotify itself.

The streaming company previously forecast to its investors that its operating performance in the three months to end of September would weigh in somewhere between a slender €2 million profit and a €78 million loss. In the end, Spotify posted a €54 million ($60.4 million) Q3 operating profit – some thirty times bigger than its predicted highpoint. Indeed, this profit figure was so substantial, it actually dragged up Spotify’s year-to-date (Jan-Sept) operating profit to €4 million ($4.5 million).

This is the second time in history that Spotify has posted a quarterly operating profit. It finished Q4 2018 some €94 million ($106 million) in the black, although it attributed much of that to “slower than planned headcount growth” – i.e. its own shortcomings in finding, and paying money to employ, the expert staff it wanted.

Spotify’s latest profitable performance is a rather different matter, because the company’s not making any excuses for it, or apologies for it. Here are three key reasons it happened.

1) More Premium revenue than expected – with a healthier margin attached

Spotify finished Q3 with 113 million subscribers on its platform globally, up 31% year-on-year, outstripping the pace of growth among “free” users (+29% YoY to 141m). The company put this “better than expected” subscriber growth entirely down to the popularity of its discounted Family Plan and Student Plan offerings.

A note from Spotify to investors last week revealed that: “Premium Gross Margin was 26.5% in Q3… up [0.4%] Y/Y.” In other words, before operating costs, Spotify retained comfortably over a quarter of every dollar spent on premium subs in Q3.

Meanwhile: “Ad-Supported Gross Margin was 16.0% in Q3… down [2.6%] Y/Y.” In other words, before operating costs, Spotify retained less than a sixth of every dollar generated by its ad platform in Q3… a percentage which dropped significantly compared to the prior year.

Conclusion: Spotify’s gross profit on each premium user is much higher than its gross profit on “free” users – and while the former figure is improving, the latter figure is getting worse. This spells positive news for Spotify’s underlying business model – so long as it can maintain its current mix of paying to free users. That task will surely become more difficult when SPOT launches in Russia, which is expected to happen in the weeks and months ahead.

2) (Slightly) less money, as a percentage, is being paid to artists, songwriters, labels and publishers

Spotify is now on a rolling licensing contract with two major music groups – Universal Music Group and Warner Music Group – as it thrashes out fresh multi-year deals with both parties. Spotify doesn’t expect to significantly improve the percentage of royalty revenue it pays out to these companies within these new agreements – but that wasn’t the case last time around.

New deals with Universal, Sony Music and Warner in 2017 led to significantly boosted terms for Spotify regarding how much of its overall revenues it gets to retain. Its frank pitch to these labels two years ago? Let us keep more of this money, or our business is screwed… and you need us. The strategy worked. As now-outgoing Spotify CFO, Barry McCarthy, subsequently described it: “The labels were acting in their own self-interest to shore up Spotify’s economically challenged margin structure.”

This shoring-up process appears to be going rather well. There is a line in Spotify’s quarterly accounts for ‘Cost Of Revenue’ (COR), which ‘consists predominantly of royalty and distribution costs… which we pay to certain record labels, music publishers, and other rights holders’. In the first nine months of 2019, Spotify’s COR gobbled up 74.6% of its total revenues. That might seem like a painful amount of money to give away, but it’s significantly down on the 80.7% Spotify sacrificed in the same period of 2017. It’s also slightly down on the equivalent period of 2018.

These small improvements are making a real difference: There was a 0.18% reduction in Spotify’s COR as a percentage of total revenues in Q3 2019 vs. Q3 2018. That 0.18% improvement meant Spotify kept just over $3 million more in Q3 2019 than it would have otherwise.

Spotify’s latest accounts further reveal: “In our agreements with certain record labels, the percentage of revenue used in the calculation of royalties is generally dependent upon certain targets being met… with minor exceptions, we are effectively currently meeting [these] targets and consequently we are generally paying the lowest percentage of revenue possible.” 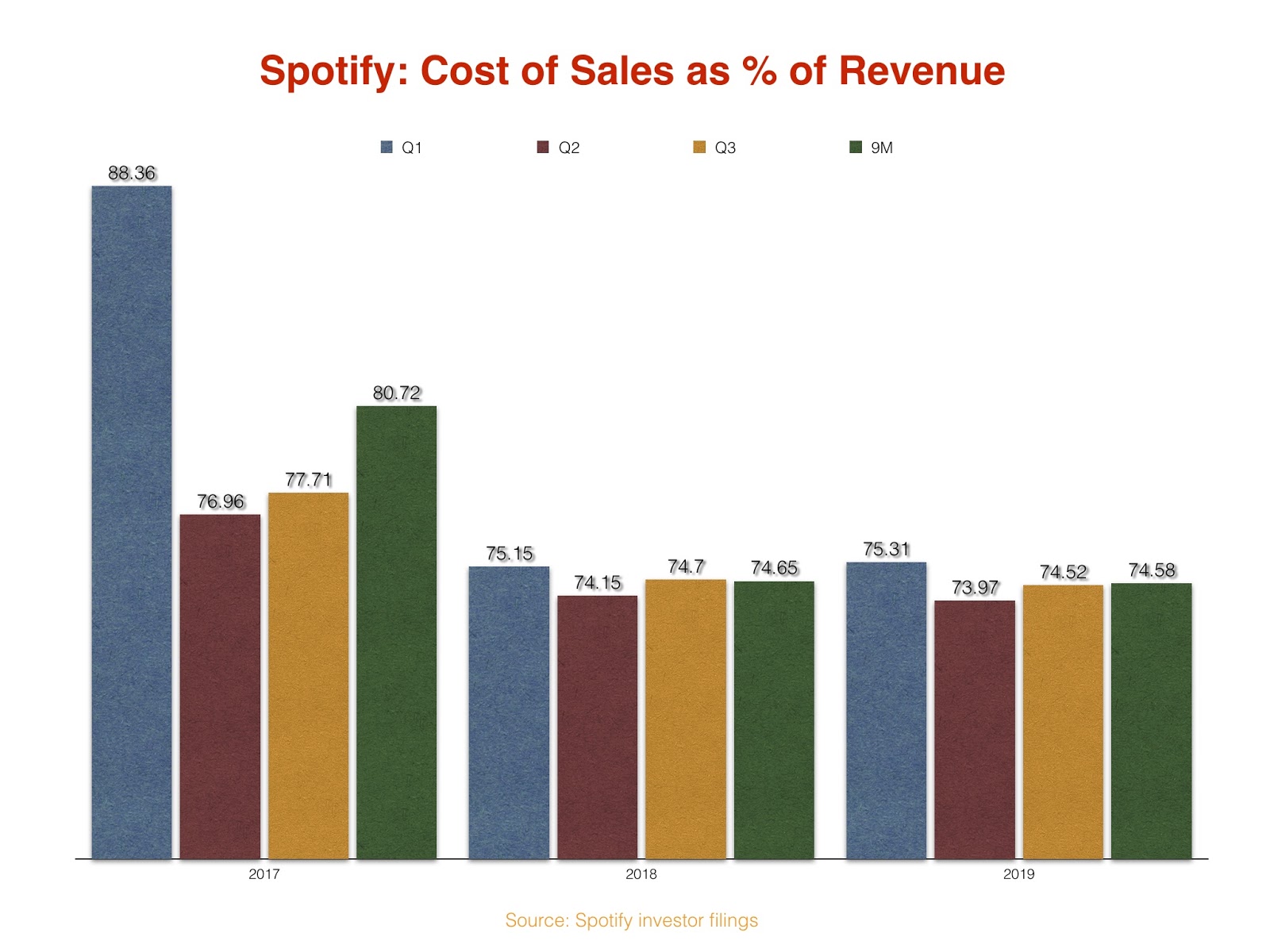 3) A big chunk less money is being spent, as a percentage of total revenue, on product improvements – and on sales & marketing

Arguably the biggest factor in Spotify’s new-found profitability is simply this: It’s making improvements to its products… without spending much more on the engineers responsible. According to its accounts, Spotify’s expenditure on Research & Development (mainly engineer staff costs) reduced dramatically in Q3 as a percentage of total revenue. It fell to 7.9% in Q3 2019, versus 10.0% in the same period of the prior year. That resulted in a YoY 2.1% comparative improvement, which in terms of Q3 2019’s total revenue (€1.73 billion) was worth €36 million ($40.2 million).

Still, Daniel Ek boasted of Spotify’s recent product innovation when speaking to analysts on his company’s Q3 earnings call. He particularly cited the launch of the data-saving Spotify Lite product in emerging markets, plus better music recommendations for new users. He said these were amongst “many small additions that [have added up] to overall stronger engagement and stronger retention [of our] core user behaviors.” 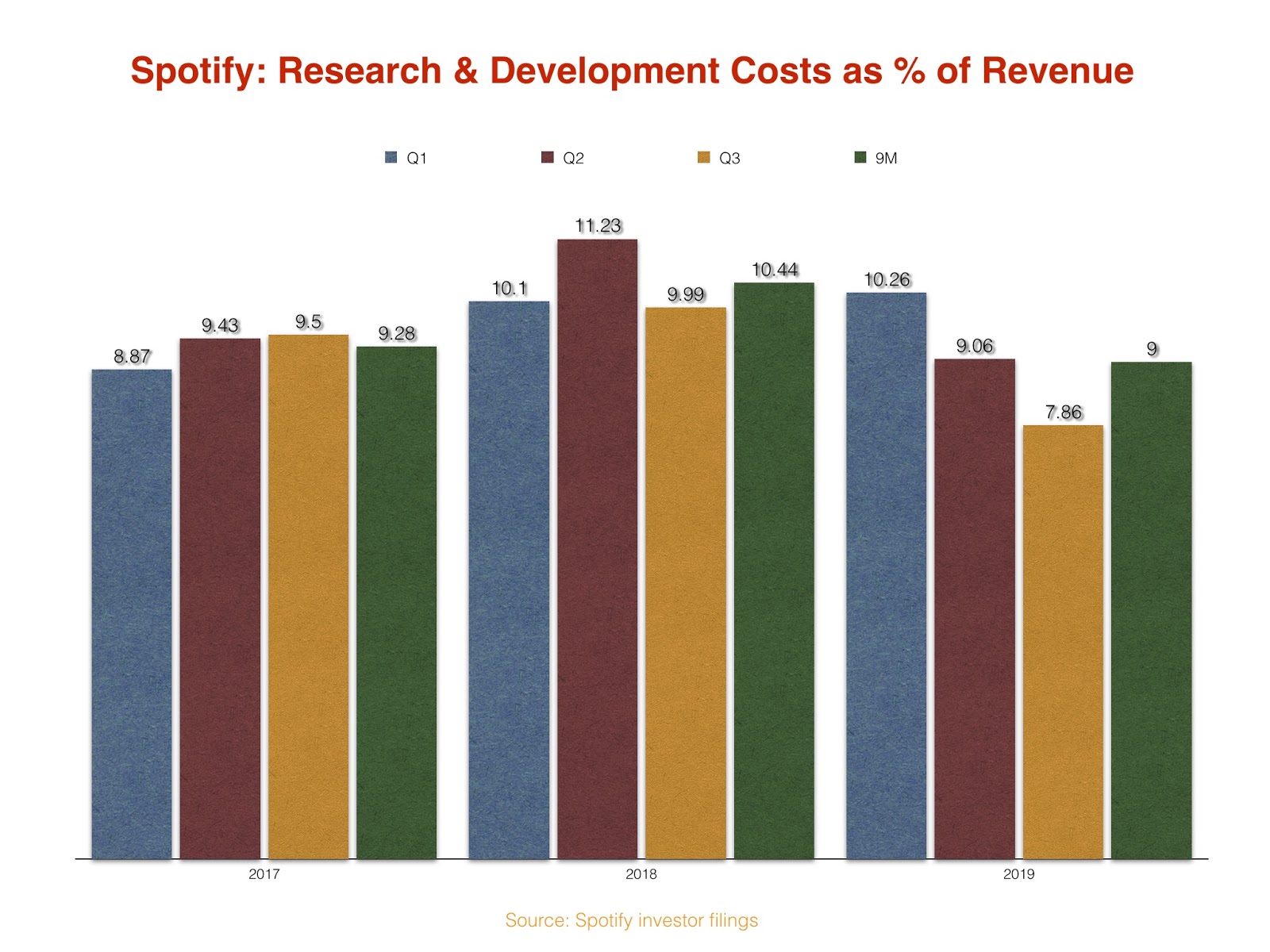 Spotify’s expenditure on “Sales & Marketing” was also a factor in its $60.4 million Q3 profit. According to the firm’s accounts, this category primarily comprises salaries paid to its marketing staff, plus live events, PR and branding activities, advertising and “the cost of working with music record labels” – a.k.a. Spotify shelling out for those big artist billboards you always see in Times Square.

In Q3, as a percentage of total revenue, marketing costs devoured 10.3% of Spotify’s incoming money. Yet this figure improved by half a percent on the same period of the prior year. And in Q3 2019, that half a percent improvement was worth €8.7 million ($9.7 million) to Spotify’s bottom line. (Meanwhile, in another relative saving, “General & Administrative” expenses – including some employee salaries – claimed 4.2% of SPOT’s total revenue in Q3 2019; in the same three months of 2018, that percentage figure stood at 5%.)

Certain senior members of the music business have long bemoaned Spotify’s expenditure on its employees, its flashy parties and its general overhead. The company’s Q3 results suggest that SPOT is beginning to put a lid on increases in these (and other) outgoings. 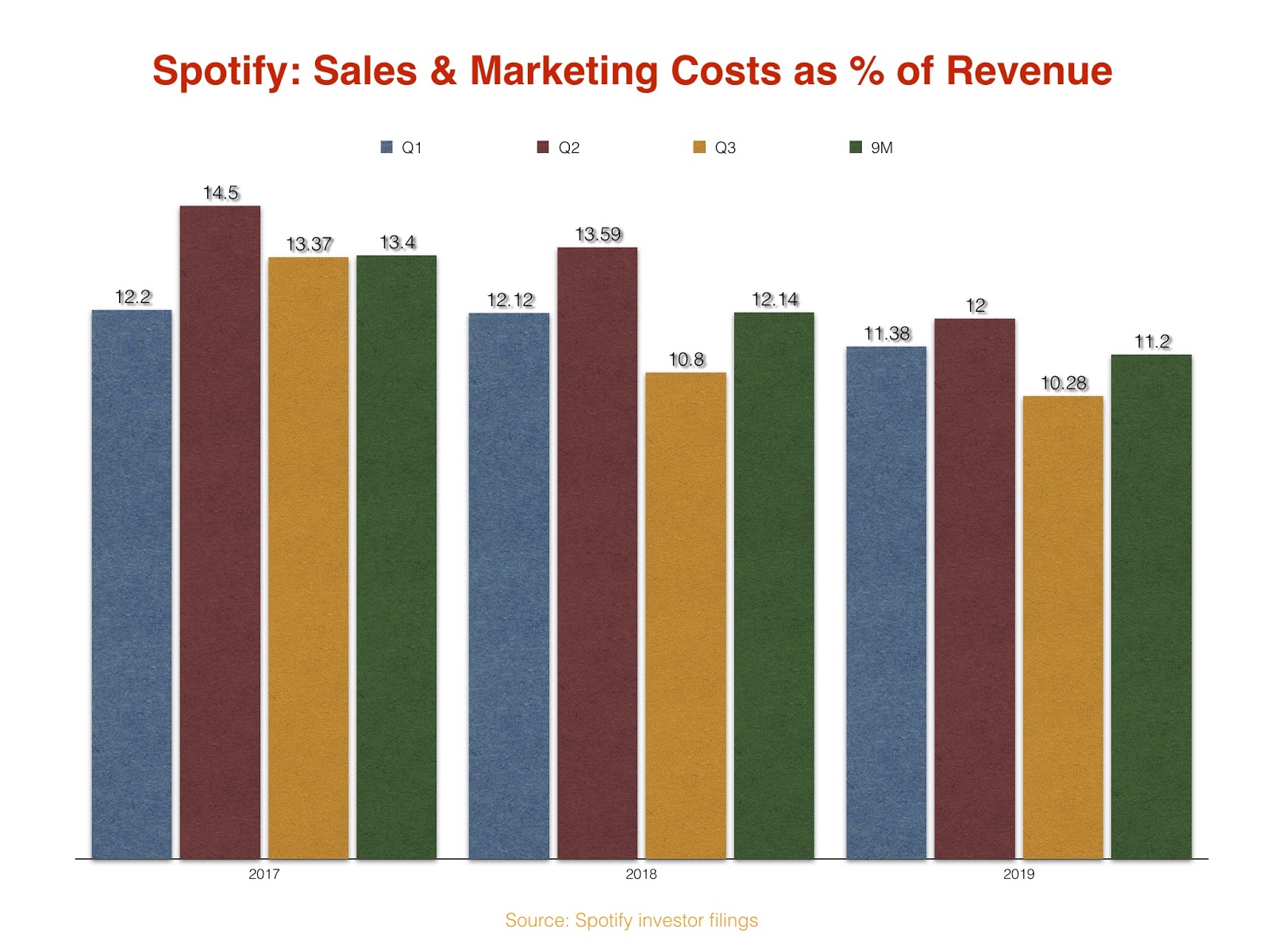 We do know, however, that Spotify’s Q4 coffers should get a boost from a controversial area. Last month, Spotify launched its first on-platform advertising pop-up, which record labels can purchase in a similar vein to buying ads on Instagram or Facebook.

The biggest drain on Spotify’s finances is royalty costs paid to record labels; those same record labels will now be paying money back to Spotify in the form of ads. Spotify calls this its “two-sided marketplace” strategy. (Spotify CFO Barry McCarthy even noted on SPOT’s Q3 2019 earnings call that major labels buying the new pop-up ads would equate to “expense offsets in the form of, let’s say, lower content costs“.)

Spotify’s prospects of long-term profitability look healthier than they have for some time. But don’t expect fiscal tensions between it and the world’s biggest record companies – nor the fireworks that can sometimes ensue as a result – to go away just yet.