“There’s a lot of things about Chris [Cornell] that people don’t know,” Soundgarden guitarist Kim Thayil tells Rolling Stone. “He didn’t bring a lot of baggage. Meaning, he didn’t carry a lot of things or materials or relationships within his life. He was a little bit independent of that. He traveled lightly.”

It’s late October, and Thayil is slumped on a black leather couch in the green room of the Metro club in Chicago, gamely sharing memories of his longtime friend and bandmate. He’s just come offstage after running through a tight soundcheck with the MC50, Wayne Kramer’s all-star MC5 tribute band, ahead of a barnburner of a show a few hours from now. Almost 29 years ago to the day, he was in this exact same room along with Cornell, drummer Matt Cameron and bassist Hiro Yamamoto while Soundgarden were touring in support of their album Louder Than Love.

The reason Thayil is opening up is because of a new four-disc, career-spanning box set simply titled Chris Cornell that the singer’s estate will issue on November 16th. Now available for preorder, the set features 88 songs that show off the full breadth of Cornell’s incredible musical life from his earliest beginnings with his iconic band Soundgarden to the one-off supergroup Temple of the Dog, his heady years with Audioslave in the early 2000s, and the whole span of an eclectic solo career that saw him writing James Bond theme songs and collaborating with hip-hop producer Timbaland. There’s also a bevy of unreleased live cuts, including a touching duet with his daughter Toni on Bob Marley’s “Redemption Song,” recorded at the Beacon Theater in New York.

As Thayil explains, the goal going in was to capture, “the breadth of his career, and the large spectrum of stylistic approaches to songwriting and the growth that was shown.” He added, “Obviously Chris isn’t there to put in his two cents, so we have to try to appraise what his feelings and sentiments will be. There are some cases where I remember distinctly that Chris didn’t like this song, or he didn’t like this record, or he didn’t like this particular version, so it’s like, ‘Let’s don’t use it.’”

Opening with “Hunted Down,” the very first Soundgarden single released by Sub Pop Records back in 1987, the collection winds through the many twists and turns Cornell took through his artistic life in a largely chronological format. You can listen in real time as his skills as a songwriter refine and develop. “The lyrics get a little bit more sophisticated, I think maybe a little more poetic,” Thayil notes of Cornell’s progression. “Maybe in the early days it was a lot of songs about dogs and the sun, you know?”

Though Cornell wrote most of Soundgarden’s lyrics — “It makes sense for the singer to write the lyrics, especially if you’ve got a great singer,” Thayil says — and a lion’s share of the songs, they were always a collaborative band. Even as Cornell became more confident in his own abilities as a songwriter and would compose fully realized demos on his own — his early, home-recorded version of “Black Hole Sun,” for instance, sounds shockingly similar to the final version on Superunknown — he typically left room for the other members of the band to add their own spin.

Just like anyone, Thayil has his favorite Cornell songs, like the Ultramega OK cut “Beyond the Wheel,” which sadly didn’t make it onto this set. “I think it’s pretty brilliant,” he says. “Psychedelic, heavy, a little sprinkle of evil.” He’s also very partial to “Rusty Cage,” which did make the cut. “There’s something about the guitar riff there that’s really imaginative, and the arrangement is not a verse, chorus, verse, chorus arrangement. It’s kind of like this A chorus and then this B section and it ends with this other entirely different riff.” 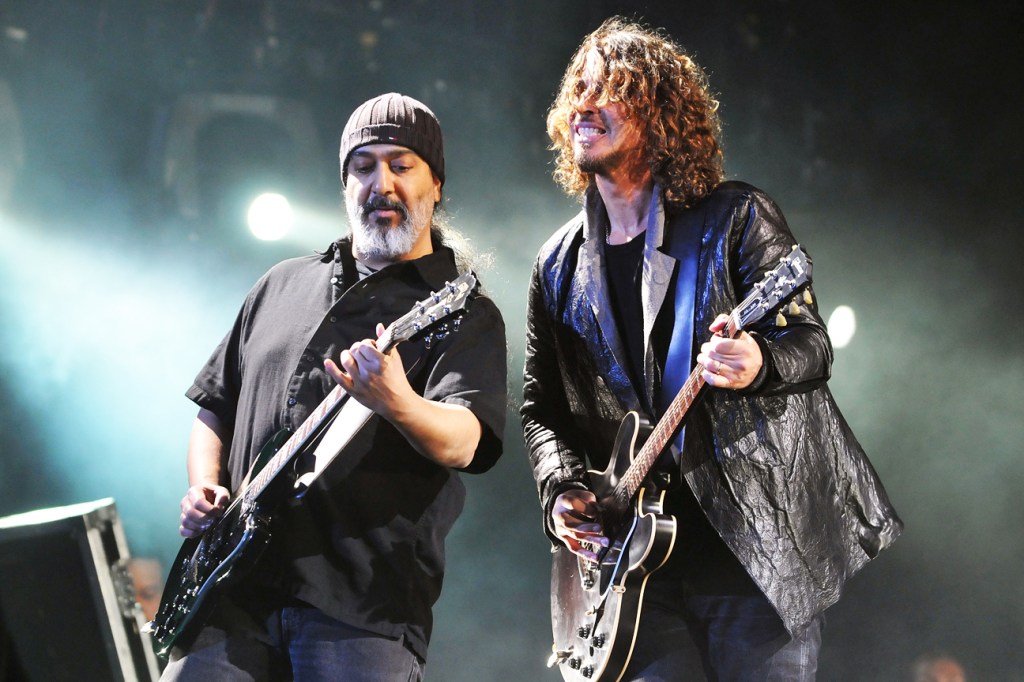 Beyond his songwriting, one of the most mesmerizing aspects of Cornell’s artistry was his ability to adapt his otherworldly voice to fit different moods on different songs. From the banshee wails on Audioslave’s barnburner “Cochise” to the subdued and sulky Singles-soundtrack solo cut “Seasons,” he knew exactly how to use his instrument to wring the most amount of emotion from a given piece. For instance, not many rock or metal singers are capable of pulling off something as gorgeous and understated as the rendition of Schubert’s immortal “Ave Maria” included on Chris Cornell. “I think the main thing is to represent his versatility,” Thayil says.

Cornell was also a natural at creating compelling re-interpretations of other people’s songs. There’s his husky take on Jimi Hendrix’s “Hey Baby (Land of the New Rising Sun),” the simmering version of Michael Jackson’s “Billie Jean,” the soaring rendition of Prince’s “Nothing Compares 2 U,” and of course Soundgarden’s inspired spin on the Black Sabbath classic “Into the Void,” where Cornell substituted Ozzy’s lines for a speech written by 19th-century Native American leader Sealth that fit the same meter.

For Thayil, a huge consideration when picking out the tracks for the box is how they might be viewed now given the nature of Cornell’s death. “One of my concerns was just making sure there weren’t any difficult lyric or themes. Just keep that off,” Thayil says. “There’s lyrics, or titles that may not be appropriate in this context. That might be difficult for friends, family.” That presumably meant that Superunknown cuts like “The Day I Tried to Live,” “Like Suicide” and Down on the Upside standout “Pretty Noose” were left out of the discussion entirely.

Because of the darker content of a lot of Cornell’s writing, many people got a sense of him as a brooding loner, but that’s not exactly the guy that Thayil remembers. “He was like a normal kid,” the guitarist says. “Very funny and very fucking goofy.”

Another consideration was to make sure that the contents of the comp stayed out of the way of some future projects that might eventually see release, including some new, unheard Soundgarden songs the band was refining at the time Chris died. “We were working on an album before everything came to a head, so we have some pretty strong demo material that we’re still trying to finish developing and accessing some of the recording material, to be able to flesh it out,” Thayil says.

If “When Bad Does Good,” the one unreleased studio song included on this set, is any indication, Cornell’s songwriting chops were only growing sharper as he grew older. You can thank Cornell’s friend Josh Brolin for the song’s inclusion here. The actor reminded Cornell’s widow Vicky of the song and his love for it after the singer had sent it to him to get his take on it. Written, recorded, produced and mixed by the singer himself, it again demonstrates the completist tendencies that Thayil alludes to. It’s a particularly powerful final statement from the singer-songwriter, with a clear message of hope.

Though Soundgarden has already put out a ton of unreleased archival material in recent years, as on the 25th-anniversary box set for Badmotorfinger, the 20th-anniversary box set for Superunknown and B side collection Echo of Miles, there’s still some tantalizing material left in the vaults. That might include the fabled 15-song cassette tape that comprises the earliest recordings the band made, even before their debut recorded appearance on the Deep Six compilation in 1986, when Cornell was still on drums.

“In terms of audio quality, that’s all 4-track stuff that we did in our basement,” Thayil says of that particular set of songs. “It’d be like bootleg-quality type stuff. But I think fans would appreciate that. At some point we’ll do that. That’s three-piece stuff, me and Chris and Hiro.”

“He was a really good drummer,” Thayil notes of Cornell. “He’s not like Matt [Cameron] but he wrote great as a drummer. I think so much so that Hiro and I entertained the idea of getting another singer so that Chris continued to write with us on drums. But Chris really want to get up from behind the drum kit, so he brought in a friend of ours, Scott Sundquist, on drums. It freed him up, and he got to do all the singing.”

Though there really isn’t a future for Soundgarden without Cornell, Thayil remains in touch with both of his other ex-bandmates on a pretty regular basis. In fact, he recently joined Cameron with Pearl Jam onstage at Safeco Field in Seattle, and the drummer has also played several gigs this year with MC50. The trio also memorably reunited in early October for the unveiling of a bronze statue of Cornell just outside the Museum of Popular Culture in Seattle along with the singer’s wife and three children.

“I talk to Matt all the time. We text, we’ll go out to dinner together with family,” Thayil says. “Ben and I will text out of the blue. We have so many mutual friends in common that we tend to cross over and see each other.”

Whatever may become of the recordings Cornell left behind, Thayil is determined to remain involved to help oversee them. “I’m gonna do the stuff that I’ve always done which is basically oversee the catalog, and the whole band would participate in that to some degree,” he explains. “But a lot of the time it’s kind of been my focus and concern from day one.”

In the meantime, he’ll keep playing with the MC50. A few days from now, he’ll actually be back in Detroit, the same city where he performed his final gig with Cornell. “I know that on paper it seems like something that’d offer closure, but I doubt that’s gonna happen,” he says. “Poetic irony too, that, playing with the Motor City Five.”