Nobody was more shocked than Sammy Hagar when his 2011 memoir Red: My Uncensored Life in Rock shot to Number One on the New York Times Best Sellers list. “It was just a grand slam,” he tells Rolling Stone. “And I give credit where it’s due. It happened because you guys [Rolling Stone] ran an excerpt that Howard Stern saw and brought me on the air. After that, it was like, ‘Bang! Number One!'”

His publisher asked for a follow-up immediately after. “They were pushing me and pushing me and I didn’t have anything in mind,” he says. “I realized that fans want to learn something about me they don’t know. They got that in the last book with my childhood and everything that really went on with Van Halen. I thought to myself, ‘I want to bring the fans another step. I’m going to tell them what I’m doing when I’m not rocking.'”

Sammy Hagar: 'I Would Agree to a Van Halen Reunion Tour for the Fans'

It turns out that meant writing what he describes as a “lifestyle cookbook” called Are We Having Fun Yet? The Cooking and Partying Handbook. “I want to tell people how I live,” he says. “And then it’s a manual for them. I explain that you don’t need to be a billionaire to have a good life. You might not have the jet and multiple houses, but all the things I do with my wife and kids – like cooking, eating, drinking, barbecuing – you can do too. Fuck, if you don’t have a swimming pool or a beach in front of your house, turn in the damn sprinkler and fire up the grill. A billionaire doesn’t have a better time doing that than a guy broke off his ass.”

Cooking has been a huge part of Hagar’s life since he was four years old. “I would stand on a stool and help my mom and grandpa,” he says. “It developed my nose. My mom was a great cook, and when you walked into my grandfather’s trailer you’d think you were walking into the best deli in the world. Smelling great things at an early age was the beginning of everything.”

The book isn’t just recipes. It’s packed full of great stories, like drinking ludicrously expensive wine with Lars Ulrich at Masa’s in San Francisco to cooking meals for the on-and-off-again vegan Bob Weir to the endless hassles that came up when he opened up the Cabo Wabo Cantina with Van Halen. When the band went into meltdown mode in the mid-1990s, Hagar agreed to gave up his share of the Van Halen trademark in exchange for their share of Cabo Wabo. It proved to be a wise deal.

Many of the recipes in the book are fairly simple, and Hagar hopes it inspires novices to start cooking. “Cooking for the first time is like walking onstage for the first time,” he says. “Your fucking dick goes soft if you’re afraid. It’s the same thing as driving a car 200 miles per hour. At first you don’t want to do that shit either, but eventually you get used to it.” 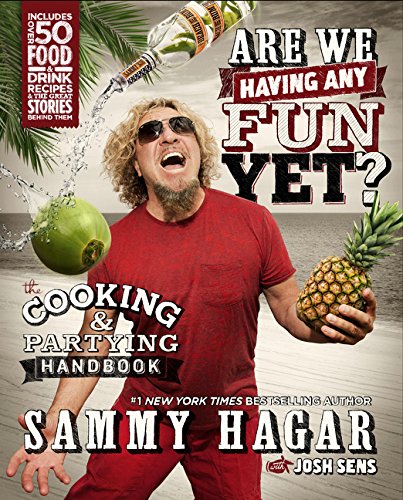