When Mariah Carey sang about everlasting love on 1996’s “Always Be My Baby,” she probably couldn’t have envisioned its rebirth as “Project Baby,” a story of squalor and perseverance by 24-year-old Mobile, Alabama, rapper Rylo Rodriguez. “Catch a DUI, these bills driving us crazy,” he sings in place of Carey’s classic chorus. “But they don’t feel me, ’cause I’m just a project baby.”

“I was going through old beats from back in the day,” Rylo says over the phone. “Back in the day, you’d watch 106 & Park and shit, that’s the kind of songs they used to play on that motherfucker. I don’t hear too many people doing stuff like that.”

This kind of clever pop recontextualization comes naturally to Rylo, real name Ryan Adams, who’s proud to have grown up in Mobile’s Roger Williams Housing Projects.  “I wouldn’t want to be from nowhere else,” he says. “It’s fun growing up in the projects.” In less than a year, he’s become Alabama’s mush-mouthed bard of sampling, creating new works out of R&B and pop songs from artists like Tamia and Leon Bridges. On YouTube, he’s a prince, racking up 2 million to 9 million views on his most popular videos, even if those same songs can rarely crossover to platforms like Spotify or Apple Music for copyright reasons.

Rylo’s music is grounded in the Mobile he grew up in, from its working-class inhabitants to the justice system that preys on them. Of all the people who helped shape his early life, he speaks most fondly of his grandfather, a veteran who worked at a country club. Rylo jokes that he never needed a job, let alone an ID, because his grandfather would take care of him, along with his mother, two brothers, and sister. Then came a series of tragic dominos falling. “My granddad died, my grandma died, my uncle died, all in the same year,” he says. “As soon as my granddaddy died, somebody had to step up.”

On his 2019 song “Court Dates,” Rylo sang over a simple guitar riff about his friends’ entanglement with the criminal justice system. It was an early breakthrough; Lil Baby, one of the biggest names in Atlanta rap, featured in the video. Not long after, though, Rylo himself spent time behind bars in another state for what he describes as “a gun and some pills.” “I would be like, ‘I want to go to jail, just to see my homeboys that’s in jail,'” he says. “[Then] I got locked up. I really jinxed myself. Stupid-ass shit.” 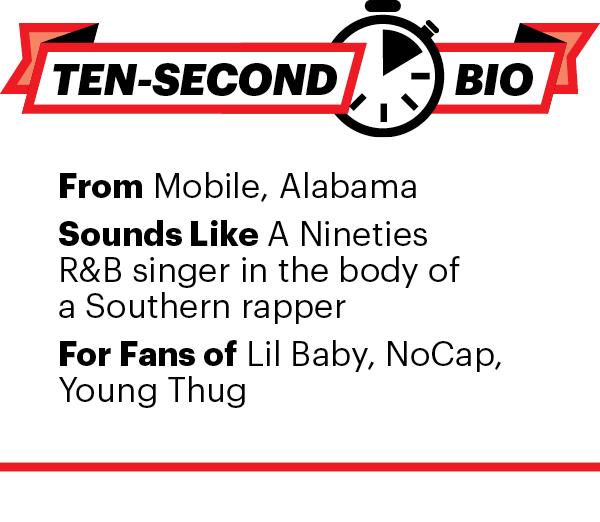 His life has turned around lately, especially since he signed to Lil Baby’s Four Pockets Full imprint. They first met at a studio session for one of Rylo’s friends, and they quickly became close collaborators. “I’m really fucking with bruh, on some loyalty shit,” Rylo says. “He kept his word.”

As he works on his first full-length album, Rylo says he’d like to move on from the sample-based songs that’s made him famous. “I’m trying to get away from it, for real,” he says. “Like the Mariah Carey [song], I won’t get paid for that.”

The thing he’s happiest about is his ability to provide for his mother and siblings, the way his late grandfather once did. “That shit crazy, because I used to be the one asking for money,” Rylo says. “My momma told me, ‘You’re Granddad now.’ That gotdamn made me smile.”