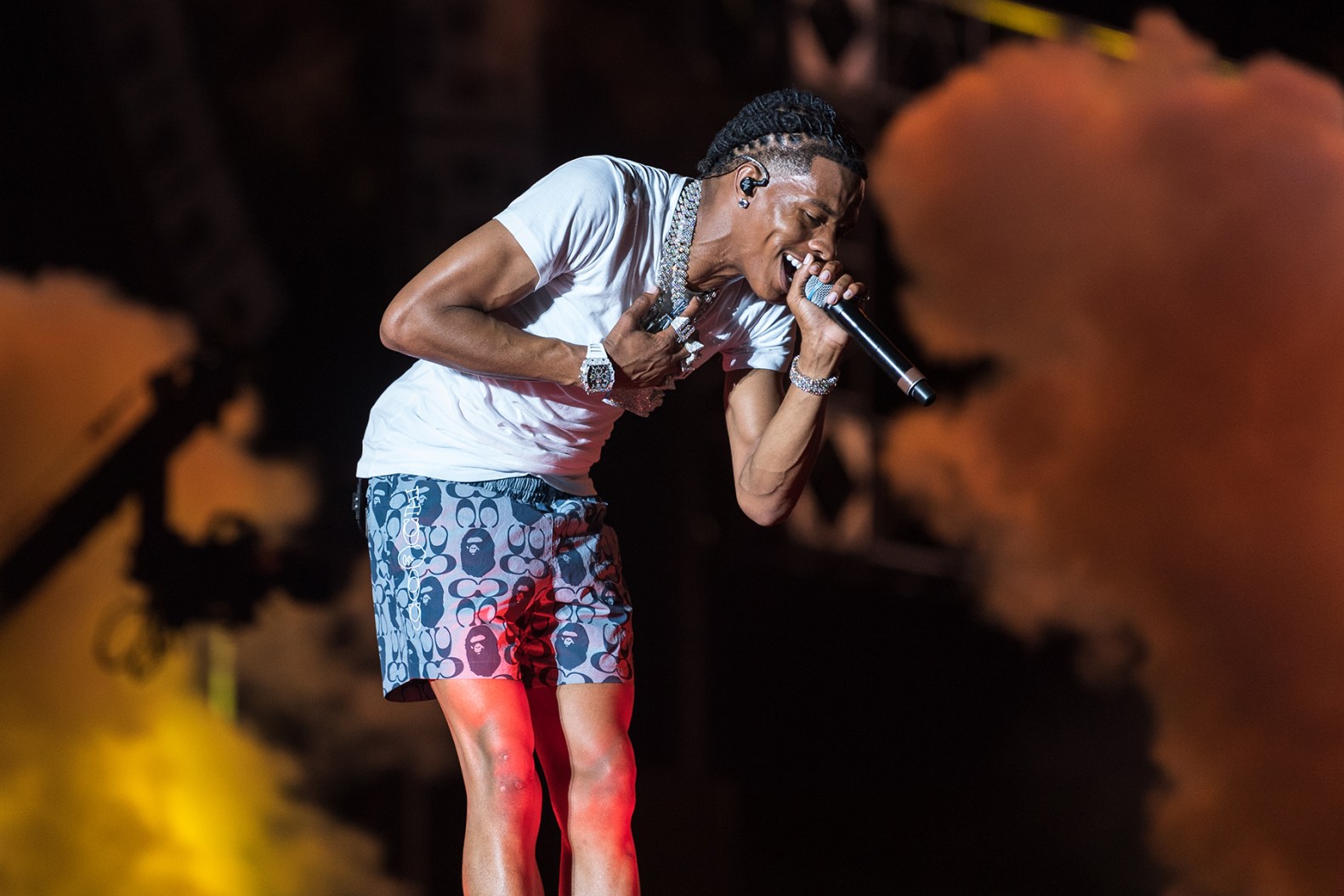 When Rolling Loud Miami’s 2021 return was announced, it felt like every rap star in the country was on the bill. The 130-artist line-up included hot names like Megan Thee Stallion, Lil Baby, and Playboi Carti; veterans like Fetty Wap, Gucci Mane, and T-Pain; and newbies like Morray, Ken The Man, and Kenny Mason. As one of the country’s first major IRL fests since 2019, it felt like Rolling Loud got every young person in the U.S. to Miami this weekend, too. They moshed, sang, and danced, warmly welcoming the acts back to massive stages. These are the acts that wowed us most across four stages.

It feels like every rapper at Rolling Loud wants to see mosh pits to their music. “Open that shit up!” the artists and their DJs bark at the crowd. As masters of the mosh, these rappers can at times lose sight of their lyrics and lose stage presence as they throw themselves up and down and across the stage — but not Travis Scott, who got perhaps the wildest crowd response of the festival’s most rowdy rappers while maintaining his performance’s lyrical integrity. From “Highest in the Room” to “No Bystanders,” from a swinging platform above the stage to its runway, he controlled his breath and his energy during his impressive headlining set. “This shit right here is for the ragers and for the ragers only!” he said to the audience, clear as day.

Lil Baby was so comfortable on stage that he essentially wore pajamas for his performance — a crisp white t-shirt, matching crew socks in sneakers, and blue patterned shorts. The only way you’d know he wasn’t dressed for a Target run would be the blinding jewelry he wore on his hands and the diamond chains guarding his chest. Even more brilliant than his jewelry was his stage presence as he rapped his setlist with a level of projection and precision that many acts at the festival could stand to learn from. He worked the festival’s biggest stage from end to end, complemented by water-gun-firing, T-shirt-launching dancers, rappers EST Gee, 42 Dugg, and Rylo Rodriguez, and stunning graphics and lighting. The beloved modern rap star still performs like he has something to lose.

Latto, a brash rapper who tasted fame as a young person on a rap reality TV show, did unspeakable, jaw-dropping things to her microphone. Her explicit pantomime was well in line with the show’s bold sexuality. The rapper shook and twerked through cute choreography while spitting her songs, an impressive feat of balance and athleticism that’s hard for a performer to achieve. She caressed herself, her hands decked out in a two-inch manicure, while bragging about her prowess in bed on songs like Chris Brown and Young Thug’s “Go Crazy” remix and her own “In n Out.” She taunted the audience about their embrace of her scandalous performance, too: “Y’all nasty!” she teased.

Megan Thee Stallion swerved in and out of her five projects with finesse, performing throwbacks cuts from Tina Snow, including the star-making “Big Ole Freak,” alongside her hit “Savage,” and latest release “Thot Shit.” In a particularly impressive run, Megan performed “Sex Talk,” from 2019’s Fever, “Ride or Die” from the Queen & Slim soundtrack, and “Captain Hook” from 2020’s Suga — a bouncy collection of delightfully vulgar songs that capture Meg’s power and allure. In just a few years, Megan has developed a healthy discography that she took care to showcase.

Fayetteville, North Carolina, is a four-hour flight from Miami, but ‘Ville native Morray entered a new stratosphere with his Rolling Loud debut. An early evening crowd on the thinner side — dampened but undeterred by stubborn rain showers — gradually thickened as Morray slid through a set of his soulful rap ballads. Though he sings of street strife, he was all grins and jest in his set. “Y’all here to see a fat nigga?” he exclaimed, severely underselling all that he is. By the time Morray launched into his final song, the deceptively jovial and relentlessly addictive “Quicksand,” fans were bolting across the field to the stage lit by Morray’s stunning pyrotechnics and undeniable star power. Catch Morray on J. Cole’s U.S. tour this fall for a dose of his magic.

Has anyone ever cried while doing the shmoney dance? Because seeing Bobby Shmurda cranking his arms and legs to “Hot Nigga” on Rolling Loud’s biggest stage wasn’t just joyful, it was spiritual. In February, Bobby was released from a New York correctional facility after six years incarcerated, a sentence that began just as songs like “Hot Nigga,” and “Bobby Bitch” were becoming rap anthems. His story has been one of many heart-wrenching tales of hip-hop behind bars, and the well-loved Brooklynite was met with the reception he deserved. Bobby didn’t save all the admiration for himself, either. He honored Rowdy Rebel, his friend and collaborator, with a performance of their timeless New York party-starter “Computers.”

Spin Fast: SoulCycle Just Knocked $1,000 Off Its At-Home Exercise Bike for the Holidays

Young Thug’s performance could have been one of the festival’s strongest holistically if his sound wasn’t so muddled and set not cut short. Thug emerged on stage for his Friday night show as a puppet master, commanding a sea of dancers in violently pink sweatsuits that matched his unseasonable bubble coat, bold graphics, and sparse locs from on high. Stuffed into bejeweled hot pink pants, Young Thug announced his upcoming album, Punk, a work he’s been floating since 2019. He didn’t provide a release date, but gifted the audience with a new song from the project — a speedy, promising track he called “Tick Tock.” His performances of released music, like “Ski,” “Surf,” and “Cartier Gucci Scarf,” were elevated by the cohesion of his set design, and unfortunately marred by technical difficulties.

Kaash Paige brought the intimacy of live music, the unique and irreplaceable relationship between artist and fan sharing a space, whether there’s an audience of 10 or tens of thousands. She opened with a love song (named “Love Songs”), but her performance amped up to match the crowd’s more rowdy energy. Kaash conducted mosh pits from the stage until she realized she could join them, flailing herself off the massive runway into the crowd with a running start. It was bold and incredibly dangerous, but Kaash was desperate to connect with fans. She ran through the pit to every corner of the audience she could, large security men sprinting behind her. She sang to fans directly, tenderly holding their hands. After telling her onlookers she loved them at least eight times, she had another heartfelt message for them, tied to her own experience. “To any motherfucker with a dream…” said the Dallas singer, “…it’s coming for you, my G.”

In a tripped-out forest of inflatable cacti and mushrooms with a matching digital background, Don Toliver gave eager fans a show. He treated the main stage as if he was decorating a college dorm room — going all out in a space that would only be his temporarily — and that effort and personalization made for an enthusiastic audience. The signee to Travis Scott’s Cactus Jack Records only doubled down on the intrigue with his distinct warble, fluid dancing, and a string of popular songs like “After P­­arty,” “Lemonade,” and “Backend.”

Leave it to Rico Nasty to make a bright red mullet fashionable. The raging rapper’s wild hair, intense makeup, and innovative school girl chic skirt made her look like a rock icon. As she tore through clamorous cuts like “Trust Issues”  and “IPHONE,”  more people ran into the Monster Stage’s tent to catch Rico, fans in the front chanting her name loudly to coax her on stage. By her third song, the tent was packed out. “Don’t it feel good to be back?” said Rico with an air of relief. “Surrounded by bad bitches and good energy!”