G rowing up in Compton in the 2010s, Roddy Ricch listened more to the Atlanta rap hymns of Future than to his iconic West Coast forebears. (“I was born in ’98,” he has said. “What do you expect me to rap like?”) He’s since become one of the most popular artists in the world with the borderless melodic instincts heard on his unstoppable hit “The Box.” So it makes sense that Roddy, 22, would request to speak with Future, 37, who is celebrating nearly a decade as one of rap’s most prolific hitmakers, with an influential style that uses alien vocal processing to accentuate deeply human pain. Future has spent most of that time as a critical and listener darling, too, with the possible exception of 2014’s Honest, which stands as an outlier in his catalog for its warmer, gentler tones. The two artists discussed the keys to a long career, the advantages of home recording, and the importance of staying above the fray. Since their conversation, Roddy was nominated for six Grammys, including Record of the Year for “Rockstar,” his hit with DaBaby, and Song of the Year for “The Box.”

Future: How old were you when you were like, “Now I wanna start doing music?”

Future: What were you listening to?

Roddy: You, [Young] Thug, Kendrick [Lamar]. Good kid, m.A.A.d. city came out on my birthday — October 22nd, 2012. I remember getting that album [and] just vibing, feeling it out. It took you on a trip through Compton, where I’m from, and I could relate to it. I felt different elements in the music.

When I was like 12, I went to Chicago, and I heard about Chief Keef and shit. Being from [Compton], it was the first time I heard some shit different from where I was from. That caused me to be like, “OK, what’s the other shit from everywhere else [sound like]?” I always wanted to know what you listened to.

Future: I was listening to all the Cash Money, all the No Limit artists, Trill Ent. artists, all the J. Prince [artists]. But I also listened to Ruff Ryders, everything that came from Ruff Ryders. I listened to the Murder Inc. shit, all that Roc-a-Fella shit. I listened to Method Man, Redman, Talib Kweli.

Roddy: What are you listening to right now?

Future: Right now, I listen to nobody. I never really listen to one particular person; I can’t rap one verse from nobody’s song in the world. But I love everything about different people. I love Bob Marley, and I love goddamn Johnny Cash. I love fucking Green Day. I love Coldplay just as much as I love Juvenile. And I love Juvenile as much as I love Jimi Hendrix. I’m very versatile when it comes to music, I listen to everything.

Roddy: That’s how I be. I listen to old, old shit. I’ve been listening to Chaka Khan, Snoh Aalegra, Anita Baker, you know, Sade.

Future: Right. I’m in this position where I’m trying to change the world, so I ain’t trying to listen to what’s going on in the world.

Roddy: That shit makes a lot of sense.

Future: Did you go to a real studio, or did you make one in your room?

Roddy: In the room. My uncle used to try to rap. I learned how to use Pro Tools watching him. But I didn’t really know what was going on until I took it into my own hands. That’s why I understand sound — how music is supposed to sit behind vocals — and arranging.

Future: I can see that. I’m always like, “Man, I wish I knew how to record myself.” I hear it a whole different way than the engineer does, but I can’t really tell him in words or show him [what I’m hearing]. I’ve always gotta settle for 98 percent. There’s no one particular way to record: Sometimes you might freestyle, sometimes you might hum a melody, sometimes you might write it down in your notes.

Roddy: Yeah, [my sense of melody] just comes from within. It’s a natural instinct. I feel like my shit is different every time. You always want to improve your sound, that’s the whole thing. You’re always trying to push it further, to change it up.

Future: I’m from the hood, so [on my earliest songs] I always was making wordplay out of what they was talking about on the block. It was fresh, because nobody had ever heard that side of my neighborhood, as far as the lingo, like “Fuck up some commas” or “racks.” Nobody was talking about racks, but we was talking about racks in the hood: “I’m getting racks.” The world wasn’t hip to it. They had probably heard of lean, but they weren’t hip to us saying “dirty Sprite.”

Roddy: I make music for niggas that I came up with, so they always felt the music from the very first time I ever said something on a beat. We all came up together. We all we got.

Future: You were a breath of fresh air from the West Coast for sure. You could hypnotize [someone] off the rip — it was new, fresh, fly, melodic. That’s why you’re here right now. You waited for a second, then attacked the lane.

Roddy: When everyone else is moving fast, I tend to question that. Why is everything moving so fast? Let me kick back and move a little slower. That’s just how I am. I’m more of an observer than a person who moves.

“Man, if I went back to 22, I would slow down, listen more, observe more, instead of moving so fast,” Future says. “I like the way you’re taking your time with everything.”

Future: Man, if I went back to 22, I would slow down, listen more, observe more, instead of moving so fast. I like the way you’re taking your time with everything, critiquing the art. I might have missed something that I could’ve painted better, [but] I skipped over and went to the next thing … dropping three mixtapes in three months. Moving too quick.

Roddy: What’s the key to your longevity?

Future: Staying in the studio and blocking everything out. No matter what’s going on in the world, you got here from music. You didn’t get here from how you wear your hair, or how you dress, or what hood you’re from, or from nobody around you. If you’ve got the right music, you can get another lawyer. If you’ve got the right music, you can make more money to buy another house. If you’re in the house crying about certain shit that’s going on … get over it. Go to the studio, make a hit about it.

Roddy: I feel like you should leave everything in the music.

Future: But, you know, they’ll judge you. You can’t say, “I’m fucking two sisters at the same time” now and put it on the internet. The internet is gonna go crazy. But when it came out [in 2015], then it was a cool thing to say. If you say that shit right now, they’re gonna explode. You can’t say certain things. I see people say certain things in their music and I’m like, “Nigga, I was talking crazier than that at the beginning, [but] you can’t say that right now.” You can’t even write a tweet without apologizing.

Roddy: That’s why I’d rather not say shit. 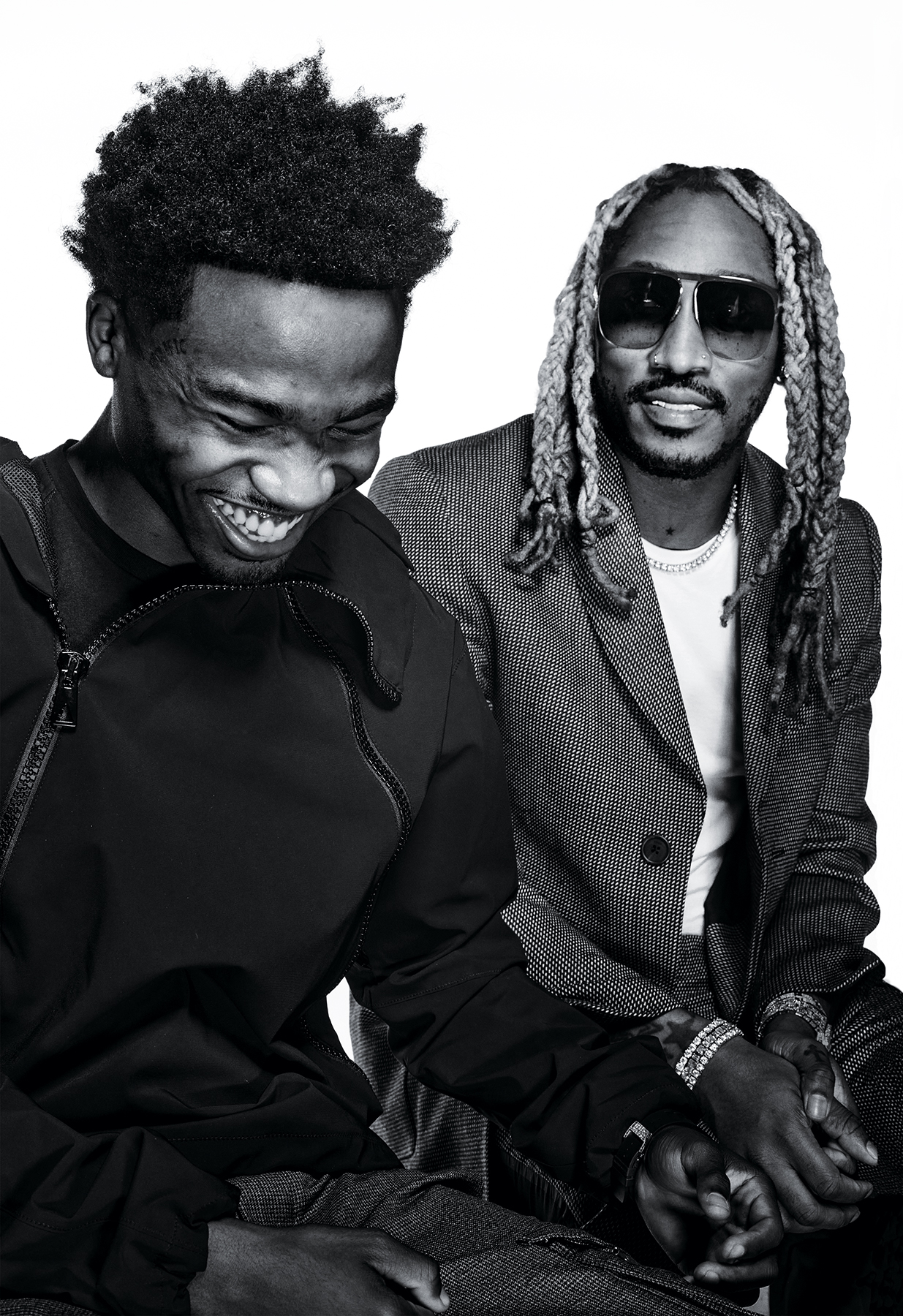 Future: Within five minutes, here comes the apology. “I’m sorrrrrrry.” [Laughs.] You should’ve never said that! You have to adjust to the times. You’ve gotta think before you say something. I’m in a space where I just don’t care about certain shit. [Both laugh.] I built the brand where they’re like, “That’s Future, don’t pay attention to him. He’s fucked up anyway.” For me, I can get away with shit. You can get rich off of being the villain, because that’s what they expect. If I try to be a good guy right now, they won’t want that. “Where’s the bad Future at?” Then I [become] that, and my concerts sell out. You start talking about [being] in love, and they get mad at me. I be like, “What the fuck, y’all don’t want me to be in love? Ahhh, man!” Why I gotta be the one who can’t do nothing?

Certain stuff might be a viral moment for y’all, and we might not even want that moment. I just want to be a thousand-percent honest, to tell the truth.