For four days earlier this year the Black Madonna vanished, slipping away between sets at Coachella and an appearance at Guadalajara club Bar Americas. In the turmoil and chaos of a life packed with travel, Facebook posts and Instagram photos, one of the most influential and respected DJs currently on the scene managed a disappearing act amid a 150-show-a-year calendar.

But for one show in April, she found herself sequestered in a Long Island studio surrounded by friends, family and superfans — playing what was arguably one of her most exclusive and most revealing live sets to date. Now that performance — which was recorded inside a Rockstar Games motion capture studio — is part of Grand Theft Auto Online as the latest addition to both its monstrous catalog of in-game songs and as a way for players to host their own nightclubs, complete with real DJs and their iconic music.

The Best 4K TVs For Gaming

GTA V and its multiplayer GTA Online mode has already proven itself a thriving game and money maker for both developer Rockstar and publisher Take-Two — with sales approaching 100 million copies and bringing in more than $6 billion, now one of the most successful video games in history is also becoming something else, perhaps not too unexpectedly: A powerful tool for music discovery.

Rockstar as Tastemaker
Use of music has always been something video game makers Rockstar prides itself on. From the Billy Holiday, Ella Fitzgerald and Dinah Washington songs found in L.A. Noire, a detective action-adventure game, to the mix of 1970s rock in The Warriors game, music is one of the more important elements of pop culture that the developers use to help create memorable times and places for its titles. Nowhere is that more evident than in the long-running Grand Theft Auto series. While the franchise has always featured some sort of working, in-game radio stations, each new iteration expanded on the concept. By 2013 and the release of GTA V, the game’s 15 unique radio stations, packed with 240 fully licensed songs and pre-recorded on-air talent, had become nearly as important as the game itself.

While the game was record-breaking at release — earning $800 million in its first day and $1 billion in the first three — it is the game’s online mode that has allowed it to thrive beyond earlier expectations. And GTA Online continues to introduce new music in new ways as the game itself continues to push the sale of the half-decade old game.

In the five years since launch, GTA V and GTA Online gamers have listened to more than an estimated 75 billion minutes of music from the game’s 18 radio stations, according to Rockstar’s own analysis provided to Rolling Stone. Taking place inside the game’s bars and now in player-run clubs, the music is produced by its four well-known DJs, including the Black Madonna. And dance music, in particular, plays an important part of Rockstar Games’ own culture.

“Everyone in the company has a passion for music,” says Ivan Pavlovich, director of music at Rockstar Games. “We live this music. We go out all of the time. We’re constantly following people, watching, listing to sounds at clubs and places like Boiler Room.”

Pavlovich, who founded Chicago-based house music record label Guidance Recordings, was drawn to work in games specifically because of the obvious care Rockstar takes in crafting its soundtracks. He worked on two soundtracks for the developer before coming to work at Rockstar Games but notes that the work on GTA Online’s music is like nothing he’s done before.

The biggest effort to date, however, came with the release of a massive update to GTA Online called “After Hours.” The expansion adds to the already absurdly large, multi-faceted farcical recreation of life in Los Angeles, the ability to purchase your own nightclub, run it legitimately or as a front for organized crime and hire DJs to keep the place packed.

The free game addition came with renowned deep house DJ Solomun as a signed act. Over the course of four weeks, the game also added Tale of Us, Dixon and the Black Madonna. Instead of licensing a few songs from each, Rockstar decided to do something much deeper: They wanted to recreate the DJs themselves in the game, injecting not just their music, but their personalities into it the virtual world.

Getting a DJ to play your club usually kicks off with some sort of in-game mission. With Solomun, for instance, you have to follow his suddenly pilot-less jet as he tried to make an emergency landing in L.A.

“I think we always had this sense of collaboration with the DJs,” Pavlovich says. “We’re not just going to ask them to create a song. To take it up a notch in this pack, we invited all four of the DJs to motion capture. We invited all of their tech riders, invited friends, family, managers, fans from around the city. We literally threw a party in the mo-cap studio and captured it all.”

Pavlovich explains they went to great pains to not only provide the gear and fans for the private mo-cap sets, but also worked to replicate every little detail. So they brought in whatever a DJ drank, their entourage, their manager. And they motion-captured everyone and everything.

“We were trying to get their motion, their energy as a DJ,” he says. “We called them signature moves, the way they throw their hands up or dance a little bit — like Black Madonna does certain moves with the cross fader that are maybe different than Solomun. It was a way for us to capture their natural environment.”

Each of the DJs in the update made a pilgrimage to Rockstar in New York City and then out to Long Island and that motion capture studio where they performed music to an extremely select set of people. Pavlovich says the scheduling was incredibly tight, both because of the packed schedules of the musicians and the need for secrecy. Rockstar also did motion capture with each DJ for the missions that would occur around their appearance in the game. For instance, Black Madonna, suited up in a motion capture suit, got to punch a fake cop for her bit — a request she made of Rockstar before accepting the gig.

“I was obviously excited,” the Black Madonna says. “It was sort of an odd thing to think about.”

The capture sessions often went over the scheduled time as well, simply because the DJs and the people there to hear them perform didn’t want to stop after they got going.

“This full experience is the biggest we have ever done musically,” Pavlovich says. “Capturing this truly authentic experience of being in the club and feeling like you are in it. All of that attention to detail.” 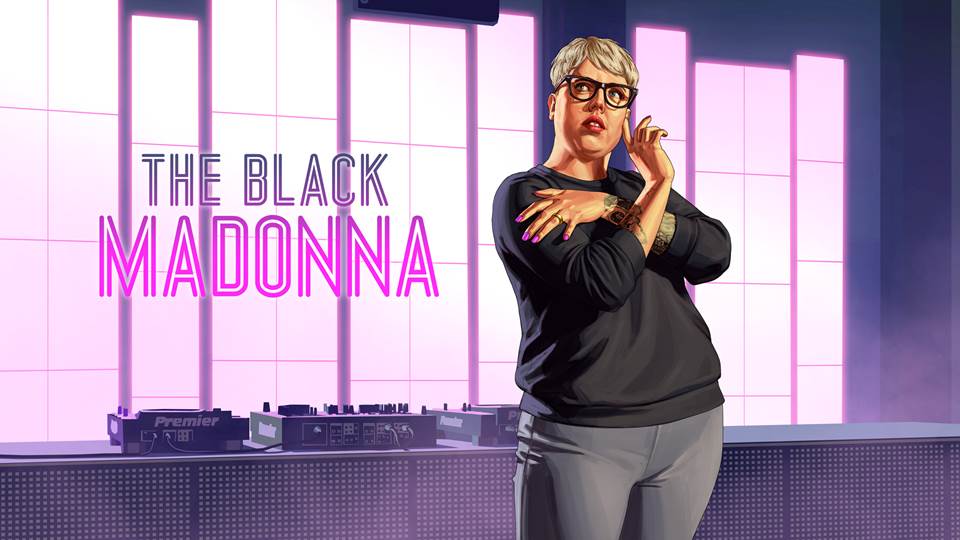 Capturing the Black Madonna
“The offer came through my management, but of course I was very familiar with the game,” Marea “The Black Madonna” Stamper explains to Rolling Stone. “A copy of it for PS4 is sitting in front of me right now. My husband loves the game and I have played it over the years.”

Rockstar reached out to her management company about being put into the game, and Stamper decided she’d do it, but only if she could really be in the game. “I didn’t want to come in and have it be an image of me being random DJ number three.” Fortunately, Rockstar was looking to capture everything about Stamper.

On April 23rd of this year, Stamper flew from Coachella to New York City, quietly slipping into town without any notice or fanfare. She left on April 26th, heading to a gig in Guadalajara, Mexico.

“I spent two days in New York under extreme secrecy,” she reveals. “You kind of don’t want anyone to know you are there. Everything was super under lock and key.”

“I thought it was incredible,” she says of her 14-hour day of capture. The DJ set turned the facility into a nightclub, complete with low-lights and her favorite bourbon to drink on stage. “The motion capture experience is so different then when they actually skin the universe onto it. When you do motion capture it is skeletonized. So when you get into the cop car, the car is made out of this wireframe stuff. The cameras have to be able to see through it, to see you and everything has the motion capture dots on it. We even had little motion capture handcuffs that went around my hands.”

The Future Is Now
Giving GTA Online players another way to have fun in the game, this time by creating a sort of nightclub simulator, was an important part of the “After Hours” add-on. But it wasn’t the most important reason Rockstar went to so much effort.

“One of the things we always want to do is expose people to music,” Pavlovich explains. “Exposing people to dance music, jazz, dance hall, even when we’re doing soul stations [in GTA], we’re trying to expose people to songs they may not have heard already. We’ve always seen our job as curators of music for the experience of GTA.”

That music is important because it helps players connect more powerfully and emotionally to moments in the game, be they a scripted scene that plays out like a movie, or some bit of bone-headed goofiness a player gets up to on their own.

“Whether it’s Table Tennis or Red Dead Redemption, the experience is something that connects the gamer to those songs,” Pavlovich says. “It’s the same way you hear a song for the first at a high school dance or make out with some girl with music playing in the background. It forms a long-lasting connection with that music.”

That exposure in the game can also have a significant impact on the musicians.

“There is no question about it, this changed my fanbase within a month,” Stamper says. “People who love GTA and love the music — but don’t have clubs in their hometown. There are people who tell me, ‘You’re my favorite DJ, but I’ve never seen you DJ in person and now you’re a permanent resident in my club in GTA.’” Now those fans can go into a game and watch the Black Madonna perform “live” right in front of them.

“It’s a real democratization of clubland in a way I had not considered,” she says. “I just thought it would be fun to do this, to get in a motion-capture suit and punch someone without consequence. I wanted to be in it to make that music and be a part of that legacy of people who contributed to the soundtrack. But I was not prepared for or expecting that in a very, very real way people would be connecting in a completely real, heartfelt way with this experience of this. Honestly, it’s been very touching.”

These new connections have not come without some surreal moments for Stamper, however.

“I kept getting tagged on Instagram with flyers for events and I was like, ‘Wait, I’m not performing there.’ But it was people inviting their friends to clubs in GTA,” she explains. “The 17-year-old cyberpunk kid that still lives inside of me from the Nineties can’t wrap her head around that. That’s the word I imagined when I was a tiny raver drinking smart drinks and thinking about what the future was like.” And now it’s a reality — even if it only exists in a digital platform.