Ric Ocasek Was a Studio Wizard to the End - Rolling Stone
×
×

Ric Ocasek, the oddball-pop wizard who died on September 15th at age 75, knew how to get the best out of a rock band in the studio. That was true when he was making one timeless radio gem after another with the Cars, and it was true when he gear-shifted into a second career as an in-demand producer in the Nineties and onward. There’s no better example of how Ocasek could make a great band even better than the three records he produced for Weezer — first their classic 1994 debut, the Blue Album, then their triumphant 2001 comeback, the Green Album, and finally 2014’s Everything Will Be Alright in the End, an alt-rock thrill ride that stands as a high point in the second half of Weezer’s catalog.

Rivers Cuomo Is Trying to Be All Right

The Strange Birth and Near Death of Weezer

In late July 2014, Ocasek was helping Weezer finish some late overdubs for that album at Los Angeles’ Village Studios. He was a low-key presence in the control room, quietly drawing in a notebook while various members of the band went through endless takes at frontman Rivers Cuomo’s direction. Every once in a while, he’d chime in with a wry remark that eased the tension. It was clear that everyone in the band looked up to him, like their cool New Wave dad.

“There’s just a chemistry there,” Cuomo told me during a break from recording. “Scott [Shriner] put it really well: Even when we know he’s on the way to the studio, we all start playing different.”

“He’s the best,” drummer Pat Wilson added. “One day as I was walking out of the studio, somebody recognized him, and I actually said, in a hushed voice, ‘I know! That’s Ric Ocasek!'”

After reuniting with the Cars for 2011’s Move Like This, Ocasek had spent a year or two at loose ends. “I was pretty much hanging in New York — doing some writing, a couple art shows,” he told me. “I wasn’t really looking for any outside work. Just kind of doing what I felt like. It’s a good time in my life to do that.”

Around the same time, Cuomo was considering possible producers for Weezer’s next album. “As we were getting more clear on the sound we wanted — basically, the sound of how we play live, but with power and fidelity — it was pretty obvious that Ric is the Number One guy for that, at least as far as Weezer goes,” Cuomo explained.

For Cuomo, Everything Will Be Alright in the End represented a new level of creative mind-meld with their on-and-off producer. “On the Blue Album, the songs had been demo’d so many times, and played at so many shows, that there wasn’t a heck of a lot left to do by the time we got into the studio with Ric,” he recalled. “And on the Green Album, I was in a very tense and closed-minded phase, and I didn’t open the door as much for input from him. Now, there’s a wider range of roles for him to play in the studio — whether he’s sitting there and being a vibe guy, doodling in his book, or picking up the guitar and suggesting a melody here and there.” 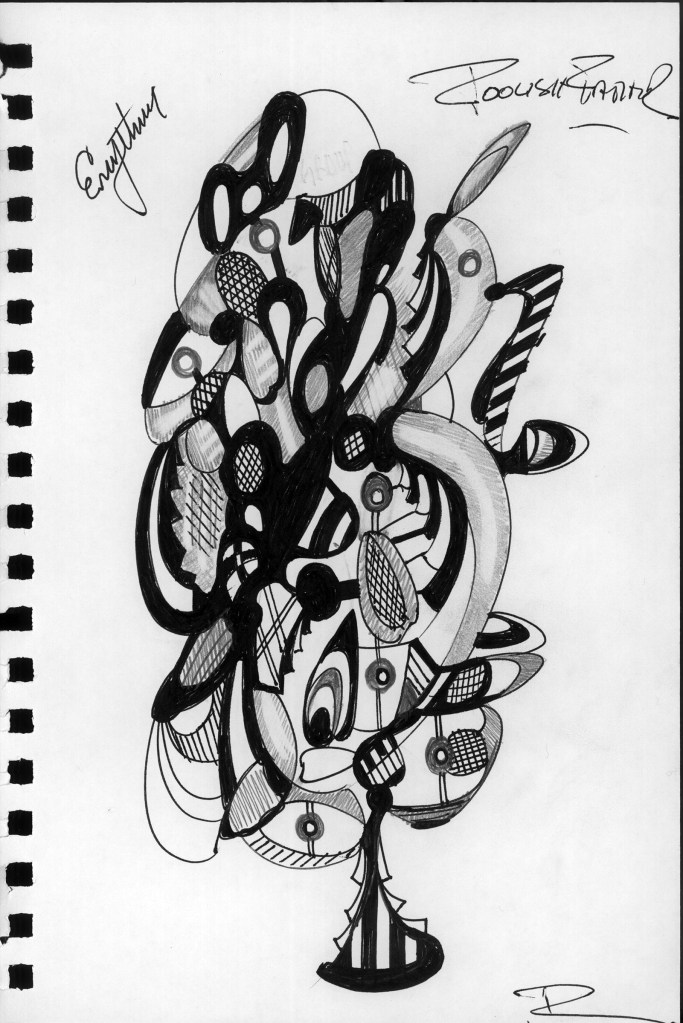 Ric Ocasek drew this pen-and-ink-original during the sessions for Weezer’s 2014 album ‘Everything Will Be Alright in the End’ at Los Angeles’ Village Studios.

Looking back on 20 years of collaboration with Weezer, Ocasek had his own observations. “The technology has changed a lot,” he said. “It was pretty much live [in 1994], and now everybody comes in with laptops and stuff. But that’s kinda cool.”

Ocasek was sitting on the floor of a hallway outside the main recording space as we talked. Just about everyone else who passed in and out of the soundproofed doors seemed moderately stressed-out — but not him. “I can really sympathize with wanting to get things the way you want,” he said. “Sometimes you have to paint the boat when you’re finished building it. And sometimes [Rivers] never wants to paint it, you know?”

He stood and headed back into the studio. “Finishing things can be difficult for some people,” he added. “I don’t know that I have that difficulty.”

Later that day, Ocasek opened his notebook to show me the drawing he’d been working on all afternoon: an abstract tangle of black ink apparently titled “Foolish Father,” after the song whose background vocals they’d been perfecting. Was it supposed to be a musical instrument? A psychedelic flower from another planet? A visual metaphor for what it’s like to work with Weezer? Ocasek was smiling as he tore out the page and handed it to me, but he wouldn’t say.