If you’re looking for indie-pop thrills this quarantined fall, you won’t find many better than the ones on My Favorite Shrine, the debut EP from New York City trio Ribbon Stage. Jamming five songs into eight minutes — the longest, “Personal Hell,” maxes out at a lean 2:21 —  the EP is all sugar-buzz hooks and aching guitars, approaching the platonic ideal of what a DIY band can do with the right mix of amateur enthusiasm and accidental pop songcraft. When it ends, you’ll want to listen again; you’ll probably listen to it a few more times after that, too, unless you have somewhere better to be right now than the blissed-out basement show in your head.

Ribbon Stage is a very new band, formed last year by three friends in New York using the punk-rock pen names of Anni Hilator (bass and lead vocals), Jolie M-A (guitar), and David Sweetie (drums). The songs on My Favorite Shrine were initially intended as a demo tape before making their way to the venerable Pacific Northwest indie label K Records, which released it as a vinyl seven-inch in its International Pop Underground series this summer. They haven’t played a single show yet, but they’ve tapped into something great.

David, 35, is the most experienced musician of the three, having spent a decade on the road as the howling frontman for some of Monterrey, Mexico’s finest punk and hardcore bands. He won fans in local scenes across the Americas with Ratas Del Vaticano and Tercer Mundo, but those bands’ heavy sounds were only part of his listening diet. “I’ve always loved indie-pop since I was a teenager,” he says. “But in my mid-twenties, I was very angry, and I couldn’t have that. I didn’t want to be cute.”

By around 2015, when he moved to New York, he’d begun to feel differently: “I didn’t want to play guitar in another band. I wanted to do something new.” 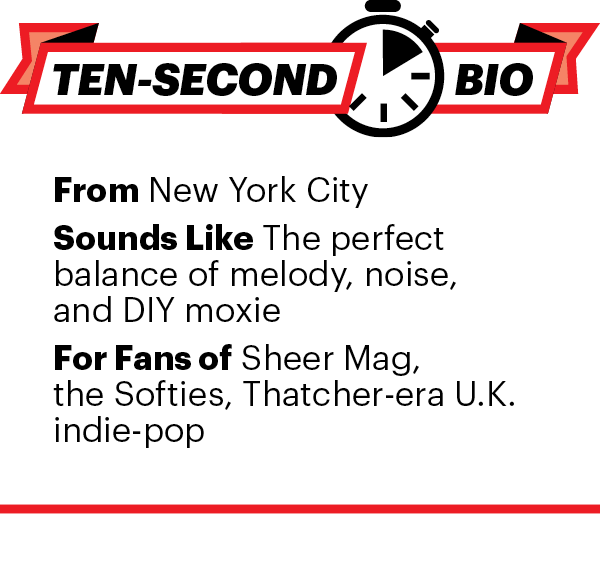 He first crossed paths with Jolie at the late, lamented Brooklyn venue Silent Barn, where she was performing with a noise band for an audience that she recalls as being “99 percent friends.” David was impressed by her stage presence all the same: “I was like, ‘Oh, my God, I need to make a band with Jolie.’”

Jolie, 28, who grew up in Miami listening to her family’s Simon and Garfunkel records (“hippie-adjacent parent music”) before moving on to Green Day, Nirvana, and Pavement, was looking for a change herself, especially after the band David saw her in at Silent Barn imploded not long afterward. “I tried to be in a pop band with punks a few times, and it didn’t quite catch,” she says. “I was pretty disheartened. I had visions of songs and melodies, but no way to articulate them.”

She and David began exchanging YouTube playlists full of indie-pop bands from the Seventies and Eighties like Dolly Mixture and the Shop Assistants. Soon they were writing songs together with David on drums and Jolie on guitar.

The final piece of the puzzle came together after Jolie got to know Anni through their work as counselors at the Willie Mae Rock Camp for Girls, where they helped children aged five to seven start their first bands. “It was just a bunch of little kids banging on the guitar strings, and it was really fun,” Jolie says. “We were like, ‘We should do this’ — even though, from a technical perspective, our skills are maybe more close to what the seven-year-olds were doing than, say, any of our friends’ bands.”

An early attempt at starting a doom-rock duo fell by the wayside after Anni heard the songs that Jolie had begun writing with David. “I was playing them for her, and I think she liked them a lot better than the music I was coming up with between the two of us,” Jolie says. “So we all hung out, got some burritos, and merged bands.”

Anni, a 24-year-old Bay Area native with a background in furniture design, had never been in a real band before Ribbon Stage, but she quickly took to the lead-singer role in the new trio, writing most of the lyrics on the EP with a natural heartbreak-queen flair. “There was a lot of teen-diary inspiration, for sure,” she says. “We just riffed together so well.”

They recorded My Favorite Shrine last December on a 4-track tape deck in what Jolie recalls as “a windowless room in Bushwick.” Right away, it was clear that something magical was happening. “David has a really deep foundation of musical knowledge, and then there’s me, someone who’s obsessed with music but has literally no idea how to play, and Anni, who has a beautiful voice,” Jolie says. “You put that all together, and it’s scrappy without being bad.”

Jolie found Ribbon Stage’s name while googling cooking terms (“I didn’t like it, but they outvoted me,” she says). Anni used her visual-art training to design the EP’s pink-and-black cover, hand-drawing the lettering and the twee-horror images of flowers, ballet shoes, candles, and spiders. “We spent a long time making sure that it wasn’t too cute or too gnarly,” Jolie says. “It’s not just music, it’s accessories for your teenage bedroom.”

Since releasing My Favorite Shrine as a limited self-pressed cassette and a more widely distributed seven-inch through K, the band has been pleased to find that other people enjoy their music as much as they do. “I never share anything I do with my family members, but I felt like maybe this was universally likable enough to not totally humiliate myself,” Jolie says. “They were like, ‘Wow!’ They couldn’t believe it was so good. I was like, ‘Yeah, why would I make something bad?’”

The three musicians have been stranded separately by the pandemic — when we spoke over Zoom, Jolie was laying low in Olympia, Washington, while David and Anni were in Brooklyn and Queens — but they hope to gather and record Ribbon Stage’s first LP soon. “I have about seven songs written so far,” Jolie says. “I’ve been practicing the whole quarantine, and I feel really ready. … I’m playing the same seven songs on my little guitar, using the same five chords that I use, and I can’t wait to get Anni and David on them and make them into something completely different.”