Fats Domino was never a typical rock & roll star. On the road, he packed a hot plate and packages of rice and beans so he could cook his favorite meals in hotels. He stayed married to the same woman for more than 60 years. And he downplayed rock & roll’s wild side. After riots broke out at two of his concerts in 1956, he told a reporter, “I never would use dirty lyrics. And I don’t use body movements either. I just play the piano, or I sing and clap my hands.”

Yet Domino, who died on October 24th in Harvey, Louisiana, at age 89 of natural causes, was a quietly volcanic founding father of rock & roll. His early classics like “Blueberry Hill,” “I’m Walkin’ ” and “Ain’t That a Shame” featured an infectious blend of Dixieland rhythms, his charming, Creole-flecked voice, and what his peer Dion DiMucci calls “the rolling sound of his fingers on the piano.” During the first wave of rock & roll in the Fifties, he was second only to Elvis Presley in record sales. Domino was among the first acts inducted into the Rock and Roll Hall of Fame, in 1986. During his induction speech, Billy Joel said, “Traditionally, when people think of rock & roll, they think of the guitar. I want to thank the man who proved that the piano was a rock & roll instrument.”

Domino’s ebullient recordings went on to become standards; John Lennon once recalled hearing “Ain’t That a Shame” as a teenager. “It was the first song I could accompany myself on,” he said in 1975. “It has a lot of memories for me.” Bonnie Raitt says, “Something about his voice was so engaging and sweet, and I loved the way his accent crept into his words. And when I saw photos of him, you couldn’t not fall in love with him.”

Born Antoine Dominique Domino Jr. on February 26th, 1928, Domino grew up in – and never really left – the Lower 9th Ward in New Orleans. A fan of big-band swing, he was already gigging in local honky-tonks and bars by the time he was a teenager. At 14, he dropped out of high school, taking jobs like working at a bedspring factory as a way to supplement his music. He began playing piano in local bandleader Billy Diamond’s band, where he earned the nickname “Fats,” partly in homage to piano predecessors like Fats Waller. At one of those gigs, he met jazz bandleader Dave Bartholomew and Imperial Records head Lew Chudd. Bartholomew’s son Ron recalls his dad saying he “knew Fats was a star – even his diction, the way he pronounced words, was unique.” Domino signed a record deal that same night, and he and Bartholomew co-wrote 1949’s “The Fat Man” – a rewrite of a New Orleans standard – which became an R&B hit and one of the earliest rock & roll records. It was the beginning of a long partnership, which often involved Bartholomew harnessing Domino’s talent. “Fats was much more playful, a fun type of guy,” says Ron. “But my dad would say, ‘You’re only as good as your next hit record.’ ” The two teamed up again for 1955’s “Ain’t That a Shame,” a powerful song full of rhythmic punches and Domino’s easy vocal charm. It became a national Top 10 hit. “It don’t have no bridge to it, no middle,” Dave Bartholomew said. “It’s the same sentence over and over again. But we sold it with the music.”

“He kept it very simple,” the late Allen Toussaint told Rolling Stone in 2007. “He would start a pattern right from the beginning and it would last throughout the song, so if you liked the first two bars, you would like everything. He never fixed what wasn’t broken. Before Fats, people played triplets in the upper register, and it was a timid kind of sound. When Fats played triplets in the lower register, there was nothing timid about it. No way.”

Almost immediately, there were imitators. Pat Boone recorded a remake of “Ain’t That a Shame,” which Keith Richards called “so shallow and produced, and Fats’ was just so natural.” Still, Boone’s version received more airplay. The incident was just one example of the racism Domino experienced throughout his career. In the Fifties, his group often had to drive hours before finding a hotel that would accept black customers. When Domino attended the premiere of 1956’s The Girl Can’t Help It, the highly influential early rock film he appeared in, he wasn’t allowed to sit with the other VIPs. “He’s the star of the film, and he had to sit upstairs at the premiere!” said Joe Lauro, who directed 2016’s Fats Domino and the Birth of Rock & Roll. Domino didn’t complain about those injustices, at least publicly. “I just stick to my music,” he said in 1968, when asked about the civil-rights movement. 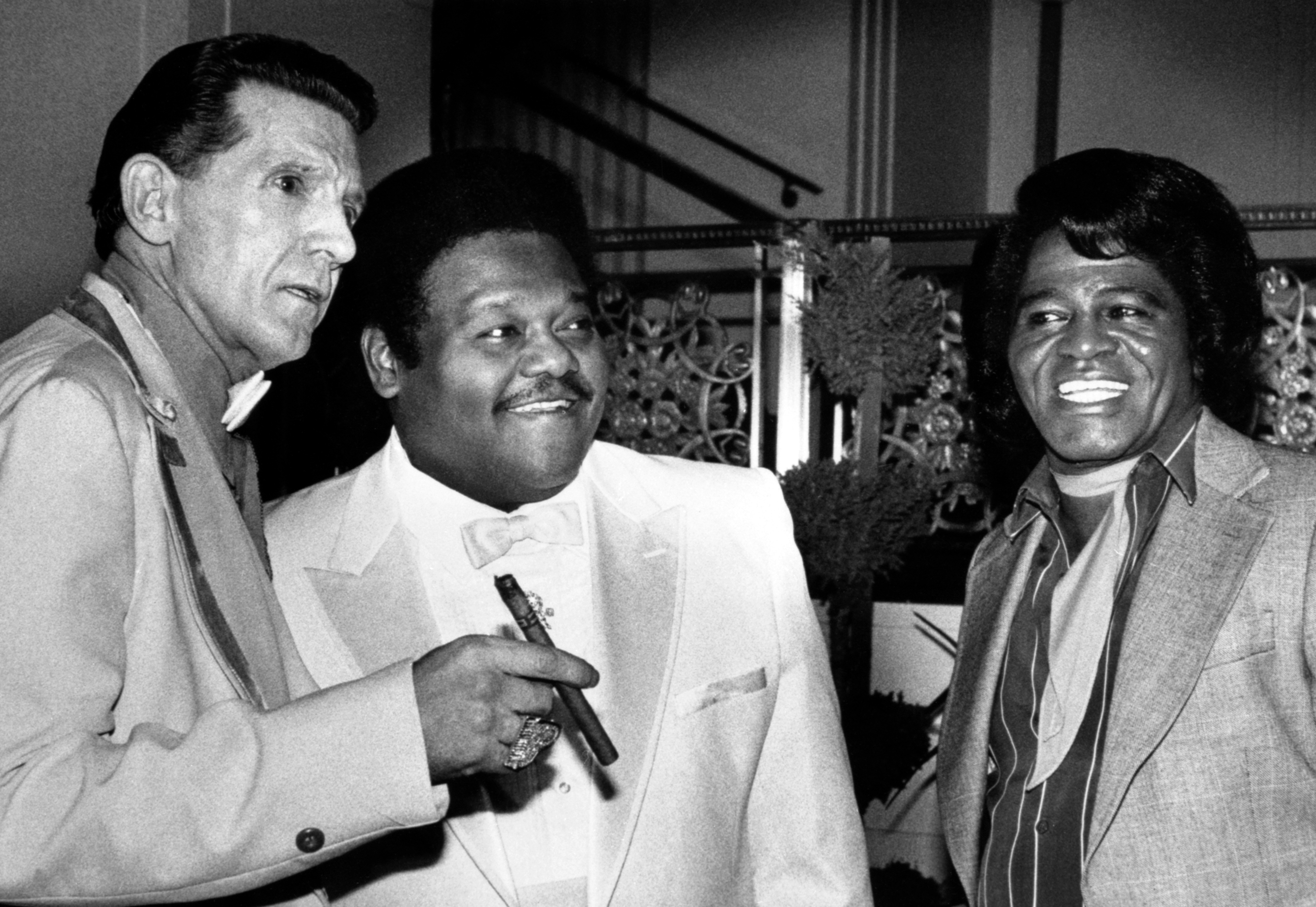 Domino’s signature hit was 1956’s “Blueberry Hill,” a remake of a song first cut by Gene Autry. “Fats was the perfect cat to do ‘Blueberry Hill,’ ” says Jerry Lee Lewis. “His vocals were phenomenal, and he was a great pianist – he had the best raw talent.” Lewis, like his fellow rock & roll innovators, envied Domino’s swagger: “He had a huge entourage. We talked cars all the time, and we both loved Rolls-Royces. Jewelry, nice suits – we had a lot of similar interests, come to think of it.”

“He influenced me as an entertainer, period,” says Little Richard. “When I was a boy in Macon, Georgia, Fats used to come there. I didn’t have the money to go see him, so I used to try and sneak in, because I loved him. He was just a little, short guy with little-bitty hands, and he could make a piano talk.”

Domino’s last Top 10 hit, “Walking to New Orleans,” came in 1960, and his career slowed down. But soon, a new generation of artists began touting him as an influence. Paul McCartney channeled his style for “Lady Madonna”; Randy Newman arranged the horns for Domino’s 1969 cover of Newman’s “Have You Seen My Baby?” The Band paid homage with a cover of “I’m Ready” for 1973’s Moondog Matinee; Robbie Robertson remembers seeing him live as a 14-year-old: “He wore a pink suit and had a smile as wide as his piano. When he kicked into ‘I’m Walkin’,’ he set the place on fire, and I couldn’t breathe. The sound, the groove, the power coming from this five-foot-five bundle of rollicking New Orleans joy killed.”

In the Sixties and Seventies, while Chuck Berry experimented with psychedelia and Jerry Lee went country, Domino never changed his sound. That also applied to his live shows: “Fats made sure those arrangements were played,” said Lauro. “He did not take a pickup band on the road. When you saw Fats Domino, until the last show, you could close your eyes and it would be like being in a joint in 1955. It was ageless.”

The responsibility of keeping that large touring operation together led Domino to retire in 1996. He made headlines in 2005 when Hurricane Katrina obliterated his neighborhood. Domino was reported missing for days until he and his family were rescued on his roof. Though his home was destroyed, Domino was typically nonchalant about it. “I ain’t missin’ nothin’,” he said afterward. “Just one thing that happened, I guess.”

After Katrina, Domino started working again. In 2006, he released Alive and Kickin’, which became one of his most acclaimed works. Rolling Stone caught up with him around that time at his new home. Still dapper in captain’s hat and patent-leather shoes, he showed writer Charles M. Young how he would cook red beans in his bathroom, so he didn’t make a mess for his wife, Rosemary. He was also still playing down his accomplishments. Asked about the often riotous response he received in concert, he said, “It wasn’t anything in the music, so it must have been something in the audience.”