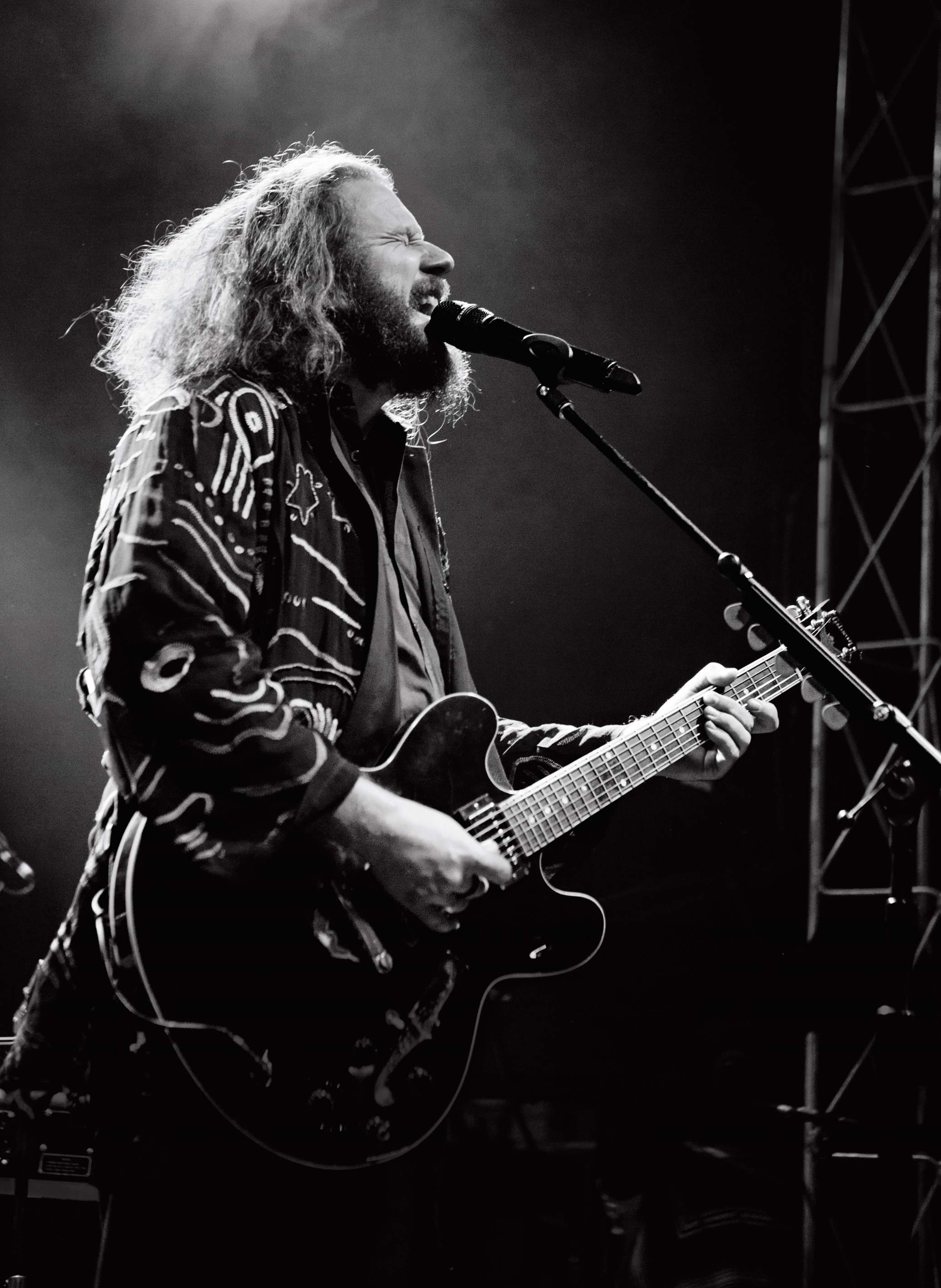 It was almost too good to last: In October 2013, My Morning Jacket gathered to record their seventh album, in a hilltop mansion in Stinson Beach, the Northern California town where Jerry Garcia lived for years. The band would record during the day, then cook dinner together and walk on the beach, sometimes sharing a vaporizer pen. “There was nobody for miles and miles, like a deserted paradise,” says frontman Jim James. “At night, it was like you were inside the sky, the stars right next to your head.”

Then, one day, James was moving an amp when he felt a sharp pain shoot through his back. “All of a sudden I was in bed, just in agony,” he says. He would have surgery for a herniated disc and spend the next two months recovering. When the band reconvened in Stinson Beach, James often had to cancel sessions, sometimes recording as he lay on a couch. “He was definitely struggling,” says keyboardist Bo Koster.

How the Newport Folk Festival Got Its Groove Back

Somehow, James managed to channel the turmoil into dozens of new songs. “Something special was flowing out of him,” says Koster. “It felt like stuff was just spilling out.” The result was The Waterfall, which the band says is the first of two My Morning Jacket albums to come in the next year. The title “is a metaphor for how life is constantly beating you down, and you really have to take time to stop it and get through,” says James. One of the songs, the desperate rocker “Big Decisions,” is about why people don’t change what makes them unhappy. (James says it was partly about “sitting at lunch with friends for the umpteenth time, going, ‘Oh, God, I fucking hate this thing’ — like touring.”) Other tracks — such as the smoky, falsetto-heavy finale, “Only Memories Remain,” and the acoustic “Get the Point,” where James sings flatly, “I think our love is done” — deal with the end of a relationship.

“They are influenced by specific situations, but I’d rather not talk about it, because I want love in my life,” says James. “In recent years, I’ve been trying to figure out, ‘What have I done wrong in every relationship I’ve been in until now?’ and tried to make them better.”

Sitting on the porch overlooking a river at La La Land studios in the band’s hometown of Louisville, Kentucky, James calls his latest health incident the result of years of “being unkind to my body” — too much touring, too much partying. “It creates this vicious cycle.” (He credits meditation and Pilates for his ongoing recovery.)

The band took a break at the end of 2013, after a summer tour with Bob Dylan and Wilco that ended up being a mixed bag. “It was pitched to us like, ‘There are gonna be lots of collaborations, and Bob wants to play with you guys,’ ” says guitarist Carl Broemel. “That didn’t happen.” The highlight was playing with Bob Weir, who was on the bill for some dates, and who joined them on Dead staples like “I Know You Rider” and “Brown-Eyed Women.” “He was so open to talking, the kind of things we were hoping Dylan would be,” says James. “Having him there was like this great gift.” Adds Weir, “I had a lot of fun playing with those guys. They’re a very, very good band.”

James kept going during the group’s hiatus, jumping straight into a tour behind his solo album Regions of Light and Sound of God, then heading to L.A. to join the New Basement Tapes project, writing songs with Elvis Costello and Marcus Mumford (“That was magic,” says James). “He had the solo tour right on the heels of maybe two and a half years of touring on Circuital,” says Broemel. “We were really tired, and he was hitting it harder than ever.”

After recording live and straight-to-tape on Circuital, the band took a more modern approach on The Waterfall, entering the studio with dozens of song fragments and often stringing them together digitally, resulting in sprawling, dark tracks like “In Its Infancy (the Waterfall)” and “Spring (Among the Living).” The latter is a dissonant epic that the band recorded before James, on his laptop, turned it into a sound collage with overlapping sections. “We had never done anything like that before,” says Broemel. Adds drummer Patrick Hallahan, “It got mixed reactions because it didn’t happen organically. Then I started hearing it a different way.”

This summer, the band will hit the road, switching between multinight runs at large theaters and festivals like Bonnaroo and Governors Ball. Despite being one of the most popular touring groups on the road, My Morning Jacket still feel like music-business outsiders. “Having a hit would be awesome, but I don’t know if it’s meant to happen,” says James. He calls pop radio “such a waste of time” and has even harsher words for nearby Nashville: “I feel like modern country is deliberately dumbing down the human race. They’re deliberately making people take glory in being uneducated and racist, and it’s just sad. I think it’s absolute mind control.”

That night, the bandmates play the new album in its entirety for a small crowd of friends and family at Louisville’s Headliners Music Hall, where they last played in 2003. The band feels out the possibilities of new songs “Compound Fracture,” a synth stomper with a hint of T. Rex, and the psychedelic, tribal “Like a River.” During “Only Memories Remain,” James starts playing a winding arpeggio riff, and the band latches on. “We’ve developed this connection where someone will do something and four heads will turn and start to play it with you,” says Koster. “But it’s frustrating when people call us a ‘jam band’ — there’s none of that noodling.” For the encore, the band reaches all the way back to 2001’s At Dawn, and James reminisces about the time he was kicked out of the venue for being “super fucked up” during a Wilco show. “It’s such a trip to play here,” he says. “I’m so proud.”