When Rema thinks about the past two years of his life, a time in which he’s rocketed from Benin City, Nigeria, to global stardom, he’s reminded of the biblical story of David. “He took care of the sheeps,” says the 19-year-old rapper and singer, citing the way he’s tried to provide for the other artists in his hometown. “On the fateful day David went to give food to his brothers and he saw Goliath, that was the same way I fought through all my struggles.” 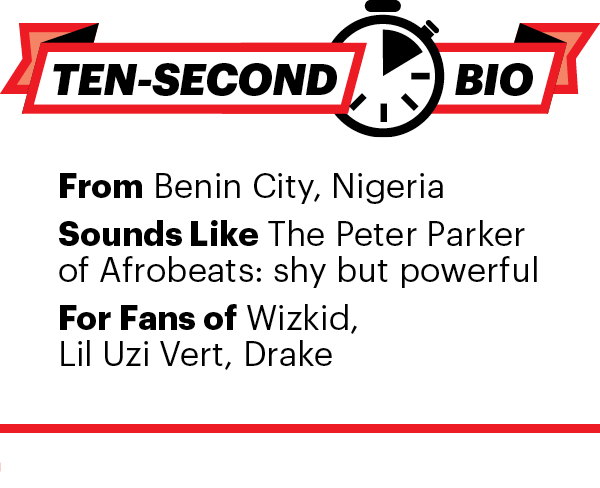 It started in 2018, when Rema — real name Divine Ikubor — recorded a viral freestyle over “Gucci Gang,” a local hit by Nigerian artist D’Prince. Sitting in a car, wearing a maroon jacket, the self-proclaimed “modern-world David” delivered a sequence of rapid bars, punctuated by spurts of melody, that’s since been viewed nearly 500,000 times on Instagram.

Soon, he had a string of hits that have made him one of the most exciting acts in the ascendent Afrobeats genre, with a signature sound that combines comic-book references, horny longing, teenage jealousy, trap beats, and melodic avalanches. It’s a blend that’s caught the attention of everyone from Drake’s manager, Oliver El-Khatib, to Barack Obama, who put Rema’s irresistibly catchy “Iron Man” on his 2019 Summer Playlist. “It was amazing being the only Nigerian artist there. I don’t know anybody in the White House or in the American government,” Rema says in disbelief. “How did my music walk so far to his doorstep?”

Rema grew up in a family of six in Benin City, the capital of Nigeria’s Edo state. “It’s an ancient city,” he says. “It’s still deep in culture, very deep, traditional.” At its founding centuries ago, he says, “Nigeria was not a country, but we had a kingdom. We had a movement.”

He first got into music at his hometown’s Christ of Mercy church, where he was installed as a youth leader for a program called “Rap Nation” that taught kids how to rap for the congregation. “If I look back, I wasn’t really that good,” he says. In 2008, Rema’s father died; seven years later, so did Rema’s brother. The financial hardship those losses placed on him, his mother, and two sisters led to a yearlong move to Ghana. “No money was coming in,” he says. “We were hungry. I was the only man in the house. I had to do something.”

He returned to Benin City a changed man, drawing on the secular influences he’d absorbed during his year in Ghana:  “When I took that break I saw life — like, real life.” The day after his “Gucci Gang” freestyle, he received a call from D’Prince, who invited him to Lagos, Nigeria, and offered him a record deal. Rema moved there the next day. “I was like, ‘This is my only chance,’” he says. “I had to prove myself.  At that time, I had no Afrobeats songs — strictly hip-hop, strictly trap. D’Prince started pitching some Afrobeats to me, and I started vibing.”

Even as his career keeps growing — his biggest hit, the bubbly, melodic “Dumebi,” has more than 20 million streams on Spotify — Rema is still adjusting to his newfound fame and wealth. “I still do my best to try and stay away from people,” Rema says. “I can’t just walk in and say hi to everybody. It’s not because I’m proud. It’s because I’m shy. I have a lot inside me, but sometimes I can’t actually speak.”