1. Fernando A. Flores, Death to the Bullshit Artists of South Texas (Host Publications). After reading the 10 singular tales in this book, Flores’ first, I have no idea who the bullshit artists of South Texas are. The characters in these stories about people in the punk scenes of the Rio Grande Valley, or people on their margins, or people who pass through on their way to somewhere else, are drawn with affection and wonder, as if every time Flores came up with a musician — the members of “The House Band for the Hotel Cuerpo de la Paz” or “Pinbag” or “Bread8,” or “The Lead Singer for the Short-Lived Band ERIKKKLAPTON” — you can feel him saying, OK, now who is this really? and then pushing until he and you find out. 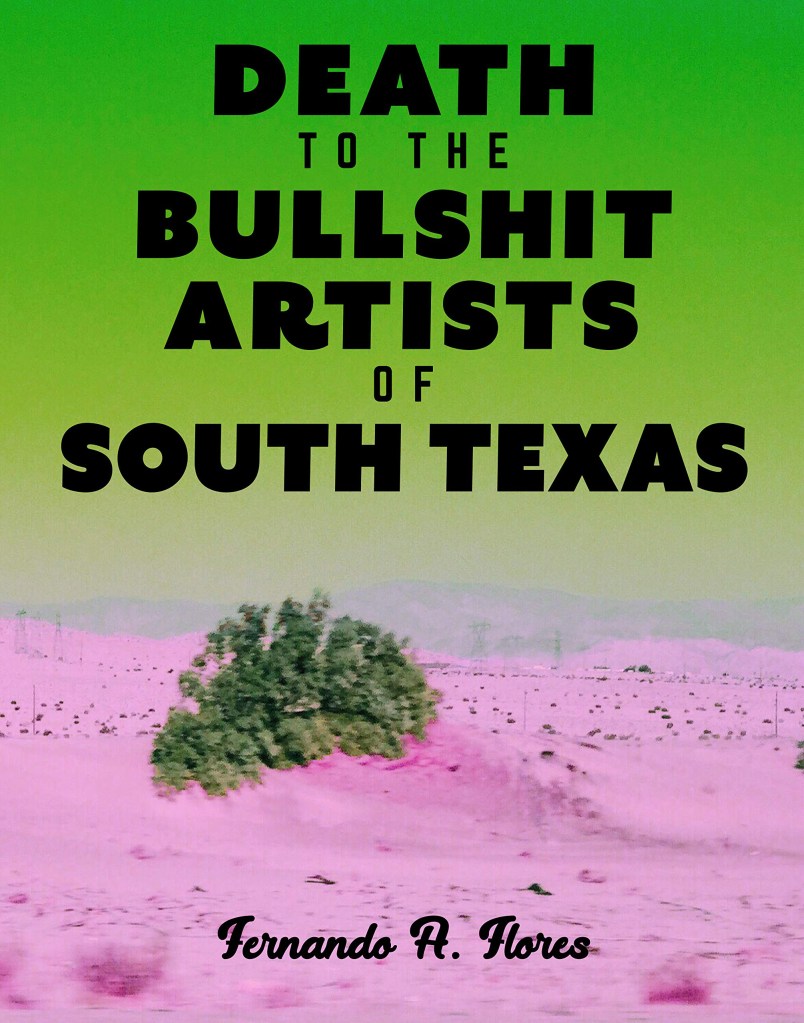 This isn’t the typical rock novel, which is fundamentally no different from Behind the Music — and I do miss that absolutely addictive show, probably because it was as formulaic as any program in the history of television. Flores creates a milieu of 100 self-made EPs run off at a copy shop, most of which end up in nobody’s hands, of audiences of 10 or 15, of bands you can’t be sure even the people who were in them remember. The drama, again and again, is a moment of discovery, when a person finds his or her nascent, hidden gift. It’s an epiphany of self-realization, or a sudden need to write five songs a day for two weeks, real songs, good songs that other people want to play, and Flores can let you hear them — almost alone among writers making up bands to write about, when Flores puts the lyrics he’s made up for Pinbag or Bread8 on the page they read like something people would actually sing. That the revelation fades, that people who for a brief time put something new into the world — one of Flores’ titles, and fundamental ideas, is “The First-Ever Punk Band in the World (Out of Raymondville)” — go back to the alcoholics and layabouts they always were, takes nothing away from their accomplishments, which glow on the page, making you wish you’d been there. Sometimes Flores does this simply; sometimes he pulls out all the stops, and you might gasp, wanting to believe it all happened just like this, Bobby Lou on guitar, Sandy on the drums:

It was past midnight when they got back to the house, and neither Beth nor Fizzcakes were around. Sandy and Bobby Lou got behind the same instruments and summoned a sandstorm from a secret 1002nd Arabian Nights tale — an old wine bottle fell from the sill, rolled on the ground, hit the bass amp, and when the cork popped off it released a mob of cheering fans taking pictures and yelling their names, quickly turning into protesters waving picket signs, men on megaphones calling them sluts, and Molotov cocktails waiting to be ignited — it became clear that they were here for Sandy and Bobby Lou, the world was out of balance and the mob had chosen them to be burned at the stake for their false greater good.

3. Jon Bream, “Cyndi Lauper has fun while Rod Stewart coasts at St. Paul concert,” Minneapolis Star-Tribune (October 16th). “His biggest misstep was including a video clip of him being knighted in 2016 by Prince William along with footage and headlines of World War II warriors while he crooned 1991’s ‘Rhythm of My Heart.’ What war did Sir Rod serve in? The British Invasion?”

4. Women Who Rock: Bessie to Beyoncé. Girl Groups to Riot Grrrl, edited by Evelyn McDonnell (Black Dog & Leventhal). An oversize book with 103 essays-with-new-paintings-or-drawings of individuals and a few groups (i.e., June Milligton but not Fanny), and with that a who’s-in-who’s-out is inevitable. Joan Baez but not the Shangri-Las? Fiona Apple and not Kleenex? Anybody but not the Slits? For that matter, June Millington and not Etta James? But the problem is the conventionality of the writing, by 34 different women — and the artwork, by five women, plus Grace Slick’s self-portrait, which ranges from flat (Janelle Monáe by Winnie T. Frick won’t tell you anything the photo it’s based on doesn’t) to impenetrable: for Sleater-Kinney, by Anne Muntges, Carrie Brownstein looks like — who knows. The only way you can tell which woman is which is by a process of elimination, and even then you’re not sure if the band kicked someone out and brought in somebody else.

This isn’t exactly a missed chance. At $35 for more than 400 pages, it’s a gift that could make a difference in a lot of lives. But there’s something too finished, too sunny, too you-can-make-it-if-you-try here, a feeling that makes even the entry on Amy Winehouse feel like a success story.

5. Fred W. McDarrah, New York Scenes (Abrams). McDarrah (1926-2007) from 1950 to 1980, and with a warm but frank introduction by the historian Sean Wilentz (“I never saw her again, and a few years later she died, a casualty of the counterculture,” he says of a 16-year-old first cousin, glimpsed here dancing at a gathering in Central Park in 1967. “So thinking about that whole part of the Sixties still makes me ache and still makes me mad”) that the work of the longtime Village Voice photographer rarely lives up to. 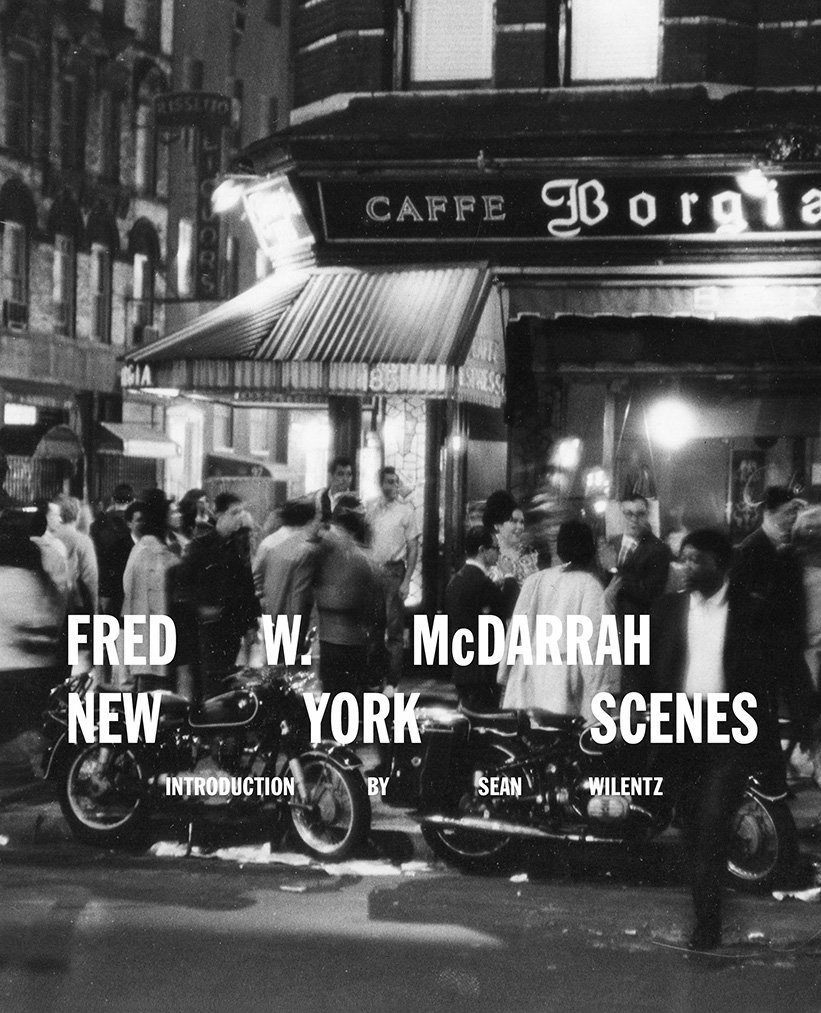 6. black-ish, “Purple Rain” (ABC, November 13th). The series creator Kenya Barris came up with the idea, but Anthony Anderson as Dre seems on top of this from the beginning — 12-year-old twins Jack and Diane have no idea who Prince was — to end, when after family members re-create Prince videos with utter shamelessness, Anderson picks up a lap keyboard and begins to pick out “Nothing Compares to U.” The twins want to know why they’re doing Sinéad O’Connor (they’ve heard of her and not him?), and within a moment each member of the family sings a line as if it’s a personal memory. It’s sentimental, but it’s theirs, as the videos are not. It’s right up there with the “Tiny Dancer” scene in Almost Famous. Is Diana Ross next?

7-8-9. Elvis Costello and the Imposters, Look Now, with “Regarde maintenant” EP (Concord), and at Northrop Auditorium, University of Minnesota (November 15th). Look Now is 12 songs baked in a cake. Even with a 14-piece string section on the last track, the four songs on the EP that comes with the expanded edition aren’t burdened by the curlicues and sprinkles of the album numbers. The gem of the entire enterprise, from the EP, is “The Final Mrs. Curtain.” A gauzy, disorienting melody leads you into a story that takes place somewhere in the half-worlds of, say, Cole Porter’s “Miss Otis Regrets” and Costello’s own “Sleep of the Just” and “My Dark Life.” It’s not altogether clear who the murderer is, or the victim, or how many there are. The mood isn’t menacing. It’s not any kind of satire, but an untangling of the pun in the title as if it were a clue — to some other mystery, maybe.

Despite a request, Costello didn’t play the tune in Minneapolis. For a crowd of more than 2,500 where it was hard to spot anyone under 40, he opened with a harsh “This Year’s Girl” that couldn’t break through the echoey, muddy sound; brought songs from Look Now down to earth, and ended the 11-song encore set with “(What’s So Funny ’Bout) Peace, Love and Understanding”. The performance I’ll keep thinking about was “Deep Dark Truthful Mirror,” which turned into the kind of epic “I Want You” once was: a performance that can come back and trip you up, change your day, invading your memory without warning, and a song that, as a performance, felt as if it could go on forever without exhausting what it had to say. I have no idea how long the song was this night — six minutes? Ten? — but it dwarfed everything else Costello played. As it went on, his voice got bigger, then seemed to double in reach, range, intensity and desire — desire for the song itself, desire for the mirror to reveal all his secrets, or all of yours. It wasn’t a scary prospect. When the song did end, it felt as if he should have gone right into part two.

10. “Suspicious package reported at Duke Energy building in Charlotte,” FOX 46 / WJZY newsbreak, Charlotte, North Carolina (October 31st). Just five days after the arrest of Cesar Sayoc for mailing pipe bombs to Democrats and critics of Donald Trump, with no certainty about what might still be on its way: “Reports of a suspicious package Tuesday morning prompted evacuations and road closures in uptown Charlotte. The package ended up being a Journey cassette tape, police said.”

Thanks to Andrew Hamlin and Cecily Marcus