When Mia Berrin first began performing as Pom Pom Squad around 2017, audience members would approach her after shows and admit that they’d been surprised by how much they’d enjoyed themselves.

“More than once, someone came up to me and was like, ‘I expected to hate you,’” she says, laughing it off, from her Bushwick, Brooklyn apartment. “Or the other one, especially from dudes, was often ‘I thought you guys were going to be a cute girl band.’”

Instead, Berrin was playing gnarly, grunge-y punk rock while presenting herself in high-femme style, often wearing a full high-school cheerleader pastiche that she still favors. When she puts on that uniform, she’s aware of all the expectations that come along with the visual stereotype.

With Pom Pom Squad’s full-length debut, Death of a Cheerleader, Berrin, 23, continues to evolve the character she’s playing. She twists the femininity she embodies, and all the still-healing adolescent feelings, emotional baggage, and identity crises that come with it, to create a beautifully raw punk record.

“The album title was an attempt for me to kill off an idea of femininity that I was acting out for other people — the version of the cheerleader that was me hiding inside a cloak of conventional femininity that’s not a one-size-fits-all,” she says. “It certainly wasn’t a size that fit me.”

During her childhood in Orlando, Berrin tried on many roles. She was a quiet kid, “constantly smiling” in her younger years, and pleased to “hang back” behind her more outgoing older siblings. She loved listening to music, often sneaking onto her mom’s iPod and shuffling through the Beatles, Norah Jones, and Natasha Bedingfield. Her parents didn’t hear her sing until she was nine or ten, when Berrin joined a youth choir. 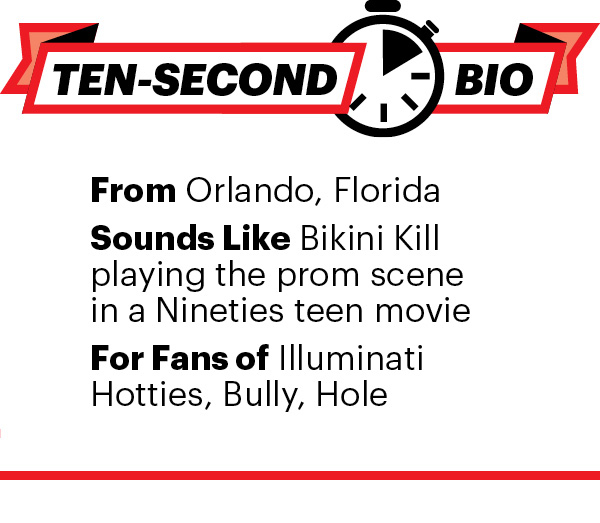 In the years that followed, she began to imagine a future where she could become an artist — any kind, really. Acting was her priority at the time, but she also drew and kept a journal. Privately, she’d record demos of herself singing with her acoustic guitar. Slowly, she gained the confidence to cover songs in Orlando’s open-mic scene, which she sums up as “buckwild.”

“They were, like, a white dad in flip-flops, singing an acoustic cover of ‘Get Low,’” she colorfully recalls. “Then there were folk-punk people that would busk on the street. That became my introduction to performing in front of an audience.”

Berrin was solo at the time; until she was near the end of high school, the notion of joining a band seemed foreign to her, like something “braver people, whiter people, or dudes did.”

By this point, Berrin says, she was beginning to develop into “an angry kid.” Queer and mixed (she is half-black and half-Puerto Rican), she felt alone in the predominantly white, Christian, heteronormative “semi-South” where she grew up.

“I think when you’re growing up, you learn a little bit about cruelty and the ability to be cruel,” she says. “It was just so hard to believe, and it was hard to understand. I didn’t know what to do with that or how to deal with that.”

Her parents were on the younger side, so Berrin grew up consuming a high dosage of 2000s pop-culture staples. When she entered high school, it felt like a “self-fulfilling prophecy” of all the movies and teen shows she was raised on as a kid. But because those teens rarely looked like her, she felt the need to conform. In the public high school she first attended, Berrin was severely bullied, eventually leading to her leaving and being home schooled for a while. “That hadn’t been like anything I’d seen on TV,” she says. “It was a huge shock.”

Her parents were scared for her safety and settled on a private school in town for her to attend. It was a “super-sanitized” one-eighty from her previous school, with a heavy veneer of privilege. As a young woman of color, she tried to fit in with a version of “girl next door,” Seventeen magazine whiteness, dying her hair a lighter brown and drawing on freckles. Still, her peers cruelly never let her forget she was not like them. One student did a pencil test to compare Berrin’s less-limp hair texture to their own and show that they were not the same.

Some of her efforts toward conformity did protect her for a bit. “I was embraced by this popular group of girls, but I took myself out of the group,” she recalls. “There was one instance where we were were getting ready and I was staring at myself and them in the mirror, and I just felt like there was something completely wrong with me.”

Liv.e Is Ready for Her Rebirth

Berrin was a high school senior when she created Pom Pom Squad in her childhood bedroom. She had been accepted to the acting program at New York University and was using music to quell her pre-college anxiety. The first song she wrote that she liked was “Lux,” which appears on Death of a Cheerleader. She recorded a demo and put it out during her first week of college. The act of bravery paid off, with the song getting played on Brooklyn satellite radio.

“It was shocking and bizarre to me that this thing I made in my bedroom was getting attention in that way,” she says, still sounding amazed.

College came with new challenges. “The culture of acting is very much, ‘Be easy to work with and make yourself a blank slate,’” she says. She still didn’t feel settled in her identity or what she wanted out of life for herself; she wanted to explore who she was. It wasn’t until she discovered Rookie Mag, riot grrrl, and feminism that Berrin began to find the answer.

“[Rookie] was my first exposure to teenagers who lived any other way,” she says. “It really informs everything I do in life.”

Her musical role models — Bikini Kill, Hole, Heavens to Betsy, and Bratmobile, among them — helped her channel the anger that had been simmering inside for years. She canceled her Seventeen subscription and started exploring alternative ways of dressing, like dying her hair green to the chagrin of one of her acting teachers.

“Seeing women screaming and being angry and messy and open and saying things that were ‘ugly’ or controversial or whatever…I felt so represented in an emotional sense,” she says. “It felt like suddenly somebody let me off the leash.”

Pom Pom Squad developed quickly from there. The dream of having a band of her own was still unformed until Berrin met Spencer Peppet of the Ophelias, whose band was the first group Berrin personally knew to feature all female-identifying musicians; Peppet became a good friend and a key collaborator, and appears on several songs on Death of a Cheerleader. (The Ophelias have since ditched the “all-women” descriptor they used at the time, since they have trans and non-binary members.)

Berrin was still finding her footing in acting school, but it seemed like the connections she was making at NYU were pushing her more towards music. While appearing in a short film’s “apartment party scene,” Berrin met two men who offered to produce an EP for her. She lied to them about having written an EP, so she rushed home to actually get one going, finding the self-imposed deadline exhilarating. But in the studio, doubt creeped in. She realized that she had been working alone for so long that she had no idea how to express her music taste or intention to another person.

“I felt like it was being pointed out to me how embarrassing I should feel about how little I knew,” Berrin says. The experience felt so belittling that she vowed to never be put in that position again. Acting school had grown frustrating, and she thankfully had enough material to transfer to a music program at NYU so she could learn how to do everything herself.

At Pom Pom Squad’s live shows, Berrin began to access the “most vulnerable, brave version” of herself. Drawing inspiration from Courtney Love, she learned to dress in the “super femme” way she wanted to express herself. Berrin studied and embraced the contradictions of embodying a cheerleader: On one hand, she says, pop culture images of this type are often the “biggest, most intimidating person at a school,” but on the other, they’re seen as “the dumb bimbo.” On yet a third hand, she adds, “I think lately there’s been a re-interpretation of [cheerleaders] as strong athletes and complicated figures.”

As a queer person, Berrin was also fascinated by cheerleaders from the perspective of desire and attraction, and the sometimes intertwined desires to be somebody and be with them.

Berrin’s queerness, and the first relationship that helped her understand it, became a huge inspiration for Death of a Cheerleader, which she recorded with a permanent line-up of bandmates that she is proud to have solidified. She completed the album over the last two years (which included her final semesters at NYU), and says the “inciting incident” for many of the songs was falling in in love with somebody who taught her “a lot about my queerness and the space that it occupies inside of me.”

For Berrin, Pom Pom Squad’s debut reflects the ongoing process of coming into her own and letting go of the expectations placed upon her. In some ways, it’s bringing her back to the joy she had as a kid.

“It’s always going to be ongoing,” she says. “But one of the reasons that the band matters to me so much is it became the thing that pushed me to really learn more about myself.”