Polo G has a record deal, a hit song, and two critically acclaimed albums, but he considers one of his greatest accomplishments to be simply making it to age 21. Surviving a violent childhood in Chicago is a persistent theme across the versatile rapper’s catalog. “You can be as young as 14, living life like a grown man,” he says. “I had to mature quickly growing up in the trenches.”

Polo, who began rapping three years ago in his late teens, has already begun to define his city’s sound. Chicago is known for drill music, a brutal hip-hop offshoot that attempts to capture what it’s like to be young in a dangerous city. After the birth of the Chicago drill scene in 2012, the subgenre began to expand far beyond its local roots into other cities and even internationally. While artists like Chief Keef, Lil Durk, and more were inspiring a new generation of rappers everywhere, they were doing the same for rappers from their city, like Polo G. “Being from the city, you saw artists grow from the first music they put out to where they are now,” says the rapper, who is now 21. “That’s inspirational, just seeing the come-up of a lot of different artists.”

Polo is part of a new vanguard that’s moving away from drill’s harsh origins; he favors freewheeling melodies and a vulnerable writing style that plumbs regret and sadness as often as anger or menace. He followed his 2018 breakthrough, “Finer Things” (“A lot of people dyin’ and it’s a chance that you might/You got God on your side, but it’s hard to do right”), and his 2019 hit “Pop Out” with Die a Legend, one of the most assured album debuts in recent memory. This year’s The GOAT is an impressive follow-up, with an emotional openness that he credits in part to the birth of his first son. “It makes me see everything from a realer standpoint,” Polo says. “I have to be more on point because I know he is watching me.”

'You Have To Keep People Guessing': Denzel Curry on Martial Arts and Musical Growth

Since Covid-19 slowed down all travel, Polo G’s days of quarantine have been filled with the mundane realities of being a working rapper confined to a couch. It’s given him plenty of time to reflect on the success of The GOAT, which peaked at Number 2 on Rolling Stone‘s albums chart. The new album features production from some of rap’s top names, including Hit-Boy, Murda Beatz, and Mustard, along with guest verses from Lil Baby, Juice WRLD, and more.

That last feature is an important one for Polo: He and the late Juice WRLD had a friendship, and in fact were neighbors in Chicago. “We both lived about 15 minutes away from each other,” Polo says. “We would always pull up on each other and kick it.” 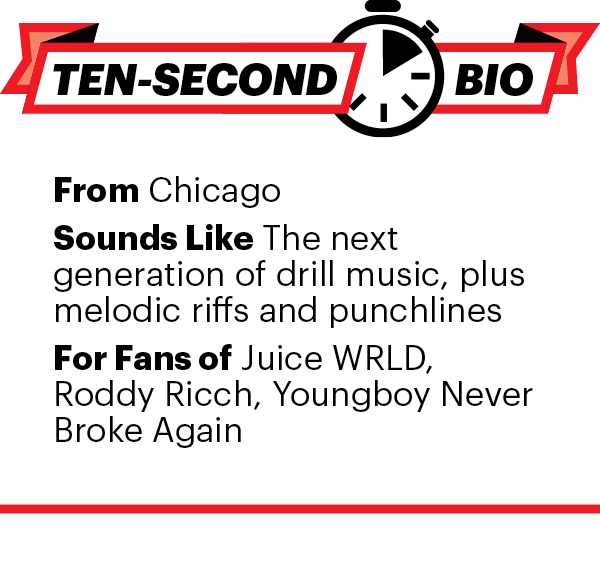 Like Juice WRLD, who died due to a suspected drug overdose, Polo has had his struggles with substance abuse. On standout track “21,” he addresses those issues head-on: “Can’t relapse off these drugs, man R.I.P. to Juice/We was tweakin’ off them Percs, I popped my last one with you.”

Throughout the album, his growth as an MC is evident, showing his range by speaking on how his upbringing and relationships shaped him on “No Matter What,” or the effects of police brutality and poverty on the 2Pac-sampling “Wishing For a Hero.” “I was listening to 2Pac’s ‘Changes’ all while I was on tour,” Polo says. “I am a big Pac fan, so I wanted a song on my project to show my love for him in general.”

It’s clear that Polo G hopes his versatility will lead to a long career — and after The GOAT, that’s where he’s headed. There’s a calm confidence in his voice as he predicts: “Polo is here to stay.”