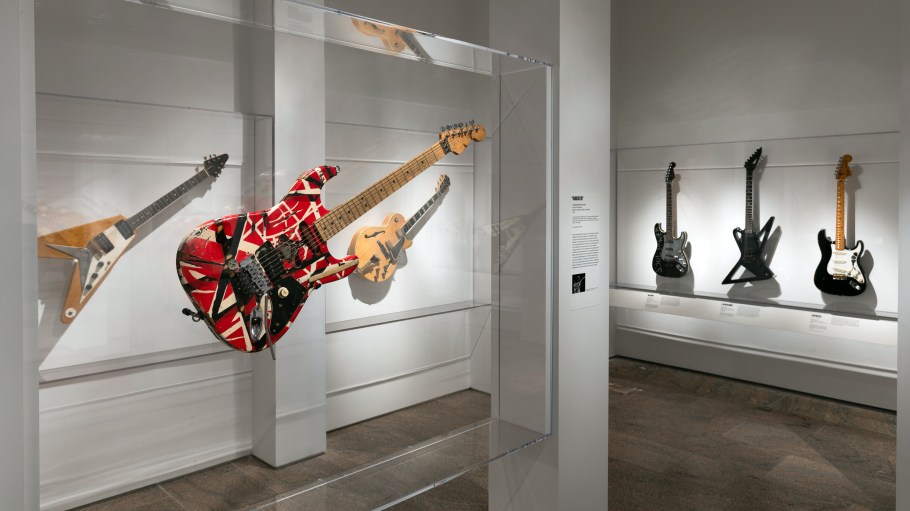 New York’s Metropolitan Museum of Art is home to an overwhelming collection of historical art objects, including a mummy mask from 60 A.D., Greek bronzes from the 8th century B.C. and the original “Washington Crossing the Delaware” painting. Starting April 8th, it will also welcome a different type of antiques — from the guitar Chuck Berry used to record “Johnny B. Goode” to the knives Keith Emerson would stab into his Hammond organ during the crazier Emerson, Lake & Palmer days.

In these days of GarageBand and samplers, it’s easy to forget that nearly all pop music, especially rock & roll, was once banged out on instruments made of wood or metal. The primitive quality of the music was matched by the construction of the instruments, an idea rammed home repeatedly in “Play It Loud: Instruments of Rock & Roll,” which collects both iconic and lesser-known guitars, percussion instruments, keyboards, amplifiers and even posters from the last roughly 60 years of rock.

“Play It Loud,” co-curated by the Met’s Jayson Kerr Dobney and the Rock and Roll Hall of Fame’s Craig Inciardi, is divided into sections devoted to the early days of rock; the “guitar gods” who took that instrument to new heights of innovation and wildness (Eric Clapton, Jimi Hendrix, Eddie Van Halen and more); great rhythm sections; and other themes. Keith Richards, Jimmy Page, Eddie Van Halen and Tom Morello all receive individual displays recreating their stage and studio setups. “Play It Loud” aims to provoke reverent gasps from anyone who cares about rock history, and it succeeds around every bend. It’s impossible to wander around the exhibit, which runs through October 1st before heading to the Hall of Fame in Cleveland, without encountering an instrument responsible for one or another of monumental piece of recorded history.

Iconic Rock Instruments to Exhibit at Metropolitan Museum of Art

Among the many must-sees are the Harmony Sovereign acoustic guitar that Jimmy Page used for parts of “Stairway to Heaven,” the “Love Drops” Flying V guitar that Jimi Hendrix employed for his solo in “All Along the Watchtower,” what’s left of Keith Moon’s “Pictures of Lily” drum kit, the Fender Esquire guitar that Bruce Springsteen holds on the cover of Born to Run, and the Martin acoustic that Elvis Presley used for his Sun recordings in 1955 — the “s” missing from the “Elvis” lettering stuck onto its body. Some of the instruments look closer to demented works of art than usable instruments; with its acrylic extensions jutting out, Lady Gaga’s Artpop-era piano almost looks dangerous to play.

Encountering those instruments, many behind glass, can be a humbling experience, and the wear and tear on some of them is also testament to how visceral rock was. The scratched-up bodies of guitars owned by Stevie Ray Vaughan and Don Everly reveal how hard rockers could be on their gear. We can now see Eddie Van Halen’s Frankenstein guitar in almost gruesome close-up; with its pickups and modifications resembling open wounds, it looks like guitar surgery gone bad. A small curvy chunk under glass, with a bit of wire protruding from it, turns out to be a piece of the Stratocaster that Jimi Hendrix played — and burned — at the Monterey Pop festival in 1967. A guitar owned by Joe Strummer comes with a set list for a Clash show still taped to its side.

Yet it’s also the unexpected additions to “Play It Loud” that are equally fascinating: Brian Jones’ dulcimer from the Rolling Stones’ “Lady Jane,” the mandolin Peter Buck used on R.E.M.’s “Losing My Religion.” Who knew that Ray Manzarek’s Doors keyboard, a Vox Continental organ, had a wooden top and stood on aluminum legs that look like an ironing board? Or that in his living room, Jerry Lee Lewis had a gold baby grand piano that looks more like something a child would play? In the room dedicated to rare rock posters, who knew that there still exists one for the Quarrymen — the band that John Lennon, Paul McCartney and George Harrison had pre-Beatles? (The “Every Saturday” is just about legible.)

Great women from rock’s past and present are well-represented: The wood, metal and plastic Farfisa organ used by Kate Pierson on B-52’s records like “Rock Lobster” is here, alongside the clarinet Patti Smith sometimes breaks out onstage, the Ovation ’80s bass used by Kim Gordon in Sonic Youth (look close and you’ll see a sticker for the band’s 1983 EP Confusion Is Sex), the Höfner bass Tina Weymouth broke out in Talking Heads in the ’80s, and a lime-green St. Vincent guitar.

Five and a half years in the making, “Play It Loud” includes contributions from a wide range of sources. Many of the pieces were donated by collectors. Others come from estates: Yoko Ono donated the 12-string Rickenbacker that John Lennon played on tour in 1964 and on the A Hard Day’s Night album, and Jake Clemons contributed the Selmer Mark VI sax his uncle Clarence used on “Thunder Road” and “Jungleland” and onstage with the E Street Band. A closer look reveals a loop welded onto the horn in two different areas so Clemons could hold the sax with a guitar strap. (“It looks really cool, and you never see that anywhere else,” says Jake Clemons. “I know Clarence would be grateful to know that that kind of attention was being paid to his instrument.”) Graham Nash donated a Duane Allman guitar in his possession, Muddy Waters’ daughter lent his 1958 Fender, and Page himself handed over several of his instruments, including the guitar he used to cut “Kashmir” and the violin bow he scraped across the strings of numerous guitars.

Aside from the Fender Precision bass that session musician Chip Shearin used on the Sugarhill Gang’s groundbreaking rap hit “Rapper’s Delight,” “Play It Loud” doesn’t venture far into the land of hip-hop or dance music — two other sounds that can be played at high volumes, and feature a wide variety of instrumentation of their own. But that’s for another, equally fascinating exhibit at another time. From Elvis’ simple acoustic to the cracked-mirror Paul Stanley six-string and finally to Gaga’s piano, “Play It Loud” reminds you of the ways that rock and pop not only overtook the planet but pushed its gear to inspired physical heights along the way.