True to their name, sludge punks Pissed Jeans have always been committed to generating maximum discomfort. Started in 2004 by four classmates at Nazareth High School in Allentown, Pennsylvania, the band eventually moved to Philadelphia and signed to Sub Pop, which would release their breakthrough LP, 2007’s Hope for Men. Searing Birthday Party–esque riffs fueled their brackish salutes to suburban joggers, boot-lickers and proud ice-cream-eating motherfuckers – a menacing, sardonic sound that clashed with the album’s cover image of two shirtless dudes locked in a tender embrace.

Ten years later, on their fifth studio album, the band turns the tables once again. Why Love Now is their most unsparing work of self-flagellation yet, a generous grope through their own dirty laundry that begs both a smirk and a wince. On the phone with Rolling Stone, frontman and lyricist Matt Korvette says his penchant for self-ridicule may have started when he first played bass at a friend’s 13th birthday party. “We sucked and I didn’t want to be looked at,” he says. “But we had to keep going. And yet somehow, I knew that I wanted more of that.”

Now married with a kid, Korvette spends his weekdays trudging through administrative tasks at an insurance company – which will remain unnamed, although his coworkers seem indifferent. His guttural takes on his own humdrum, middle-class existence may not be high academic theory, but they qualify as gender studies all the same; the band’s catalog pokes fun at white American masculinity and its resulting luxurious chokeholds, paradoxes too often left for feminists to dissect. Why Love Now tackles the dilemmas of craving anal play as a straight guy in “Cold Whip Cream”; or men who derive pleasure from a woman’s disinterest in “Ignorecam”; and, in new single “The Bar Is Low,” the case of powerful male predators who dodge consequences for their misdeeds thanks to society’s ever-shrinking standards.

“It seems like every guy is getting outed across every board of entertainment and politics and music,” says Korvette. “You’re like, ‘No, he’s just a dude that hits on drunk girls and has sex with them when they’re asleep. Cool, he’s just an average shithead.'” In the video for the track, the band members toil along to the plunky, swampy groove at a local gym, fumbling with the equipment, until a crew of sporty dudes show them how it’s done. If there is hope left for men, the clip suggests, perhaps it can stem from a shared failure to live up to their own ideals.

For the members of Pissed Jeans, vulgarity may be their chosen medium, but it was never the message itself. Whereas yesterday’s shock-jock punks provoked show-goers with SS garb and imagery, or seasoned their lyrics with racial slurs and homicidal fantasies, Korvette has crafted a remarkably different kind of strategy for startling his audiences: making men like himself seem insignificant – or at least gruelingly self-aware – in the spaces they once dominated.

“I wanna unsettle the most annoying guys in our pit,” says Korvette. “I don’t wanna be like, ‘Yeah, Pissed Jeans, they really unsettle women. … They make minorities really uncomfortable.’ I’d be like, ‘Holy shit. Lemme completely reevaluate what I’m doing here.’

“We played at this venue in Philadelphia, that has a projection
screen for bands who play visuals,” he continues. “Before we played, I loaded the Facebook event page for the show and just scrolled through the list of people who said they were attending … and made fun of their names, or called them out, or talked to them about their profile pictures. I couldn’t think of anything more horrifying than for someone to load my personal social media profile at a show. That, to me, is like nightmare territory. I’d be like, ‘Oh, James Thompson. Hmm, Philadelphia Flyers logo, real cool dude!’ Like, that simple thing could destroy a guy. It’s not even an insult. … It’s not like I’m showing stolen nude photos. It’s all stuff that people put out willingly. And everyone was laughing, but they were afraid to get called on next.”

For Korvette to maximize his man-trolling potential, he sought out a certain kind of feminine touch. It became that of No Wave veteran Lydia Lunch, a co-producer on Why Love Now. While local metal legend Arthur Rizk (Sumerlands, War Hungry) helmed technical production and engineering duties at the Spice House Sound studio in Philly, Korvette says Lunch’s contribution was a “spiritual” one. “She was a badass presence that would text me at 10 in the morning, reminding me that I had to bring her two bottles of white wine,” laughs Korvette. “There was no lull in energy. She was super scary, constantly threatening to bend us over the bathtub.” When asked what he means, he stammers: “Well … I wasn’t about to find out!”

Two weeks later, under the lush red lighting of a Brooklyn bar, Lydia Lunch takes a generous swig of white wine and cackles. “If they didn’t do what they were supposed to do,” she tells Rolling Stone, “I was gonna give ’em a good ass-whipping.”

The last time Lunch was featured in Rolling Stone, she says, it was Lester Bangs’ 1980 review of her post–Teenage Jesus and the Jerks solo LP Queen of Siam – “Thank you very fucking much,” she hisses – and Bangs would later describe her as the Female Role Model for the Eighties. “But it took these boys to get me to come back,” she says of Pissed Jeans, whose new record is only a footnote in her illustrious career. A gritty nihilist to the core, the punk-rock poet took a self-imposed exile to Barcelona after the 2004 election. “People thought I was exaggerating back then, but I knew this country was already in fascism,” she says. “So I went to a country that was 30 years out of fascism – which was Spain. Now, why did I come back in these times? I love these times. It’s always been Apocalypse Now to me.” 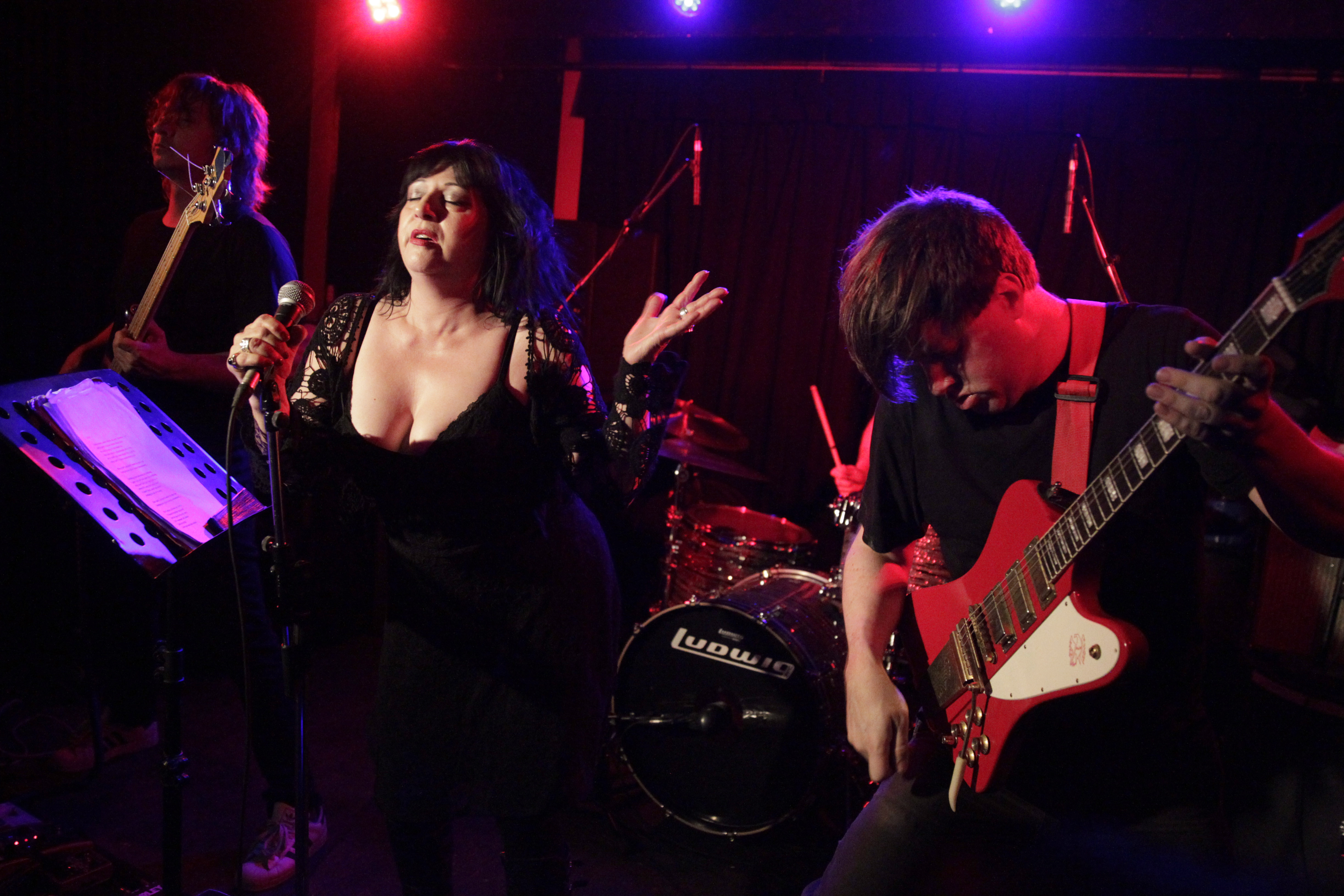 Since 2013, Lunch had been bounding between Europe and the States, crashing friends’ apartments and artist residencies, when Korvette contacted her about producing the new album. “My first question was,” she says, “‘What’s the lyrical content?’ Matt told me, ‘I have a song about women getting paid to ignore men on the Internet.’ Then I was like, ‘Yeah? I’m in!'” She says later, “I’ve sprinkled a fair share of hot ash on them, but I love those boys. I love the perversion … I love that groovy, dirty rock. I was their cheerleader. But to be honest I think they just wanted me for my dirty stories.”

“I brought her to a goth night,” says Korvette. “I felt like the King Shit strutting in there with her. I wanted to knock everyone’s drinks out of their hands and be like, ‘Pay your respects!’

“But she’s the opposite of what you’d imagine, like, an old punk who’s just full of himself,” he continues. “Someone who’s like, ‘Who are you? You weren’t there.’ You know what I mean? That’s totally not Lydia’s vibe. She’ll figure you out and give you some profound revelation of yourself that you didn’t know you needed. Then, she’ll say a lot of dirty stuff that’ll make you blush. … We’re at dinner one night, talking about photographers, and she’s like, ‘Oh, I do photography.’ Then she busts out her laptop and pulls out this full-screen-sized picture of her just sucking a giant dick. I’m like, ‘C’mon, I’m trying to eat my barbecue-seitan sandwich, you know? Just save it ’til later, please.’ I wish I was as fearless as her.”

Another notable contributor to Why Love Now is novelist Lindsay Hunter. The Florida-born author of trailer park gothics like Ugly Girls and Don’t Kiss Me, Hunter lends her talent for salacious wordcraft to the spoken-word track “I’m a Man,” spewing a stream of absurdist phone-sex fodder for the grabby white-collar creep. (“Where’s your boss? Don’t answer that because he’s right here. I’m pointing at me. I’m your boss,” she crows, in one of her more PG-rated lines.) Korvette befriended Hunter after the author shouted out “False Jesii Part 2,” the opening track from Pissed Jeans’ 2014 LP, King of Jeans, in an interview with Fanzine. “I wanted to write a novel that felt like that song,” she says.

“Lindsay Hunter is what I would aspire for Pissed Jeans to be – [an] ugly realness that’s shocking,” says Korvette. “She really does a good job
of like making predatory men seem so plausible and not, like, Lifetime movie, you
know? Even as I hear [‘I’m a Man’], I just
think about all the ways that I would fit that guy’s description and I’m
just like. … ‘Fuck! She nailed it!’ It’s a very unflinching thing to write; it’s not pleasant. … It’s, like, scary real
life.”

Over the years, Korvette has prided himself on cavalierly roasting masculine desires, inadequacies and taboos. But if anything still makes him squirm, he says, it’s too much reality. Rape, war, fascism, pedophilia – topics that Lunch and Hunter broach with gusto – put Korvette in a nebulous grey zone where kneejerk humor wouldn’t fly, and his own sense of control is at stake. “We were in the studio and Lydia showed us this rapper [Drrty Pharms] who talks about this intense, traumatic sexual assault he received when he was a kid. And I was like, ‘Oh, I really don’t wanna hear this.’ It was, like, a really
painful … But that was his whole thing. I don’t know – I just didn’t wanna hear horrible stories like that. But Lydia’s just blasting it happily.”

“I can’t think of anything more soothing than listening to satanic stuff,” he continues. “Because it’s just like Lord of the Rings – it’s an escape from reality. But it’s fun being kind of vulnerable. I feel like the
only way to truly make an audience uncomfortable these days is to be just, like, too real. I think realness makes people more uncomfortable than me jumping into the crowd, cutting myself and wiggling around on them. Anyone can do that, you know?

“Maybe our next record
will just be like, ‘Life is good,'” says Korvette, slipping back into the safety of his trademark sarcasm. “Like, kicking back, having fun. Those can be our tunes.”