Young Thug can’t stop laughing. Just after midnight in a bunkerlike studio in midtown Atlanta, two or three dozen dudes mill around under bright-red lights, many of them flagrantly disregarding the posted rules prohibiting smoking and guns inside the building. At the center of the party stands the 23-year-old star whose expensive new video is looping  on a screen overhead: six feet three, ridiculously skinny, blond dreads pulled back in a bun, black T-shirt matching his skintight jeans. Thug sips codeine-laced soda from a Styrofoam cup and puffs on a blunt as he dances to his own lyrics. Every few minutes, something new sends him into hysterics.

It could be virtually anything: a whispered comment from a friend, a random selfie as he scrolls through Instagram on his iPhone, or an event as mundane as the studio’s engineer taking a bathroom break. “Ooh, he probably has to piss like a racehorse!” Thug says, throwing his head back and cackling like a stoned pterodactyl. He leans on a bystander’s arm for support, then collapses to his knees, literally rolling on the floor in a wild fit of giggles. “I’m loving it,” he says when he catches his breath, shaking his head and grinning. “Who wouldn’t want to be me right now?”

Over the past year, Thug has rapidly emerged as the most exciting new voice in hip-hop – maybe in all of pop music. His approach to rhyming is uniquely weird, blowing past meaning into a realm of pure nonsense and gleeful vulgarity. Even when you can’t understand a word he’s slurring, the energy is irresistible. A hero to the Southern street-rap scene, Thug is also transgressive enough to rock a leopard-print dress in photos and pop-savvy enough to score a Top 20 hit with this summer’s “Lifestyle.” Kanye West, a fan, recently flew Thug out to his home to work on new music. “He looks to me like an animal locked in a cage, ready to eat the world up,” says Birdman, the mogul who made Lil Wayne, Drake and Nicki Minaj into household names, and who hopes to do the same with Thug. “Without a doubt, he’s going to be a superstar. He’s special.”

The next day around 2 p.m., Thug is hanging out in the studio’s rec room/lounge with his girlfriend in one arm and a bag of Funyons in the other hand. He’s in an entirely new outfit – gray long-sleeved shirt studded with colorful sequins, white Versace beanie – except for the socks, which are the same black ones with turquoise spots that he had on last night. Thug explains that he crashed at the studio, as he often does: “I never leave,” he says in a thick, sedated-sounding drawl. “All day, every day, every second. Gotta keep the money coming in.” 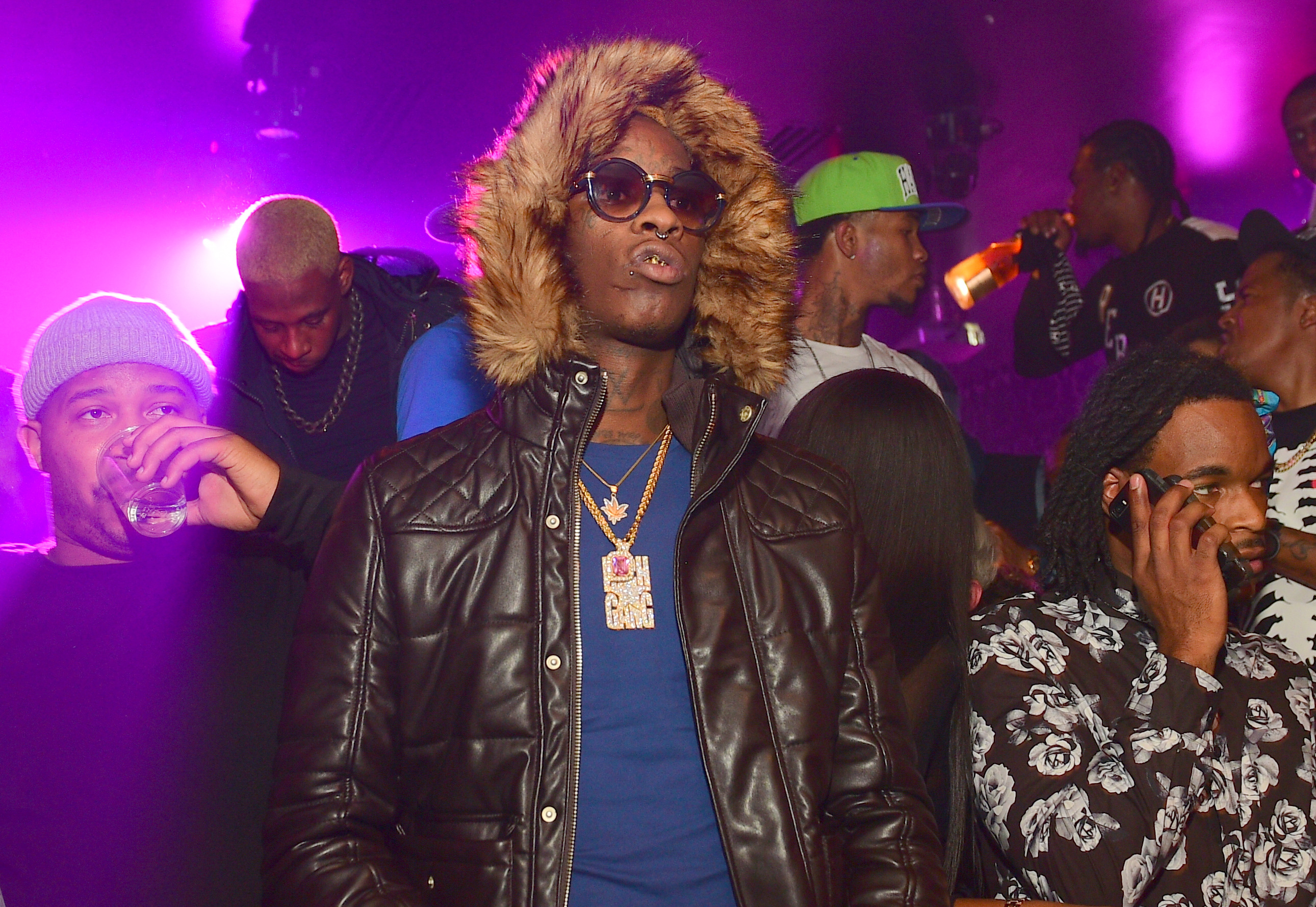 Growing up, the rapper (real name: Jeffrey Williams) was one of 11 siblings living with their parents in a housing project that was later demolished by the city. One of his brothers is currently doing time for murder, and another was shot to death when Thug was in elementary school. “I was in the streets at eight, nine years old,” Thug says. “I was going to school so my dad and mom would keep buying me clothes, but when I got out I did what I wanted to do – fighting, all kinds of shit.”

A few years later, after a dispute over Thug’s classroom antics turned physical, he got kicked out of middle school. “I broke my teacher’s arm,” he says matter-of-factly. “Took his ass out. Pussy-ass nigga.” He spent the next four years in a harsh juvenile-detention program. “Seven in the morning to six in the afternoon,” he says. “No windows or nothing, like a real jail. Lot of punishment. I didn’t do shit there but gamble, smoke and fuck.”

Somewhere along the way, he figured out that he had a seriously marketable skill. “Anyone can rap if you’ve got brains,” Thug says. “So I just went with it.” He released his first mixtape in 2011, and by last year, he was a major regional star.

As the afternoon rolls on, a few of Thug’s friends come by the studio to shoot some pool and get high. One of them casually drops a handgun on the pool table. By 8 p.m., the party is back in full swing. Birdman has showed up wearing a sweater with his face on it, and one of his bodyguards is walking around with an assault rifle. Thug, meanwhile, is back in the studio’s smoke-filled control room, bouncing his toddler-age daughter on his knee, listening to instrumentals, looking bored.

Inspiration strikes after an hour or so: Thug vanishes into a vocal booth and starts improvising rhymes over a woozy bass line, lapsing into melodic gibberish when the words aren’t there yet. As his lyrics start to take form, he repeats key phrases in minutely differing intonations: “Born in ’91, 23 years old with a whole lotta stank . . . whole lotta stank . . . whole lotta stank. . . .” His engineer cuts and pastes the strongest version of each bar into a tight verse, and within an hour, an eerily menacing new Young Thug song has been born. “It’s magic when you see him do what he does,” Birdman says.

It’s getting late when a pair of somber-faced jewelers come by with a delivery of custom gold diamond-encrusted chains, rings, earrings and bracelets. Thug quickly divvies up the haul with Birdman and turns back to the party. “Did you hear that marijuana can prevent Ebola?” someone says loudly. Thug lights another blunt and smiles.