“Looking out, it’s just a gorgeous day,” Pegi Young says from her family ranch south of San Francisco. “It’s beautiful here.” If woodsy nature weren’t inspiring enough, the arrival of a grandchild about 10 days before is also reason to celebrate. “Seeing him and holding him – oh, my gosh,” Young says of her grandson. “It was euphoric. It was just amazing.”

Young’s recent life hasn’t always been so joyful. Two years ago, word leaked out that her husband Neil was filing for divorce after 36 years of marriage. “We were having a rough patch,” Pegi, 63, admits. “But I never would’ve thought in a million years we would be getting divorced. So, yeah, there was a bit of a shock value there.”

Like many before her, Young decided to turn her range of feelings into songs. In 2007, Young, who had frequently sung backup in her husband’s band, belatedly launched her own career with a self-titled album, followed by three more. But none are quite like Raw, which Young will release in February. Raw opens with a pointed jab at her ex, “Why” (as in “Why’d you have to ruin my life,” its refrain). In songs she co-wrote with two members of her band, keyboard legend Spooner Oldham and guitarist Kelvin Holly, Young works her way through feelings of hurt (“Gave My Best to You,” “Too Little Too Late,” “Lonely”), acceptance (“You Won’t Take My Laugh Away from Me”) and, finally, exhaustion with her own turmoil (“Up to Here”). Interspersed are covers soaked in heartbreak: Otis Clay’s “Trying to Live My Life Without You,” Dolly Parton’s “Do I Ever Cross Your Mind,”” Randy VanWarmer’s 1978 Lite FM hit “Just When I Needed You Most” and the Nancy Sinatra–associated feminist anthem “These Boots Are Made for Walkin’.”

“We looked at all the songs we had and I just put together this initial sequence and, you know, it was perfect,” Young says. “It told a story. I kind of look at it as a soundtrack to the seven stages of grief. You’ve got anger, then shock and disbelief. As we go through the album, the later songs show my growth and … I can’t say total acceptance, but I think the last song, that wonderful Don Henley song [“The Heart of the Matter”], talks about forgiveness. That’s really where it’s at, you know?”

Has Young arrived at forgiveness in light of what happened? “Yeah – oh, totally!” she roars. “I’ve actually written a couple of songs in the last couple of months that are a little bit more lighthearted.”

Young admits that acceptance was hard won, especially given the length of her marriage. She and Young met in the mid-Seventies when she was a waitress near his ranch, and they married in 1978 and had two children (Ben and Amber Jean). In the years that followed, the Youngs appeared to be one of rock’s most steadfast couples, with Pegi serving as her husband’s companion, protector and muse (some of his most romantic songs, like “Once an Angel” and “Such a Woman,” are about her). “I guarded our privacy,” she says. “That was super important to me. So when Neil came back off the road, he had a private life. And we had a private life, you know as our family, and just what we did on a normal day-to-day basis.” 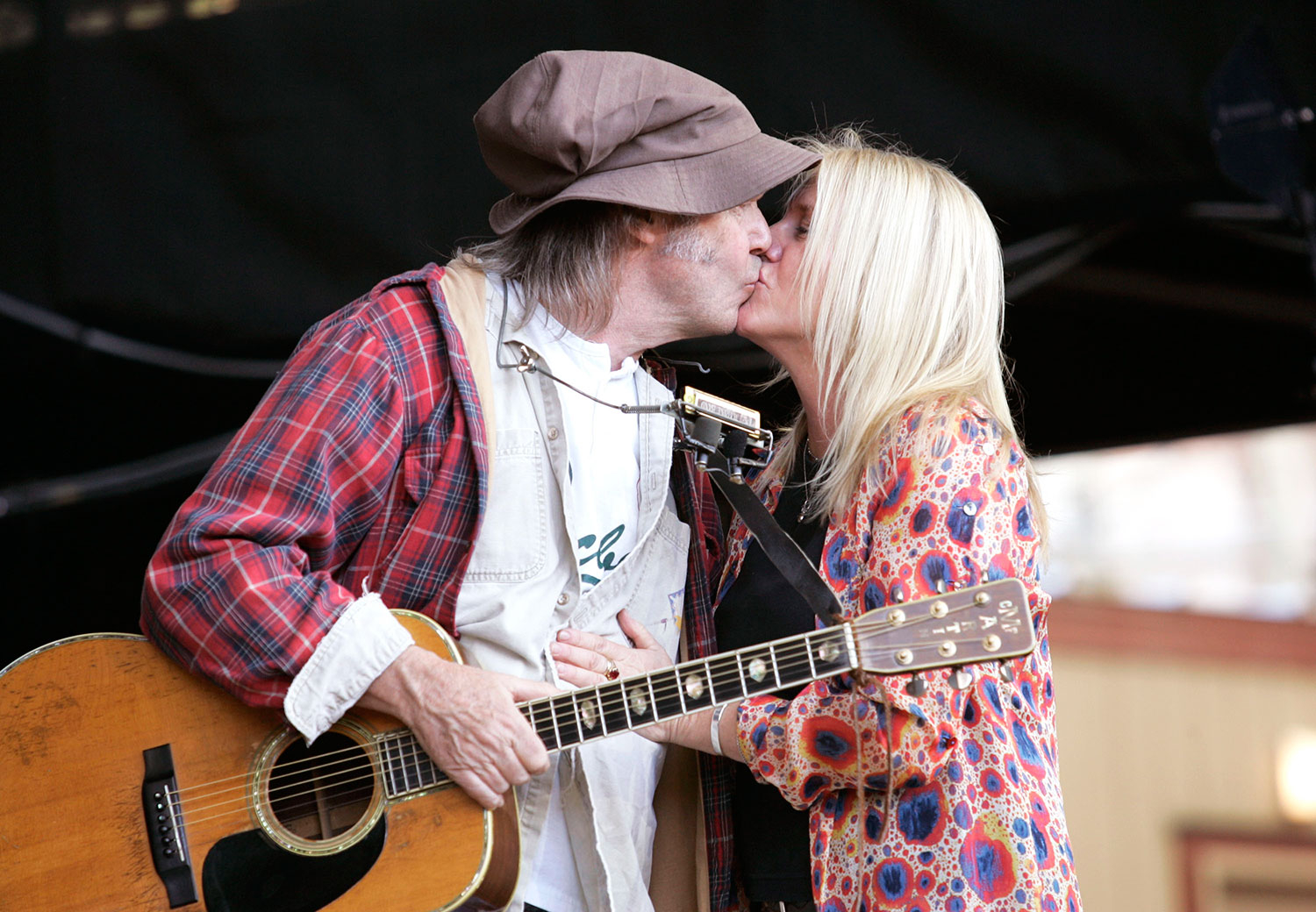 That life was shattered with the news that Young had taken up with a new girlfriend, actress and activist Daryl Hannah, which led to the Youngs’ under-the-radar marriage becoming tabloid fodder. “It was tough on all of us, for my kids and me,” Pegi says. “Everybody knew what was going on in my family. So we were as ready as we could be for all that. But it was just kind of awful to have it be all over, everywhere.”

When the news broke, Young had just released her fourth album, Lonely in a Crowded Room, with her band the Survivors. Although songs on that album and some of its predecessors – “Lonely Women Make Good Lovers,” “Gonna Walk Away,” “Lie” – seemed to imply marital discord, Young denies that was the case at the time. “Things weren’t entirely going well,” she says. “People look at those songs and go, ‘Oh, well, that was obviously a precursor to the divorce.’ But it really wasn’t.”

That wasn’t the case with the new songs she began writing post-divorce. “Those early songs seem like the angriest,” she laughs now. “I had to figure out at 61 years of age: ‘Holy moly! Who am I?’ So much of my life has been dedicated to my family and to Neil. So I was a bit lost for a while. I was on my own for a long time before I married Neil, and now I’m on my own again. I’ve kind of gotten over the separation and divorce. I’m capable. I can do this.”

When the Youngs divorced, Pegi was given their Broken Arrow Ranch in Redwood City, California, which Young bought in 1970. Pegi now runs the place herself, with hired hands. (“I feel like Barbara Stanwyck,” she jokes, referring to the matriarchal character Stanwyck played in Sixties TV series The Big Valley.) She says she and her ex have little contact these days but did run into each other at this year’s annual benefit for the Bridge School, the school for children with disabilities that Young co-founded in the Eighties. (Their son Ben was born with cerebral palsy.) “That was fine,” she says. “I don’t want awkward. Take the high road, that’s my approach. The concert is about the kids and the preschool, and that’s so much more important than the Neil and Pegi drama.” 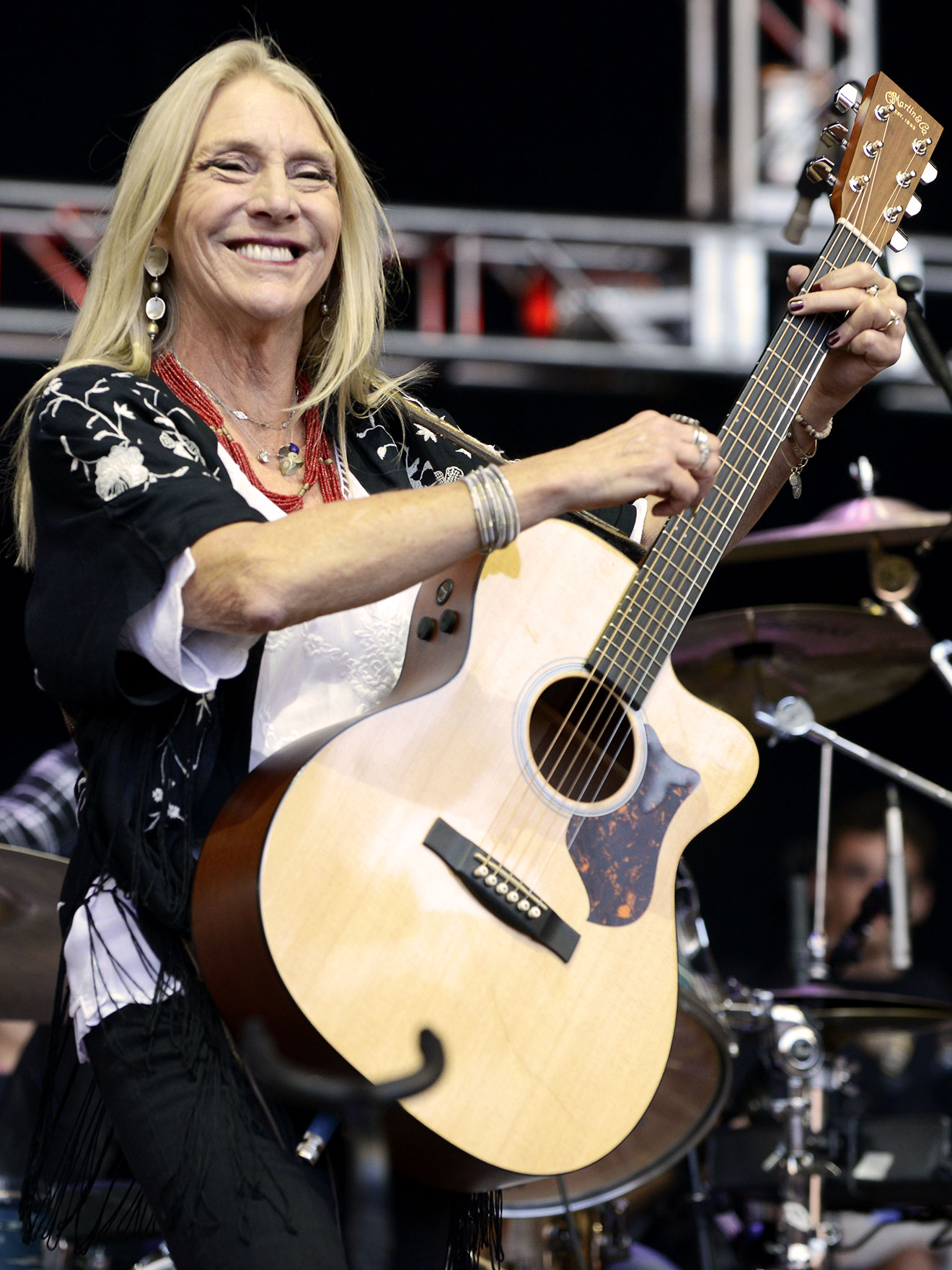 Despite the heartbreak that accompanied her breakup, Young admits one aspect of her life with Neil has stayed with her: his candid approach to songwriting. “Having lived with him for so many years and learning from him by observance, he writes from his heart,” she says. “So I just don’t think there’s any other way to go about it.”

Pegi doubts her ex-husband has heard Raw, and she herself hasn’t listened to the music he’s released since his new romance. “I don’t think it’s, you know, really in my best interest to do that,” she laughs. She says Amber Jean is keeping a distance from both her parents’ post-breakup work. “My daughter has said she is currently equal-opportunity,” Young says. “She said, ‘No offense, mom, but I’m not listening to any of dad’s stuff and I’m not listening to any of your stuff.’ I think that’s fair enough. I just played her ‘These Boots Are Made for Walkin’.’ Innocuous enough. She liked that.”

Although she’s keenly aware that many will listen to Raw for insights into the collapse of her marriage, Young says she hopes the album transcends the situation that inspired it. “Even though this is probably the most personal record I’ve ever done, I still think there’s a universality to it,” she says. “I’m certainly not the only person to have gone through a divorce. I’m not the only person who’s had heartbreak. Heartbreak is pretty universal, sadly but truly. And I hope that other people that have gone through similar or different situations can relate to it.”

And what does Young want people to learn from the album? “I guess I just want people to know there’s hope, and not just hope but forgiveness, which is so key to our mental health,” she says. “We go through things we may not’ve expected, what we thought was maybe our future. But even if we get the shock of our lifetime, life goes on. You figure out who you are again, and you just keep going on. I’m a living persona of that.”