One of the most successful rock bands of the past quarter-century, Pearl Jam have released 10 studio LPs and numerous live records and official bootlegs over the course of their career, selling an estimated 60 million albums worldwide. But if they’d released only one record – their 1991 debut, Ten – their place in rock history would still be secure. Ten, which turns 25 on August 27th, unleashed the modern-rock classics “Alive,” “Jeremy” and “Even Flow,” established the previously unknown Eddie Vedder as a superstar frontman and went on to sell more than 13 million copies in the U.S. alone.

For better or worse, the success of Ten also helped push the Seattle rock scene that spawned it (and “grunge” culture in general) squarely into the national spotlight, and inspired a host of lesser bands who blatantly imitated Pearl Jam’s densely rumbling attack and Vedder’s distinctive baritone roar. It also effectively blurred the lines between so-called alternative and mainstream rock, igniting a heated debate among the band’s critics, fans and fellow musicians over whether Pearl Jam were major-label sell-outs, or committed artists whose musical vision just happened to be broad enough to fill arenas.

Now that the debates have cooled and the dust has settled, however, Ten stands tall as one of the most iconic records of its era. To celebrate the 25th anniversary of the album’s release, here are 10 lesser-known facts about Ten.

1. Ten was recorded on a modest budget.
Formed out of the ashes of Mother Love Bone – whose frontman Andrew Wood died of a heroin overdose in March 1990, shortly before the release of Apple, their lone full-length album – Pearl Jam were determined to avoid MLB’s costly excesses and mistakes. “I think we spent about $25,000 making [Ten] and about three times that mixing it,” bassist Jeff Ament recently told Classic Rock. “But it was still a third of the money that we’d spent making the Mother Love Bone record. We didn’t expect the record to be a huge deal. But I guess it kinda became one.”

2. “Alive” is actually a demo recording (with a little bit of sweetening).
In January 1991, Pearl Jam (still known at the time as Mookie Blaylock) recorded several songs at Seattle’s London Bridge studio as part of a demo session with future Ten producer Rick Parashar. One of those songs was “Alive,” which would become one of Pearl Jam’s most enduring anthems. When the band proved unable to duplicate the power and intensity of the “Alive” demo during the official Ten recording sessions in March and April, they decided to go with the original recording for the album (and for their first single) – albeit with a new Mike McCready guitar solo that was added to the outro during the album’s final mix. “We’d captured that song at that moment,” drummer Dave Krusen, whose alcohol issues forced him to leave the band before Ten‘s release, remembered in the book Pearl Jam Twenty. “And it was really good.”

3. Mike McCready’s “Alive” solo was inspired by Ace Frehley.
For the epic two-minute solo that closes “Alive,” lead guitarist Mike McCready tried to channel one of his childhood heroes: Kiss ax man Ace Frehley. “Ace was their firecracker, their dynamite,” McCready wrote in Rolling Stone in 2014. “He’s what took them over the top with the feel he put into his leads. I really gravitated towards his vibrato. My lead for ‘Alive’ is based on ‘She,’ and that’s based on ‘Five to One’ by the Doors. I remember we were [doing the final mix for Ten] in Surrey, England. I thought about it like, I’m going to approach this like Ace did on ‘She.’ And I remember the chord pattern that Stone [Gossard] wrote lent it to that kind of a descending pattern. So I kind of went with it. And then I improvised from there.” 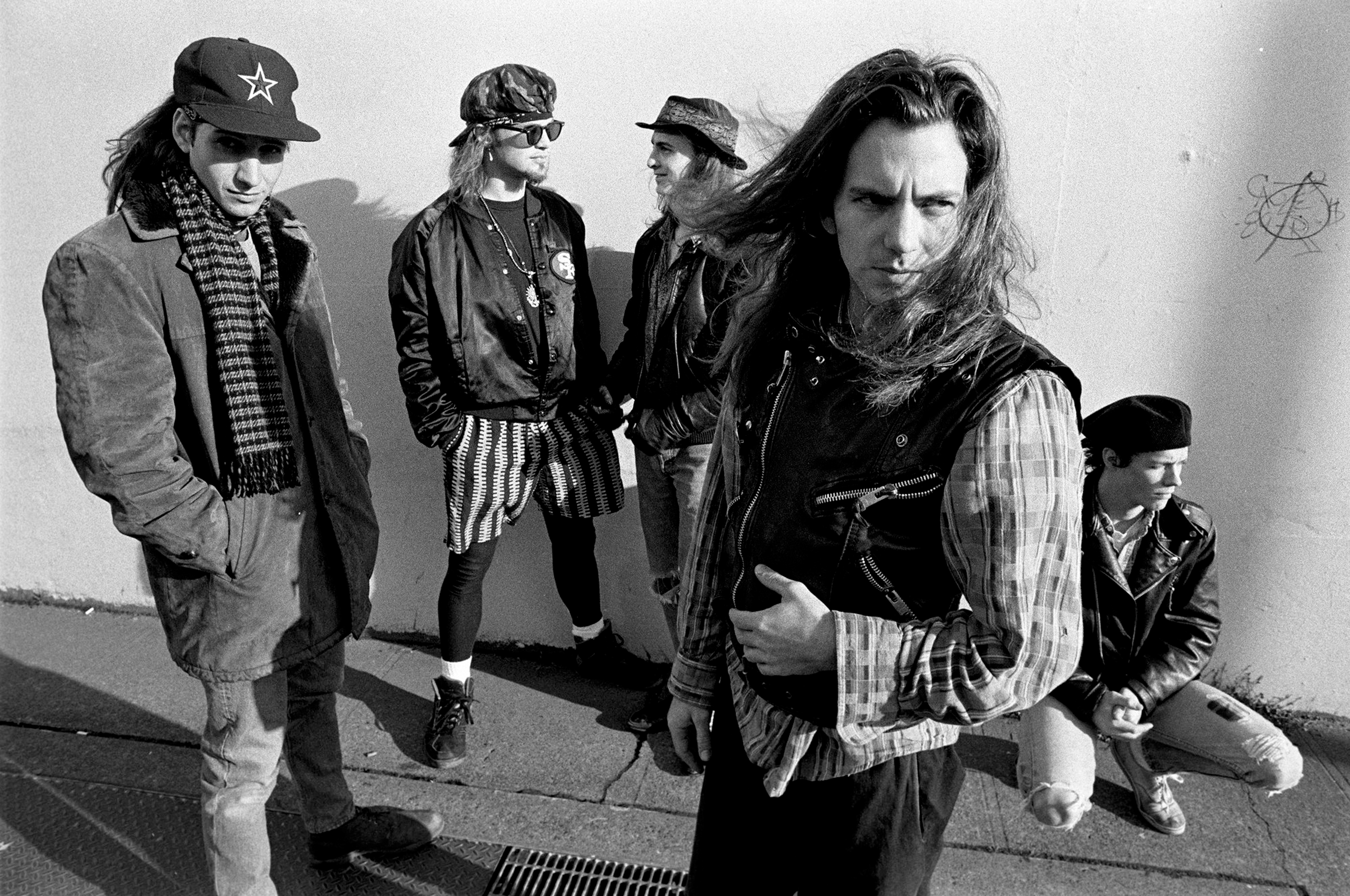 4. Eddie Vedder wrote the lyrics to “Oceans” while locked out of the band’s rehearsal space.
Throughout the creation of Ten, Eddie Vedder repeatedly impressed his bandmates with his ability to come up with lyrics for entire songs on the spur of the moment. “Oceans” is a perfect example, penned while the singer was accidentally locked out of the band’s rehearsal space during a rainstorm. “Someone asked me to put change in the parking meter for them,” Vedder recalled to Seattle Sound in 2009. “I went and did that and then I came back and was locked out. It was drizzling and I wasn’t dressed for an outing in the rain. I had a scrap of paper and a pen in my pocket, and they were playing this song [inside]. All I could hear was the bass coming through the wall, this window that was boarded up. So I wrote the song to the bass. I wasn’t even listening to hear the song at first. When I heard a break, I’d start pounding on the door … trying to get out of the rain. So as I was doing that, I thought, fuck it, I might as well write something.”

5. The final mix of “Oceans” features some very unusual percussion instruments.
In June 1991, having finished the recording sessions for Ten in Seattle, Pearl Jam flew to England to mix the tracks with Tim Palmer at Ridge Farm Studio, a residential recording complex in a small town near the Sussex-Surrey border. So remote was the studio that, when Palmer decided that some last-minute percussion overdubs were in order for “Oceans,” he wound up using a pepper mill and a fire extinguisher to achieve the desired effect. “The reason I used those items was purely because we were so far from a music rental shop,” Palmer told Guitar World in 2002. “Necessity became the mother of invention.”

6. “Even Flow” took forever to record – and the band was less than satisfied with the final result.
The second single released from Ten, the hard-charging “Even Flow” would become one of Pearl Jam’s most popular songs – but getting a satisfactory take of it in the studio proved to be one of the Ten sessions’ biggest headaches. “We did ‘Even Flow’ about 50, 70 times,” McCready told The Daily Record in 2009. “I swear to God it was a nightmare. We played that thing over and over until we hated each other. I still don’t think Stone is satisfied with how it came out.” The band would subsequently re-record the song for the soundtrack of the 1992 film Singles, with new drummer Dave Abbruzzese behind the kit. 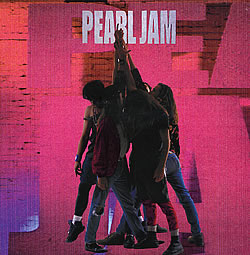 7. The “Pearl Jam” lettering on the album’s cover was actually a giant cutout made by Jeff Ament.
Though Ten‘s album cover makes it look like the band members are superimposed over letters spelling out “Pearl Jam,” they were actually doing their “all-for-one” pose for photographer Lance Mercer in front of a giant wooden “Pearl Jam” cutout designed and constructed by Jeff Ament, who served as art director for the original album packaging. “That thing we’re standing in front of was actual size!” Dave Krusen recalled in 2009. “Jeff’s an amazing artist through and through.”

8. Epic wanted to release “Black” as a single, but the band refused.
In 1992, with Ten riding high on the charts and “Alive,” “Even Flow” and “Jeremy” all having achieved bona fide hit status, Epic Records began pushing to release the emotional ballad “Black” as a single. The band, feeling that the song was too personal to be subjected to heavy radio promotion (not to mention the inevitable video treatment), refused to grant permission. “Some songs just aren’t meant to be played between Hit No. 2 and Hit No. 3,” Vedder told Cameron Crowe and Rolling Stone in 1993. “You start doing those things, you’ll crush it. That’s not why we wrote songs. We didn’t write to make hits.” Sensing listener demand, radio programmers across the country took matters into their own hands and played it anyway, sending the track to Number Three on Billboard‘s Mainstream Rock Tracks chart in 1993.

9. Ten wasn’t released on vinyl in the U.S. until more than three years after it came out on compact disc.
By August 1991, when Ten was first released, American major labels were already rapidly phasing out vinyl production in favor of the more profitable compact disc. Vinyl releases were now primarily limited to new titles by mega-selling acts; and since no one at Epic expected Ten to go gold in the U.S., much less 13-times platinum, the company didn’t even consider pressing up a vinyl edition for the American market. (The record was released on vinyl in several other countries, however.) “They didn’t let us put it out on vinyl,” Jeff Ament told The Daily Record in 2009, “and that was a rough blow to us at the time ’cause I don’t think I even had a CD player.” Though the original U.S. vinyl pressings of Ten show a 1991 copyright date, Ten didn’t actually receive a domestic vinyl release until November 22nd, 1994 – the same day that Pearl Jam’s third album, Vitalogy (featuring the pro-vinyl anthem “Spin the Black Circle”) also made its vinyl debut.

10. Ten would have topped the U.S. album charts in 1992, if it hadn’t been for Billy Ray Cyrus.
After a slow and steady build – fueled to a large degree by Pearl Jam’s legendary live shows on the 1992 Lollapalooza tour – Ten finally reached the upper echelons of the Billboard 200 in August 1992, nearly a full year after its release. Unfortunately, Pearl Jam’s path to the top of the charts was firmly blocked by Billy Ray Cyrus, whose debut album Some Gave All spent a mind-boggling 17 consecutive weeks at Number One in the spring, summer and fall of 1992. Though Ten reached the Number Two spot four times that August, September and October, it never sold quite enough copies to unseat Miley’s mulleted dad.