Paul McCartney plays two gigs at every stop on his current arena and stadium tours: the evening concert, a magical history tour of nearly 40 songs from every era of his musical life before, in and after the Beatles; and an hour-long soundcheck that doubles as a technical rehearsal for McCartney’s crew and band and exclusive entertainment for a small group of fans, granted access as part of a VIP-ticket package.

On July 12th, at Citizens Bank Park in Philadelphia, McCartney and his 21st Century combo – guitarists Rusty Anderson and Brian Ray, keyboard player Paul “Wix” Wickens and drummer Abe Laboriel Jr. – performed a 12-song set under the late afternoon sun, opening with a blues jam featuring the leader on electric guitar and briskly covering the same historic span as the main event: the Beatles’ jangling arrangement of “Honey Don’t” by their Sun Records idol Carl Perkins; “Midnight Special,” reaching back to McCartney’s Liverpool boyhood in skiffle; the 1972 Wings flipside “C Moon”; the Ram ballad “Ram On,” with McCartney on ukulele; the mid-Sixties Beatles artifacts “I’ll Follow the Sun” and “I’ve Just Seen a Face”; and “Everybody out There” from McCartney’s 2013 solo album, New.

Only one song appeared in the set list that night, “Lady Madonna.” But everything in that soundcheck, McCartney explained later in his backstage trailer, was part of “a routine that has grown into a ritual” – a personal pleasure for a rock icon who, at 74, can’t stay away from the stage. McCartney spoke passionately about his lifelong fascination with performance, as an art and joy, during our conversations in July: two sessions in England and Philadelphia that resulted in one of the most revealing interviews McCartney has ever given, featured in the new issue of Rolling Stone. These additional excerpts begin with one of the first things I asked McCartney as we sat down in his office at the London headquarters of his company, MPL.

As this is the 50th anniversary of the Beatles quitting the road, whatever happened to the tape that [the Beatles’ press officer] Tony Barrow recorded from the field at the final concert, on August 29th, 1966, at Candlestick Park in San Francisco? He made one copy of the tape for himself, then gave you the original.
No idea. Whatever happened to a lot of stuff? I’m amazed that we’ve got what we’ve got. I actually go to our archive [downstairs at MPL] and they say, “Look at this.” I go, “Oh, my God, where’d you get that?” It just turned out somebody saved it. But [that tape] – I have no idea.

Did you ever listen to it after Barrow gave it to you?
I don’t remember listening to it. So that probably means I didn’t.

The reason I asked is that you are now playing in the same venues – stadiums – that drove the Beatles to distraction and ultimately off the road.
At the point of Candlestick Park, we had all had enough. We’d had enough of playing rain-soaked stages with lousy PAs, the audience being louder than we were. That was the decision, and I think it was a good decision. It didn’t really come up: “We should have stayed a band, we should have kept touring.” The only time it came up for me was when the Beatles were splitting up, and we had this famous little meeting where John arrived and said, “I’m leaving the band.”

My solution to that, which I put forward, was we should go and be a little band again – just get right back, play little stages. Because that was the secret of the Beatles. We were a damn good little band. When somebody struck up “Long Tall Sally,” “Rock and Roll Music” or “Everybody’s Trying to Be My Baby,” we all fell in. We just became that band. I thought it might heal us. It wasn’t to be. [McCartney’s idea, originally titled Get Back, became the film and record Let It Be.] But that was the nearest we came.

Speaking of anniversaries, when you played “I’ve Just Seen a Face” in soundcheck [in Philadelphia], I remembered that I first saw you do it 40 years ago, on Wings’ only U.S. tour – the first time you performed any Beatles songs since the band broke up. Are there old songs that, as you keep touring, you find that you still haven’t done live yet?
There’s a lot that I haven’t played live – millions [laughs]. I don’t really work at it. They just kind of pop out. I hear them on the radio or on a compilation.

What was the last one that ended up in the show?
I think it was “Love Me Do.” People have asked me through the years – David Bowie said, “Why don’t you do ‘Love Me Do’?” I thought, “Well, because it’s a little song.” But enough people said they liked it for me to go, “We’ll rehearse it. And if in rehearsal it sucks, then no.” In actual fact, it was great. Now it’s a big favorite.

There are a couple of songs – it’s not that I don’t want to do them. We’ve rehearsed them. But I just couldn’t make ’em work. Or they sounded more like records than live songs. “The Back Seat of My Car” [on 1971’s Ram] – I always thought that would be good. “Uncle Albert” [“Uncle Albert/Admiral Halsey,” also on Ram] – I thought that might be nice. We tried “Back Seat of My Car,” and it just seemed a bit complicated. 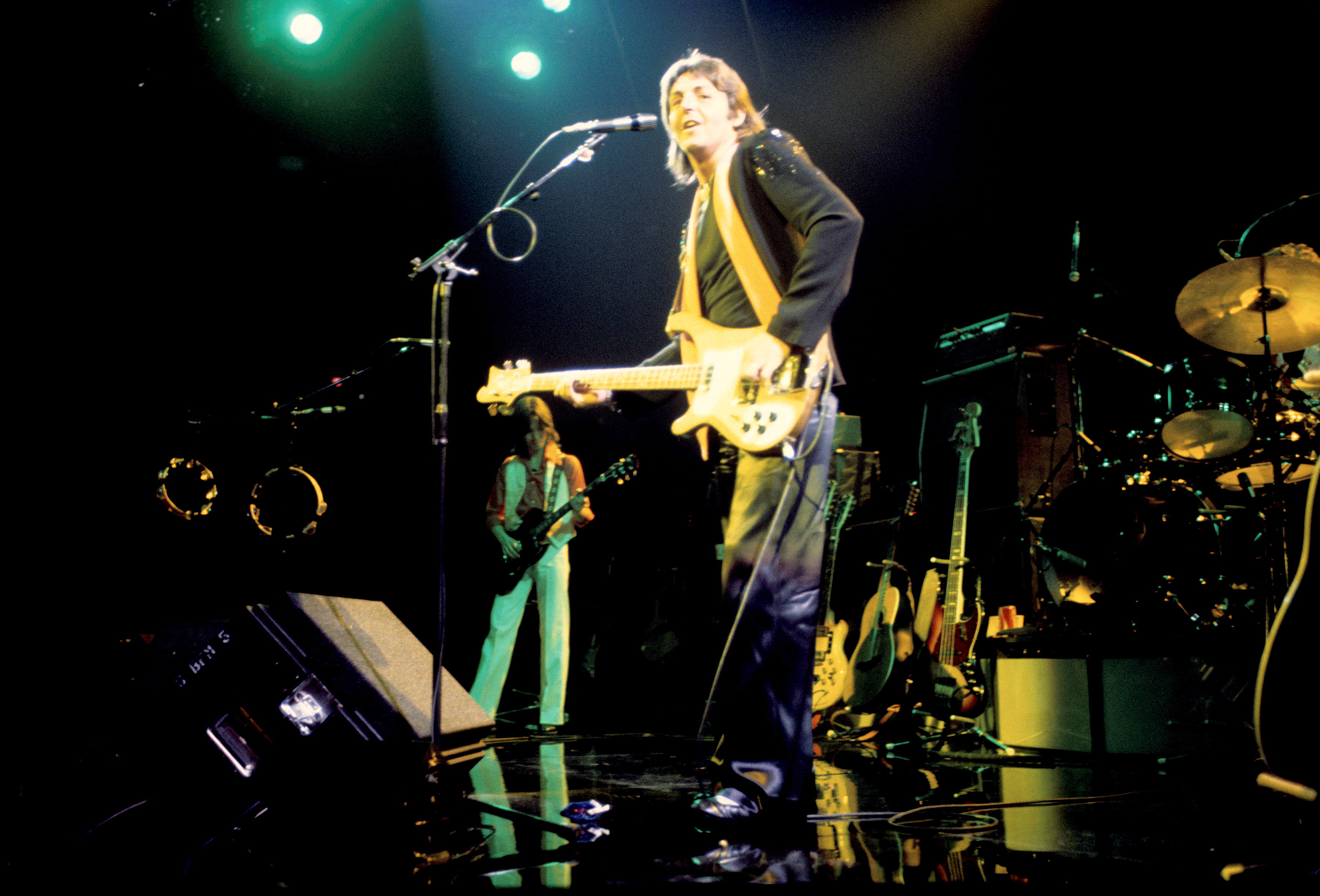 Ironically, that period for you – the early solo and Wings records – was supposed to be about getting back to making records that were less complicated, away from the structure and detailed arrangements of Beatles songs.
You know what? It could have just been the day at the rehearsal – I didn’t get it. Some of them I persevere with. “I can sing this. I’m just singing it badly.” I keep on it and eventually crack it: “I’m glad I got it.” But a song I just can’t get right – I just go, “Fuck it, don’t need to do it.”

There is obviously a technical side to soundchecks – making sure everything works. But I was watching your facial expression on the screen as you were playing electric guitar in the opening jam. You were looking down at your hands as you hit those blues licks, enjoying yourself as much as the audience later enjoyed the real show.
In the old days, you’d just go jing, jing on that guitar. OK, next guitar: jing, jing. You’d just run through things. I found that boring. So I always start off on electric guitar. It’s still as big a thrill as when I was a kid. And when we jam, in fact, I’m collecting some of these jams because one or two of them are really good.

The soundcheck is actually structured like a gig. You move to piano for some songs; there is an acoustic set; and you paid homage to your roots in “Midnight Special” and the Carl Perkins cover.
We also do [Jesse Fuller’s] “San Francisco Bay Blues.” Some of these things remind you of other songs in our repertoire, like “Mrs. Vandebilt” [on Wings’ 1973 album, Band on the Run] or “Every Night” [on 1970’s McCartney]. We don’t do them in the show anymore, but [the soundcheck] keeps the songs in there. Depending on the mood, we’ll see how experimental we want to get.

There’s an old thing, “Don’t Let the Sun Catch You Cryin'” – not the Gerry and the Pacemakers one, the Ray Charles one [on the 1959 album The Genius of Ray Charles]. I used to do that with the Beatles in Hamburg. That’s a nice thing to pull back. It’s an echo of the show. The roadies know, “OK, he’s testing that. He’s gonna do his pedal there.” We run through everything that happens in the show.

But when it comes to the show, it’s all in a different form. And we didn’t get bored. So the show is interesting now – all that checking we did, but with loads of people instead of a few, with a different set of songs. It keeps it fresh. And it’s interesting that it’s grown up – a tribal ritual that I’ve constructed. We all know and trust this ritual.

You have a long performance history with Philadelphia. The Beatles played at Convention Hall on the 1964 tour and at John F. Kennedy Stadium in 1966. And Philly was one of the handful of cities where you played multiple shows on Wings’ 1976 tour.
Certain cities are always cool. Philly’s one of them. There’s this joke in America: “There’s New York and L.A., and nothing in between.”

That’s usually said by people from New York and L.A..
But it’s not true. I was from Liverpool, not London. It was this thing where you don’t have a whole lot, so your family becomes quite a big focus – you’re not just off at work and the kids are at boarding school. You’re focused on what is immediately around you: your house, your family, your dad and mum’s jobs.

That’s why I like these places – Milwaukee, Cincinnati, Philadelphia, Pittsburgh. I feel like they are where I’m from, in a way. And I can see what it is they’re doing. They’re bringing their kids to say, “This is that guy that we talked about. He was in that band we talked about.”

They’re continuing the emotional transaction.
It’s great to be part of that. And we pull people out of the audience. They kind of dictate that, by the signs. It started off with the tattoos.

I did notice someone at soundcheck with a sign that said “Tattoo” on it.
You sign their arm, and they get a tattoo of it. We did a lot of that. Then they started to say, “Marry us.” “I’ve Got the Ring.” So we pulled a couple of them up. We goof around with them. “What’s your name? Are you engaged yet? Is this what you wanna do, in front of all these people? OK, get down on your knee.” And the audience goes, “Yeah!”

At the back of my mind, I’m going, “Don’t go too far with this. This could be a bit of a game show.” It was the other night [laughs]. But it’s people – just people. And I like that. Everyone comes up to me in the street and goes, “Can I have a photograph?” I say, “I’m sorry, I don’t do that. But I’ll chat to you.”

Which is a lot more meaningful.
I think so. Everyone wants proof. “Nobody will ever believe me.” I say, “Tough – they’re gonna have to.” [Laughs] But it is quite good fun. You find out the strangest things about people. I enjoy that – always did.

That comes into the show. There’s all these little things that we do that grow. One night, somebody [in the band] does something, and you notice that it gets a reaction from the audience. That person will keep it in: “He’s gonna go over there and do that.” It becomes part of the ritual.

That’s part of the fascination for me, the little human things that the tribe does. Because it comes out of family and love and all of the other stuff that I value. People can laugh at it, but love – it is this huge, central thing at our core. The good, old Beatles wrote about it. And I continue to write about it. All you need is love.