“It’s almost like pressing the reset button and going back to the garage,” says Tony Kanal of Dreamcar, his new band with fellow No Doubt mates Tom Dumont and Adrian Young and AFI frontman Davey Havok. “It’s like a rebirth, a really beautiful, pure and positive thing.”

Formed in 2014 – though their existence was only announced a year ago – the supergroup finally unveils their first single, “Kill for Candy,” today. With its propulsive groove, echoing guitar and soaring chorus, the song offers a tasty preview of Dreamcar’s self-titled 12-song debut album, out May 12th on Columbia Records. Produced by Tim Pagnotta (Neon Trees), the record is heavily reminiscent of such Eighties icons as Duran Duran and Flock of Seagulls, though with a decided 21st-century twist.

Gwen Stefani on No Doubt's Future, Working With Prince

“There are a lot of things on the album that are Eighties-influenced,” says Kanal, “but I feel like what we’ve created is something very fresh and new, too. You have to find that balance, and I think we’ve achieved that.”

We spoke with Kanal about the origins of Dreamcar, their music, their touring plans and what their existence means for the future of No Doubt.

How did Dreamcar originally come together?
It started about two and a half years ago. Tom, Adrian and myself have realized after all these years that we really love playing music together, and we’d been flirting for a long time with the idea of doing another project. We finally started writing some music together, but we weren’t going to go out and look for somebody to be the singer for this project – that just didn’t make any sense, and I don’t think that would have worked. It was more about someone coming onto our radar, and that’s kind of what happened with Davey.

How did Davey come onto your radar?
Well, we knew Davey from the music scene, and seeing his bands play. Back in 2012, his band Blaqk Audio supported No Doubt when we played some shows at the Universal Amphitheater in Los Angeles, and he was incredible; he’s an incredible frontman, one of the best. And then he moved to L.A. about a year later, and I would see him out and about, since we eat at similar places. So it was like all these little seeds were planted along the way to finally make us go, “Wait a minute – let’s ask Davey!”

How did you extend the invitation?
We literally courted Davey. We asked him on a date! [Laughs] We took him to one of our favorite restaurants in L.A. – this was back in, like, May 2014 – and we said, “Hey, we’ve got a bunch of tracks, and we wanted to know if you’d be interested in working on some music with us.” And he was like, “Yep!”

We sent him the stuff we’d been working on a day or two later; and in a few days we got back these four ideas from him, and it was like, “Awww, this could be interesting and cool!” We went into the studio with him and worked on them, and that was kind of the beginning.

The ideas that Davey came back to you with – was it pretty much the sort of thing that you’d envisioned for the material, or did he take it in a different direction?
We had no idea what he was going to come back with. But you just know if something’s working, though; there’s a feeling inside that you can’t quantify, but it just happens. It was like, “Wow, we need to keep exploring this!” Over the course of the next two years, I think we wrote 30 ideas, 12 of which made it onto the album.

There’s definitely a serious Eighties “New Romantic” vibe to these tracks. Was that something you were trying to do, or did the music just come out like that?
No, it just came out like that. We were teens in the Eighties, and that’s the kind of music that we all grew up on. When you’re in those really formative years, from, like, 13 to 19, what you listen to is so influential, and I think that’s just part of our being now. It was never like, “Oh, let’s try to do this!” It’s just the stuff that makes you feel comfortable.

Tell us a little about the first single, “Kill for Candy.”
It’s always hard to talk about music and describe a song. But it was one of the first four songs that we worked on with Davey, and I think it’s a great way to introduce the band to the world. I can’t be more excited about it – and the fact that the single is finally being released is pretty awesome and epic.

You did an excellent job of keeping the band’s existence a secret.
Yeah! The beautiful thing is that for the first year or year and a half, it was just the four of us working on music. Other than, like, our significant others, who obviously knew where we were going to, nobody knew that we were doing this project. We were doing it kind of in secrecy, because we didn’t know what it was going to become; we were working on music just to work on music. It’s almost like you don’t want to talk about it – you just want to do it, and see if something is going to come of it. So there was a beauty to that, because we really haven’t experienced something like that for such a long time.

Did doing it on the down-low allow you more creative freedom?
Oh, yeah. We weren’t bouncing the ideas off of managers, record companies, anybody. You’re doing it only because you want to get in the same room and make music together. There’s something so pure and exciting about that, and you can lose that when you’ve been doing it for a long time – when there’s lots of people involved, it can sometimes become a machine. This way, it allowed us to work in a completely pressure-free environment. You’re just making music, being experimental, and seeing what’s going to happen. I highly recommend it! [Laughs]

It’s such a great thing, because it just reminds you of what you were doing when you first started. That’s what you did – you made music! And [with No Doubt] we were lucky enough to capture a moment, and people related to it, and things happened. But that’s really what it’s about: creating something that comes from within, and hoping that people connect with it, as well.

So, even though three-fourths of the band are from No Doubt, this isn’t meant to be a reboot of No Doubt in any way, shape or form?
Oh, no. To be abundantly clear, No Doubt is four people, and that could never be recreated or replicated. This is a completely different project, and we would never, ever characterize it as anything to do with No Doubt. 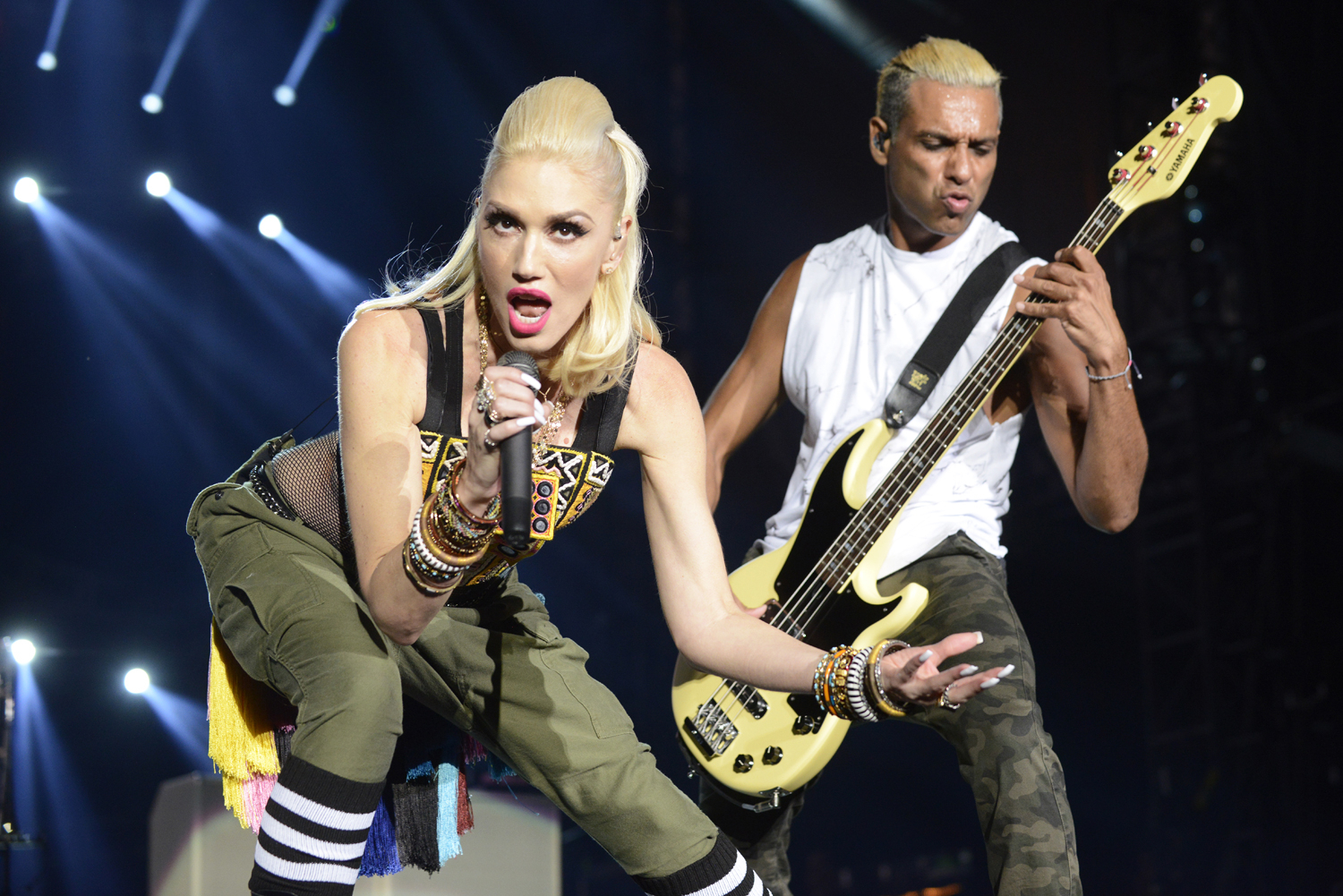 Will you be taking Dreamcar on the road?
Yes, absolutely! We’re doing Coachella, and we’re going to do a bunch of warm-up shows prior to Coachella, which I’m really excited about. We’re going to do a bunch of small club shows on the West Coast, and then we’ll be playing some East Coast shows soon. Tom, Adrian and I, we haven’t done club shows in years, so that’s another exciting component of this. We’re getting together this week in Adrian’s basement to just start getting our chops together, which is awesome. It’s part of that whole no-pressure thing I was telling you about – just jamming in his basement, which is frickin’ so much fun!