Not long after the London-based singer Nilüfer Yanya signed with an American label in 2017, she ran headlong into a creative wall. “Knowing that whatever I wrote might be on the album, that put a block on my head,” she explains. At first she responded to the pressure with perverse logic. “Knowing that as soon as I write a song, it either is gonna be good enough or not good enough — guess I’ll just not write anything then,” she reasoned.

Thankfully, that period didn’t last long, and Yanya’s debut album, Miss Universe, arrived late last month. It skates swiftly from scuzzy rock to pinprick funk, from power chords and splatting cymbals to soft, prettily multi-tracked hooks — like all of Everything But the Girl’s Eighties output condensed into one album. 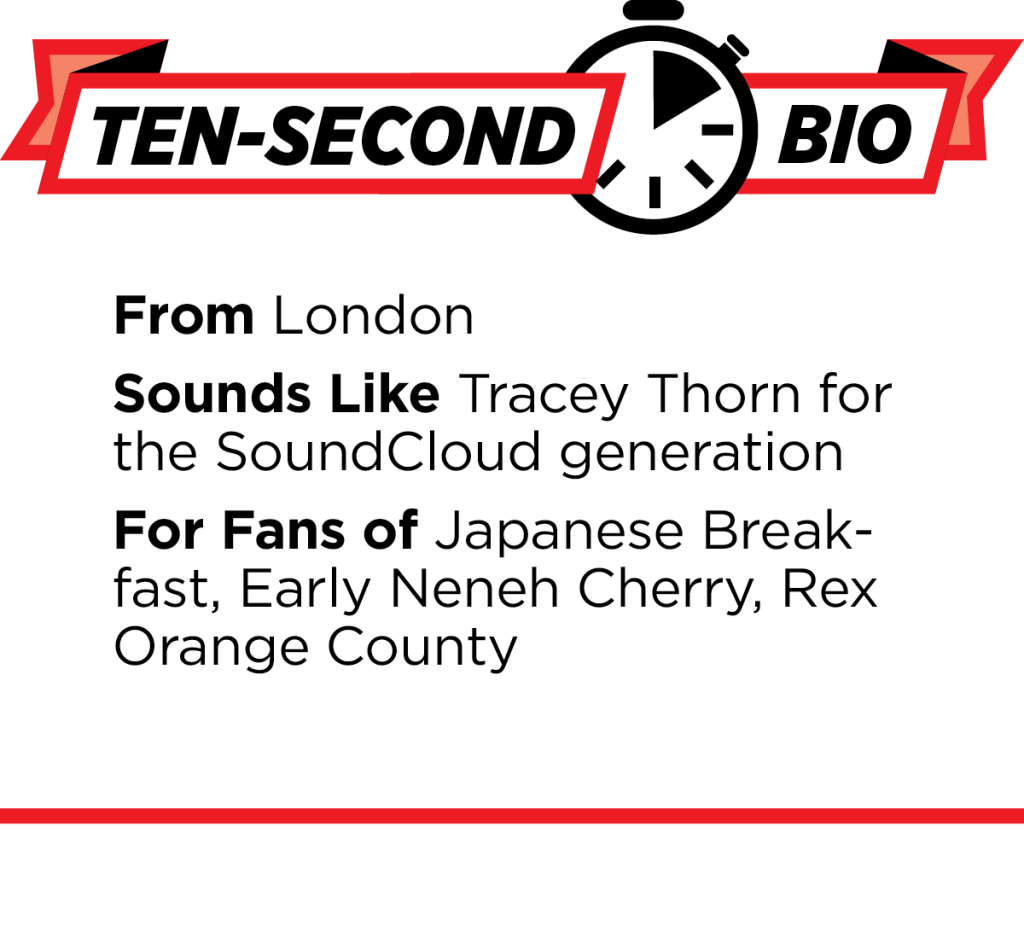 “She’s a singer-songwriter, but she rocks,” says Bruce Warren, a radio veteran who has been supporting Yanya’s music at WXPN in Philadelphia. “She writes great hooks. She does the loud-quiet thing really well. We’ve been a fan since the first EP.”

On a recent trip to New York City, Yanya was fresh off a showcase that she felt was a little shaky. “New material, and we had only had two rehearsals prior, so it was a bit rough,” she says. “The first show has to happen at some point. It’s always scary to do the first gig.”

But she was buoyant and unconcerned, drinking champagne from a flute and happily evangelizing for veganism. (“Eggs are basically meat!”) “When I was 18 I started forcing myself to play as many shows as I could,” Yanya says. “I remember writing bios for myself and sending it around to venues: ‘I like your venue, it has a cool vibe, I played this and this venue, I’m working on an EP.’ I’m like, I hate this! Then you get into a weird circle of basically bad venues.”

Los Bitchos Already Conquered the Globe. You Just Haven't Heard of Them Yet

“I’m painting a dark picture,” she adds. “It’s not bad. But it’s hard. Every step you’re taking, there’s someone telling you this isn’t gonna work.”

By the time Yanya worked her way into London’s live scene, she had already been writing and recording songs for a few years, some of which she uploaded to SoundCloud. These were mostly just singer-songwriter fare, with the guitar mic’d like it’s right next to your ear.

While putting together “Monsters Under the Bed,” the song that first brought her attention from labels, she worked at her uncle’s studio, resulting in something more hi-fi: a slippery, “Come As You Are”-like pop song. “It’s probably what I needed for people to hear,” Yanya says. “People in the industry have good ears, but they also have bad ears — they can only hear something when it’s shiny. ‘Oh, I can see this is a product!'”

If “Monsters Under the Bed” attracted label attention for sounding clean, Yanya’s videos remained more abstruse. 2017’s “Golden Cage” has an off-the-cuff, capture-an-outing-on-a-Camcorder feel. Nearly every frame is devoid of people other than Yanya; her hair keeps blowing into her face; segues between shots are big and blocky and homespun. Meanwhile, Yanya talk-sings and unfurls graceful high notes, while the hook is one of her strongest, a snappy beam of soul complete with skronking saxophone.

The “Golden Cage” clip enthralled the blues-rock yowler Benjamin Booker, who sent a late-night email about it to Jon Salter, head of the New York City-based indie ATO Records. “[Booker] sends me stuff he thinks that would be cool for the label, and he sent me the video for ‘Golden Cage,'” Salter remembers. “It was maybe 1:30, 2 in the morning, but that video was so immediate for me. Within ten minutes I was searching through my emails and trying to find her manager.”

Several labels were already chasing Yanya. For a while, she says, “I didn’t even think about signing because everyone was like, ‘You don’t really need a label anymore.’ But I sort of realized, to fund a record, you do kind of need a label.” ATO won her allegiance — in part, Salter says, because Yanya loved other singers on the label’s roster, like Nick Hakim, who specializes in sleepy, homespun piano-soul.

To combat the “guess I’ll just not write anything” pressure Yanya felt while making Miss Universe, she entered the studio with other writer-producers, including Oli Barton-Wood, MT Hadley and Bastian Langbaek. “In a session like that, you have to be productive,” Yanya explains. “You don’t just wanna sit there. I knew I needed to write something, and I would try to stop being so precious. I learned a lot. But also I lost a lot of confidence in the process.”

A few songs on Miss Universe are older: “Monsters Under the Bed” appears again here, as does “Baby Blu,” which captures the tricky transition from mourning to moving on, and “Heat Rises,” a breathless guitar-pop missile.

But many of Yanya’s tracks grew out of the new sessions. “Safety Net” melds “an old verse I had for ages that didn’t work” with an old chorus from Hadley. “We just squashed them together,” Yanya remembers. The merger was tough to execute. “He was ready to give up at one point: ‘This isn’t working,'” Yanya says. “But I was like, ‘no, I want to use this riff.'”

It’s impossible to hear that painstaking process in the resulting track — “Safety Net” is languid and funky, unhurried and unabashedly beautiful. “I feel like it’s a real pop song, in a good way,” Yanya says. “It’s the kind of pop song I’ve been wanting to write for ages but haven’t really been able to.”

Now Miss Universe is out, and Yanya is fresh off a tour as the opening act for Sharon Van Etten, a good opportunity to introduce more indie rock listeners to her music. But she’s aching to do more writing — songs, or maybe fiction. “Soon the whole album thing will fade away and it’ll be like, what have I done for a whole year?” she says.

“I started writing at the same age that you start doing all those other things that you turn into a person, so me writing is me being a person,” Yanya continues. “Not writing anything — what I am doing? I need to write something immediately.”