The 2021 Newport Folk Festival (technically titled “Folk On”) is, for obvious reasons, much different than past installments: Coming off a year of mass tragedy and societal reckoning, this year’s event, ongoing through July 28th, features double the amount of days — six instead of three — reduced capacity, and fewer stages. The first three days were the folkiest in recent memory: more acoustic, more intimate, and more traditionally minded than usual. Patterson Hood and Mike Cooley delivered their timeless Drive-By Trucker tunes as an acoustic duo, Katie Crutchfield performed highlights from her 2020 opus, Saint Cloud, backed only by a drummer, and Devon Gilfillian reached back 50 years for his album-length tribute to Marvin Gaye’s What’s Going On. Here are 10 of the best things we saw during the fest’s opening weekend. 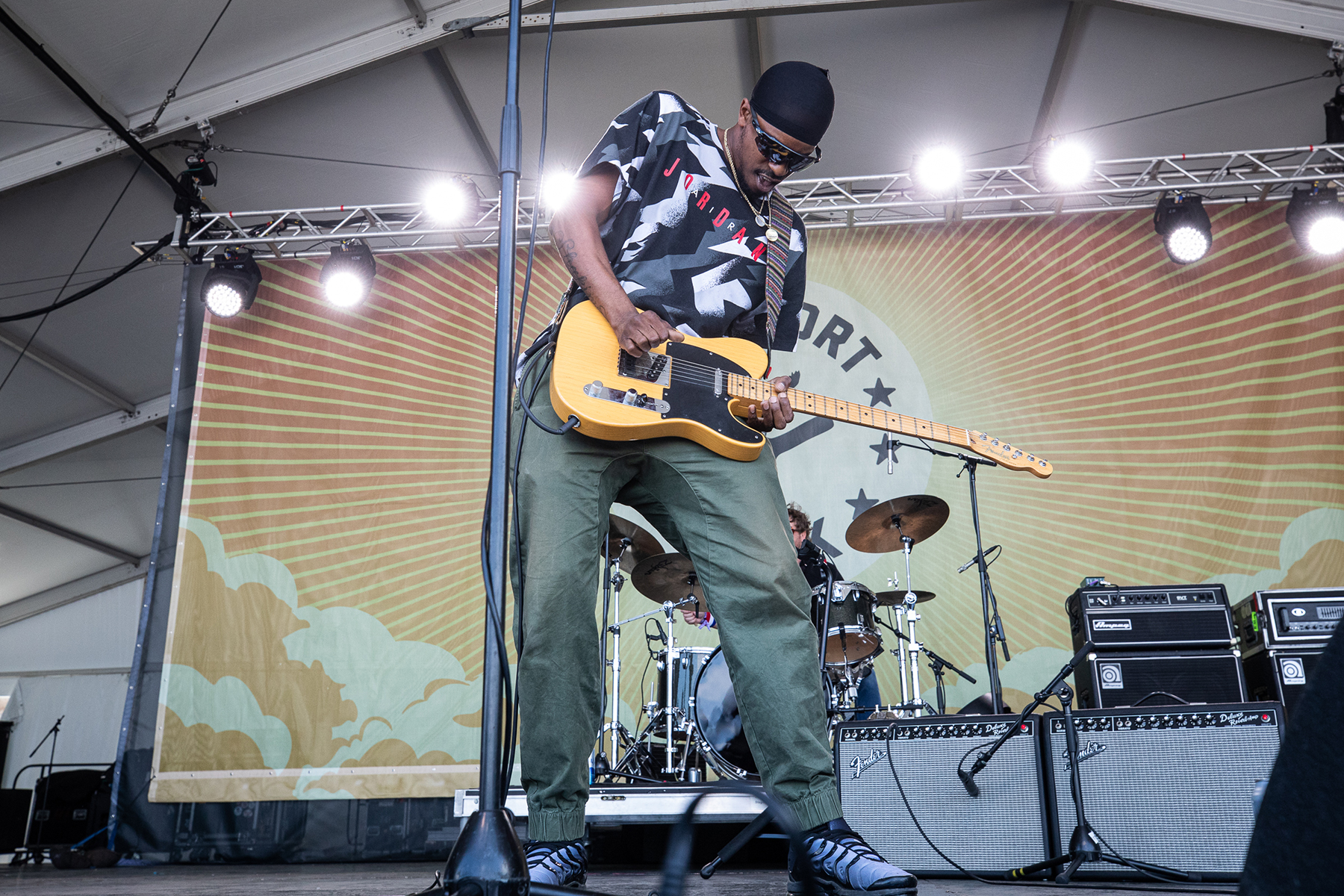 For the past dozen or so years, Black Joe Lewis and the Honeybears’ blend of garage rock, blues, and R&B has made the collective a mainstay on the Austin live scene. The band had never performed at Newport until this year, when Lewis and Co. delivered one of the weekend’s most high-energy performances. The singer-guitarist moved from riotous soul shouting to blues growling during a versatile set that cycled through old standbys like “I’m Broke” and crowd favorite “Booty City.” The central draw throughout was Lewis’ guitar playing, at once refined and expansive. For a crowd that had waited more than a year to hear live music, the Texas group’s no-nonsense set of bar-band raves felt like an opening-day benediction, and Lewis himself made sure to note the festival’s precedent for such raucous displays: “Bob would be proud, and all that shit.” 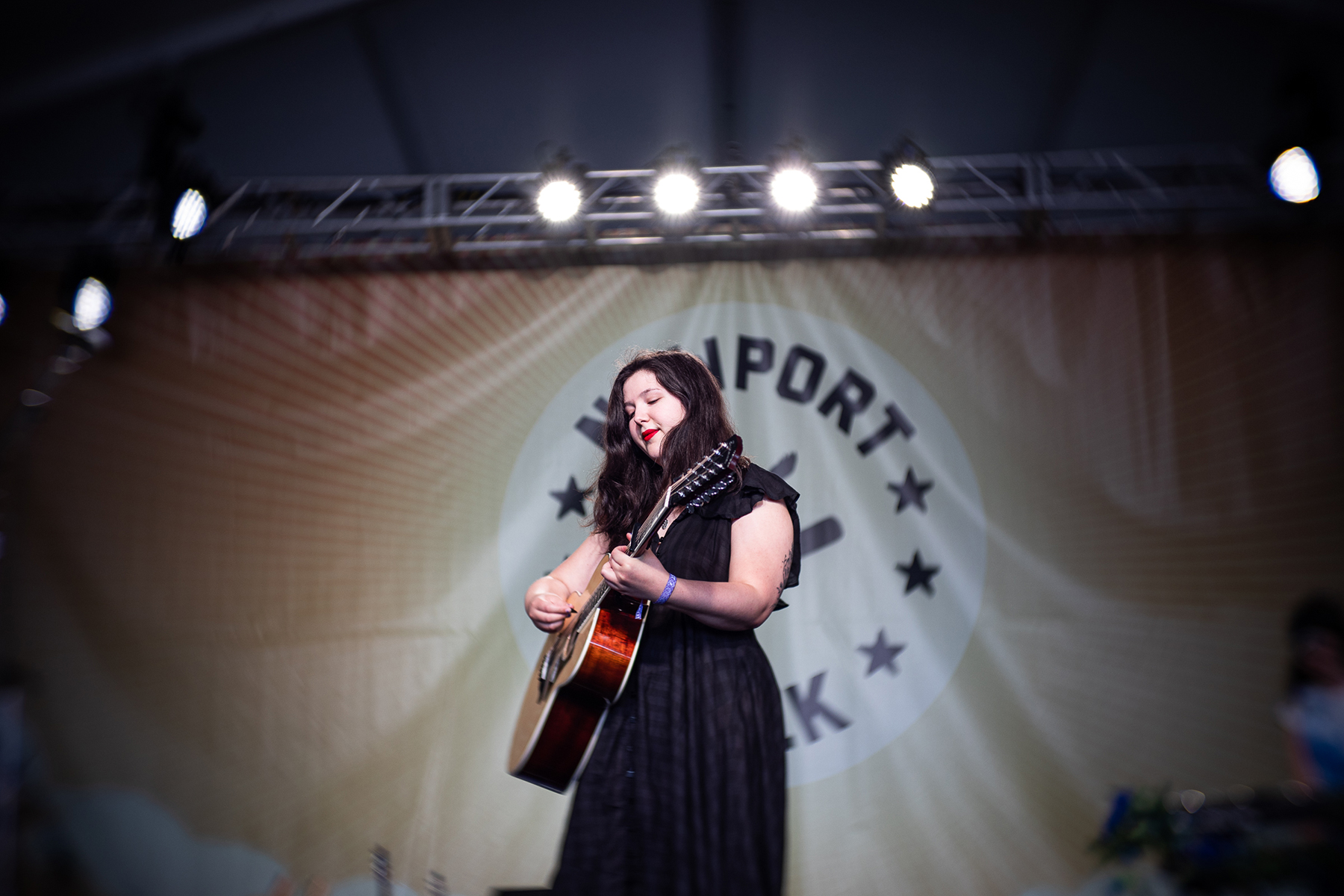 “Oh, I’m so nervous,” Lucy Dacus confessed early on in her Friday-afternoon set, explaining that it was only her band’s second live performance since the pandemic began. But having just released one of the year’s best albums, Dacus and her band turned their tentativeness into a thrilling showcase of Home Video, delivering performances that were full of vulnerability and exploration. Dacus played the album’s closing epic, “Triple Dog Dare,” for the first time ever, called up fellow Folk Fest friends Adia Victoria, Tré Burt, and Haley Heynderickx for a closing singalong on “Going Gone Gone,” and offered Historian highlights like “Night Shift” and “Yours & Mine.” When it came time to perform the Home Video centerpiece “Partner in Crime,” which Dacus sings in Auto-Tune on the record, the singer-songwriter pulled off a gorgeous stripped-down take sans vocal manipulation — “This is a folk festival; they simply can’t handle it,” she quipped — accompanied only by Jacob Blizard on acoustic guitar. 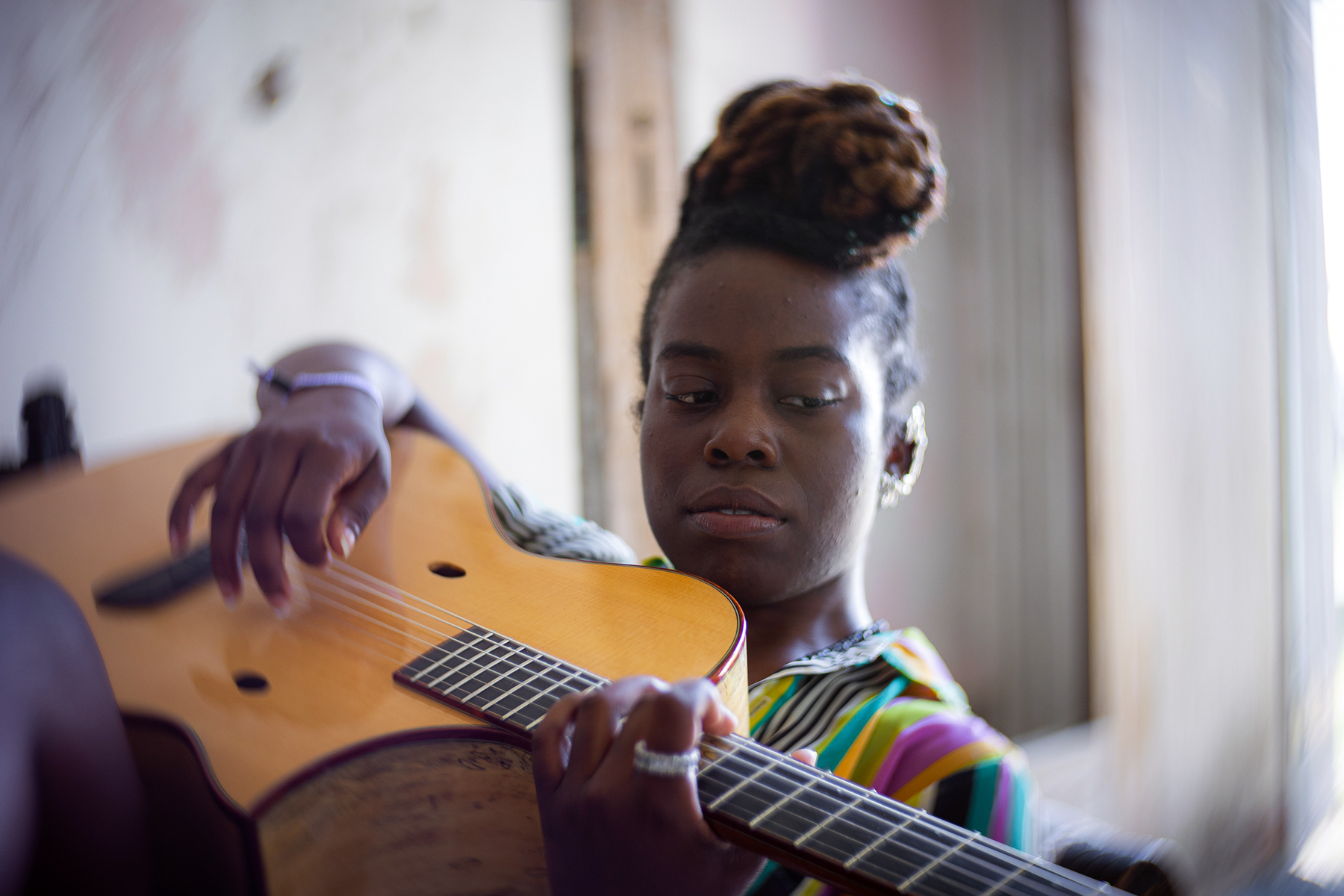 “If you like weird stuff, which I obviously do …,” began Yasmin Williams’ introduction to her 2018 song “High Five,” which involved tapping her guitar with what she called a “guitar hammer thing.” It was just one of many moments during Williams’ solo set in which the 25-year-old guitarist challenged and redefined the parameters of fingerpicking. On songs like “On a Friday Night,” “Juvanescence,” and an untitled song she had just begun writing the night before, Williams turned her acoustic guitar into her own instrumental staging ground, tapping, fingerpicking, playing the instrument with a bow, and strumming a kalimba she had attached to her guitar. The crowd watched the spellbinding display of precise and careful craft in silence, as Williams narrated her own Guitar Hero–inspired dozen-year journey to instrumental innovator in between songs. 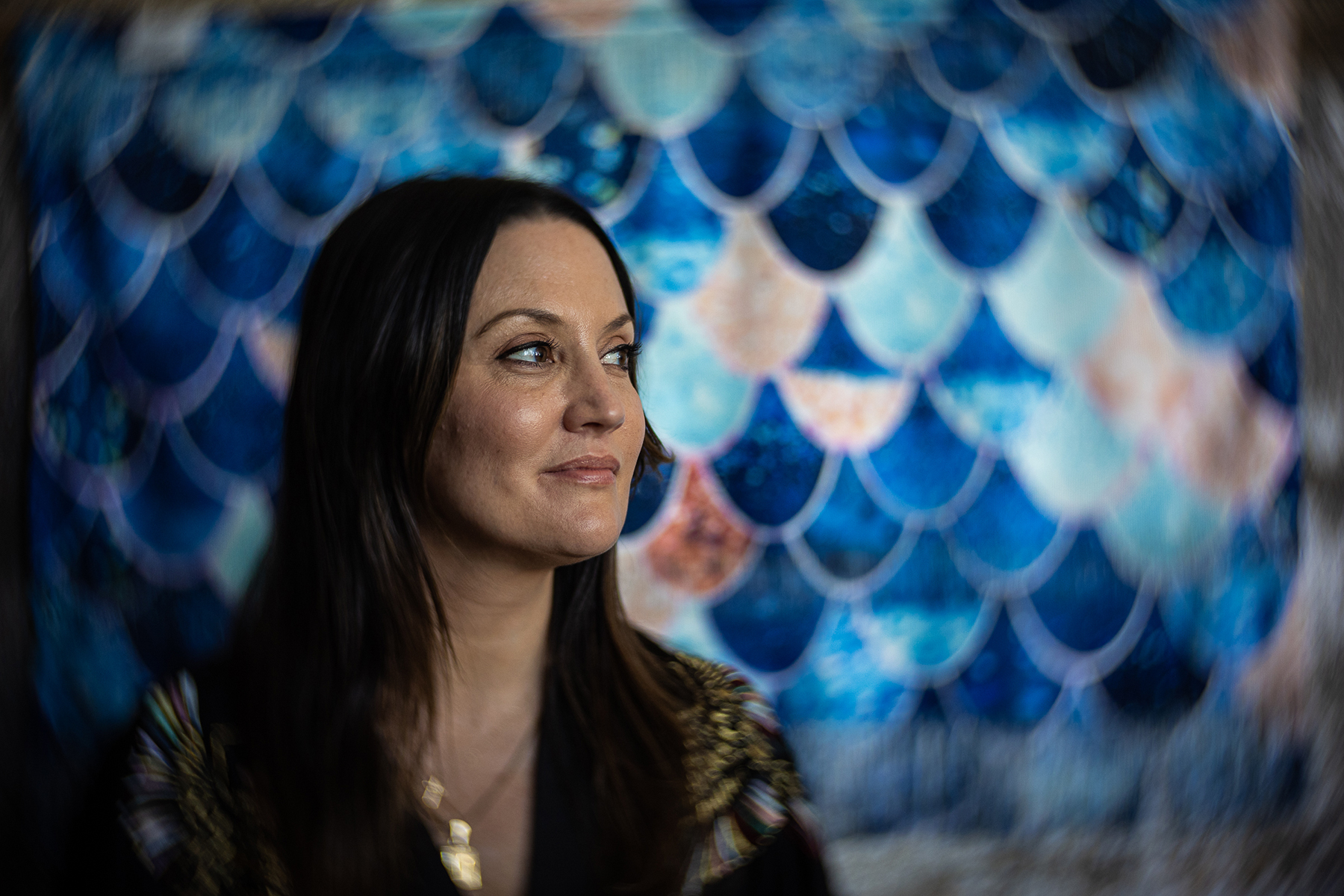 Two years ago, Natalie Hemby was part of one of Newport’s most memorable recent moments: the first-ever full set from the Highwomen. Hemby stood on that same stage on Saturday to debut the bulk of Pins and Needles, her forthcoming solo LP. Backed by an ace band of Nashville pros, Hemby delivered instantly memorable new tunes like “Heart Condition,” “New Madrid,” and “Radio Silence.” In between songs, she spun humorous stories about rooming with Maren Morris on a writers’ retreat and getting pitched on Brandi Carlile to join the Highwomen. She dedicated “This Town Still Talks About You,” a highlight from her understated 2017 debut, Puxico, to the late John Prine, before closing her set with a smattering of recent hits by Kacey Musgraves (“Rainbow”) and Miranda Lambert (“Bluebird”).

Serving as this year’s treasured elder statesman at Newport, Randy Newman delivered a typically powerful 19-song solo-piano set on Saturday afternoon, blending his signature mix of intentionally inscrutable ambiguity, caustic satire, and gorgeously wounded romanticism. The festival marked Newman’s first return to the stage since the pandemic, and the 77-year-old singer-songwriter made a humorous display of his rustiness, barking at his fingers and grumbling to himself when temporarily forgetting a verse here and there. But his career-spanning set was a master class in character-driven songwriting, touching on classics (“Sail Away,” “Birmingham”), rarities (“Same Girl”), and crowd-pleasers (“You’ve Got a Friend in Me”). When Newman became frustrated by a foghorn blowing incessantly in the harbor, he simply decided to play a song — “Jolly Coppers on Parade” — in the same key.

Jason Isbell Highlights His Past Decade of 400 Unit Tunes

“So much better than Nashville, I’ll tell you,” Isbell said of the musical representation at Newport Folk during his Saturday-evening set. At a festival with a very well-defined Nashville-to-Newport pipeline, Isbell used his headlining set as a pared-down acoustic showcase for his past decade of solo work, a period in which he’s established himself as the paragon of rootsy Nashville artistry. Performing as a trio alongside guitarist Sadler Vaden and fiddler Amanda Shires, both regular members of his 400 Unit, Isbell’s set brought to mind his and Shires’ freewheeling 2020 I So Lounging quarantine livestreams, full of stretched-out instrumentals (“What’ve I Done to Help”), heretical banter (“To be honest with you, nobody wants to hear a harmonica …”), and close attention to craft. But no moment proved more cathartic than when Isbell arrived at 2017’s “Hope the High Road”: “Last year was a son of a bitch/For nearly everyone we know.” 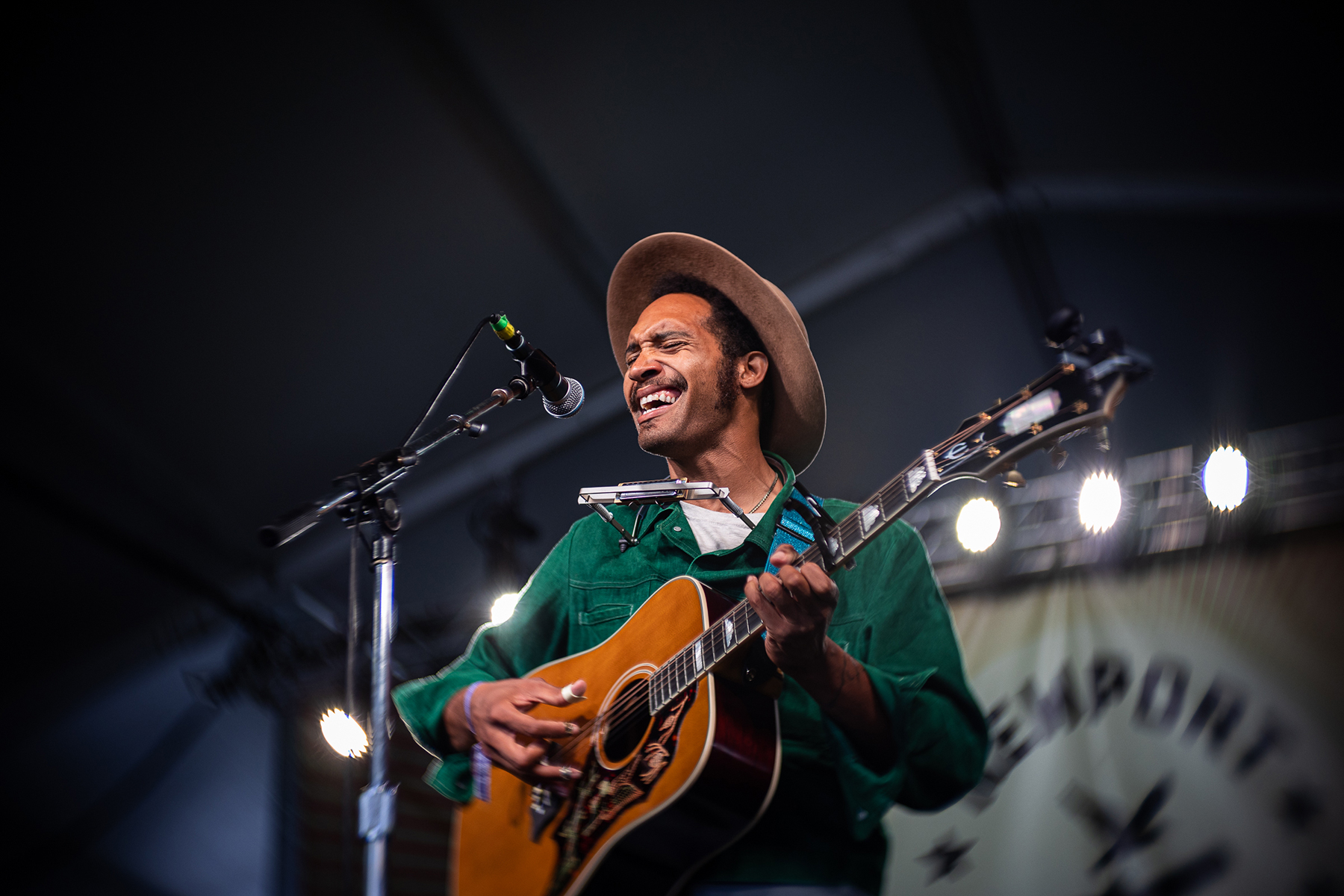 The first Newport to take place since the passing of John Prine was filled with touching tributes to the late legend, from Prine’s son Tommy Prine making his own festival debut to Margo Price and Andrew Bird performing “Angel From Montgomery.” Add to that the opening of Tré Burt’s Sunday-morning set, when the singer-songwriter offered a note-perfect take on Prine’s “The Late John Garfield Blues,” from 1972’s Diamonds in the Rough. It was an apt choice for Burt, who offered a moving solo set — and one of the weekend’s most traditionally folky — on a drizzly morning (“I’m glad it’s a little gloomy today because all my songs are sad”). Burt previewed his upcoming LP, You, Yeah, You, shared some of his signature tunes (“Undead God of War”), and brought the crowd to its feet with his starkly topical Black Lives Matter ballad “Under the Devil’s Knee.” It was a powerful and moving debut from a singer poised to become a folk-festival mainstay for years to come.

For her performance, billed as “Gentle Times W/ Erin Rae & Friends,” the singer-songwriter invited a rotating cast of special guests for a compelling covers set that resisted nostalgia and reimagined the typical folk-oldies canon. Joined by everyone from Aoife O’Donovan and Haley Heynderickx to Nathaniel Rateliff and Hiss Golden Messenger’s M.C. Taylor, Rae and Co. highlighted gems by artists like Marc Benno, Karen Dalton, Kathy Heideman, and Sandy Denny. Rateliff and Rae’s take on Link Wray’s “Falling Rain” was a gorgeous midset highlight, followed shortly after by Rae inviting Taylor to perform an emotional version of Curtis Mayfield’s “People Get Ready.” For a festival that centers on collaboration and honoring the past, Rae’s surprising and thoughtful set was a tribute to both a generation of forgotten pioneers and her own deep listening. 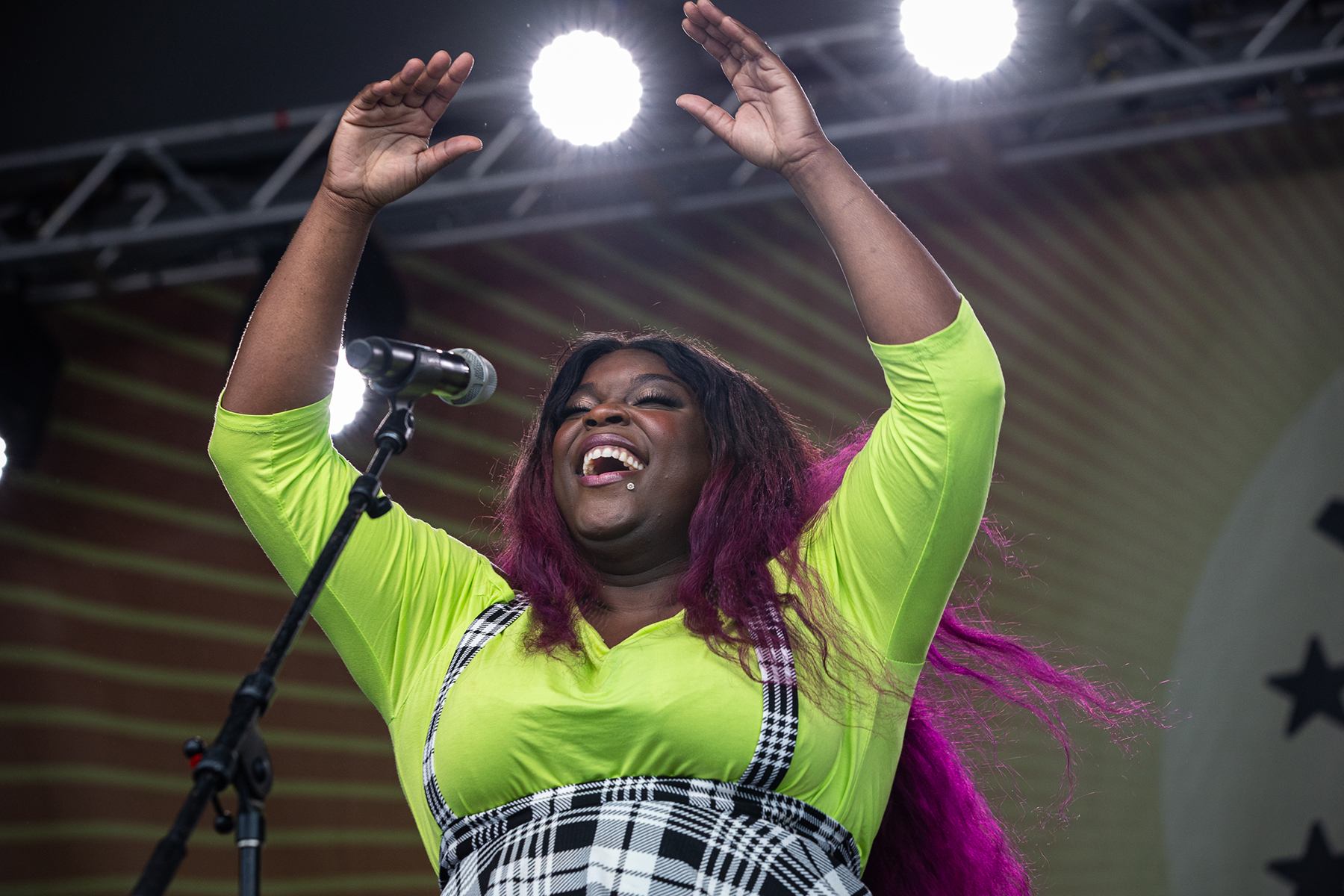 A lot has happened for Yola in the two years since the singer-songwriter first performed at Newport: a Best New Artist Grammy nomination, a role in the upcoming Elvis biopic, and a highly anticipated second album in the can. So it made sense that Yola’s Sunday-afternoon performance was the weekend’s most undeniable star-making solo showcase, a tour de force of showmanship and pacing that sprinkled in a few covers and debut-album standbys while showcasing songs from her new album, Stand for Myself, out this week. Yola was joined by Natalie Hemby for a spirited duet on the disco-leaning “Dancing Away in Tears,” Brandi Carlile for the feel-good “Be My Friend,” and, most thrillingly, the multi-instrumentalist and songwriter Celisse, who added transcendent guitar work to the album’s title track. It was a triumphant hour from an artist in full control of her own rapidly ascendant path. 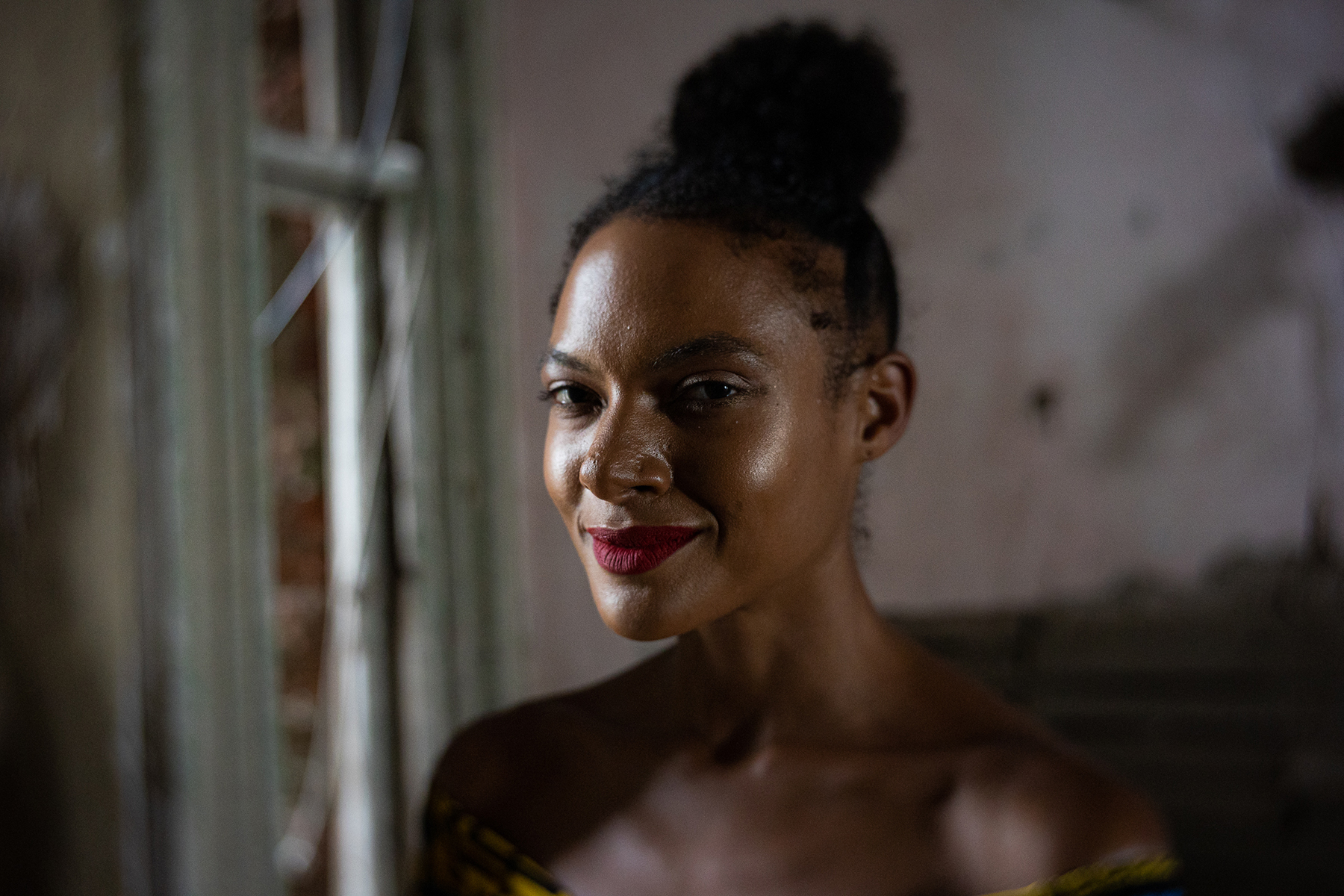 The clear highlight of the festival’s first three days came during the final performance, when singer-songwriter Allison Russell served as master of ceremonies for a carefully curated set titled “Once and Future Sounds.” Russell used the opportunity to showcase a slew of vital, predominantly black, and all-female roots-music voices — from Kyshona, Celisse, and Joy Oladokun to Sunny War, Kam Franklin, and Amythyst Kiah — giving the artists a meaningful main-stage platform at the very instant Russell has finally been given her own. The entire set was an overwhelming display of artistic generosity and thoughtfulness, from Margo Price leading a Tina Turner–inspired ensemble cover of the Beatles’ “Help” to Adia Victoria’s stirring “South Gotta Change” to writer and poet Caroline Randall Williams’ series of spoken-word performances (“Oh, great white gaze,” she asked in her first poem, “where are you hiding?”) All of this preceded the weekend’s biggest, and most joyful, surprise: Chaka Khan appearing out of nowhere to close the weekend with her eternal “Ain’t Nobody” and “I’m Every Woman,” which played like folk standards as much as tunes like “Goodnight Irene.” Russell’s curated set felt like a blueprint and a road map, redefining the legacies of the festival’s past while expanding the possibilities for its future.