This is the first installment of Rolling Stone‘s Music in Crisis series, which looks at how people all across the music industry are coping with the coronavirus pandemic.

In early March, Toni Globis and Brandon Burney were planning for a busy few months ahead. The couple were part of the crew for “A Bowie Celebration: The David Bowie Alumni Tour,” which reunited key members of Bowie’s bands — including pianist Mike Garson, bassist Carmine Rojas, and guitarist Gerry Leonard — to perform his classics and deep cuts. Globis worked on lighting, costumes, and stage effects, Burney as stage manager and guitar tech. Once the tour wrapped up in the spring, they had months of road work scheduled, together and separately, with 3 Doors Down and a tour of classic Jethro Tull music played by founding guitarist Martin Barre. Altogether, they were looking forward to making about $45,000 over the next five months. But after the coronavirus pandemic shut down the concert industry, their lives were thrown into turmoil.

Globis, 37, and Burney, 42, met at the Rocklahoma festival in Oklahoma in 2016. Burney was working for 3 Doors Down and Globis was helping bands load in and out of the festival. They currently live in a rental house in Raleigh, North Carolina. Globis spoke with Rolling Stone about how COVID-19 has impacted their lives.

Life as a Covid-19 Long-Termer

We heard about the virus on the news around the time I got the call to go to L.A. for rehearsals for the Bowie tour. It was the third or fourth time they’ve done the tour, but this was the first time they were going to do it on so big a scale. There were two buses with trailers and backdrops and lights.

We were in Portland [Oregon] on March 11th, the sixth show on the tour. We were in the middle of the show, so it’s not like we had a live news feed going. As we were loading our gear into our truck afterwards, the building was being shut down. They were closing down the box-office cages. Our boss was saying, “Shit, what’s happening?”

We heard the next show, in Seattle, was canceled. We decided to go to Seattle anyway, because the show after that was in Canada. We drove and woke up that morning and found out that the show in Canada was canceled too. We didn’t cancel or stop the shows ourselves. It was the venues that said, “Nope.”

We went to get breakfast and got a call from management saying, “The tour is canceled.” We rushed back to the hotel, and it was all about immediately getting a flight out. Everyone had to unpack the gear so we could all get our personal stuff out, and then go back to L.A. or Oklahoma or Nashville or wherever people had to go.

While we were at the airport, I got word that the Barre Tull tour I was going to work on next was also postponed. I also found out a bunch of festivals I would normally work every year weren’t on. All the local venues where I work have shut down. I lost six jobs in a day.

It took us three days to get home because of the flights. We had prepared our house to be empty for six weeks. So we didn’t have any food that would have gone bad in that time. We keep a small stash of dried goods, but we were not expecting to be home two weeks after emptying out our fridge. 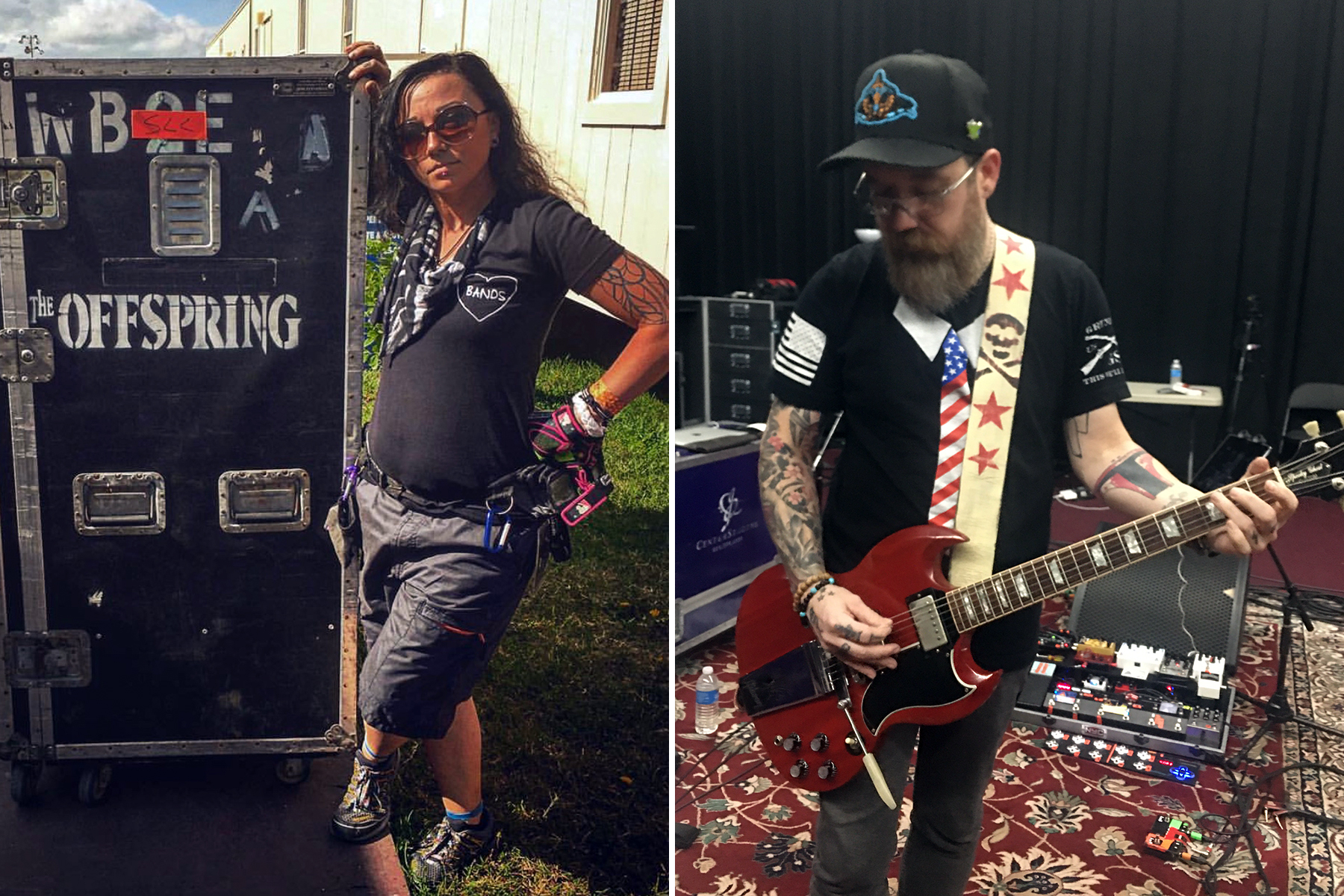 Globis and Burney on the job. Photographs courtesy of the subjects.

In normal times, you can plan your year: “I have this tour for these three weeks, then nine shows at my local venue, then a six-week run with these guys, and then I can jump to a few festivals.” But with this situation you can’t. Usually you can at least make extra money. You can load trucks at the local arena for whatever show is coming in. But there’s no money to make. For local venues, everybody keeps saying “tentatively”: “We’re tentatively shooting for July.” But no one has said they’re going to officially open on this or that day.

Right now, I don’t have work until July. That’s when we’re supposed to do the 3 Doors Down tour. I’m knocking on wood right now, hoping we’ll be on that tour this summer. The Bowie tour is saying they’re rescheduling for September. I don’t know if it means I’m still on the crew or not. They made an announcement and we were like, “Cool, maybe we have work in September.” The Tull tour is supposed to be rescheduled for September too.

We’re straight freelancers. We’re not in the union. Most touring crews are nonunion, especially for rock & roll. If you’re talking Broadway or touring productions of Cats, those usually are union. I could join the union here, but all the union people are in the same position now anyway.

I want to work. People say, “Why don’t you work at the grocery store?” But they’re not hiring. I’m not opposed to waitressing. But that’s not an option either. The options are shipping and receiving, grocery stores, and Home Depot. I will work wherever I can to pay the bills. My job is loading and unloading trucks. I can work at Home Depot, no problem. But you have to be bilingual for those jobs, and unfortunately I’m not. Even the unemployment center said, “You need to find a job.” I said, “Where? No one’s open and they’re not hiring.”

Burney is getting unemployment, about $300-something a week. I still don’t have unemployment. There are 100,000 people trying to use the system all at once, and the website is bogging down and crashing and pages are reloading. Somehow I clicked something wrong and it registered that I turned down work, which I didn’t do. It keeps giving me an error code and saying I should give it to whoever answers the phone, but if you call, they say they’re not accepting calls and you need to go online.

We have a little bank money here and there. We were able to get in some work before all this happened, so we’re floating a bit on our off-season money. But we don’t have enough for the next off-season. We’ve been pulling from that fund but not able to put back into it. So we’ve been doing things a little bit differently. Once a week we’d usually have an outing — go to the beach or to a museum downtown. We can’t go out anyway, but even if we could, that wouldn’t be an option in the current budget situation.

I like to think I’m handling this as well as I can. As touring people, I have sacrificed a lot in my life for the sake of a show. I’ve given up funerals, birthdays, weddings, and all sorts of things. Between now and July I have to figure out how we make my car payments and rent and feed ourselves. Unless we both get unemployment, we don’t qualify to buy the house we want to buy because you have to show income. I have some time to work on things, to clean my house. And I’m working on a sewing pile. But it’s terrifying.